Hundreds of students flocked to Wellington for the 30th anniversary of a national Shakespeare festival, speaking their truth through the timeless wisdom of the Bard. We asked the question, what is his relevance in today’s learning environment? 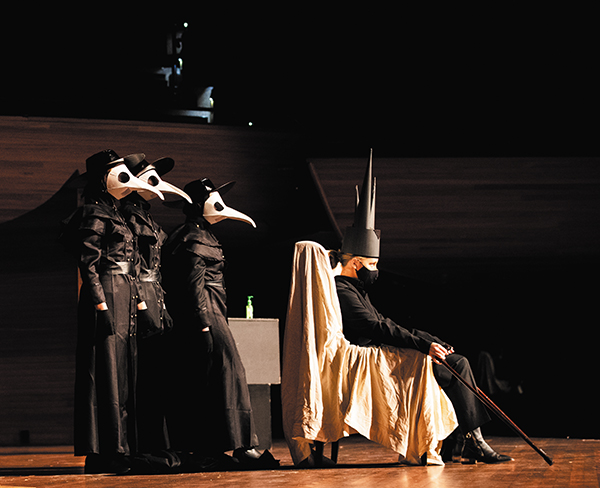 Dawn Sanders remembers what it was like in 1991 when she first started the University of Otago Sheilah Winn Shakespeare Festival: students standing nervously in rows or semi-circles on stage, awkward and stilted in their delivery of lines, arms held rigidly at their sides.

But now, 30 years later, hundreds of students travel to Wellington each year for the two-day national festival to deliver scenes that pulse with colour and imagination.

The benefits of participating are as ageless as the scenes they deliver, says Dawn, CEO and founder of both the Shakespeare Globe Centre New Zealand and its Shakespeare Festival.

“With over 128,000 students having participated in our festivals over the past 30 years,” Dawn explains, “plus another 6,000 in our other programmes, following the trajectories of their lives endorses the benefits of the life skills they gain.

“Careers are forged not only in all forms of the arts, but in the transferable skills gained, including communication, close reading, interaction and reaction, serving as sound foundations for lawyers, teachers, doctors, journalists, politicians – to name but a few.”

Because Shakespeare writes of the challenges of interpersonal relationships and confronting issues and conflict through social, political, religious, historical and myriad other lenses, Dawn is firm that the relevance of his works are timeless.

“Where the infected pestilence did reign”

Students are stunned when they realise Shakespeare was born in lockdown, says Dawn.

It was April 1564, mere months after the bubonic plague had resurfaced to once again tear through England. But as good luck would have it, the young William Shakespeare wasn’t among those who perished from plague.
A third of those in his hometown, Stratford-upon-Avon, weren’t so lucky.

Dawn says the backdrop of Covid-19 has made Shakespeare even more pertinent.

She gives the example of Romeo and Juliet, in which Friar John was quarantined because of an outbreak of the plague, stopping him from passing on the life-saving message to Romeo that Juliet still lived. 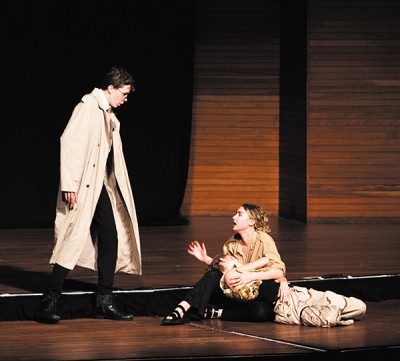 Given the Alert Level restrictions we’re now all so familiar with, this historical context has made the ever-popular Bard even more relevant to today’s teens. “They just get it,” says Dawn, simply.

But she also believes the topics, themes and characters of Shakespeare’s plays have always been universally felt and understood.

“Shakespeare has never been more relevant. He’s about tapping into what makes us human, and our shared, common experience,” says Andrew.

“Characters from all walks of life and many different cultures tread the boards to share in laughter, tragedy, love, and hate. The same core human emotions are felt by all of them – Shakespeare points out our shared humanity and asks us to embody it, if only for the duration of a scene.”

King’s High School performed a 15-minute excerpt from Romeo and Juliet at this year’s festival, which won two awards.

“Because Romeo and Juliet primarily deals with youths and their families, it is particularly accessible to students,” says Andrew.

The bridge between worlds 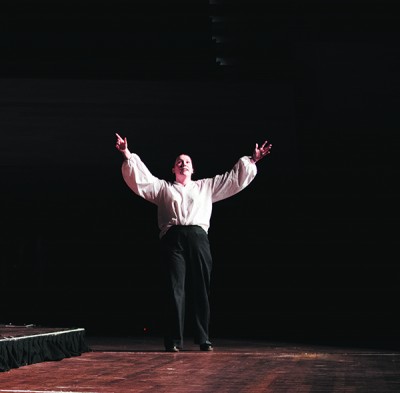 This bridge between Shakespeare and modern life is nowhere as evident as in the scenes students themselves creatively re-tell.

There are no limits to the time, place, people, or costuming – just that the words used are the Bard’s.

“For instance, at the National Festival this year I saw an extraordinary five-minute scene from Hamlet by students at Tauranga Girls’ College. They presented excerpts exploring Ophelia’s descent into madness and expressed her mental breakdown through the metaphor of a simple large white box.

“They put her in and out of the box, turned it around, dragged it back and forth, rapped and banged on it, whispered in it, stroked it and eventually shut her in it at the end. It was such a powerful and memorable way to communicate a mental health issue that every New Zealander will have a connection to,” he says.

Shakespeare in the classroom

“They encounter radical difference in the language and poetry of the characters, but as they work to engage with and embody the text, they grow to learn more about what they have in common with these characters rather than with what makes them different.

“They come to realise that, in many cases, Shakespeare offers them a vehicle to express their own truth, to make sense of their own world around them today,” he says.

This rings true for Dawn, who says students often tell her how much they enjoy the research into the text and how it’s not a superficial, lightweight story.

“Edward de Bono has a great analogy for learning. He says our usual brain patterns are like a commuter taking the train home and then walking from the station back to their house. Same thing, different day. Learning happens when you miss your usual train station and must find your way back to your house from this new place. A new neural pathway is formed.

“Shakespeare offers students exactly that. His heightened language and poetic structures ask us to find our way back to the familiar, to the known, but from a different train station. He is the ultimate humanities teacher.”

The students who present Shakespeare scenes at the festival are forced to grow, says Andrew.

“Those who get a taste of the National Festival usually work very hard to gain a place the next year: it is a life-changing experience that they hunger for,” he concludes. 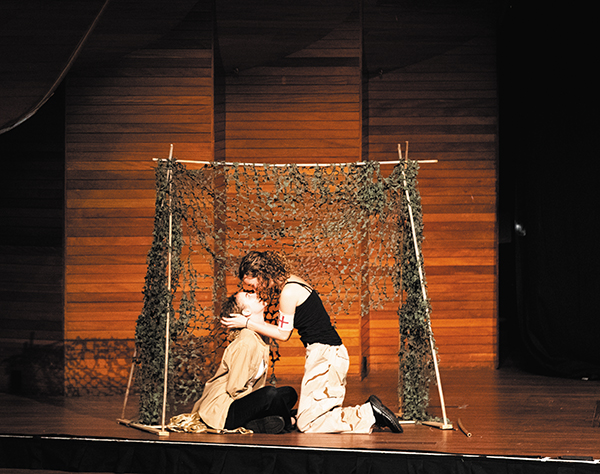 Wellington High School's Ursula and Brooke as Achilles and Patroclus in Troilus and Cressida.

What the student actors from this year’s King’s High School cast have to say about Shakespeare:

What do you enjoy about Shakespeare?

Lucy (Y12): How vivid of a picture it paints in my head and allows myself to enter almost another world.

Daniel (Y12): The performance aspect. The feeling of everything coming together; this includes the idea of the theme and insight of the text, to how this is presented on stage.

Zac (Y12): How each character can be interpreted in so many different ways. The characters are also all so diverse and different, with their own motives and morals that enhance how interesting a scene or character can be.

What is your favourite play?

Casey (Y11): Macbeth because of the dark and mysterious tone of the play.

John (Y11): Romeo and Juliet because it’s surprisingly violent and barbaric. A strong contrast to its stereotypical depiction.

Zac (Y12): Titus Andronicus. It’s just such a fun play. It was released with criticism for being the most violent play any Elizabethan audience member had ever seen. Shakespeare essentially went “I don’t care, let’s just scar the audience” and showed them more blood and death and violence than ever before.

What did you learn from taking part in the festival?

Casey (Y11): The use of projecting your voice even though I didn’t have a speaking role. And the use of the space because how big the stage was. And to learn with and work with new people I haven’t worked with before.

Daniel (Y12): The variety of ways one can present Shakespeare. But also, most importantly, how other people interpret the text, and their specific passions and views.

Zac (Y12): What I learnt most about my preparation for performing on stage is how supressing an emotion on stage is far more powerful as an audience member to see. It taught me that if I can try to supress the emotion in my dialogue, that I can search for a whole range of subtle emotions that you cannot find on the surface level.

Aside from the play itself, what did your group learn as part of this process?

John (Y11): How to work as a team player. Throughout the festival we were always helping each other practice lines and actions. It created a really good atmosphere for us to extend our acting ability and created a strong, unbreakable bond between the lads who took part.

Daniel (Y12): The importance of the understanding of the text. For when it comes down to it, anyone can perform Shakespeare, all they have to do is recite the lines. So understanding the intention and the tension of the scenes, help you act as a team player by supporting others, instead of trying to steal the show.

Cullan (Y12): I believe our team learnt a really valuable lesson about the energy you carry onto the stage at the beginning of the piece. We looked at how it can shape your entire scene to be a really moving piece with noticeable meaning or a boring and confusing scene. The point where we really took this into consideration was when we were about to go onto stage to perform for nationals but we weren’t as confident as normal so we started our rap together and bounced up and down vibing with each other until we had to go on, which turned out great as we performed with really good energy and physicality. 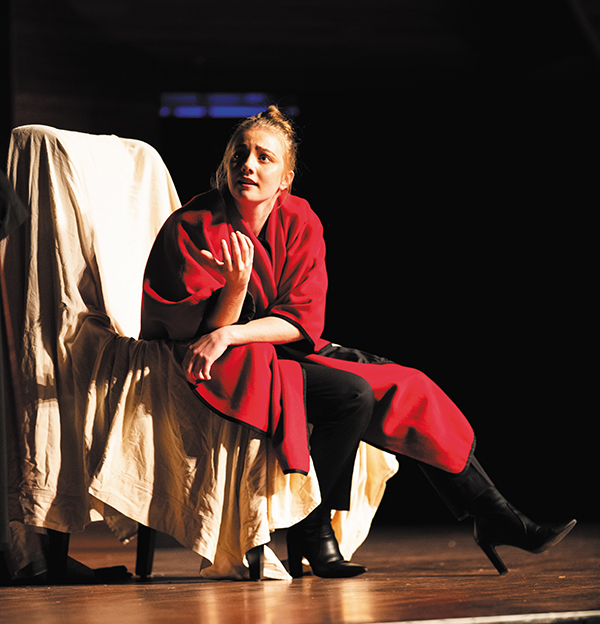