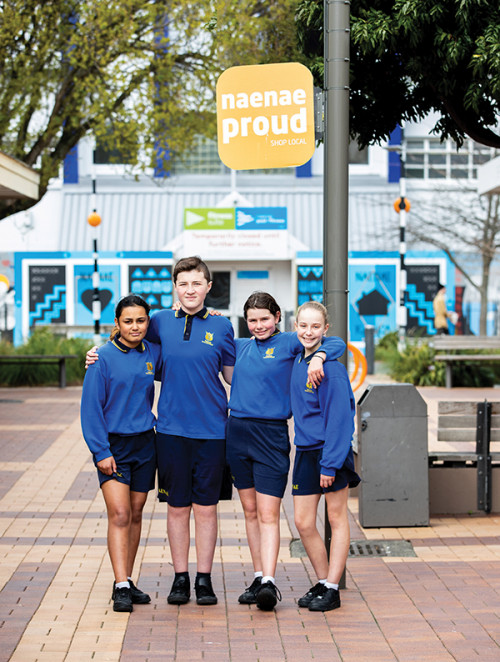 Katiah, Kobe, Holly and Tui out and about in Naenae, with the closed swimming pool in the background.

When Naenae’s town pool was found to be earthquake prone and was closed in 2019, plans for an adjacent multi-purpose community hub were brought to a screeching halt, leaving the Lower Hutt suburb’s children and young people with few recreational options.

However, the closure provided students from Room 12 at Naenae Intermediate with an opportunity to develop a child-focused redesign of their town centre with the help of Te Papa’s Raranga Matihiko|Weaving Digital Futures team.

“When the pool closed, that took away a lot of their social activities. We have kids who have never been to Te Papa,” says class teacher Kelly Steere.

“We’re a low socioeconomic area and the pool was a destination: they went there after school and at weekends. A lot of them would go to the pool, get some fish and chips afterward. I guess once the pool has gone, what else is there for them to do?”

Redesigning the Naenae township, including a new pool, was a captivating authentic context with a clear local curriculum focus for the students in Room 12 in the last term of 2019. The recentness of the pool closure engaged and motivated the students – and they got results.

“We’re an inquiry-based school; our inquiry last year was ‘Te Awa Kairangi [Hutt River]: what is our future?’”

The Year 7 and 8 class attended two workshops at Te Papa’s Learning Lab as part of its museum and digital technology education programme.

Raranga Matihiko facilitators showed the tamariki how to use various digital tools to activate their thinking and set the scene around urban development. Digital tools included a ‘heat’ map to show population density and why people live where they live, participating in a live poll (pollev.com(external link)) to share what they value when building and designing a township, and researching design and innovation in community centres and pools around the world.

“When we spoke to Alisha (Spekking, a facilitator), I said I needed a tool that the children would be able to use back in the classroom, so I didn’t want her to talk about robots because we don’t have them.

“But we have 15 Chromebooks in a class so the students can buddy up with someone. She suggested Tinkercad, the free online 3D digital drawing tool, so that the students would be able to learn how to use it at the Learning Lab and then be able to use it in the classroom setting,” says Kelly.

“They were able to show us what tools we could use to meet Digital Technologies and Hangarau Matihiko (DT&HM) curriculum objectives and how you could interweave that into other curriculum areas. They showed us that you don’t need computers to meet digitech objectives – you can be doing that with everyday activities.

“For example, one activity involves some students being blindfolded and other students giving them short sharp precise instructions to get to the school canteen – that teaches computational thinking,” says Kelly, who is digital lead at the school. 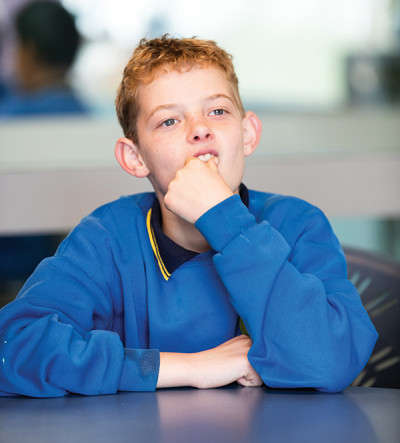 Jacob and his classmates talked about their vision for their suburb.

The students enjoyed using the digital tools because they were able to bring their ideas to life and select what would make Naenae a better place for young people. As well as learning to use a range of digital tools, students did face-to-face interviews with Naenae business owners to find out about the impact of the pool closure.

“There’s a lawnmower man who’s been there for a long time and he said he’s been fine because people come to him to get their lawn mower fixed. But people can go anywhere for fish and chips –
it was fascinating to have that firsthand account from shopkeepers who said they had seen such a downturn in business because people weren’t coming to the town centre to go to the pool and getting tea afterwards.”

Scientists have produced a vision of a city in 2050 as part of Te Papa’s new $12 million exhibition zone: Te Taiao Nature. Mentors from Raranga Matihiko had discussions with students about urban sprawl and its impact on populations. They also explored how cities are moving towards establishing sustainable environments within urban areas.

“The children wanted to make Naenae great again. They had lost the supermarket; a lot of shops had gone. The fact is that most of these students are limited by their resources, so they need to walk everywhere. They might have a bike but they certainly don’t have transport at the ready like some others,” says Kelly.

Back to the drawing board

“Sketchup is really similar to Tinkercad, but it enabled them to be more specific in what they are trying to create. They were given choice about how they did their drawing: one student drew a concept drawing and then from the concept he went to Sketchup,” explains Kelly.

Some of the girls wrote to Lower Hutt’s mayor, Campbell Barry, who was so impressed with their work that he visited the class.

“It gave them some empowerment. I think they were proud of the fact that the mayor came and was listening to them and was really genuine in understanding where they were coming from. One of the girls said to him: ‘Naenae’s a great place. We need you to take our concerns seriously’,” remembers Kelly.

Prime Minister, Jacinda Ardern’s visit to Naenae in July to announce a grant for the rebuild of the Naenae Pool also resonated with the students.

“For them, that was a real resolution in the sense that in their minds, they spoke to the mayor and the PM was involved and said the Naenae Pool will be redeveloped and reopened.”

While Kelly’s class is currently exploring a different topic, she feels there are a lot of rich learning opportunities within the topic of Te Awa Kairangi: what is our future?

“I would love to do this Inquiry topic again – it was so good. It was powerful and engaging for the students and at the right time. I think it wouldn’t have engaged them so much if the pool hadn’t closed and taken away something that was vital to them,” she says.

The Raranga Matihiko|Weaving Digital Futures programme offers relevant digital technologies curriculum content learning to those with limited learning opportunities in this area, as part of the Ministry of Education Digital Technologies for All Equity Fund. 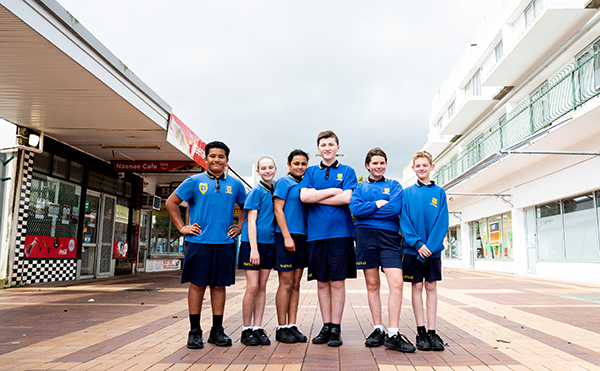 Learning about their suburb and the issues it faces, from left: Sione, Tui, Katiah, Kobe, Jacob and Hope.

Youth vision for their suburb

On the day Education Gazette visited Naenae, a cold wind blew through the pedestrian precinct, Hillary Court. A lone busker was singing, there were a higher than average number of mobility scooters, people passed through. A butcher’s shop was empty, another shop that offered coffee and a doughnut for $1 was closed and operated for limited hours. There’s a trendy café and Te Puna Manawa, a church-run community drop-in centre, invites people to cut fresh herbs from pavement planter boxes.

Some of last year’s Year 7s, now in Year 8, told us about the Raranga Matihiko project, which saw some students focus on the future of Naenae’s town centre, while others explored topics such as climate change, palm oil and the future of food.

Students discovered that the closure of the pool had impacted local businesses.

“Lots of shops have closed because of the pool closing. When we went last year, there was nothing in the shops. There was no-one in Naenae.” says Jacob, 12.

“We had a day when we went into Naenae and we talked to all these business owners and because of the pool closure, they lost a lot of foot traffic that had come in from different places to the pool, so that’s why a lot of businesses had shut down. We felt that Naenae wasn’t vibrant and lively and didn’t have a lot of new things for young people to do. It just felt boring because after school there wasn’t really much for us to do,” says Hope, 13.

“It was quite obvious that the smaller businesses were struggling. It was quite sad to see that because in, like the 1950s, it was such a vibrant place, but now there are hardly any people and it’s quite dodgy and just dead. But I feel it could be so much more,” says Tui, 12.

Vision for their suburb

The five students interviewed all wanted more facilities for young people. Kobe, 13, would like skateboard parks and laser tag to bring more young people into the suburb.

“I want to see the pool back. I just want to swim – I went there a lot in the summer, and sometimes in the winter. I used to go after school and in the holidays,” says Sione, 12.

“I would like some more shops and parks to make it more fun and for more people to come to Naenae and to see what’s here,” says Katiah, whose grandfather, Mark, gives away free sausages each week. “He just wants to bring the community together.”

Last year’s Room 12 students have learned how to use a range of digital tools and say: ‘it’s really cool to be learning new stuff all the time’.

“We went to Te Papa for two days and we did a little project with Sketchup and that was quite fun because we could explore and create anything we wanted to do with Naenae. Me and Hope created a pool and a movie theatre, supermarket. This year we are starting to learn to use Tinkercad and Ben in our class has been making plans, so you can make all sorts of stuff,” says Tui.

“Me and Ben have been working on a project for quite a few days: we are making a city and stuff like that,” adds Jacob.

The students have used Chromebooks to research subjects; a group used Kahoot to make a quiz to inform the class about palm oil, along with a short iMovie about Doritos and palm oil.

“I used the Chromebook to research climate change and did a Google slide show about it,” says Sione.

“This year we are starting to use Google forms so we sent out a survey to the whole school,” says Hope.

Tui and Hope wrote the letter to the mayor “because we were just thinking how important it was to explain how we urgently wanted something to happen in Naenae – anything. And he actually came and visited us. He talked to us and asked us questions and we told him everything we wanted and we gave him our ideas,” says Tui.

The Room 12 students could make decisions about creating, manipulating, storing, retrieving, sharing and testing digital content using Sketchbook and Sketchup when designing their concepts. This was an authentic local context. They took into account the end users (young locals and retailers) and gave feedback to wider stakeholders like the mayor.