Music teacher Henare Kaa is supporting his talented students to get a taste of the music industry, with their latest project hitting the New Zealand Music Top 10 Te Reo Māori Singles Chart, and the Hot NZ Singles Chart. 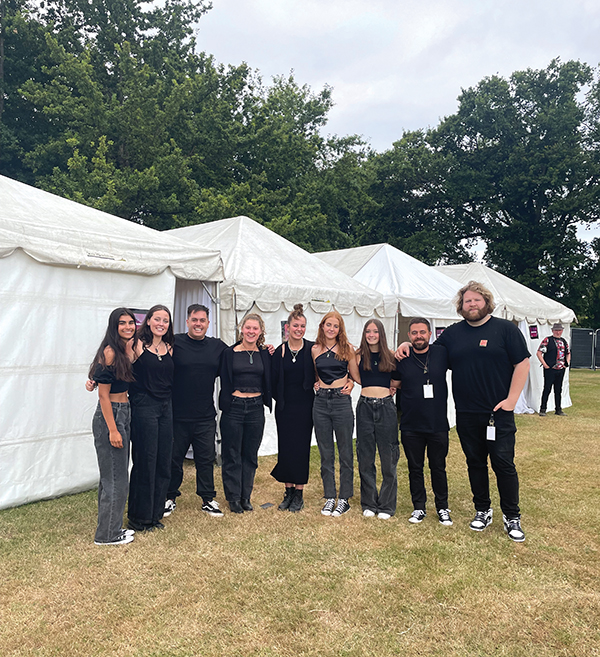 Life itself is one big classroom, says Henare Kaa.

A music teacher at Christchurch’s Rangi Ruru Girls’ School, Henare spends his days outside of the classroom performing in the band Dillastrate.

At the beginning of February, the band’s song  Tāwara Ana was number 10 on the official New Zealand Music Top 10 Te Reo Māori Singles Chart. It was also number 12 on the Hot NZ Singles Chart.

Tāwara Ana, with te reo Māori lyrics, was based on the original Dillastrate song, Party in My Head.

“It’s about me having ADHD and celebrating the party that is always going on in someone with a hyperactive mind,” says Henare.

Henare wrote the song, which was then translated into te reo Māori by Te Reo Tautito for Māori Language Week.

Taking the song into the studio, he matched the background music from Party in My Head, with the new te reo lyrics. He involved New Zealand producer Black Comet and Laughton Kora (from the well-known band Kora).

Henare says they wanted to give the song a unique point of difference – and that was where his music class came in.

Supported by Henare, the Rangi Ruru students stepped outside of their comfort zones and into the recording studio.

“I wanted to show them they are capable and they have the ability and potential to do amazing things,” he says.

The students ended up contributing improvised vocal lines and group vocals to the song.

Student Maggie Craw says it was intimidating in the recording booth with everyone looking in.

“But it’s so satisfying afterwards hearing the final version on Spotify. The fact that this song is now in the Top 10 is just a bonus,” she says.

“I mix my mahi in the music industry with the mahi I do at school and so every opportunity I can involve the students in, I do,” adds Henare.

Mixing with the music industry

Musicians have visited the class sharing what it’s like to be a working artist in the New Zealand scene. The students have spent an afternoon with LAB going through their soundcheck at Horncastle Arena. They’ve also hung out with Shapeshifter and Tiki Taane behind the scenes.

“I’m very fortunate to have a group of very talented wāhine  who are able to sing and perform at such a high level,” says Henare.

“Giving them the opportunity to be a part of the waiata, it’s not just because they can, it’s because their involvement makes the song special.”

After putting the song together, Henare was approached by the Christchurch Symphony Orchestra, who arranged the song for the Sparks in the Park concert.

Three chamber music students also performed with the group at the Christchurch Town Hall for the Go Live! Festival.

Henare says this was another opportunity to feature his students, but this time, live on stage.

The group performed with Dillastrate in front of tens of thousands of people crowded into Hagley Park.

“Unreal.” “Insane.” “Amazing,” are the words used by the students describing the experience.

“The lesson here is not just about the performance but it’s about learning to work as a group knowing that when you step out onto the stage and there’s a huge crowd looking back at you, you understand that, okay, I’m up because I can be up here,’ and ‘I’m up here because I have the skill, it doesn’t really matter that I may be young and less experienced, I’ve got the opportunity. The music and having fun is what entertains people,” says Henare.

Maggie adds that being on stage wasn’t even scary as they were all together.

“It was so nice to be on the stage with some friends and sing. The view was also so cool, looking out at all the people was so unique.

“I’ve learned how good it is to say yes to opportunities because it always ends up being super fun,” she says.

The students also got to see how background operations work at a music festival, interacting with the Christchurch City Council and event team.

“When they go to festivals when they’re older, they will now have that perspective and appreciation for what goes on behind the scenes,” says Henare.

Henare says one of the best parts was the song hitting the charts with its te reo Māori lyrics.

Henare says he looks back on his musical career and wishes he had similar opportunities when he was at school.

“It’s about providing students with real-life opportunities. They’re just as beneficial, if not more beneficial, than being in front of a whiteboard.

“You’ve got to know your values and how to look after your hauora as well as be a good performing musician,” he says.

Henare wants to make it easier for young musicians hoping to be the future faces of the New Zealand music scene.

“I think it’s only fair that I share what I have with our rangatahi. When you can put what you’ve learned in the classroom into practice, you learn so much more. It helps you to understand if a certain career is what you actually want to follow and pursue.”

Henare adds that he would have loved to have learned that entertaining is primarily about working with others and having fun when he was at high school.

“Hopefully through these lessons, the students won’t have to go through some of the difficult stuff I went through to get to where I am. It’s about not being naive to the music industry,” he says.

“It’s important they know how to deal with disappointment and soldier on.”

Henare wanted his students to see just how enjoyable working in the music industry can be.

Student Lucy Aitken said through the process she now understands how to properly record music – something she hopes to do herself one day.

“I love songwriting and have written some of my own,” she says.

“It’s insane to think that something we did as a music class has made it to the charts.”

Listen to Tāwara Ana on YouTube(external link), or search for it on Spotify or Apple Music.

Hundreds of students flocked to Wellington for the 30th anniversary of a national Shakespeare festival, speaking their truth through the timeless wisdom.

Hundreds of students flocked to Wellington for the 30th anniversary of a national Shakespeare festival, speaking their truth through the timeless wisdom. Read more