Māori excellence and passion was at the heart of the 2022 Ngarimu VC and 28th (Māori) Battalion Memorial Scholarships award ceremony, which this year paid tribute to the late Tā Harawira Tiri Gardiner. 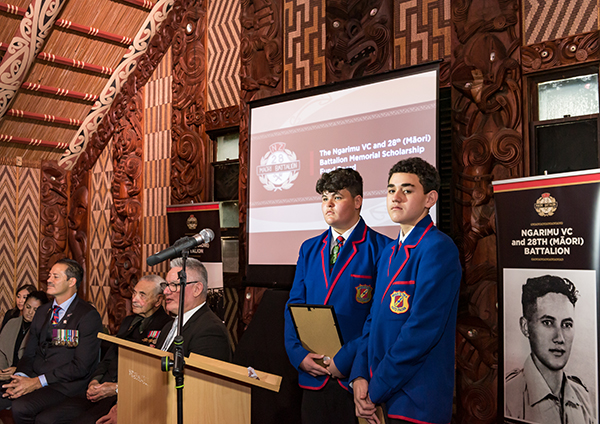 Typically held at Parliament, this was the first time the award ceremony was held outside of Te Whanganui-a-Tara Wellington.

The Waitangi Treaty Grounds were chosen as an acknowledgement of Sir Apirana Ngata and the seminal speech he gave to members of the 28th (Māori) Battalion before they departed for World War 2.

This year’s ceremony paid tribute to the late Tā Harawira Tiri Gardiner, a tireless advocate for his people and a former soldier in the New Zealand Army serving in Vietnam. Tā Wira Gardiner died on 17 March 2022.

Earlier in the day a pōwhiri took place in Te Whare Rūnanga where Ngapuhi welcomed members of Parliament representing Māori electorates, members of the Board, scholarship recipients and their whānau, as well as the Hon Hekia Parata, wife of the late Tā Wira Gardiner, and their daughter Mihimaraea.

The whānau of Tā Wira carried his kawe mate onto Te Whare Rūnanga to acknowledge and express their affections and grief for him. The pōwhiri gave attendees the opportunity to come together under one kaupapa and to pay tribute to the 28th Māori Battalion soldiers.

A pōwhiri took place in Te Whare Rūnanga where Ngapuhi welcomed members of Parliament representing Māori electorates, members of the Board, scholarship recipients and their whānau, as well as the Hon Hekia Parata, wife of the late Tā Wira Gardiner, and their daughter Mihimaraea.

A new video taonga display unit was launched at Te Rau Aroha – Waitangi Treaty Grounds to showcase the Ngarimu VC and 28th (Māori) Battalion video competition taonga. This taonga will also house the names and whakapapa of all scholarship winners over time.

The Te Rau Aroha Museum itself is dedicated to honouring the men and women who serve our country and includes a gallery that specifically acknowledges the 28th (Māori) Battalion’s A Company, most of whom whakapapa to Te Tai Tokerau.

The new video taonga was blessed by the Māori Anglican bishop for Te Tai Tokerau, Bishop Te Kitohi Pikaahu, and unveiled by Hon Hekia as a tribute to Tā Wira.

This was a significant part of the day as it was only a year ago that the Board paid special tribute to Tā Wira, bestowing him with the prestigious Manakura Leadership Award, an award that is only presented every three years. 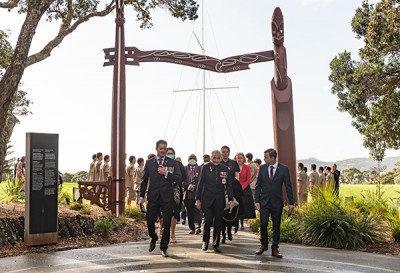 “It is the highest accolade in the Ngarimu VC and 28th (Māori) Battalion Memorial Scholarships and was awarded in recognition of his leadership, commitment and contribution demonstrated over the course of many years” said Associate Minister of Education (Māori), Hon Kelvin Davis.

Hon Hekia said she felt a responsibility to accept the invitation to unveil the new video taonga as she is a descendant of Ngarimu, a previous scholarship recipient, and the wife of Tā Wira. She acknowledged those who attended the event and their connections to the 28th (Māori) Battalion.

The exhibition helps bring to life the memories, courage and stories of the battalion members and creates a living legacy of their bravery and sacrifice.

These scholarships are awarded annually to exceptional Māori who are undertaking tertiary or vocational education and training, and who demonstrate leadership, a strong commitment to educational success and a desire to give back to their communities, whānau, hapū and iwi.

Stacey is studying towards a Master’s in Education Psychology at Te Herenga Waka – Victoria University of Wellington.

She hopes to become an education psychologist in the future and plans to give back to her community, the people she came from. She believes by completing her studies and achieving in her field of education psychology, she can help more tamariki and whānau in her area who need additional support to learn and enjoy their time in school.

Stacey is grateful to be a recipient of these prestigious awards and plans to focus her skills towards helping ākonga enrolled in public schooling and to be accessible to those who need it the most.

“I definitely benefit from this as it will help me advance in my career, and once I have the knowledge and skills required in my career, I’ll be able to help others. I want to give back here in Aotearoa with all the homes being built to help our people,” says Reimana Prescott (Ngāti Wehi Wehi, Ngāti Raukawa, Ngāti Kahungunu ki te Wairoa).

When asked who his role models are he says, “For the context of this award and my current state I would like to say my ancestors are important role models as they demonstrated selflessness and humility by going overseas to fight alongside our Pakeha allies in the world war. They were hardworking people, and these are the qualities I strive to possess in my daily life.”

Reimana has completed a New Zealand Certificate in Construction Trade Skills at Whitireia and has begun pursuing his apprenticeship towards being a qualified builder.

“The scholarship, I believe, will greatly assist me in achieving the goals and aspirations that I have,” says Reimana.

He hopes to continue to learn and gain in-depth skills within his field so that he can one day start his own business and help whānau Māori throughout Aotearoa New Zealand build houses.

Waituhia Elers-Metuamate was also awarded a scholarship and is completing a New Zealand Diploma in Beauty Therapy. She says the scholarship will enable her to complete her diploma and enhance her beauty therapy knowledge.

One day, Waituhia wants to open her own salon and would like to see more Māori representation in the beauty industry. Her personal achievements include “getting the scholarship and passing with flying colours in my beauty course as well as currently working at Studio 31.”

Proud to be Māori

The winners of the video award competition for secondary school students were celebrated alongside the Ngarimu VC and 28th (Māori) Battalion Memorial Scholarship recipients.

The videos created by ākonga from Hato Pāora and Te Kura Mana Māori o Whangaparāoa will be displayed on the new video taonga display unit housed in the legacy room at Te Rau Aroha within the Price of Citizenship, Te Utu o Te Kiriraraunga exhibition.

Willie Apiata VC was acknowledged at the award ceremony as a former Ngarimu VC and 28th (Māori) Battalion Scholarship recipient and the first recipient of the prestigious Victoria Cross for New Zealand.

Willie also concluded the day’s events with his own heartfelt speech about his time in the Army and how the scholarship recipients made him proud to be Māori. 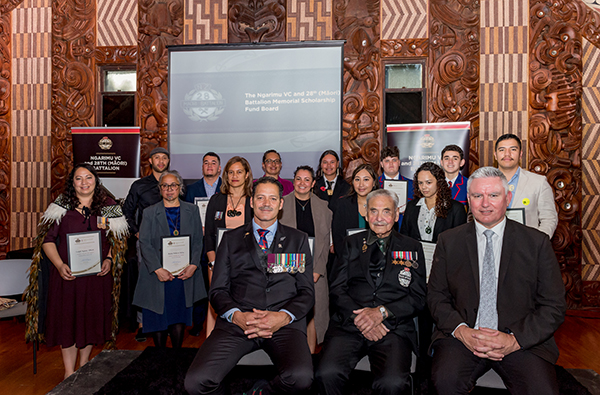 Find out more about the video award competition winners(external link).

Awards and scholarships Education to employment