The recent Tech21 Summit co-hosted by the Ministry of Education and NZTech aimed to inspire Māori, Pacific and female ākonga into technology careers and connect those already in the tech industry to their future workforce. 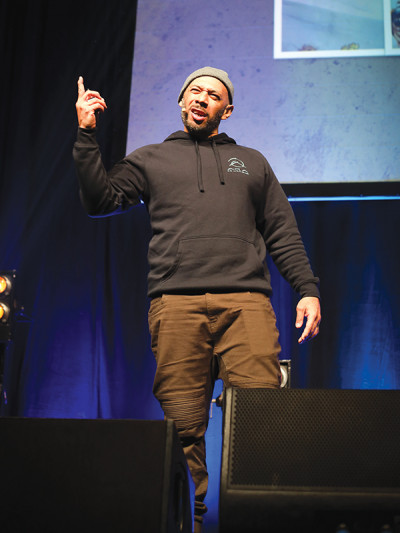 James Brooks grew up in a Kiwi community blighted by poverty and street violence, an upbringing short of opportunities. Today he is a hip hop artist turned software developer, a beacon of hope to young people and one of the faces of a rapidly growing technology workforce.

“My youth was all about trying to survive my environment – abuse, poverty, violence and neglect.
I went to school because it meant freedom, and my passion was hip hop. Music became my pathway to a better life, first in rap and then in technology.”

“ARA blends the indigenous with technology, and I wanted to be part of that, of growing our culture in the tech space.”

James and his story are testimony to the value of diversity and creativity in the world of technology, and he was a hit with young people at the Tech21 Summit in South Auckland in May, delighting them by opening his presentation with a rap.

“He was cool, it was inspiring,” says 14-year-old Aydan from Te Kura Māori o Ngā Tapuwae in South Auckland. “He’s so successful, he’s proof that you can do well.”

Tech21 is co-hosted by the Ministry of Education and NZTech, a not-for-profit organisation driving positive change in the technology industry.

The purpose is to empower young people to gain a better understanding of future tech pathways and opportunities, for the tech sector to gain insights into the lived experiences, capability and aspirations of youth and whānau, and to strengthen the relationships between ākonga, whānau, school leaders and the sector.

Following a mihi whakatau led by Roimata Minhinnick, from Ngāti Te Ata, ākonga from Papakura High School and Manurewa High school opened the Tech21 Summit with a key message: “To education leaders and the Ministry, we encourage you to be limitless in your vision for how we can be part of these conversations, every day.”

Aydan and his peers from Ngā Tapuwae were amongst 1,400 students who joined the summit to meet and mingle with Māori and Pacific technology professionals and to explore state-of-the-art technologies such as virtual reality, robots, drones, and special effects.

Manaia, aged 13, was similarly inspired by James. “I like his ‘bringing up’ story. I really like science and today I have learned about jobs combining science and technology. I liked the VR stuff a lot.”

“Māori and Pasifika tech success will be a critical driver of economic wellbeing for all New Zealanders in coming years,” says Graeme Muller, CEO of NZTech.

“The common theme across all of the companies and organisations is that there are a massive number of jobs, there is a shortage of skills, and there is a real issue with lack of diversity.”

NZTech’s research reveals that less than three percent of the tech workforce are Pacific people, four percent are Māori, and only 27 percent are female.

“It is critically important that our tech ecosystem is diverse and inclusive as we enable the Kiwis that are trying to embrace digital empowerment and transformation,” says Graeme.

“We know there is a tech job to suit everyone, and we want to show ākonga tech careers involve more than just coding!” 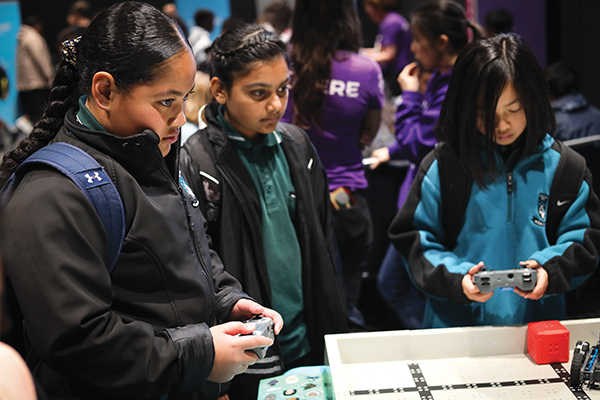 James (Te Ati Haunui-a-Pāpārangi) says the adversity of his childhood has given him insight and wisdom with which to reach rangatahi who have none or few inspirational role models.

“I tell them, ‘I know what it’s like, I’ve been in your shoes, and I can tell you there’s so much in life we can achieve by being brave and having the courage to try’.”

For Mahuta, aged 14, Tech21 was a chance to explore careers that combine his interests in te reo, maths, and science.

“I want to be an engineer although I’m not sure which type. It was cool to see how you can use robots to solve Rubik’s Cubes, and it was a buzz to be out of school.”

Southern Cross Campus student Raynesha, who is of Niuean descent, says it was great to see the speakers were “of different ethnicities”, and also to hear that some speakers “sounded nervous”.

“It made me realise that they’re just normal people like us. Maybe I could do that sort of job one day? I was very inspired by Anne Taunga from Weta Digital, by hearing how she got into the film industry.”

Anne Taunga manages the facial motion department at the Academy Award-winning visual effects company and is one of fewer than 10 Pasifika women on the 1,500-strong staff. She advocates for Pasifika and Māori young people, encouraging them to find their creative voices.

“I was a small-town girl from Taranaki,” she says. “Growing up, I never saw someone who looked like me on the screen or animations telling Pasifika and Māori stories. But someone took a chance on me.”

“We need more Pasifika and Māori representation in our films. And we need more women in senior management and creative positions. In saying that, it is improving and lots of cool organisations are encouraging positive change.”

Anne encourages young people to find positive mentors, teachers who encourage them to have a go at something.

“You don’t know what you can do until you have tried,” she says. “Make some space for yourself and do what you love. Find your voice, and don’t take anything for granted. You will fail, but don’t let that stop you, learn from it.

“Write down your ideas and create them,” she adds. “Tell your stories every day. You never know, that mad idea you thought up in your bedroom could turn into a blockbuster film.”

Faith, from Marcellin College, was also impressed by Anne: “It was really inspirational how she spoke to us and how she created movies with other people all over the world.” 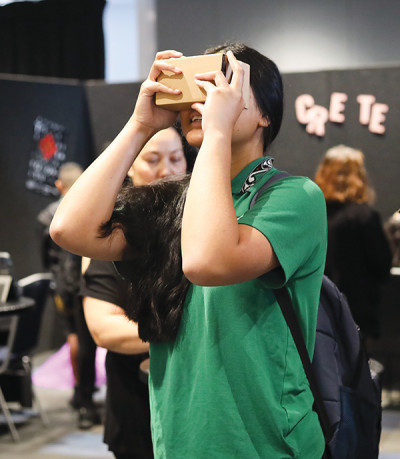 Students were able to try gadgetry and games, and mix with tech professionals.

“We work in an industry founded on storytelling and it’s important to have diversity in the cultures represented. We are not just a company filled with people sitting at computers, there is much more than that.

“Many of our recruits come through film school but there are a number of other routes, and opportunities to learn on the job and grow.”

Students from Te Kura Akonga o Manurewa closed the summit, with one saying, “We felt so proud being Māori and being able to stand in front of 2,000 people celebrating our culture and love for digital technologies.”

Youth and school leader think tanks, with a key focus on how they can empower youth, whānau, schools, industries, the Ministry and other agencies, are a growing part of the South Auckland education community.