Students and teachers in Canterbury will have the opportunity to learn computer game design and enter the inaugural Rubber Duck Awards this year. 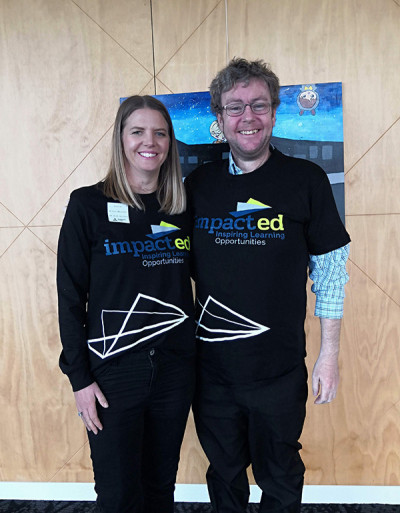 Arnika Macphail and the late Gerard MacManus, who was hugely influential in driving digital technologies learning.

Secondly, according to Lincoln High School’s Ruth Davey, teacher in charge of digital technologies, the rubber duck has a particular significance in computer programming.

“When your programme doesn’t work, if you sit down and work through it step by step explaining it to the rubber duck, you often find your mistakes yourself and then, magically, it works! The rubber duck is an inanimate sounding board – it gives you no ideas of its own; it simply listens. That often makes a huge difference when you are debugging a programme,” she explains.

The Rubber Duck Awards kicked off with a hui at Te Waka Unua School in 2020. This consisted of ākonga, kaiako and people from around Christchurch who helped develop the concept of the awards.

Funded by the Ministry of Education in Canterbury, the awards are a collaboration between PLD provider impactEd, game development company Gamefroot, and the Creative Trust, which aims to expand future pathways for Christchurch youth.

Arnika Macphail, kaiwhakahaere for impactED, says the idea for the awards came from Gerard’s mahi over the years, including projects they had worked on together when he returned to Christchurch, his home town, after getting a terminal cancer diagnosis.

She and Dan Milward from Gamefroot decided to develop the awards to engage kaiako and ākonga in digital technologies and honour Gerard’s hopes and work.

“Gerard’s whānau joined the first session at Te Waka Unua School to ensure the Rubber Duck Awards gave mana to their amazing Uncle’s mahi. Kaiako and ākonga  from Te Waka have been a huge part in shaping the awards, and have hosted many of the kanohi ki te kanohi (face-to-face) hui,” says Arnika. 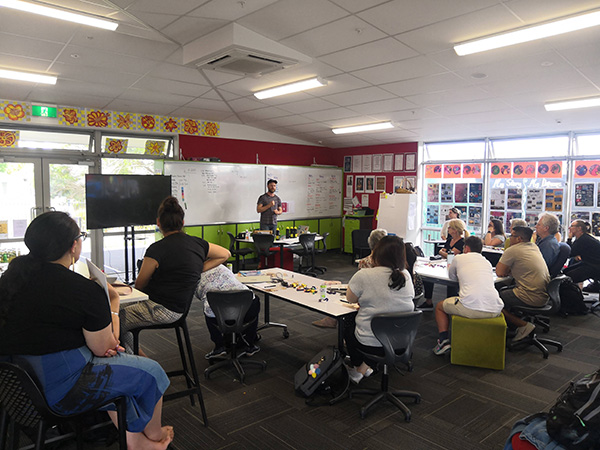 Dan Milward and kaiako from around Ōtautahi at first hui in 2020 at Te Waka Unua School.

The project began in late 2020 with several face-to-face and online professional learning development (PLD) hui for Canterbury teachers and kaiako to introduce them to the Gamefroot platform and the world of creating computer games. More hui will come in 2021 – both online and face-to-face throughout the Canterbury region.

In April, 11 teachers from Lincoln Primary School attended a day-long hui with Gamefroot and impactED. Within School Teacher for Digital Technology, Julie Paterson, says while it was new to most of them, they were very interested in learning how to code and apply it to the local curriculum.

“I got the teachers to download and log into the Gamefroot website and make an account before they arrived. Most of them had done that and had a little play. There are so many tutorials you can do before throwing yourself into it with the kids.

Julie is part of the Technology Team at Lincoln Primary, where they teach eTextiles, STEAM, design and innovation, and foods to Year 7 and 8 students from 12 schools in the area.

She has trialled coding with some of her students in eTextiles and plans to expand this in Term 2.

“I teach eTextiles, and we are getting the students to use coding software and are learning to unpack game design; we’re trying to encourage them to blend them together. I’ve got a group of students who want to design their own felt characters – they’ve done all the drawings. Then they want to put it into the game and do the coding to have all their characters jump around.”

“We talked to them about the Rubber Duck Awards so they can enter the competition, but I felt I had to unpack the local curriculum first because that’s one of the key concepts in the competition. We’ve been doing some local stories, making puppets with felt, filming them, making movies, and designing and developing digital outcomes – that’s part of the technology curriculum,” she says.

““We want ākonga to see themselves as creators and for kaiako to be involved in activities that open up pathways to ākonga. Something like game design, or game development, and all of the skills you learn where you are creating digital content for that context, can achieve this,” says Arnika.

Students and schools can design and submit their games between 3 May and 22 October 2021. Teachers and students can find more information about hui, as well as competition criteria, at rubberduckawards.co.nz (external link) 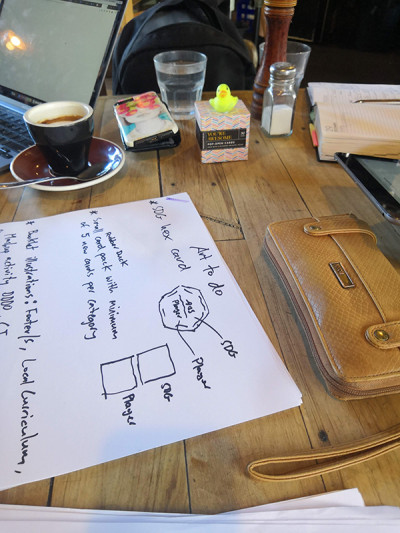 Every year, Ruth Davey runs a game design programme for Year 11 classes at Lincoln High School. While most students studying programming and computer science are keen gamers and fascinated by the idea of game design, they soon learn that a lot of preparation, time and hard work is required.

“In Term 2, they will go about making their game, and they’re very excited about that. They have been through Gamefroot’s tutorials, and through that, they learned the coding practices they’re going to need when they create their game.”

Ruth says that students learn how to deliver a quality, fit-for-purpose outcome within the time budget.

“Usually, you start by doing an ideas hunt, which involves research into the theme, potential characters, looking at existing outcomes that are similar or the same, and talking to the client and the stakeholders who will help you to develop it. You then brainstorm random ideas you have gleaned, find connections and then generate your ideas.

“You seek feedback on those ideas, usually from stakeholders, and finally create a prototype which you can test on your end-users and stakeholders. More improvements may follow, and then once the outcome is finished, you reflect on the process,” she says.

“I have found it works way better if you give the students some kind of theme and let them create something with a problem in that theme which they then solve.

“A lot of them take learning from other subjects and bring it to what they’re making, which in essence is what you want them to do. For example, a student who wanted to look at pandemics went back and looked at things like the Black Death and the plagues of London. They learn things because they’re making a game,” she says.

More than an illusion 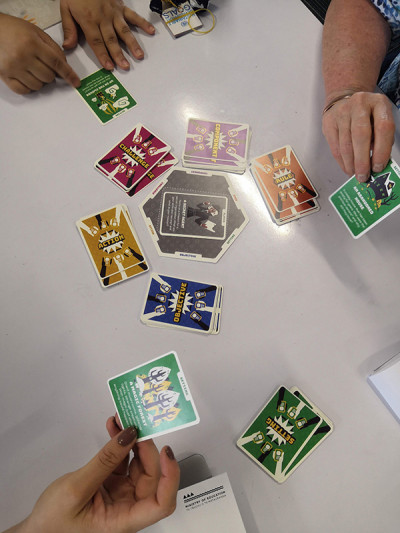 The card game Quick Start Rules teaches some of the principles of game design.

One of Ruth’s former students has completed the University of Canterbury’s game design degree and provides current students with feedback and a reality check.

“Once they’ve got their ideas together, he comes in and listens to them and gives them some feedback. It’s very valuable because it makes them articulate their idea. He makes money writing games, so he can give them feedback like: ‘this idea is really attractive because it’s unique, that one has been done so many times’.”

Programming classes are far more interested in how a game works than how pretty it is, says Ruth.

“I tell my students that they are the magicians creating an illusion on the stage – what the end-user sees is often little to do with what is going on.”

As students explore game creation, Ruth says the learning outcomes are evident in the students’ experiences and sense of pride.

“Once they have created the game, they have learned an awful lot. You can hear it in how they now talk about what they have made and in the happy, busy noise in the room as they do their work. You can see it in the pride they take in a job well done and the way they hold their heads up, look you in the eye and talk intelligently about their creation.”

The Year 11 students will have the opportunity to enter the Rubber Duck Awards. Ruth, who has attended some of the hui, says they provide a firm grounding in what Gamefroot is about, some insight into game development, and encouragement about different ways to make a game.

“Basically, there is a lot more going on in a competition like this than you might think about at first. It gives students a safe, awesome space to learn many skills that will set them up for success in life. To be successful, you don’t have to get everything right. Successful students and people know how to handle their failures in ways that do not damage their psyche or character, but rather build it,” she says. 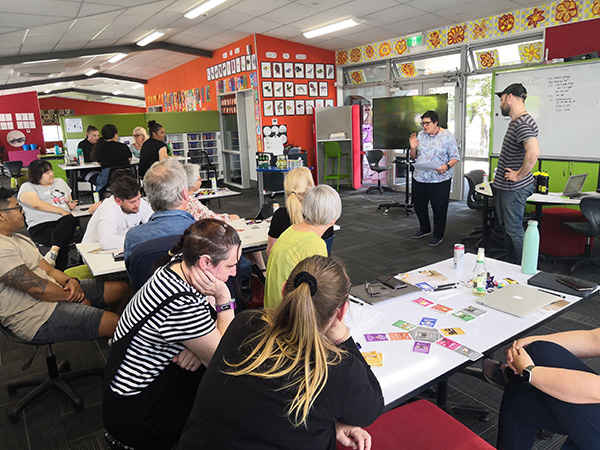