A flexible approach to different learning needs at Te Aroha College’s transition centre may include starting the day with yoga and mindfulness, followed by reading, writing and maths. 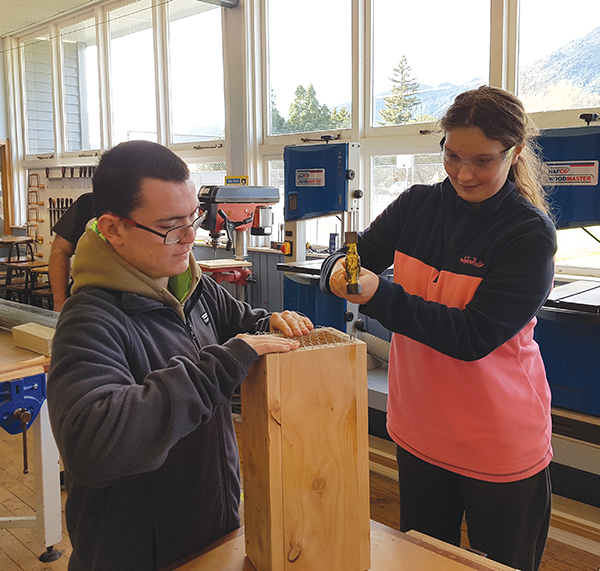 There is a strong focus on life skills at Te Aroha College’s transition centre where students spend time baking in the kitchen, helping in the vegetable garden or with the chooks or guinea pigs in the class’s cosy home on the school grounds. Students may move between the transition class and mainstream classes during the school day, says deputy principal, Samantha Mortimer.

“We’re quite flexible – some of them might only come for part of the day, and then we slowly try to build it up. One boy comes until about lunchtime – we were hoping he would come more full-time from this term, but lockdown has put us back.”

Samantha says that most students in the class do not fit into the alternative education model but may present with a mixed bag of learning disabilities, neuro-diversity, specific social and emotional needs and mental health issues.

“We have a number of students with issues including autism, anxiety, gender identity, shyness, dyspraxia, low learning levels, intellectual disabilities, deafness, and being out of school for a long time. The thing most of them have in common is anxiety, but many are on the autism spectrum as well.”

Students work on social and emotional development as many find it difficult to express, understand and manage their emotions.

“So they start their day with ‘How are you feeling?’ and some mindfulness activities. They do a health check list for themselves. For one deaf student it’s ‘Have you got your hearing aids? Are the batteries working?’ For some of our kids it’s ‘Have you brushed your teeth?’” 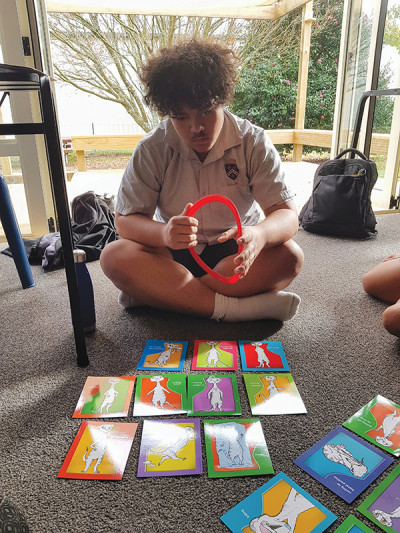 Te Aroha College, located in the small rural town of Te Aroha, northeast of Hamilton, had noticed that a number of students weren’t suited to a mainstream school environment. In 2016, with strong support from the Board of Trustees and principal, Heather Gorrie, the school began working with an offsite alternative education provider.

In 2018, the transition class was moved onto the school campus with a tight team including Samantha, teacher aide Katja Wotherspoon and the school guidance counsellor Joseph Hartzenburg.

Samantha remarks: “Having the right staff is key and we are so lucky to have Katja – she is the driving force!”

They also work closely with the school nurse, learning support coordinators, RTLBs, Northern Health School and Oranga Tamariki to try to meet the individual needs of the students and their families.

“When we talked to the students and their families, they often felt that mainstream school was not really the right place for them initially. Some of them wanted to work in smaller groups, which we already did with teacher aides, but we felt these students needed more life skills, as well as more work around developing and meeting their social and emotional needs.

“One of the great things about having the centre fully integrated within school is that the students can go to the different classes they feel confident in. One of our Year 13s joined us recently – she has got
Level 2 NCEA, but Level 3 was a bit too much. She’s doing a few mainstream classes, but the rest of the time she is in the transition centre because her levels of anxiety were so high that she was just making herself miserable,” explains Samantha.

While students in the transition class may not have academic issues, many have missed a lot of school.

“A number of our kids read lower than where they should. They probably do have some learning needs as well but they have also missed those big chunks of learning and are catching up. Not all of our students go back into mainstream, but some of them go back full-time and nearly all of them are somewhat involved in mainstream classes as well. We want all of our students to find success. That’s our goal really,” says Samantha.

The transition class hasn’t been a good fit for some students. “That’s okay; there’s a bit of stigma and they don’t want to be there. They didn’t see themselves as needing that support, which is a shame, because if they gave the place a chance, they probably would have thrived. But some of our kids really need a place where they feel like they belong.” 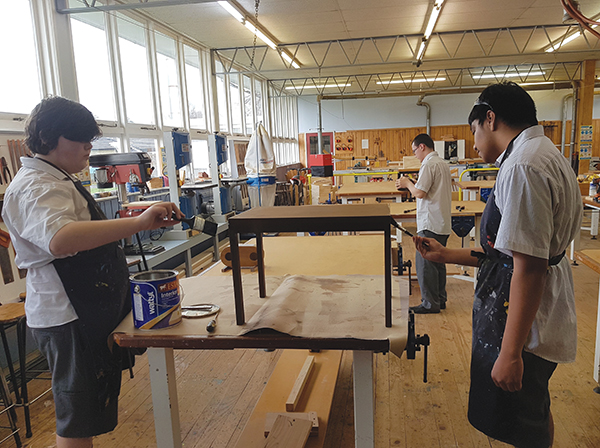 Different goals for each student

Goals for students at the transition centre may vary from turning up to class to being able to use the toilet at school.

“Our staff are really well trained in diffusing situations – they know the kids so well. One boy has massive issues with touching anything – he wouldn’t use the toilet, but now he does. He still wears gloves, but we are slowly working with him. I think it’s about trust and knowing that if there’s a problem we are firm but fair and will talk it out.”

Another boy on the autism spectrum is a top academic student but found mainstream school too overwhelming and is now in the transition class.

“He might not be able to work at the exact level but he can still use Google Classroom and do all the work the other kids are doing. I’m really hopeful that he will be able to go back into mainstream – just not at the moment.”

In 2019 a student who had not been in education for just over a year decided, along with her family, that the transition centre would be the best place for her to restart her schooling.

“On the day she enrolled we took her over to the transition centre – it was like she had been there for years. Over time she slowly moved into mainstream classes starting with English, then adding maths, then the rest of her core subjects. Finally, after lockdown, she decided that she was ready to transition into mainstream full-time, even doing PE, which she had previously refused to participate in.

“One of our students, a boy with some learning disabilities, is never going to go into mainstream classes full-time, but he absolutely loves robotics and so he goes into a robotics class with Year 10s.”

A former student from the transition class has now left school and volunteers at the SPCA –that’s success to Samantha.

“We have to understand that success will look different for each person. One of our students at the moment could go to university. But for me, it’s about everyone having the opportunity to contribute – that everyone feels like they have a role and are an active member of society,” she says.

Dharma (15) has been in the transition class for about a year and a half. She was curious about the centre and says it seemed like a nice place.

“I didn’t have any goals when I started, but I was able to concentrate. It has given me hope – I have been able to do my work without getting harassed.

“I have been able to make friends. I feel I have progressed – I am more talkative and more sociable. It’s a lot easier to think. It’s better than mainstream, trust me,” she says.

For Connor (18) the transition class feels like home. “It feels like we have our own house and our own room. It’s been helpful for my learning and my schooling. It’s a good place. There’s less noise, fewer arguments and fewer students so I am able to focus better.”

Connor likes making drinks for people when they arrive, or if he thinks they are feeling cold. He says that arriving on time, regular attendance and completing tasks like Mathletics have all been helpful improvements from being in the class.

Robert (15) had been in the class for a month and was already proud of completing two Te Kura workbooks. “It’s less distracting, less judgemental and we do more speaking. It feels homely, less people, less noise and more practical things to do.

“I have set a goal to achieve NZ Cert for Supported Learners Level 1, to improve my reading and spelling and get better attendance,” he says.

Diverse learning – Also refer to article "Looking after each other at Hora Hora School(external link)".