New entrant and Year 1 tamariki at Ridgway School in Wellington returned to school after Covid-19 Level 4 to a rich arts programme that saw them build a den of string, drape their teacher in a ‘Cloth of Dreams’ and model clay pieces that described their feelings during Level 4. 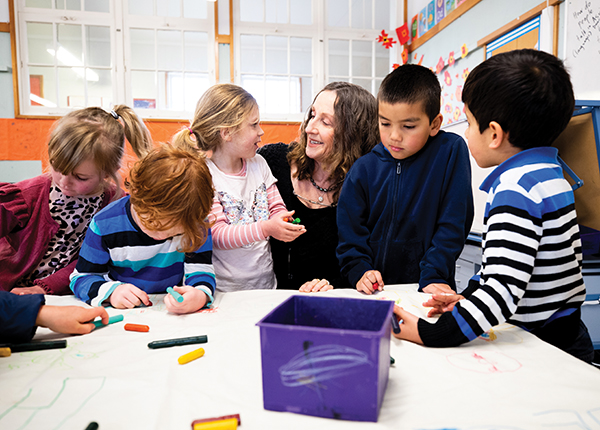 Julie Hanify exploring art and creativity with some of her tamariki.

The programme developed by teachers Julie Hanify and Amy Jack included many activities from Te Rito Toi (teritotoi.org(external link)), an arts-based resource for primary school teachers developed by the University of Auckland’s Faculty of Education and Social Work to support schools re-engaging students with learning following a major traumatic or life changing event.

The resource is based on research and practical work from researchers who have worked in places struck by natural disasters such as Christchurch, Japan and Samoa, and provides detailed lesson plans and classroom activities designed specifically for changed environments.

In June (Issue 9(external link)), Professor Peter O’Connor from the University of Auckland told Education Gazette that the arts bring joy and playfulness into classrooms and provide a safe way for teachers and students to navigate the emotions, fears and questions children have about a changed world.

“Research shows that creating fictional worlds has always helped people understand the real world, and the arts in these situations provides exactly that opportunity. We recommend teachers use an arts and wellbeing approach to engage children in this changed classroom environment,” said Peter. 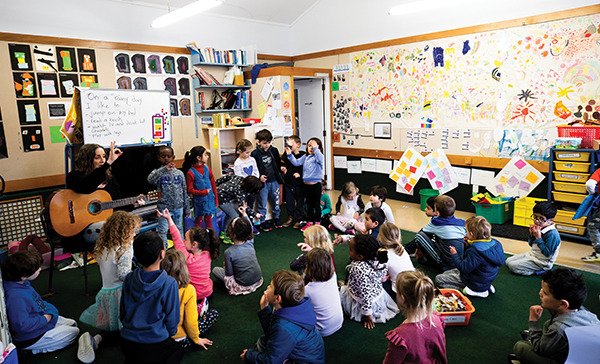 The Cloth of Dreams gave the children the opportunity to explore hope and dreams after the Covid-19 lockdown.

“Our principal had shared the website of Te Rito Toi which has a unit plan developed after the Christchurch earthquakes to resettle children and help them to reconnect with teachers and school,” says Julie.

“We started with the Cloth of Dreams. It’s a story about a little girl who wakes up and her cloth of dreams is torn: so what can we do to help her until she gets a new one? The children decided we would make a temporary cloth of dreams illustrating all of our hope and dreams. They had things like bubbles and balloons and teddy bears and family and all of the things that they loved.

“Cloth of Dreams was re-developing hope because around the country there was a lot of fear and negative talking; children hear it and pick up on their parents’ worries.”

Amy had taught in London and the idea for children to make an art installation out of string came from the Tate Gallery.

“The string den was made by the children. We just put some wiring up which they could toss ribbons and wool and string over; they decorated underneath tables with ribbons, pompoms, string and all sorts of little dangling things. They covered the tables with tie-dyed sheets to create tunnels they crawled through to get into the den. We did that so children could feel reconnection to school and other children. There was also an interaction of throwing string to each other over things. They expressed joy and happiness; it was like watching them dancing.” 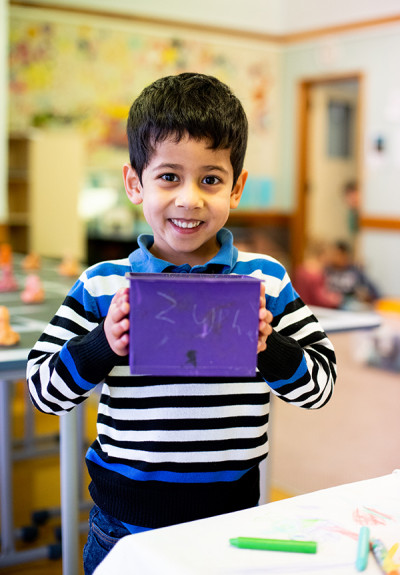 Art-based activities have helped tamariki like Zeyad, aged five, to settle back at school.

As well as getting used to new routines at school (social distancing, sanitising, washing hands), tamariki talked about worries and emotions resulting from Covid Level 4.

“They were really missing people. They missed their friends, they missed their grandparents, they were at home all the time. Although they went for lots of walks and had lovely times, their parents had to work, which was quite difficult for them. I’m sure there were tensions. If you have a couple of (say) professionals working at home in different rooms and a child or children to juggle, it’s really stressful for the parents.

“It was quite lonely for some of the children, so they could talk about being lonely, hope and the excitement of actually seeing someone from school out walking. It was really difficult to stop them just hugging each other when they came back to school.”

At the end of June, the school invited whānau to experience the Kōtare Arts Trail which consisted of the string den, the cloth of dreams, clay forms, shadow puppets for role playing using the expressive story Kei te Pehea Koe?

“There was an assembly with waiata and hip-hop dances. Then the children took adults through the two classrooms and corridor and explained their work. They were great - they’re just five years old! The parents were blown away.

“A couple of parents had children who had just started and they said NEVER had they participated in anything in front of adults – they were too shy and would sit on their parents’ knees instead of being involved in something. They couldn’t believe that their child would sing and dance in front of people, talk about their work and show them around,” says Julie.

Julie thinks that after immersing themselves in arts activities and at least 45 minutes of sport each day, children were much more settled than they might have been.

“As a school, we decided to focus on wellbeing and hauora, reconnecting and returning to school so we were only doing reading, writing, maths a few times a week. Normally you would be doing those things all the time, but our school decided not to focus on assessment until Term 3,” she says.

Te Rito Toi and the associated arts activities promoted recovery and resilience when children returned to school. Julie says some of the initiatives also helped children starting school for the first time.

“The children developed their resilience because they were gaining experience and doing it shoulder to shoulder with other children. They also asked questions and there was acting as well. I had to be the little girl in the Cloth of Dreams – I would lie down and wake up and the children covered me with a new cloth, so there was plenty of imagination.

“We had seven children start school during lockdown, so we were teaching these little new children online. When we started school, those children knew us and we did all that lovely art-based learning. I think it was a beautiful way to engage with new entrants – they had a ball. And I think they have been way more settled because of that start.”

Te Rito Toi is expanding its website teritotoi.org to include an online gallery of images and videos of Te Rito Toi-based work in progress or completed.

Jason Wilcox, head of Guitar and Commercial Music at St Peter’s, Cambridge, is also a professional musician who shares his knowledge with his music students.

Jason Wilcox, head of Guitar and Commercial Music at St Peter’s, Cambridge, is also a professional musician who shares his knowledge with his music students. Read more