Education Gazette has been a source of information for educators for the past one hundred years – from vacancies and teaching advice to guidance about the correct way to salute the flag.

In August 1921, Wellington’s Evening Post newspaper announced that the Department of Education was to issue a monthly ‘Education Gazette’ to convey instructions and suggestions to teachers as well as to advertise school staff vacancies nationwide.

“The legislation of last year adopted the principle of the appointment and promotion of teachers on a Dominion basis. The publication of an Education Gazette, now authorised by Cabinet, is the corollary to that legislation,” said CJ Parr, Minister of Education.

“The news of every vacancy will reach all the teachers, some 4000 in number. The present practice is for boards to advertise vacancies in the local newspapers, but the advertisements do not reach teachers in other districts.”

The Gazette was also to be a vehicle for imparting information, advice, and instructions to inspectors and teachers.

“The lack of such a channel of communication has been a serious embarrassment to the Department in the past. I am satisfied that in many schools in this country the teaching of elementary subjects lacks accuracy, exactness, and thoroughness. Deficiencies in these respects must be corrected without delay,” said Mr Parr.

By May 1922, strong criticism was voiced that the Education Department was “wasting money on a publication which is not worth that much”. Its chief function was to advertise vacancies, but the Education Gazette frequently reached teachers so late that it was “a prehistoric curiosity”, F. Martyn Renner, secretary of the Secondary Schools’ Assistants’ Association, told his annual conference.

By November of that year, Mr Parr directed the Gazette to publish advice about the correct methods for saluting the flag, the Pahiatua Herald reported.

“There are, no doubt, some teachers who have the ceremony performed in a perfunctory and unsatisfactory way, and it appears very necessary... that these teachers should receive some definite guidance. I think such guidance can best be given through the columns of the ‘Education Gazette,’ which reaches every school in New Zealand,” he said. 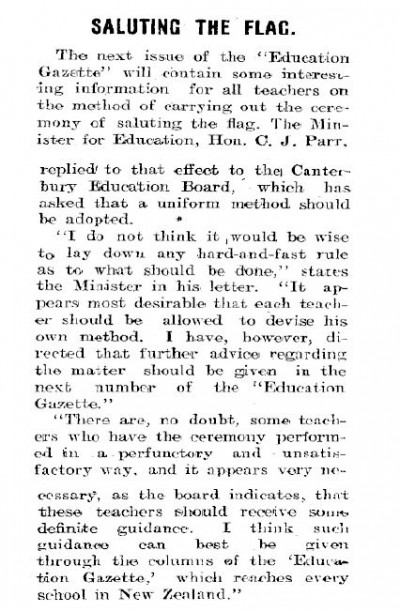 In the summer of 1937-38, the Gazette suggested a ‘warm weather curriculum’ for the first month of the new year.

Primary and secondary school teachers were recommended to regard the ordinary timetable as being suspended during February. Among the special activities recommended as adapted to seasonal conditions were swimming, first aid and resuscitation of the apparently drowned, home nursing, road safety practice, nature rambles, games and hobbies.

Schools experienced staffing difficulties during the World War II years, with the editor of the Gazette reporting: “Even up to the end of last year, nearly 100 secondary school teachers, or nearly 25 per cent of the total number of male teachers employed, were serving overseas or were on service with one or other of the armed forces in New Zealand itself.

“Several boys’ schools have already appointed women teachers to the staff in war vacancies, and mixed schools are employing a greater proportion of women,” he said.

The Evening Post reported in April 1944 that teachers were requested to instruct children regarding detonators. A notice had been placed in the Education Gazette instructing children about the dangers of playing with live detonators. They were also to be instructed about the danger of throwing lengths of wire across electric power lines. 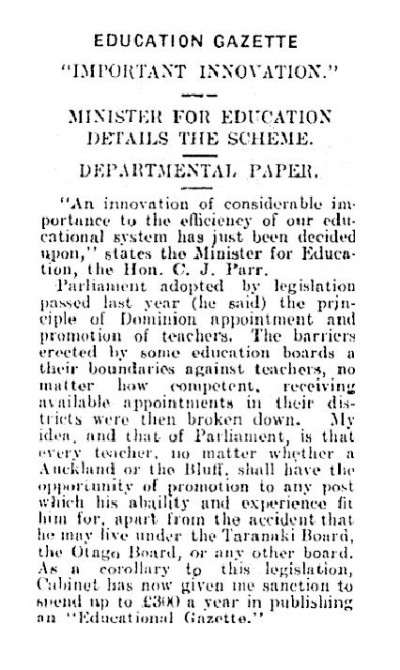 In March 1948 the Otago Daily Times reported: “The Education Gazette, which has been appearing regularly for nearly 30 years was being restricted to purely formal notifications. To replace the articles of topical interest to teachers which formerly appeared in the Gazette, a new publication, called Education is being issued.”

In May 1950, the Otago Daily Times published an article saying publication of Education was to be discontinued.

The Minister of Education, Ronald Algie, said: “At the present moment we cannot afford a luxury of this kind, but if individual teachers feel that the publication is indispensable, then it is always open to them to publish it themselves on a commercial basis, but under the present circumstances I cannot see how I could justify its publication at the expense of the taxpayer.”

Feature articles reappeared in the Education Gazette in 1999, when John Gerritsen was employed as editor. You can read John’s article about his 10 years at the helm of the Gazette in Issue 1, 2021.

This article was researched using the Papers Past website(external link).

Scenes of a school at Alert Level 3

Scenes of a school at Alert Level 3