On the face of it, Saint Kentigern Boys’ School and Saint Kentigern Girls’ School in Auckland have little in common with Tāneatua School in the Bay of Plenty, but a partnership formed after the nationwide Covid-19 lockdown revealed a shared set of values, leading to a deep connection between the schools. 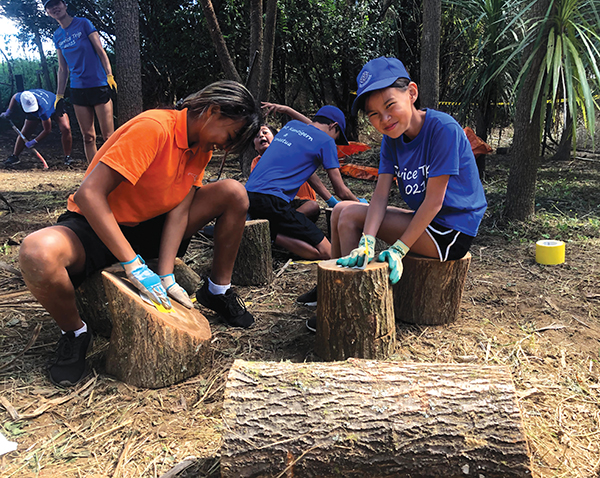 Children sand the seats together for the new fairy garden sharing circle.

When Covid-19 quashed a school service trip to Fiji and Vanuatu as part of the Saint Kentigern Primary Schools’ service programmes, the schools quickly realised there were plenty of opportunities to lend a helping hand to schools closer to home.

Presbyterian Support had previously helped connect Saint Kents (as the schools are popularly known) with a kura in Manurewa and following the success of that experience, put Saint Kentigern Boys’ and Girls’ Schools chaplain, Reverend Reuben Hardie, in touch with Mārama Stewart, principal of Tāneatua School, a rural school near Whakatāne.

Impressed by Mārama’s vision for her school, Reuben, Boys’ School principal Peter Cassie and Girls’ School principal Juliet Small were eager to help and learn, and they began to explore ways in which they might be able to work together.

Saint Kents, supported by Auckland City Council, has established a programme of repurposing playgrounds. So, after a few false starts due to Covid-19, and armed with this expertise, plus resources provided by some generous parents, it wasn’t too long before 44 students from Saint Kentigern Boys’ and Girls’ Schools and their parents were making their way to Tāneatua, where they were met with a warm welcome from the Tāneatua School community.

Then began a working bee like no other. The students formed working groups and worked together to shore up the school’s playground, lay rubber matting underneath, and create new garden areas and an outdoor classroom.

Testing out the newly laid rubber matting in the school playground.

Students from both schools were initially a little shy and tentative, but it didn’t take long for the children to form a connection.

“While the cultural differences were stark, the children quickly grew comfortable in each other’s company,” says Mārama.

“Before we knew it, they were playing rugby together and laughing and telling jokes!

“Seeing all of our kids working together, laughing and playing together, was soup for the soul and a great reminder that when our two worlds walk together as equals, everyone benefits,” she says.

“They just gravitated towards each other,” agrees Peter. “They were laughing, they were singing, and they were working hard together. And they formed very, very strong connections and friendships in that short space of time. Two communities working together for a common purpose.”

The experience was culturally enriching for Saint Kents’ students.

“We’re on a bit of a journey, in terms of our own understanding of tikanga and te reo Māori,” says Reuben.

In preparation for their visit to Tāneatua, the children learned their pepeha and experienced a pōwhiri and kapa haka performances.

The partnership has had a profound effect on the leaders at both schools as well.

“This job is so hard and when the school you lead is in a community affected by intergenerational trauma, it can often feel like every day is a constant battle with the outside world,” says Mārama.

“The first morning Saint Kents visited I had to be off-site advocating for a whānau who were about to be illegally evicted. I arrived at school late, worrying because I knew Peter was visiting and I wasn’t there to greet him.

“I was wandering around the playground looking for this fancy principal in a suit, and I found a lovely man covered in dirt pulling weeds under a tree. To meet such a kind, genuine person on a hard day like that affected me deeply.” 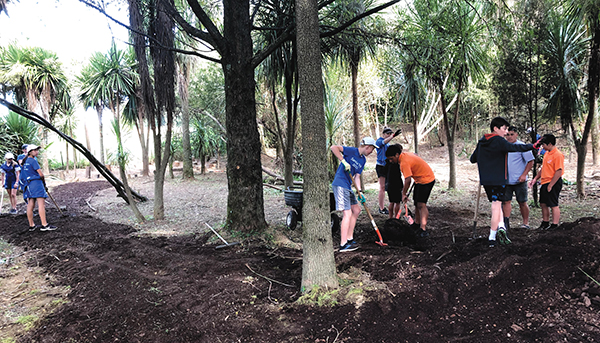 Mārama is eager to expand the horizons of her students beyond the rural setting of Tāneatua.

“Our kids sometimes struggle when they leave here and go to the high schools in town [Whakatāne]. We’re really working on that transition process.

“Part of that is getting our students interacting with people who don’t look like them as much as possible,” she says.

She grabs any opportunity to broaden their horizons. When Education Gazette visited Tāneatua recently, students were buzzing about the trip the night before to Tauranga to watch the Waikato Bay of Plenty Magic netball team play.

The partnership with Saint Kents was another chance for her students to interact with new people.

And similarly, the opportunity to meet others from different backgrounds and a different part of the country has had a lasting impact on students from Saint Kents.

“It’s pretty amazing when you hear how deeply some of these kids are affected by this opportunity,” says Reuben.

Tāneatua School recently featured on Seven Sharp for its jiu-jitsu programme, which is making a real difference for their ākonga and whānau.

“The next day, all of the boys here [Saint Kents] were just talking about it, saying ‘I saw my friend!’ and they were just so proud that they knew these kids, and that they were on TV,” says Peter.

The two schools are eager to continue the partnership.

“It’s about an ongoing relationship,” says Peter. “It’s not a case of ‘we’ve done our bit, let’s move on to the next project’. It’s really working with the communities so we can, you know, trust each other, work together and understand each other and realise that, hey, we’re all there for the same reasons.”

Saint Kentigern Boys’ and Girls’ Schools are keen to hear from other schools who would be interested in forming partnerships with them.

Te Rehita from Tāneatua and Leon from Saint Kents sharing a laugh during the Brazilian jiu-jitsu session.

“In week 6 I got the opportunity to go to Tāneatua School. I was amazed by how beautiful their pōwhiri was; the power in their voices showed how passionate they were about their culture, and how awesome it was when I clicked with some of the students. Especially Kaya and Para, who were students at Tāneatua. They both are Kapa Haka leaders and strong sports players, that were such incredible people to meet and have made a huge impact on my life. I really enjoyed being included with them in their sports. I had a fantastic time playing rugby and basketball with them.

“One of my highlights was when a few of the girls and boys from Taneatua and I sung some kapa haka songs – it was a great moment I got to share with them. After a long day of work at night, the students and teachers would walk to the beach and play a game then take a seat and reflect on the day we just had – it was a fantastic way to end the day.

“It was a challenge getting started in the mornings as I was extremely exhausted from the day before. By the last day my arms and legs were dead, but I knew that this was all for a good cause. It was hard but really great when the students from Tāneatua would work alongside us. We wouldn’t have got as much done as we did without them.

“Over the week what I have learnt from my experience on the service trip is that I need to stop taking things for granted and I need to be grateful for the things I have. I now understand how service is such an important thing and that service isn’t acting different in front of teachers or adults, but helping others all the time.”

“When I first heard Saint Kents were coming to our school, I thought they’d be rich, spoilt brats. After I met them, they were energetic and helpful. I loved slapping them up in basketball, rugby and touch. Most of them were so funny, some were dry, especially their ‘Momma’ jokes.

“Even though they’re privileged and have more than most people down here, they still love to share and help others. I know why their parents are really successful now, it’s because they want us to work hard just like them.

“I remember this one time, we were all tired – Saint Kents kids and Tāneatua kids – so we decided to sit on the pile of bark that we had been shovelling all day. The parents made us get up and soldier on. Luckily it only lasted two weeks, otherwise I would have quit and they would have heard my real Taney slang and experienced my real Taney attitude I save just for the locals.

“Overall, the experience was awesome and I loved meeting them. With this Saint Kents experience I can honestly say we all learnt that you first need to serve others before you can be a good leader for your community.”

Instructors from the Whakatāne Mixed Martial Arts Centre lead a Brazilian jiu-jitsu session with the tamariki.

A programme that nurtures children and helps them express their emotions and needs has been effective at a Rotorua school for the past five years.

A cross-curricular NCEA science and maths course at ASHS has resulted in deep learning about the physics involved in the principles of flight.

As the country hosts a series of major sporting events over the next few years, Sport New Zealand is leading a project with four national sporting organisations

A programme that nurtures children and helps them express their emotions and needs has been effective at a Rotorua school for the past five years. Read more

A cross-curricular NCEA science and maths course at ASHS has resulted in deep learning about the physics involved in the principles of flight. Read more

As the country hosts a series of major sporting events over the next few years, Sport New Zealand is leading a project with four national sporting organisations Read more