A Samoan language pathway in Auckland starting at early childhood has helped affirm the importance of language and culture from the very beginning of a child’s education. 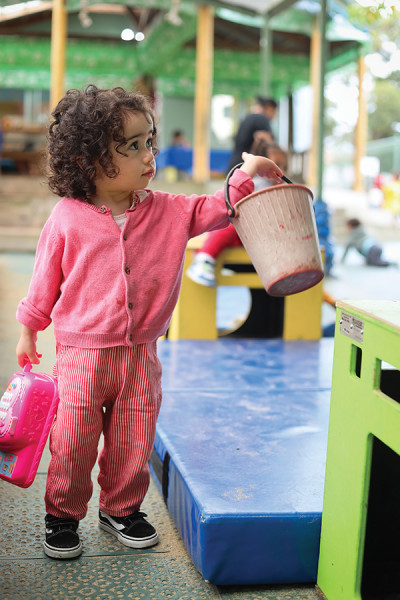 As a nation, we’re doing a much better job of valuing language and culture in a child’s learning than we were 40 years ago, says Jan Taouma.

It was the early 1980s and Jan Taouma and her husband had recently returned to New Zealand from Samoa. They were inspired by the burgeoning kōhanga reo movement that was rapidly growing momentum. What if they could set up a similar concept for children of Samoan heritage?

“There had been a big push when the first wave of immigrants came over to New Zealand to make sure they were good Kiwis and everyone spoke English. But they realised this could be of detriment to the language in the future,” says Jan.

From humble beginnings to rapid growth

Jan and her husband, who had been involved in early childhood education in Samoa, joined a group that aimed to set up a Samoan early learning centre in Auckland.

They formed an incorporated society and established A’oga Fa’a Samoa Incorporated in 1984.

The centre was initially run out of what was then the Pacific Island Resource Centre in Herne Bay.

“I used to drive a van around Grey Lynn and Ponsonby and pick the children up,” recalls Jan.

Then in around 1987 they relocated to Richmond Road Primary School in Ponsonby.

“The school had this innovative principal and he could see the importance of Pacific and Māori children learning in their own languages. He started up language units – a Māori one and then a Samoan one in 1986.” 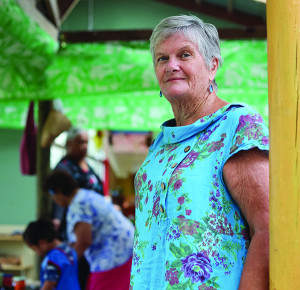 Jan’s children attended the school, and she approached the principal with the suggestion of moving their centre onto the school site so that children could transition into the language unit when they started school. The school agreed it was a good idea and A’oga Fa’aSamoa has operated from the school site ever since.

It has grown a lot in that time. Initially they ran from 9am to 12pm, but as women started working more, they extended their operating hours to meet demand.

“And all that time we ran transitional programmes to help children progress into the language unit at school.”

Based on what she’s witnessed at their centre, Jan is a strong advocate for providing clear and easy transitions between early learning and school. She says the Aoga Amata system, which began in the 1980s, with early childhood centres established as part of churches, was a really good initiative but lacked the continuation into primary school.

“I think having the centre on the school site is key to getting communities involved in education. For children, it makes the transition process so easy. Their brothers and sisters and cousins all go, and families get involved from the beginning, right through. Parents start on a management committee at the centre, then they go on to be on the board of trustees in the primary school.”

There is now a language pathway right through to intermediate with Kōwhai Intermediate starting its own Samoan language unit as well. Jan says the parents are the backbone of this pathway.

“We’ve got children coming to us now whose parents attended here. A lot of New Zealand-born children have missed out on learning the language and they realise how important it is and they want it for their children.” 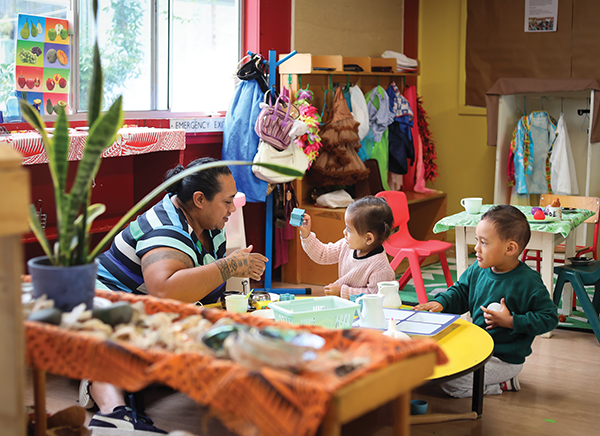 Play and learning in session at A’oga Fa’a Samoa.

It hasn’t been easy to get where they are though, she says.

“It’s been quite a hard, tough road to get to where we are now in terms of Government support and funding.

“Parents don’t realise that early childhood centres operate as a business and you’ve got to pay GST and IRD and have all of your employment things in place, and there’s a whole lot of regulation. That’s been very difficult for a lot of centres and many have floundered because of that. So support systems to help and guide centres are really important. It’s slowly happening now but it’s been quite a hard journey for a lot of centres.

“There was also a big push for all early childhood teachers to be trained and registered. But then when they went back to their centres to work, the centres couldn’t afford to employ them in the same way. So, centres lost a lot of teachers because they went to teach in mainstream so they were able to support their families. That’s been a big struggle to get that recognised and worked through.”

Heading in the right direction

In Jan’s view, it was worth all the hard work to get where they are today. As a nation we’re doing a much better job of valuing language and culture in a child’s learning than we were 40 years ago, she says.

Jan is pleased to see that the Ministry of Education’s Pacific Education Action Plan, released last year, reaffirms the importance of language and culture in a child’s learning. And she only has to look at the academic, sporting and musical successes of former students to know that they must be doing something right.

“The centre’s been around as long as me, so it’s pretty wonderful to see the successes that have come from it.”

Waverley Kindergarten is focusing on including bicultural perspectives in their practice to better teach tamariki and whānau the taonga of te reo Māori.

Waverley Kindergarten is focusing on including bicultural perspectives in their practice to better teach tamariki and whānau the taonga of te reo Māori. Read more