Last year’s Covid-19 lockdown gave many people the time and opportunity to try new things. For 16-year-old John Hopcroft it was a chance to build a global, online debating platform from scratch. Education Gazette talks to John about how he got started, how things are going and where to next. 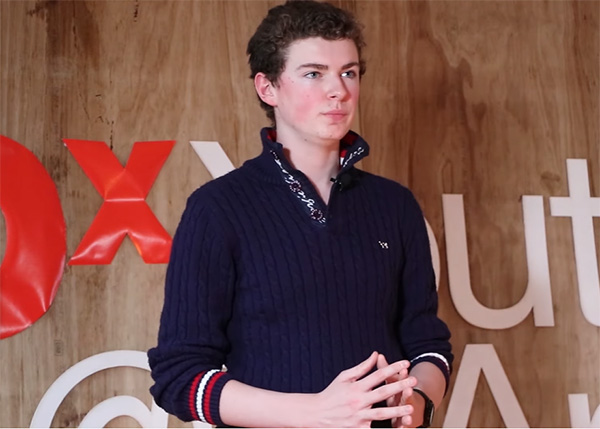 The Cosmos Championship is an online platform that brings together teenagers from all around the world to engage in debates through Zoom.

Students register on their own or with their friends, then they have the opportunity to debate every week through mini-tournaments called leagues.

Putting lockdown to good use

John, a student at Palmerston North Boys’ High School, combined creative thinking, down time due to the pandemic, and a passion for public speaking to develop the debating platform.

“I began developing The Cosmos Championship on the ninth day of lockdown after feeling unsatisfied with wasting the previous week binge-watching Brooklyn Nine-Nine,” explains John.

“I hated the idea of losing so much time and turning a great year into one of boredom and postponement. So, rather than letting 714 hours go to waste, I began investing all of my time and effort into a ridiculous and utterly unrealistic idea – a global, ultra-accessible and free debate competition.”

John’s motivation came from his love of debating and public speaking but also from a desire to connect people and allow them to share perspectives.

“My generation seems to observe a world which continues to become more polarised, more isolated and less understanding,” he says.

“I’ve always wanted a way to actively engage with and understand the world outside of my backyard. I feel one of the most important things is to be able to understand a different perspective, even if you don’t agree with it, as that is how we can overcome adversity together.

“Debating provides that opportunity by forcing you to come to grips with one side of an argument whether you support it or not. Doing this on an international scale gives students the opportunity to engage with minds from a completely different background and become more understanding of the world around us.

“I make sure there is always time for both teams to talk to one another while they debate, not as competitors, but as an opportunity to see what life is like on the other side of the world and as a way to make some new friends, which our participants love.”

Once he got started, John was determined to see it through to ensure the competition got up and running properly.

“After lockdown was over, I spent around 20 hours a week during school continuing The Cosmos Championship and 50 hours a week away from school to make sure that it at least had a chance to become something unique,” he says.

“The main challenge I’ve had is being able to dedicate the time this competition deserves.

“I miss sleeping for more than seven hours, and it’s unusual to prioritise emails over a scholarship exam happening in two hours,” John admits.

Part of getting the competition going involved convincing others that what he was working on was worthwhile and realistic.

“Many adults immediately saw a teenager creating something of this scale as a pipe dream and thought I must not understand what running such a competition means,” he says.

“Fortunately, there are organisations and companies out there that welcome the idea and recognise the potential high school students have in being able to create something impactful outside of the school curriculum.”

With people from 90 countries already registered, The Cosmos Championship is now one of the most wide-reaching international debate competitions.

“We are working to engage with as many people as possible so they can make the most out of the opportunities presented by The Cosmos Championship, whether that be as a participant, adjudicator, or supporter,” John explains.

“We are working closely with schools, organisations and companies from all around the world so their students, audience or debaters can make the most out of The Cosmos Championship.”

Creating the platform and working to make it succeed has given John valuable insights into the world beyond school.

“One of the most important lessons I have learnt is what it is like to live in a professional, work-focused environment,” he says.

“Before this competition I was quite confident making speeches, writing essays, and shifting demand curves side to side.

“Now I’ve had experience with many things teenagers don’t get the opportunity to delve into, such as project management, networking, partnership development, marketing, idea development, making the most out of every single dollar and a thousand other things. However, I still have so much more to learn.”

John hopes his story shows that young people are in a great position to try new things and take chances while they can.

“Everyone my age has a unique opportunity where the next eight years of our lives will determine the next 60 years,” he says.

“What we often fail to recognise is the unique opportunities a single school holiday (or pandemic) can provide.

“If things go sideways, we may walk away with a slightly bruised ego, but also with the experience of failure, a vast variety of new skills, and the knowledge that most people wouldn’t even try in the first place.

“It’s a period where you have very few commitments making it the perfect testing time for a new idea you may have. If you begin to see the potential, you will then realise how much spare time you have in a day when you are doing something you are actually passionate about.

“If we take significant risks to do something big, such as investing 1,000 hours into a new initiative, we have very little to lose and so much more to gain.”

Find out more about The Cosmos Championship(external link).

The Christchurch Children's Bookshop is Back