Language as a strength of identity

At Eastern Hutt School in Wellington, a language initiative is supporting bilingual students to uphold their language as a strength of identity in navigating life and education in Aotearoa. 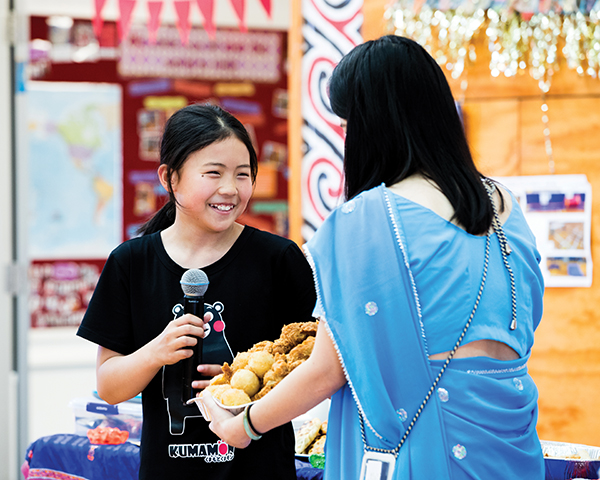 Emma, who speaks Mandarin, introducing the food she brought for afternoon tea during the final First Language Hui of the year.

Wanwan Liao would like to change the thinking around tamariki who possess more than one language.

Labels can put too much emphasis on ‘English’, she says, and sometimes this comes at the expense of other languages.

“So, when teachers and staff change their thinking around ‘are you an English learner or are you bilingual?’ – you can see the difference in how we view the students.”

The message that comes through is that language is a gift, not a handicap.

The First Language Hui are held every Wednesday at the Lower Hutt school. Tamariki who possess a language other than English meet and get to practice with others who share that language – and there are a lot of students who do.

Of Eastern Hutt’s roll of slightly more than 600, a quarter of the students have a language other than English. They can be bilingual or plurilingual.

The programme is popular and with just Wanwan and teacher aide Vandana Patel, there isn’t enough room for everybody, so, it is a bit selective. Usually, a degree of fluency is required and sometimes a ‘language rotation’ will take place.

This year there are five different language groups for the hui – Spanish, Mandarin, Gujarati, Hindi and Telugu, the latter three reflecting the high proportion of students with Indian heritage at the school.

Wanwan aims for a strength-based approach. Rather than another language being seen as a hindrance, she sees it as a taonga that has been passed on.

All teachers should know that that’s a skill the students have rather than something in the background, she says.

“That’s the reason I try to remove the label. A bilingual brain helps you to learn languages in a more efficient way. It also enhances their metacognitive skills (thinking about their thinking). As a result, they may be taking some time to process information, it doesn’t mean they don’t understand.” 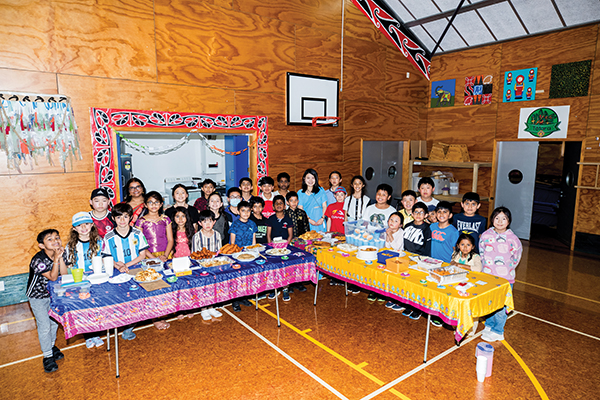 Students from five different language groups and several different cultures participated in the hui throughout the year.

Wanwan says the students need to be taught that their language ability is a strength. So, there is some training and scaffolding needed, especially as first languages are not usually used in
New Zealand schools.

This is done through hands-on activities and team building and problem-solving activities, encouraging students to use their oral language to complete tasks.

The students are grouped only by language. So that means children of different ages come together and learn from each other.

A simple example could be a game transporting cups with rubber bands and strings, in which they have to communicate with each other. 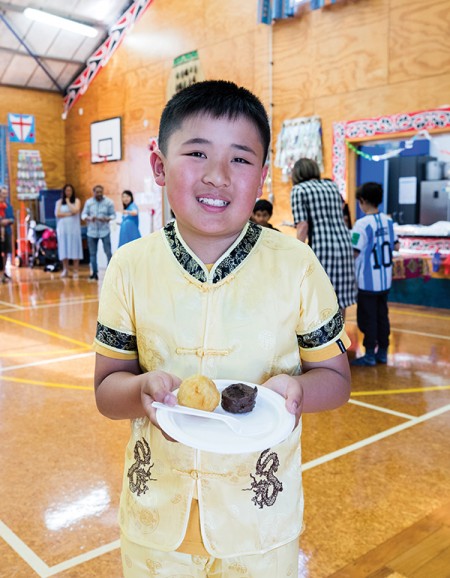 Jonathan, one of the hui’s cultural leaders, with traditional Chinese clothes.

“We encourage them to use their first language in this game. We discuss words we might use in the game before we play, for example ‘rubber band’ or ‘left’, ‘right’, ‘slow down’, ‘up’ etc. Most of the time they know the words and can use them straight away,” explains Wanwan.

The weekly meetings run for about an hour. After a briefing about the day’s activities with the Year 5 and 6 leaders of the groups, they break into their language groups.

Wanwan says she discusses the activities of the day with the older children first so they can relay that to the younger ones, and often the younger students are more fluent in their languages, so, the students have skills to offer each other.

Language in the home

Quite often parents are bilingual and, especially in the past, often encouraged English use at home as they tried to adjust their children to New Zealand life.

But given the heavy emphasis on English at school, the older children also find it easier to communicate in English with their parents. Even if they are asked something in Hindi, for example, they will respond in English, Wanwan says.

English is the language of everyday life, so it can be more natural to use English rather than their first language. But Wanwan says she wants them to know that it is hard, so they will put more effort into it.

Older children often use less of their native tongue as they operate more in English. But it’s like muscle memory, Wanwan says. You need to use it to get it back.

“One of the kids said to me in his feedback: ‘I thought I’d lost my Hindi, but I’ve found it’.”

Origins of the programme

It is the first year of the programme at Eastern Hutt School, but Wanwan has previously introduced the First Language Hui idea at Newtown School. And before that she was at Te Aro School, where the first language programme was started by ESOL teacher Cathie Cahill, who Wanwan cites as a “huge inspiration”.

The programme is in its eighth year at Te Aro School and Cathie says you can see the difference it has made to the students who take part.

She says the programme aims to encourage pride in a cultural and linguistic background, and provide the students with opportunities they might not have had. 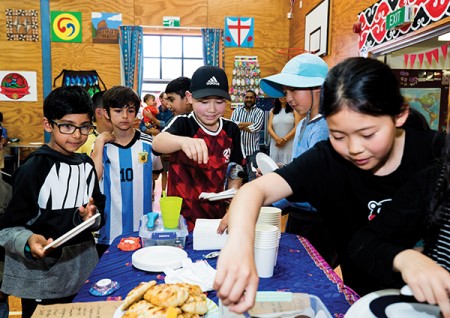 Zayn, Juan and Jin selecting food at the end of year celebration.

During that time, Cathie has noticed a growing pride and cultural connection within the linguistic groups. Students have become more confident about sharing their cultural knowledge and experiences, she says.

Some students have gone on to teach their classmates some words in their home language and they have created multilingual signs and displays to help make the diversity more visual around the school.

“This initiative has also been positive for engaging whānau and our wider community, and we are always open to new ideas for promoting the maintenance of our learners’ home languages and cultures.”

Cathie says they have been fortunate to be able to draw on the expertise of their Mandarin language assistants, and Arabic, Spanish, Vietnamese and Samoan teacher aides to support the programme.

An exciting new opportunity this term has been the chance to run ‘taster’ Hindi lessons thanks to the support of a tutor from the Hindi heritage languages group, she says.

Cathie and Wanwan report many of the same benefits. These include confidence, self-esteem and opportunities to connect and share knowledge of their culture. Naturally, it helps the students maintain or develop their language skills too. 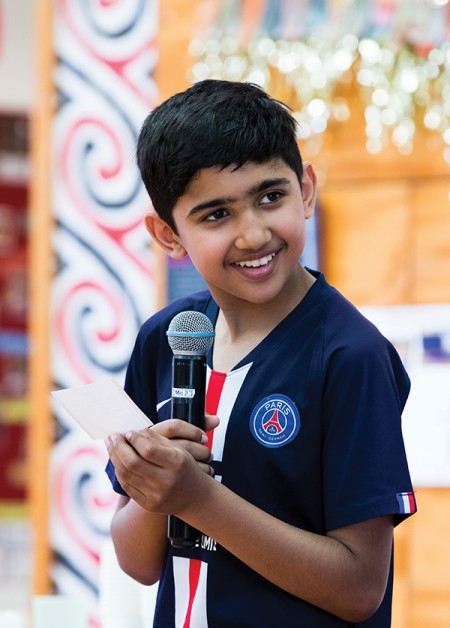 Kavish, one of the hui leaders, talks about special food he helped prepare with his whānau.

A student’s native tongue is part of their identity, Wanwan says. And being in touch with that language is a source of pride.

Knowing how to do something that most others can’t, can make them feel special, so it is a shame when an emphasis on English can be at the expense of that.

“It is sad to see sometimes students come to a New Zealand school being bilingual or plurilingual, but they leave with only English left,” says Wanwan.

“Learning English is important, learning the New Zealand way of living and learning is important, but to maintain who you are, where you come from, is also very important.”