Collecting back our knowledge

Education Gazette profiles celebrated Māori leader Mina Pomare-Peita, with a focus on her mahi with rangatahi and the environment. 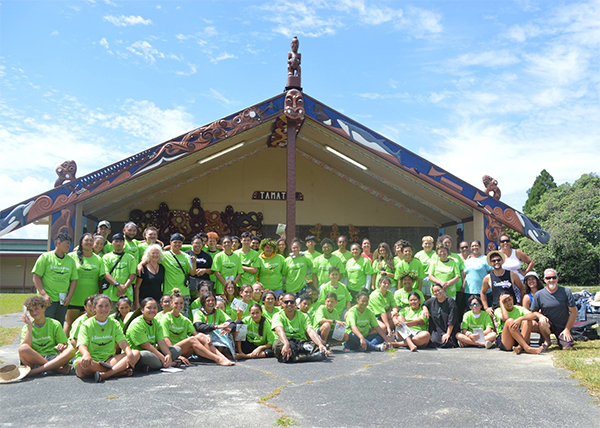 On a breathless summer’s day, up a remote river valley north of Mitimiti in the Far North, the buzzing of bees and the song of tūī are interrupted by the sounds of quad bikes and human voices.

A group of rangatahi, perhaps 30 young Māori boys and girls, come into view around the river bend, laughing and teasing, excited to discover the large swimming hole opening out before them. Adults are with them, all in shorts and singlets.

There’s a holiday feeling, and yet a serious element surrounds the group as they gather around to inspect one of the noxious weeds that grows rampant in the area. “It’s important that we know how to look after our land, especially our Māori land,” one of the rangatahi says.

This is music to the ears of Mina Pomare-Peita, the tireless principal of Te Kura Taumata o Panguru – a composite school that teaches Years 1-13, comprising around 100 students – and tumuaki of the award-winning Noho Taiao, a series of camps for the environment that she’s been running for more than a decade.

It was this initiative that brought this group of college-age students together for six days in their January holidays to stay on local marae and learn about the land of which they are kaitiaki.

Initially a once-a-year event for students not just from Panguru but from schools throughout the Te Rarawa rohe, the noho now comprise three events per year, with two shorter ones in the winter months including pupils from all five of the Te Hiku o te Ika (Northland) iwi.

Up to 50 tamariki attend the summer camps, and up to 60 come to the winter events where they learn species identification, water quality monitoring, planting, pest control and rongoā (Māori health) practices. 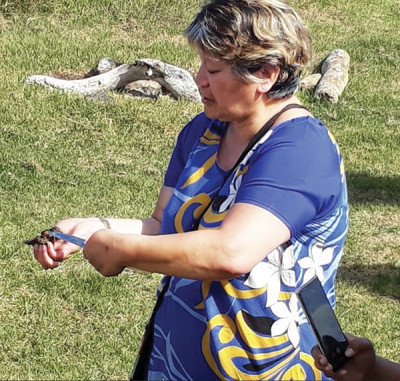 Mina Pomare-Peita demonstrating her passion for teaching and the environment.

In 2020, Mina herself was nominated by her fellow teachers at Panguru School, and was highly commended in the Kaitiakitanga category, the commendation stating: “Whaea Mina Pomare-Peita – For her longstanding dedication to education and developing our future leaders through the use of Mātauranga Māori.”

And she is delighted that Te Kura Taumata o Panguru has been named a finalist in this year’s Prime Minister’s Education Excellence Awards.

It all began back in 2008 when Mina had a conversation with her friend Paul White, a member of the Te Rarawa negotiating team who for many years had been working towards the iwi’s Treaty of Waitangi settlement. The settlement was nearing its final form. The return of some of the iwi historic land, including the transfer of two farms, was imminent.

“When we get our land back, what happens?” Mina asked.

“But our people don’t have the skills or the education, the mātauranga,” she said.

It was, for this lifelong educator, a moment of powerful realisation. Much traditional knowledge about how to care for the land had been lost. Māori learned to farm in the colonisers’ way, as if they were somehow separate from the taiao, from the environment around them. They no longer knew the stories that intimately connected them to the land, the forest and ocean. They did not have ingrained within themselves the whakataukī: Tiakina te taiao, tiakina te iwi e –
If you look after the environment, the environment will look after you.

Mina knew this at first hand. She grew up on a farm just a few kilometres west of Panguru, and from her earliest years, encouraged by her parents and nannies to think critically about the world around her, had observed and challenged the practices that are the hallmark of modern agriculture – the pouring of chemicals onto the land, the stocking of cattle that damage the texture of the land and the quality of the waterways, the milk tankers that arrive and take the milk away to unknown destinations.

As a teenager, Mina left Panguru for St Dominic’s Catholic College in Auckland, followed by university and then several years establishing the rumaki at what was to become Western Springs College – a total immersion unit within a mainstream context, still successful today.

She returned home to Panguru in 1996 and set about strengthening the school’s commitment to te reo Māori and building strong connections between kura and community.

Now she wondered how she could prepare her students, the young people of Te Rarawa,to live by, and for, the taiao.

“Kaitiakitanga means sustainability,” she says. “How do you sustain what you’re doing in the environment? Well, you teach your children to become kaitiaki. You make them believe that they are kaitiaki of their land.”

She realised it was about getting the young people actually out into the whenua so that they could grow a love for the taiao.

Mina has such a passion for the environment that in 2020, after a heavy storm ripped open a disused landfill at Fox Glacier, spreading rubbish across a huge area of river bed and coast, she took eight of her students on the two-day journey south to help with the clean-up. The students saw for themselves the degradation of the taiao, says Mina.

To begin with, it was all done on the smell of an oily rag. Funding was not available, and so Mina and her team did it all themselves.

“I live on a farm so I’ve got three freezers of food. We had my good friend Ray Henwood who was a physicist and a science teacher at Northland College, and I can deliver biology up to Level 3.”

Now, the University of Auckland contributes $5000 a year, and expert input has come through Mina’s developing relationships with significant Crown Research Institutes, so that scientists from GNS, Niwa, and other CRIs all come to teach the young students. For some students there’s no doubt this has translated into career-thinking.

But the Noho Taiao aren’t just about bringing specialised Western science to the rangatahi. They are a radical reclaiming of Māori knowledge – a powerful partnership of Mātauranga Māori, based on a sustainable relationship with the natural world, and Western science.

Mina says the food, the trees, all the life of Aotearoa, was categorised within the Western system of knowledge.

“Our job, what we live for today, is about recovering. We are reframing, we are collecting back our knowledge.”

She wants her students to learn to work within the land.

“Learn to touch it, feel it, smell it, sound it out. It’s all about applying science in the real world.”

Mina’s environmental work doesn’t begin and end with the Noho Taiao. Far from it. The taiao is fully integrated into the life of her school. 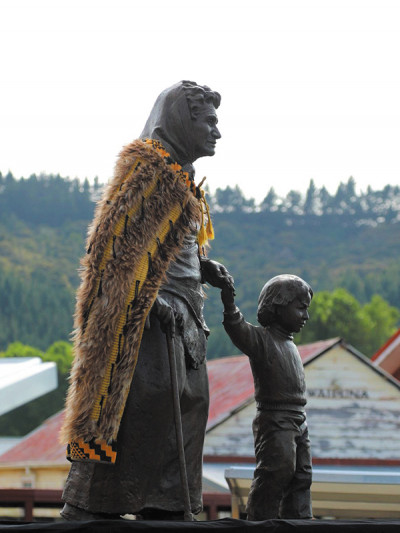 Te Kura Taumata o Panguru is backdropped by Te Warawara Ngāhere, described by Dame Whina Cooper as “a living spiritual being”. Her mahi is remembered with this statue at Panguru. Photo courtesy of Willow-Jean Prime.

At her request, the Catholic agency Caritas developed a curriculum guide to Te Warawara Ngāhere – the forest that grows over the steep hills of the North Hokianga, dramatically framing Panguru in majestic green, described by Dame Whina Cooper as “the living spiritual being of Te Rarawa”.

Te Warawara is home to many threatened native species including North Island kiwi and kaka, bats and karearea, the New Zealand falcon.

The curriculum includes activities, worksheets and lesson plans and is aimed at both inspiring and educating primary and secondary school students. In tandem with the curriculum, Mina’s school has held extended debates on the 1080 question, and has also developed a virtual reality programme, as well as a graphic novel and a play.

“We’re telling our story so that our children know,” Mina says.

And, of course, her students have fun. Back in that remote river valley, hot sun pouring down, the students of the Noho Taiao have finished learning about noxious weeds. It’s time for a break, and they do what any other teenagers would do, plunging joyfully into the cool, drifting river.

Rongohia te Hau is a tool that, when used as part of a wider strategic change process, can drive transformative change for learners and whānau.

Rongohia te Hau is a tool that, when used as part of a wider strategic change process, can drive transformative change for learners and whānau. Read more