Education Gazette explores how live theatre performances support young tamariki to grow and develop their social and emotional learning and reflect on their interpretations of stories and events. 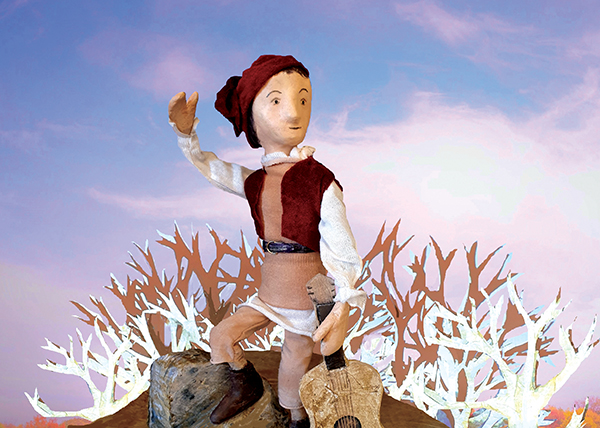 Jack, a puppet used in live theatre show, The Boy with Wings.

Live theatre shows are encouraging young audiences to step into a world where their imaginations are valued and nurtured, and to form deeper connections with the stories they are engaging with.

A well-known storybook helping children understand grief and how to say goodbye to the people and things they love the most is about to become a live theatre show.

Aya and the Butterfly, written by Dr Maysoon Salama, is dedicated to the families and children whose lives were changed forever after the attack on the Muslim community in Christchurch on 15 March 2019. Maysoon lost her son, Atta in the mosque attacks and the story was written for her granddaughter, Aya.

The story follows Aya as she grows and nurtures several swan plants in the garden with the help of her grandparents. Butterflies eventually come and lay eggs on the plants and caterpillars soon appear. The death of Aya’s father is implied but it is not the main focus of the story. Instead, Aya learns patience and understands letting go as the caterpillars turn into butterflies and flutter away. The story’s goal is to help any child dealing with loss and trauma.

Aya and the Butterfly is currently being developed into a live theatre show for tamariki aged three to five by theatre company Birdlife Productions.

Birdlife Productions create shows specifically for schools and kindergartens. Founders, Bridget and Roger Sanders, pair hand-made puppets and backgrounds with live music, aiming to bring a sense of wonder to their young audiences.

Bridget says she first discovered Aya and the Butterfly on the staffroom coffee table at a kindergarten.

“I was instantly drawn to the use of the theme of the natural cycle of the monarch butterfly to explore the importance of moving through grief – letting go and finding hope,” she says.

“I felt that the strength of the imagery would be a good premise for a piece of theatre for young children, as well as adding to the diversity of telling stories from New Zealand’s minority cultures and communities.”

Maysoon says she hopes the development of her story into a theatre show will create new connections, relationships and bring her story and its characters to life.

Turning her book into a show is not a literal retelling, rather it’s a conversation where one story-telling format has inspired the other.

“I am positive it will shape the human experience in the story in a purposeful and interconnected way, appealing to children,” says Maysoon.

“Retelling my story in a puppet show will bring more affirmation to the concepts and lessons intended from the story. It will stir emotions and feed an appetite for discovery and more learning and expansion of knowledge.” 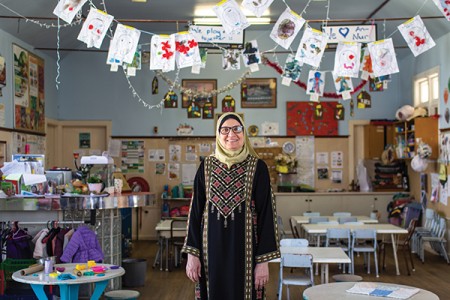 Dr Maysoon Salama, the author of Aya and the Butterfly, is the manager of two Muslim early learning centres, and the emeritus national coordinator of the Islamic Women’s Council New Zealand.

Maysoon explains, due to the young audience, the storyline will be minimal.

“Our most important intention is to represent the emotional journey of Aya, reflecting that through the metaphor of the butterfly cycle, showing the patient unfolding of grief and the importance of letting go and that it’s OK to cry,” she says.

Through going deeper into the character’s perspectives in the live show, Maysoon hopes the young audience will be able to make connections to their own experiences with the themes.

“Children need to learn to name and describe their feelings and to also recognise and acknowledge these feelings in others too,” she says.

Maysoon adds that discussions about death with children are often avoided. Yet, she believes it is essential children learn about how to remember and feel sad, alongside letting go and continuing on in their lives with hope.

After watching the performance, Maysoon says a young audience could be encouraged to analyse the puppet show and reflect on the differences to the original story.

“This is to encourage development of their social skills,” she says.

Maysoon also hopes the theatre production will allow for further celebration of the Islamic culture, language and values in a way that is missing from her storybook. The story has been given another dimension through live performance, as a new message will be about learning to accept and respect other cultures.

In the development of the production, Bridget says there have been ongoing conversations about the considerations needed in representing a culture different to their own.

Maysoon adds that the performance will delve deeper into the story’s message and the perspective of the characters. The project is set to be completed and ready to tour by September. 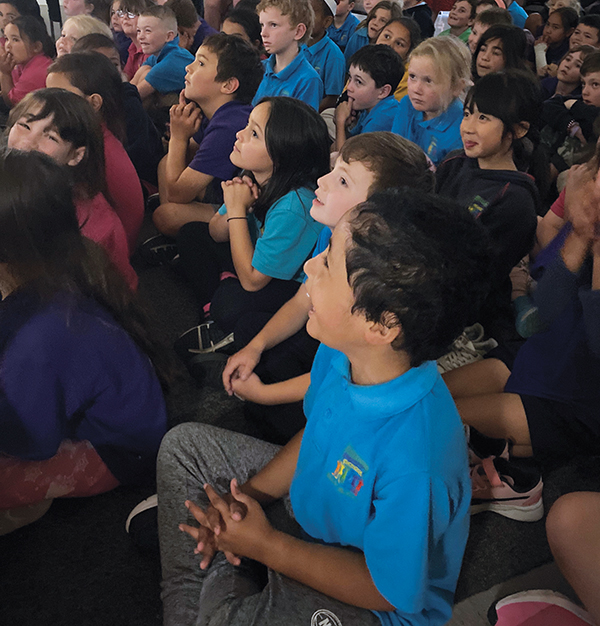 Live theatre can be used as a tool that fires up the imagination of tamariki.

Maysoon believes live theatre is a great alternative to screen-time, offering education and fun story-telling for children in a magical world of make believe.

“It has the power of suspense and disbelief, which is very appealing to the heart of children.”

Birdlife Productions specifically love stories that walk a meandering path between fantasy and reality – a perfect combination to capture a child’s imagination.

Bridget says when children are entertained for a brief time, pulled into someone else’s story through all of their senses, it gives value and perspective to their own lives.

Lyn Gardner, theatre reviewer at The Guardian says live theatre gives children skills and creativity necessary “to face the world, to understand it, and perhaps change it too.” She believes to solve world issues faced by young people such as climate change, economic collapse, and a global pandemic, imagination is needed just as much as smarts, skills and knowledge.

Live theatre can help with children’s learning and development, with a particular focus on social skills and understanding different emotions.

“Live theatre takes children deeper into the world of their imaginations – a vital link that has been proven to aid emotional intelligence, lengthen attention span, and equip them to better face the challenges of life,” says Bridget.

Maysoon also points out research on the effectiveness of puppet shows as a story-telling method has shown a link to improvement of children’s behavioural issues. She says live theatre could also have a positive impact on improving mental health among children.

Watching a movie on a screen can be a way to switch off the mind. In comparison, live theatre actively engages the child in the story, also providing time to absorb and reflect.

“Live theatre takes us on a journey that transcends the pages of the book because it is so five dimensional – it comes at us from so many different angles, through our emotional and physical engagement,” says Bridget.

When performing, Bridget says they incorporate plenty of nuanced changes to tempo and pace, including times of stillness, gentleness, and observation, allowing time for thoughtful reflection.

Live theatre simplifies extraordinarily complex stories in a way that allows all ages to be involved.

Part of the magic of live theatre is weaving together humour, live music and allowing the audience to join in as well.

This is a vital way to help young audiences form a deeper connection with a story’s characters and overall message. The audience gets to be a part of the story too.

Older children become intrigued by the development of the story itself – the making and construction aspects. Younger children simply enjoy the fun and adventure. 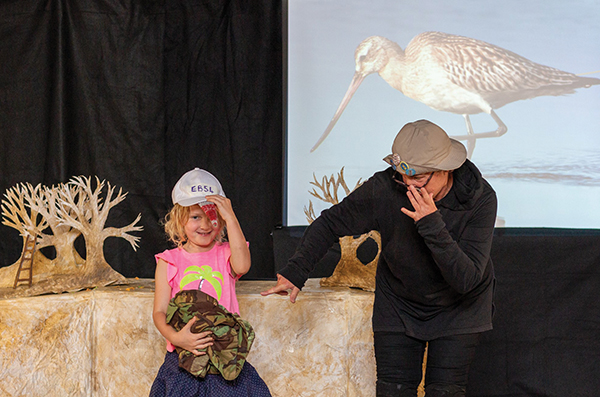 Students and teachers from Ngatimoti School in Tasman experienced live theatre’s magic in December 2020 with a performance of The Boy with Wings, which tells the tale about the annual kuaka/godwit migration.

Kuaka/godwits migrate to a beach near the school each year so the story was particularly relevant to them. But principal Ali Turner says the story’s themes of habitat destruction, journeying and reflecting are important and relatable wherever you live. A teacher’s pack is provided with the show, allowing teachers to explore those deeper themes of the play back in the classroom.

Ninety-five tamariki aged from five to 13 years, teachers and even a 75-year-old grandparent watched and enjoyed the show.

Ali says there was an overwhelmingly positive response, something they found surprising due to the diverse tastes and needs of the differing age groups.

“All students were enthralled by the magic of the puppets, the clever set designs and changes, the lessons within the story and the ability for many to link their own experiences and knowledge to this show,” she says.

The Ngatimoti teachers themselves were awe-struck and enthralled. Ali says the play is a “fabulous example of story-telling,” where Birdlife Productions were able to convey information, capture and hold the attention of students, staying hidden yet visible.

“The ability to laugh, connect, listen intently, and be absorbed in a live show cannot be underestimated,” she says.

“Live theatre gives a personal experience, a sense of authenticity and an aura of mystique when performed well.”

You can read a previous article about Aya and the Butterfly(external link).

Conversations with Teen Mums is a web-based film project that captures the lives of girls who have become mothers while still young themselves.

A programme supporting diverse learning needs has been part of a north Wellington intermediate school’s approach to learning support since 2015.

Conversations with Teen Mums is a web-based film project that captures the lives of girls who have become mothers while still young themselves. Read more

A programme supporting diverse learning needs has been part of a north Wellington intermediate school’s approach to learning support since 2015. Read more