A series of illustrated storybooks developed to support and celebrate New Zealand’s Muslim community shows the diversity and richness of different cultures while highlighting the very human need for love and belonging. 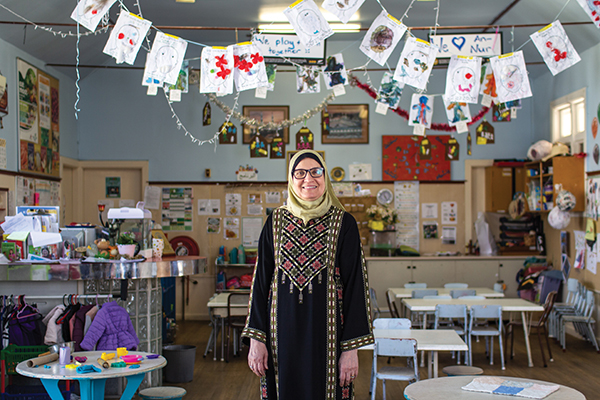 Ā Mātou Kōrero | Our Stories is a collaboration between the Islamic Women’s Council (IWCNZ) and the Ministry of Education designed to promote unity, diversity, and inclusion.

Aya and the Butterfly, Welcome Home, Open Day at the Mosque, and Ko Wai Au? – Who Am I? are now available in print and online. The books are intended for both Muslim and non-Muslim tamariki throughout Aotearoa.

The series originated in Dr Maysoon Salama’s book Aya and the Butterfly and is part of the Ministry’s response to the 2019 mosque attacks in Christchurch, which resulted in 51 lives lost.

One of those who lost his life, was Maysoon’s son, Ata Elayyan.

“I lost my son, and I was always thinking about my granddaughter Aya, who was also in the Centre with us during the attack. I channeled all of my emotions through writing something so that my granddaughter can understand and to ease her loss, so this is where it started,” explains Maysoon.

“Because March 15 brought a lot of awareness to discrimination and people not being included, it can fit well with social cohesion and bringing more understanding of the Muslim community and marginalised communities,” explains Maysoon.

Open Day at the Mosque features a common event where mosques around Aotearoa welcome people to visit. “It shows what we do in the mosque, our values and traditions, and who we are,” she adds.

Aya and the Butterfly tells the story of Aya, who has lost her father. Aya’s father’s death is implied, but this is not the story’s focus. The focus is on how we say goodbye to the people and things we love, and how the cycle of life continues.

“The artist Jenny Cooper did a wonderful job – we became friends. She came several times and met the family, who all feature in the book. I’m the grandma and my husband, Dr Mohammad Alayan, is the one who is injured and in a wheelchair. Aya is my granddaughter, Abdallah is her uncle and Haneen is her aunt,” says Maysoon.

Apart from the poignant dedication to those from the Muslim community, whose lives were forever changed, the book doesn’t explicitly deal with the mosque attack and that’s deliberate.

“It’s a very subtle way of dealing with loss and helping to build up resilience for those children; to know it’s okay to be sad, but at the same time, life goes on with the support of family members. And that it’s okay to remember the person – keep their legacy and they can still be alive with you,” reflects Maysoon.

Aya and the Butterfly is the first book published in Arabic by the Ministry and that’s very special to Maysoon.

“Wherever Muslim families come from, their aspiration is to learn Arabic because it is the language of the Qur’an/Koran. When they see this kind of resource it gives them a sense of familiarity and belonging for our learners in early learning centres or primary schools. It is also a tool for families and their children, who are learning both languages – sometimes parents are learning Arabic with their children. The children can see themselves in the language,” says Maysoon. 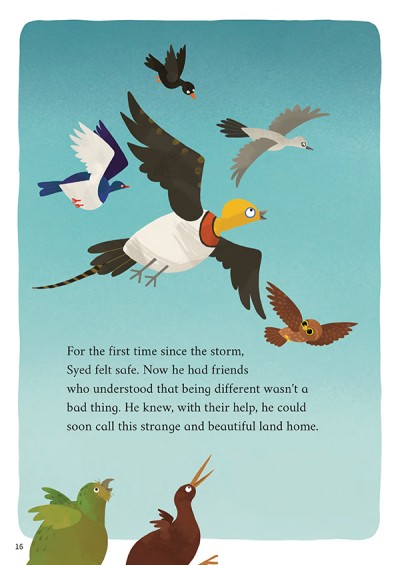 Drawing on his experiences of growing up as a Muslim in New Zealand, Mukseet Bashir says writing Welcome Home was both enjoyable and cathartic. He agrees with Maysoon that it’s important for children from different backgrounds to see themselves in stories.

Mukseet’s thoughts on racism and being Muslim were first featured in the media in the days after the mosque attack.

“I felt a certain responsibility because for a lot of people I may be the only Muslim person they know.

“The mosque shooting was shocking without being surprising – there’s a history of this in different ways in the things that we face. It was just to say that we need to be vigilant and consistently better. The response in the aftermath to the shooting is the easy part; it’s the long-term change and change in mindset that’s important,” explains Mukseet.

In Welcome Home, Syed, the sandgrouse, is picked up by a storm and carried far from home – to Aotearoa. Rebuffed for being different, he eventually finds a welcoming group of diverse birds who make him feel safe in his new home.

“In writing the book, it’s not the experience we had – it was more difficult. I didn’t necessarily feel welcome at times throughout my childhood, and throughout my life. To see the names like Syed and Nazneen, and to see it’s written by someone with a name like yours; that’s progress and I think that makes children feel less alien and more at home,” he says. 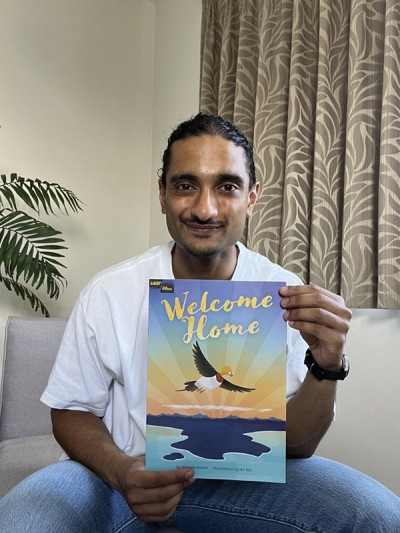 Mukseet Bashi with a copy of his book.

Mukseet works in finance, but he remembers what it was like to arrive in New Zealand with his family from Brunei when he was five years old.

“I was drawing on my experience of being Muslim, from Bangladesh heritage, but also some of my best friends are queer, or neuro-divergent – it’s about all of those differences and about the cross over between people and the celebration of those differences.”

While Mukseet didn’t meet illustrator Ali Teo, he was pleased to learn that she shared similar experiences, coming from east Malaysia.

“She’s done a wonderful job, it really brings it to life.”

Originally from Somalia, Nesra Wale, author of  Ko Wai Au? – Who Am I? also arrived in Aotearoa when she was very young.  She has done all of her education, including university, in Kirikiriroa Hamilton and the beginning teacher is passionate about helping tamariki to explore a multicultural identity.

Ko Wai Au? is inspired by Māori pepeha. The traditional introduction structure has been adapted to focus on universal dimensions of identity, such as connections with family and friends and preferences for food and activities.

“We chose the title Ko Wai Au? because if you are talking about multiculturalism, you can’t really discuss it without talking about the blueprint of Aotearoa and the importance of Māori culture, which is the backbone of our society,” says Nesra.

“That’s why it’s bilingual because if we’re trying to create a space that’s more inclusive, we first and foremost have to start by being respectful to the indigenous people of Aotearoa and the important role they play in New Zealand schooling. I remember when I was growing up, I went to Arabic classes but I also did Kapa Haka which is a fusion of two cultures.”

It was important to Nesra to include te reo and te ao Māori in the book.

“What is really important for me is that what works for Māori, works for all, so by making this book include te reo Māori, I wasn’t appropriating the Māori culture, instead, I was appreciating it and bringing it into New Zealand schools, as it should be. I could have just called this book Who am I? but I don’t think it would have had as much impact as it does when it’s in te reo.”

Ko Wai Au? – Who Am I? was developed by Nesra and

Somali students in her Year 3-4 class at Silverdale Normal School and tells the story of a fictional Somali child Abdiraman, with real life photographs. The children in the book are named after some of her students, and some of them were photographed by her sister, Samiira. 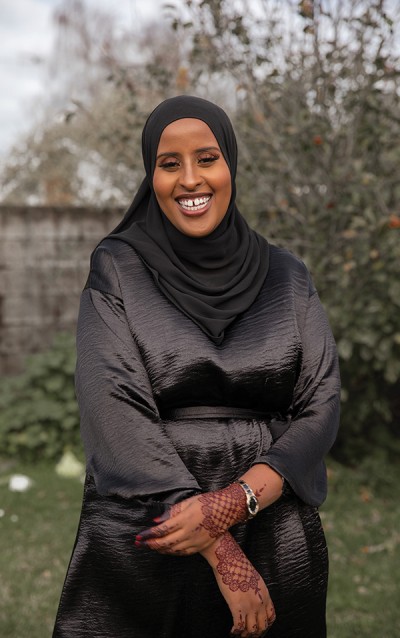 Nesra Wale is passionate about helping tamariki to explore a multicultural identity.

“I think it’s really important to have representation of different cultures. Within my few years of teaching, I’ve noticed how much of a difference it makes when children see someone who looks like them.” says Nesra.

“Often we have kids that are just learning English and it’s such a daunting idea to them that one day they will know the language and be able to process it. I think it’s really nice to see someone who not only speaks their native language, but also speaks English.

“At the end of the day we have these things that make us who we are and we’re all different, but at the same time, we’re all kind of similar. If we know a person, then we’re more able to be understanding of that group of people. It’s normalising that these kids, who are growing up here, are just like you.”

The storybooks are designed to be read to tamariki, by kaiako or whānau, and are intended for both Muslim and non-Muslim tamariki throughout Aotearoa New Zealand. Aligned to Te Whariki and The New Zealand Curriculum, the books cater to tamariki in early learning and Years 1–3.

The focus of the series is on wellbeing and resilience, and promoting unity, diversity, and inclusion. The kaiako support materials (KSMs) incorporate these purposes into the learning discussions and activities.

The print versions of all the books, including Aya and the Butterfly in English and Arabic, started to arrive in early learning services and primary schools across Aotearoa from November 2021.

The time is now: education’s contribution to a climate resilient future

The time is now: education’s contribution to a climate resilient future