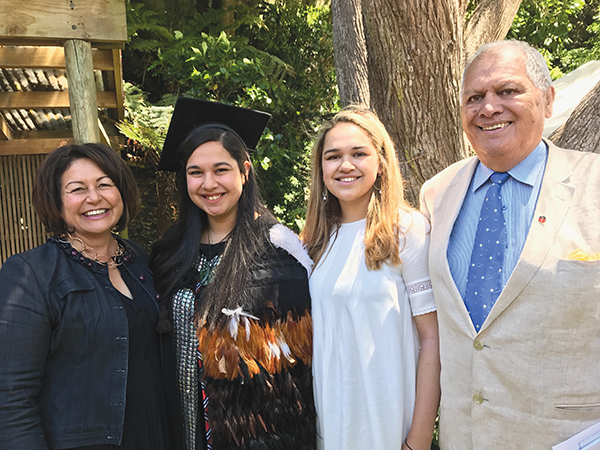 The prestigious Manakura award for leadership is only awarded every three years. Sir Wira Gardiner received the award this year in recognition of his leadership, commitment and mahi demonstrated over the course of many years. He joins a prestigious list of Manakura recipients.

For Sir Wira, receiving the award was extra special as his daughter, Rakaitemania Parata Gardiner, also became a Ngārimu Scholar.

Former Minister of Education Hon Hekia Parata, Sir Wira’s wife and Rakaitemania’s mother, is also a Ngārimu Scholar, and was an active chair of the 28th (Māori) Battalion and Ngārimu VC Board from 2011 to 2017.
Hon Parata considers securing funding for the writing of the history of each Battalion Company amongst her proudest achievements in that period.

With Sir Wira in Wellington, Hon Hekia and their younger daughter, Mihimaraea, in Gisborne, and Rakaitemania at the University of Waikato, they took to the family WhatsApp group to share congratulations when the news came in.

“This scholarship means a lot to my whānau and to be considered worthy of it was overwhelming – in a good way,” says Rakaitemania. “I was, and continue to be, very proud.”

Rakaitemania says the Māori Battalion has been “a real and living thing” in her whānau and in her life.

“I whakapapa to Te Moananui-ā-Kiwa Ngārimu through my mum, Hekia on my Ngāti Porou side and my dad, Wira on my Te Whānau-ā-Apanui side – both Ngārimu Scholars themselves. I hoped to be meritorious enough to honour that whakapapa and legacy.”

It is a legacy that began in World War II. After leading the 28th (Māori) Battalion, Second Lieutenant Te Moana-nui-a-Kiwa Ngārimu was killed in action in 1943 at Tebaga Gap, and posthumously awarded the Victoria Cross later that same year.

Sir Wira was born after Ngārimu’s death and went on to follow in the footsteps of his second cousin.

“I became a soldier as well – not as esteemed as Ngārimu, but I did reach the rank of Lieutenant Colonel, and I retired from the army having spent 20 years as a soldier,” he says.

A staunch military historian, Sir Wira has written two books on the Māori Battalion and is in the process of writing a third. He’s also been a family representative on the Ngārimu committee.

“So all of this military history, this whakapapa, these connections, this story all come together with my daughter winning her scholarship and me receiving this award,” he says.

From ward of the state to soldier

Today, Sir Wira is the newly appointed Chief Executive of Oranga Tamariki. But at age 10, he was a ward of the state.

“I was arrested for leading a shoplifting gang. The courts sent me to my grandmother, and so from the age of 10, having been a little criminal, I became a model citizen – if one could be a model citizen at age 10 – and my grandparents provided me the safety and security that laid the foundations for my life.”

Sir Wira describes his time in the military service as the most formative years of his life. When he turned 18, he joined the army, and went to Australia for four years to train at the Royal Military College. Upon graduating, he became an officer in the New Zealand Army. He served in Malaya, Vietnam, and in other postings around the world.

While he was a soldier, he was awarded a scholarship to finish his bachelor’s degree at the University of Canterbury. Another scholarship – possibly the only one to have ever been awarded internationally in the military – took him to King’s College in London, where he studied the ethics of warfare. He then returned to New Zealand and finished his time as a solider.

“So that set me up to be the kind of person that I am, in the sense that no problem is too big, too much of a challenge, that I identify the parameters of the challenge, then take and divide it up and take a bit at a time, then progressively you beat it.”

It’s an ethos that’s served him well. Sir Wira has been the founding director of the Waitangi Tribunal, the founding and general manager of the Iwi Transition Agency, and the founding chief executive of the Ministry of Māori Development. He’s been the chair of the Tertiary Education Commission, Local Government, and Te Papa, among other roles.

“It all comes back to the grounding that I got as a young solider in the New Zealand Army,” he says.

Making of a leader

This time has also helped shape him as a leader. He reflects on his time commanding 30 New Zealand solders.

“New Zealand soldiers will not do something because you ordered it. You have to persuade them to do it. If there’s an enemy firing machine gun bullets at you, and you say ‘charge’ to New Zealand soldiers, they won’t go unless two conditions are met. The first condition is that they have confidence in your leadership. The second condition is that they’ll know that you’ll charge too. Otherwise, they won’t. So, you have to gain their confidence, and make them believe that anything is possible.

“Throughout my life, I’ve used that principle of leadership; identify the people you work with, create the team to achieve the objective, and then go after it. I think that’s an important lesson for young people: be clear about what your objectives are, and put your head down and backside up, and keep going.

“And don’t ever give up, because it’s often too easy to say, ‘it’s too hard, I think I’ll go home now’. If you persist and take one step at a time, you’ll eventually get to the objective. I’ve adopted that kind of approach for anything I do. Identify; be clear about what the objective is; don’t have any ambiguity; get the resources you’ve got; and get on with it.”

“In the case of our daughter, who wants to work in law and policy both here and overseas, she’ll get there, but the Ngārimu Scholarship means that she can focus on getting to the objective – to graduate with first-class honours.”

A New Zealand teacher made some interesting observations on cross-curricular, project-based learning in the US as part of her Fulbright Award.

Pursuing a passion for teaching

Education Gazette asks two TeachNZ Kupe Scholarship recipients about the impact the scholarships have had on their teaching journey.

A New Zealand teacher made some interesting observations on cross-curricular, project-based learning in the US as part of her Fulbright Award. Read more

Pursuing a passion for teaching

Education Gazette asks two TeachNZ Kupe Scholarship recipients about the impact the scholarships have had on their teaching journey. Read more