A mat for all to stand on

In the second of a two-part series on the history of early childcare and education in Aotearoa, Emeritus Professor Helen May shares with Education Gazette the origins and development of Te Whāriki and how its principles align with ideas voiced by policy makers and educationalists over a century ago.

Click here to read the first article in this two-part series.(external link) 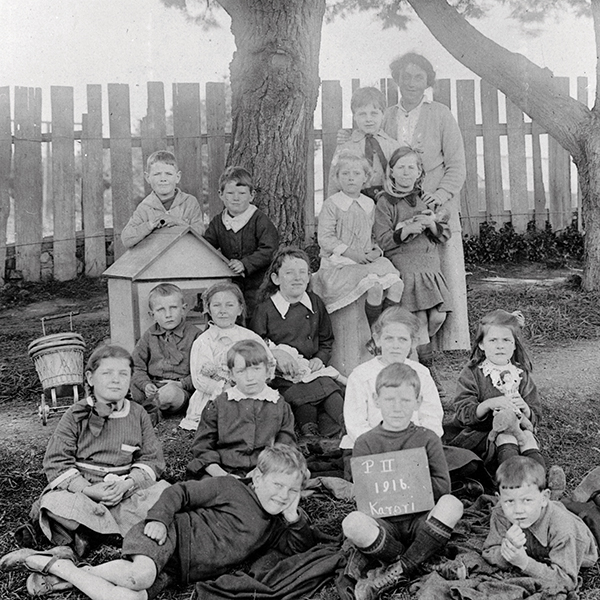 Miss Dolly Edwards with her Primer 2 class children and their new educational toys at Karori School in Wellington in 1916. Miss Edwards was known for introducing 'modern methods' into the infant classroom. (Ref: ATL 159173 1/2).

After decades of advocacy, early childhood emerged in the 1980s as a key policy area for government. A flurry of reports, including Education to be More (1988) (referred to as the Meade Report) and Before Five (1988), provided a philosophical rationale for increased government support and a blueprint for a more equitable playing field across the early childhood sector.

“Most significant was the recognition of the early childhood diploma/degree as the benchmark qualification for the sector and the plan to deliver 100 percent qualified teachers in teacher-led services.

“In 2007, 20 hours’ free early childhood education was also introduced for all three- and four-year-olds; both initiatives were accompanied by significant funding increases,” says Helen.

Meanwhile, in the aftermath of the introduction of Curriculum Framework (1990), the Government initiated the idea of an early childhood curriculum. The idea was not welcomed initially by early childhood organisations such as Playcentre, kindergarten and kōhanga reo; they were concerned that their distinctive pedagogies might be undermined and that the school curriculum might be pushed into the early years.

This prompted Helen and her colleague Margaret Carr at the University of Waikato to bid for the contract to develop an early childhood curriculum.

“We gathered an amazing team of expertise from across the sector, to the extent we were the only bidder. This was a political lesson in unity,” says Helen.

“We had been doing interesting things at Waikato when we established our integrated diploma/degree in 1990. Instead of adapting the old kindergarten programme and adding in some childcare, we reimagined what early childhood teacher education could be.

“We shifted the focus on ‘ages and stages’; treating the play activities as subjects alongside ‘easy’ versions of the school subjects, to more complex understandings of learning with children’s interests and strengths at the centre. These ideas we took into the curriculum project.”

Working with Margaret Carr, Dr Tamati and Mrs Tilly Reedy, Helen was the co-director of the Early Childhood Curriculum Project (1991-2) that became Te Whāriki and was released as a draft to centres in 1993. Helen and Margaret formed a partnership with Te Kōhanga Reo Trust and their proposal to the Ministry of Education was to construct a bicultural framework. 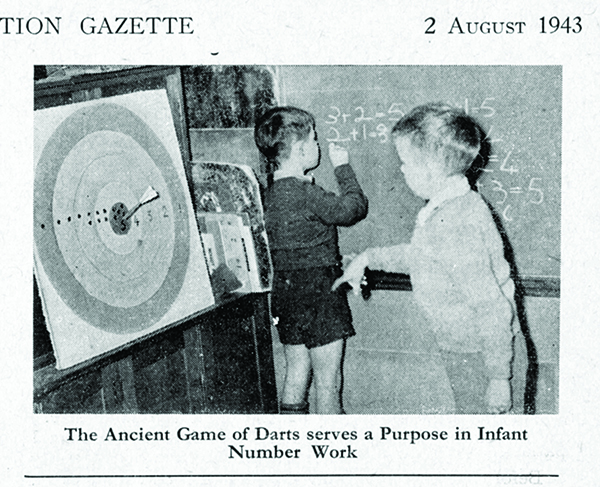 From the Department of Education’s new ‘discovery approach’ to arithmetic in ‘Number work in the Infant Room’ (1943).

“This was new territory for the Ministry in terms of curriculum development and it took considerable negotiation that there would be one document that could be ‘read’ from different perspectives,” says Helen.

Together, the group agreed on four overall principles and were gifted the five domains of mana along with the Te Whāriki name from the Māori working group. This became the Te Whāriki framework as a ‘mat for all to stand on’ with many woven patterns.

“There was wide consultation with teachers and across early childhood sector groups, who soon saw how they could ‘weave’ their distinctive pedagogy and philosophy within principles, strands and goals of Te Whāriki.”

Helen says this built a degree of trust that the new curriculum would not undermine the different services.

“However, there was no naming of pre-school activities, areas of play and equipment lists, which had been the focus of kindergarten and Playcentre in particular. Rather, the curriculum whāriki, underpinned by the principle of empowerment, was about ‘responsive reciprocal relationships with people, places and things’.

“Over time, teachers have risen to the challenge of a curriculum that does not tell you what to do, but rather challenges you to engage with children and their whānau weaving a curriculum together.

The 1993 draft of Te Whāriki detailed the connections with the NZ Curriculum Framework (1990) and elaborated how each principle, strand and goal might be realised in a junior school setting.

“Unfortunately,” says Helen, “schools never received copies of Te Whāriki and so the connections languished until the 2007 redrafting of the NZ Curriculum Framework, which defined five key learning competencies parallel to the five domains of mana in Te Whāriki.”

There was research undertaken demonstrating how the framework’s key competencies and the learning dispositions of Te Whāriki could be made visible across both settings.

“However, the introduction of National Standards in 2010 and their focus on the assessment of the 3R’s undermined these links, causing many centres to focus on preparing children for their school assessments rather than schools preparing for the children as they arrived,” says Helen. 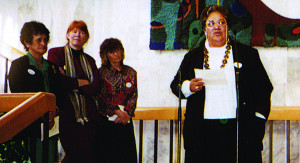 The launch of Te Whāriki in 1996 at the Beehive. Mrs Iole Tagoilolagi, who co-ordinated the Pacifica strands, is speaking. Standing by is now-Dame Iritane Tawhiwhirangi, Professor Helen May and Professor Margaret Carr. Originally published in Education Gazette.

The links between early childhood and school curriculums were made more explicit in the 2017 refresh of Te Whāriki. And in 2018, after the removal of National Standards, NZEI Te Riu Roa and the Ministry of Education co-hosted a series of conferences celebrating curriculum and the respective curriculum documents, encouraging teachers in schools and early childhood to reimagine their classrooms and centres in these new times. Helen’s presentation was titled ‘Taking Te Whāriki to school – Let’s do this now’.

“I fielded a number of enquiries from junior class teachers wanting articles and research to convince their colleagues that more playful learning in the juniors would not undermine the teaching of the 3R’s. Quite the reverse.

“It does, however, sadden me when I hear of schools purchasing ‘discovery’ packages from elsewhere when we already have Te Whariki.”

As a judge for the Prime Minister’s Education Excellence Awards in 2019, Helen visited Waimairi School in Christchurch to view a junior school programme embedded in Te Whāriki. The school was an award finalist.

“Not only was their ‘permission to play’ freely and purposefully expressed in the juniors, the senior classes also had blocks, dressing-ups and junk construction areas. This was the kind of classroom I had experienced in the 1960s-70s which I thought had been lost – but was now being rediscovered in new ways and for new times.”

Prior to her academic studies, Helen worked as a junior class teacher of mainly five-year-olds for nine years in the 1960s and 1970s, leading an all-day play-based programme.

Permission to play – the historical context

During the early 20th century, waves of so called ‘new education’ ideas promoting playful and activity-based approaches to learning swept through the education system.

When George Hogben was appointed Inspector General in 1889, he set about reforming the primary school curriculum, urging inspectors and teachers that:
“The important thing ... is not the amount of things that are taught, but the spirit, character, and method of teaching in relation to its purpose of developing the child’s powers… We must believe with Froebel and others of the most enlightened of the world’s educators, that the child will learn best, not so much by reading about things in books as by doing: that is exercising his natural activities by making things, by observing and testing things for himself; and then afterwards by reasoning about them and expressing thoughts about them.”

“This statement resonates 120 years later, but some teachers still find such approaches a challenge,” says Helen.

There were many who did experiment, such as teachers at Kelburn Normal School in Wellington, Wellesley St Normal School in Auckland and the Wanganui Central Infant School, where Montessori activities were introduced and formal desks abandoned. This was encouraged by the Department of Education.

“Kindergartens were less interested in Montessori but they did use the apparatus, and were still at the forefront of some of the progressive ideas.” says Helen.

She gives the example of Phillipstown Kindergarten, with the first open-air kindergarten in 1923 before the more famous 1924 open-air classrooms at Fendalton School in Christchurch.

The appointment of CE Beeby as the Director General of Education in 1939 hastened the adoption of play-based learning. Political approval was made clear by the Minister of Education, Rt. Hon. HGR Mason, at the 1944 wartime education conference:

“Nothing short of a revolution has taken place in the infant room over the past 20 years. It has my full support. We must agree that for all in the infant room, the learning of formal intellectual skills is of secondary importance. What is of supreme importance is that the young child should be healthy and happy. That he should learn to work and play with other children and his mind should be kept lively and eager and full of wonder.”

“This is my favourite statement from a Minister of Education,” says Helen.

Infant classrooms were expected to have at least an hour of developmental play every morning. In 1949, as the new era in playful schooling got underway, the Department of Education set about convincing parents with the film The first years of school produced by the National Film Unit, with music composed by Douglas Lilburn and played by the new National Orchestra.

“While there was an element of propaganda in the film, it did represent a ’revolution’ in thinking about education pedagogy showing how the traditional 3R’s could be taught within a programme of free play, discovery and conversation,” says Helen.

“Sadly, not all teachers felt able to follow script and the recorded memories of children from this era do not always tally with the official view that a ‘revolution’ had occurred.”

There was a similar ‘revolution’ underway across the kindergarten movement. Periods of free play had long been included, but were tightly timetabled. 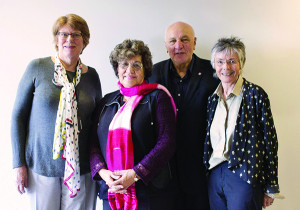 Writers of the original Te Whāriki. Professor Helen May, Lady Tilly Reedy, Professor Sir Tamati Reedy and Professor Margaret Carr. Photo taken in 2016 when they were advisors to the refresh of Te Whāriki.

In 1948, Beeby appointed Infant Advisor Miss Moira Gallagher as the first Preschool Officer in the Department of Education. She visited every kindergarten, encouraging them to let go of their structured routines. Joyce Barns, a teacher at the Kelsey Yarella Kindergarten in Dunedin recalled the visit:

“She said, ‘Let the children be free’. I talked it over with the girls I was working with and we let the children free because it was more natural. We didn’t have a timetable anymore, we let them do what they wanted to. We let the big boys go outside. You could see them sitting on the mat bored to tears, bored, absolutely bored. They played outside nearly all morning – and the difference in them! We even let them go to the toilet when they wanted to!” (Interview with Helen May, 1994)

“So, we have come full circle as these were the influences on me as a young teacher in the 1960s-70s,” reflects Helen.

“A school inspector once wondered whether my university studies would be wasted if I intended working in junior classes. Fortunately, attitudes have mainly changed!”

Helen says there is still more work needed to achieve real equity for children and teachers across the sectors and early childhood services. “He Taonga te tamaiti – Early learning action plan 2019-2029 agreed between government and the early childhood sector, if fully implemented, would address much of this.”

A long morning at play for children in the J1 classroom of Helen May (then Helen Cook) at Brooklyn School, Wellington, 1974.