A campaign to reduce lunchbox waste rubbish to zero, and encourage healthy lunches, has been transformational, says Gary Roberts, principal of Hornby Primary School in Christchurch. 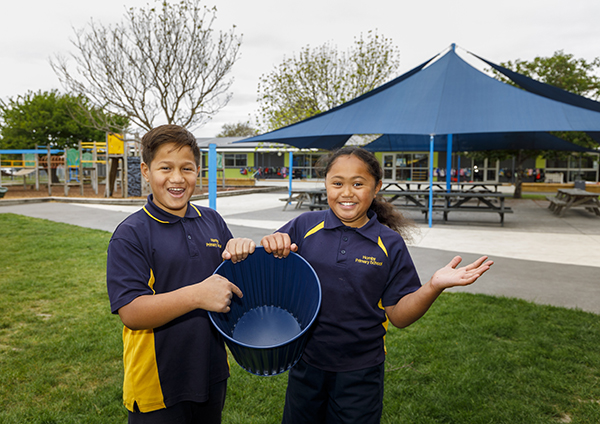 'No waste to be found at Hornby Primary School!' say Carez and Jazaky.

Gary says the campaign has probably been one of the most successful initiatives he has been involved in.

“I think if you target the audience in the appropriate manner, involving children and using social media, you can make a difference,” he says.

In less than two months in Term 3, Hornby’s Zero Waste Healthy Lunch Challenge resulted in healthier lunch options, improved concentration after lunch and up to a 98 per cent reduction in waste from lunchbox wrappers, say Gary and Heather Matthews, who has led the campaign.

“We noticed that the lunches were just processed stuff and not that healthy. You might see one lunch box with five little packets of chips, two muesli bars and a yoghurt,” says Heather.

“It was a double-pronged attack; a focus on some ideas we can provide for cheap healthy options – and also around zero waste. We were getting lots of rubbish flying around our playground, which happens in many schools throughout the country – yoghurt pottles, chippie packets etc,” adds Gary.

Begins with a Bento lunchbox

To get buy-in from parents, Heather says the school provided whānau with tools, including Bento lunchboxes and a weekly menu with realistic and attainable lunch ideas.

“Before we launched the initiative, I did a whole lot of pricing and setting of menus at Countdown, Hornby. We bought prize vouchers from Countdown and a local restaurant, Fush, provided vouchers for free children’s meals for every child who came with zero waste in their lunch.

“I sourced a couple of hundred Bento lunchboxes from Sistema. Then we launched it to the community on Facebook and through our online newsletter Hail.  We got the first menu and video online and sent home the lunchboxes – all named. Having everything ready to go was the key to making it work,” says Heather.

Weekly online posting of a menu with ideas, a shopping list with pricing and a video with children talking about the contents of that week’s lunchbox, was an important part of community engagement.

“Our school leaders have been the ones doing the videos and also going around the classrooms and collecting the data. But we have also had two five- and six-year-old children star in a video. We have a shopping list and a menu plan that goes out for whānau,” explains Heather. 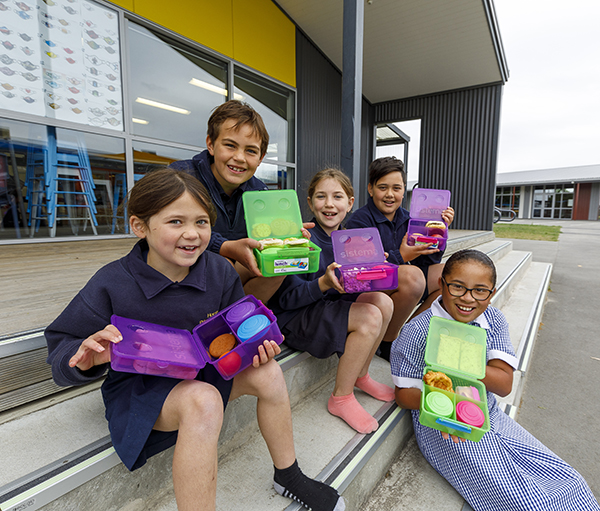 Whether through a lack of knowledge, skills or application, some children were turning up to school without a healthy lunch, says Gary.

“We would have some children turning up here with a big bag of chips and a packet of biscuits for their food for the day. I think actually showing people how they can do it and pricing it, has had a major impact on this campaign.

“When the first menu went out, a mother said to her teacher how excited her Year 6 son was. He was up ready making his lunch for the next day!” he says.

The menus included a sandwich, wrap or bread roll with protein in it, a piece of fruit and a snack.

“We kept it real regarding the food choices because we know we’re not going to turn everything around at once. But even just having a sandwich with a bit of protein in it is better than having a packet of chippies,” says Heather.

“We have noticed a lot more sandwiches, rolls, wraps, cut veges and fruit, a lot of home baking. It was a huge turnaround,” she says.

“The children are loving the food – it is a lot more nutritious. We are noticing better focus in the afternoons after lunch. Even after the first week there was a huge change,” says Heather.

As well as eliminating waste, Heather says they wanted to help families save some money.

“We tried to show them that by decanting big bags of things into a lunchbox, they could stop waste and save money,” she says.

Other spinoffs are that children are proud of their lunches; some have started making their own lunches and some of the youngest children, who can take a long time to eat their lunches, now manage to finish eating their lunches because they’re not spending time opening up packets.

Within a matter of weeks, rubbish from lunchboxes was dramatically reduced – by mid-September 97 per cent of tamariki were bringing zero waste lunches to school.

“In the classroom in the morning, they show us their lunchboxes and we just have a tick chart – it takes five minutes. Then all of the results are collated across the school and we come up with a percentage,” says Heather.

“In terms of zero waste, our caretaker has seen a huge reduction in waste. He told me he would often come in on a Monday morning and pick up handfuls of litter that had caught up in plants, bushes and trees over the weekend. Last week he came in and picked up three pieces. I know myself, every day I would be picking up rubbish trying to set an example to the children. I also have noticed a huge reduction,” says Gary.

The challenge has been truly transformational in terms of zero waste and healthy options, says Gary. 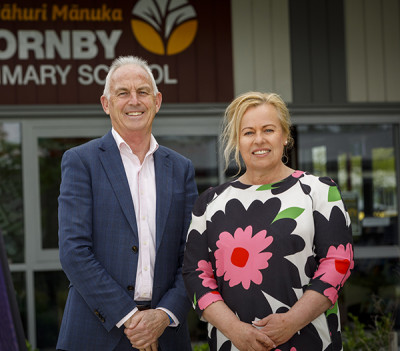 Gary and Heather have been delighted by the response to the Zero Waste, Healthy Lunch challenge.

“I know a lot of schools have tried healthy eating since I have been involved in education for 35 years, but we have tended to try to do it through the adults and I think this has been successful because we have done this through the children and having them actively involved in creating the menus and the videos and the reinforcement with the prizes. I haven’t seen anything better,” he says.

“We were communicating daily. One of the things we learnt from the first challenge is that you have to hit it every single day. What you focus on will provide the results,” adds Heather.

Hornby Primary School plans to continue with the zero waste campaign, seek ideas on tips and recipes for healthy lunches and continue community engagement through Facebook. 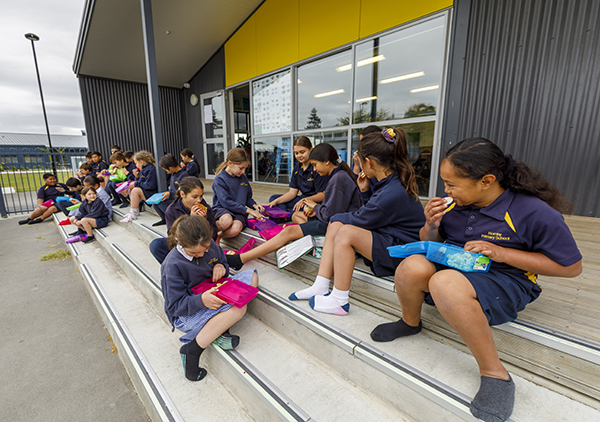 Tamariki at Hornby Primary School enjoy finding out what's in their lunchboxes each day.

All on the bus

For Hornby’s Healthy Lunch Challenge, Hornby Primary School built on strengthened community engagement, which grew from a 2019 Ministry of Education pilot resulting in a campaign to encourage tamariki to arrive at school before the 8.55am bell, says Gary.

“We were involved in a pilot with Ministry of Education around community engagement and we came up with some of the issues at our school. Children were not getting to school before the bell goes which puts them on the back foot for the rest of the day. We came up with a campaign called All on the bus, with the goal of having 100 per cent of our school population at school and ready for learning before the 8.55 bell,” he says.

All on the bus involved a term-long school and community-wide goal showcasing different routines to help children get to school on time. The same message was repeated and promoted through multiple channels:  Facebook, email, text, newsletter, noticeboard and summarised in a fridge magnet reminding parents of their roles in their child’s education.

“We made short video clips with helpful hints that we posted to help children and whānau around routines, time going to bed and having your school uniform ready the night beforehand. That was successful, but this zero waste, healthy lunch campaign has been more successful because we used a lot of learning from the All on the bus campaign,” he says.

Here are some of the strategies used by Hornby Primary School to engage their community:

These principles build on each other, and together form an experience of positive communication and engagement to help support parents and school staff with supporting learning and wellbeing.