Whanganui Collegiate School, established in 1854, is one of New Zealand’s earliest secondary schools and teachers and students alike are proud of its unique traditions and heritage; as well as the fact that 108 international boarders and staff formed one of the country’s largest isolation bubbles during Level 4 Covid-19 in 2020. 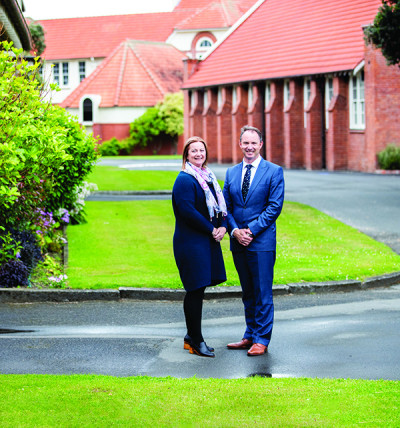 Wayne Brown, with his wife, Alycia, welcomes the opportunity to lead Whanganui Collegiate into the future.

Whanganui Collegiate School has been on the same site in central Whanganui since 1911 and while there are many architectural styles, including a new award-winning library and admin block, the buildings create an English village-like atmosphere.

Wayne Brown is the school’s 21st headmaster and is unapologetic about the school’s adherence to rules, standards and tradition.

“You do not walk on the grass, you do not have your phone. You meet and greet – eye contact and handshake. You have a standard that you have to adhere to – that’s called responsibility,” says Wayne.

“Character-based values underpin everything here. Academic excellence is our keystone because knowledge is really important. But I know that it’s the development of knowledge and character that’s going to be of good influence.

As a seven-day-a-week boarding school, with 88 percent of the roll of 310 being boarders, Wayne says the school has an opportunity to develop the whole child.

“Adversity creates resilience and our students need to be placed in that adversity – challenged and taken out of their comfort zones.

“I say there’s no place worth going that you can reach with a shortcut. We talk about that journey all the time,” says Wayne. 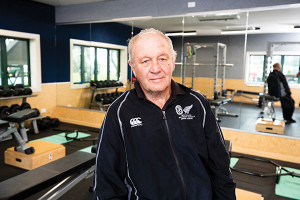 Alec McNab arrived at the school for one year – 48 years ago.

When Alec McNab arrived at the school in 1973, 24 years old and newly married, he was tasked with setting up and heading a PE department and establishing an athletics, track and field programme at the sporty school, where rugby, cricket and rowing predominated.

“I was at Loughborough University, a very big physical education college in the Midlands (in England) studying sport and Sir Peter Snell was there for a year. He knew Collegiate principal, Tom Wells and Tom said, ‘I want a young teacher who will specialise in athletics and get a PE department going’,” remembers Alec.

Known as one of ‘Tom’s Poms’, the proud Scot and his wife came by sea so he would have a chance to read, think and prepare for his new role.

Alec developed the physical education programme, and then was Director of Sport for 25 years overseeing a wide-ranging programme. He continues to coach elite athletes at the school.

Alec says that while some changes were subtle, the biggest change was the introduction of girls in 1991.

“Having girls was a brave step and I think the school did it extraordinarily well. Our first group of girls – 45 senior students – were real pioneer women. They had come to a very established boys’ school and had to make a presence – and they did. The first intake of junior classes at the end of the decade were similar. They were pretty out there, because they felt they had something to prove,” he says.

“It would be silly to say it hasn’t changed the school – of course it has. We’re reasonably close to 50/50 now. The girls were pretty tough mentally. The range of things those girls went on to do has been quite remarkable.” 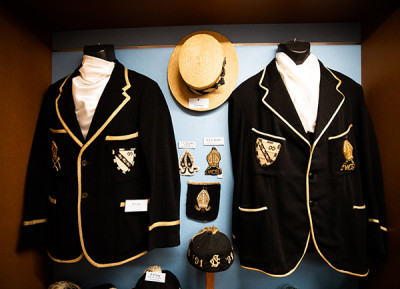 Old uniforms are displayed in the archives.

The sense of history is palpable at the 166-year-old school, where the Museum and Archives house a collection of artifacts and taonga dating back from the earliest days of the school: these include photographs, documents, uniforms, sporting cups and records and memorabilia.

Old boy Richard Bourne and his assistant Frances Gibbons proudly show Education Gazette a living database in which every student has been recorded – and continues to be recorded – since the school was established. The records show their achievements at school and what they went – and go on – to achieve in their lives.

Many of today’s students know that they walk proudly in the footsteps of their forebears.

“We have a lot of generational families and I say to them I want them to pave their own pathway: ‘you don’t need to pave Dad’s or Mum’s – pave yours,” says Wayne.

“There’s quite a big family background. There weren’t really expectations for me to come here – I wanted to come to this school. I almost felt I had a need to because there’s such a strong family history here,” says James.

“You feel more at home, because my dad gets so excited when I tell him something about the school. He says ‘I did that too!’. Alec McNab coached my dad! The school is very traditional and it’s still kept a lot of that tradition,” she says.

From promise to character

For Wayne Brown, the ideal graduate of Whanganui Collegiate School is someone who can walk anywhere and contribute to his or her community.

“Our catchphrase is: Turning young children of promise into young adults of character.

“My ideal graduate is someone who is honest, takes responsibility, is accountable for their actions, trusts (people, the system, the process), has the ability to get out of their comfort zone; or to follow, challenges the norms of society, but respectfully; is not affected by the tall poppy syndrome and will be a lifelong learner because the lifelong knowledge that they pick up, along with their character will be of great influence,” says Wayne.

Whanganui Collegiate School headmaster Wayne Brown does a lot of reading about education and he has some firm ideas about incorporating the ideas of today into a school which is strong on tradition.

“It’s important that we hold onto those traditions and custodial uniqueness and at the same time blend it with 21st-century learning. For me it’s about holding on and developing those elements that are very true to the school.

“It’s very strong in character and character doesn’t change. Society changes in how we develop that character, but honesty and integrity are still the same and adversity still builds resilience. In 150 or 200 years' time there will still be levels of insecurity in our youth and we have to feed their aspirations and not their insecurities,” he explains.

While Collegiate does well in national league tables, Wayne is not a fan of them.

“It disappoints me that educationalists or schools have a focus on being placed on a league table on academic results. Education systems that are purely just concerned with OECD results, or academic tables and tabling one school against another based on academic results is not the right way to go.

“There has to be a balance because if we are wanting good rounded, facilitated citizens, we need to have them understand what contribution means,” says Wayne.

Having said that, he believes that the school’s philosophy of challenging students produces great results.

“All of these kids are really high achieving and if you take the hours that they would be involved in various activities and allocate them to academics, sure their results are going to go up, but we are still well above the national average in Decile 8-10 schools. Because they are involved in so many other things, it actually benefits their academics.

Wayne is an enthusiast for the seven-day-a-week boarding model and thinks that boarding school and a strong house system is a virtue in this day and age.

“You become part of the family within that house system. The benefit of boarding is the ability to gain greater resilience because there are peaks and troughs in boarding – there's a greater element of self-independence and more opportunities.

“Schools function from 8-3 – that's where they develop their knowledge. We develop a child’s character from 3 pm to 8am by taking them out of their comfort zone. We’re just warming up at 3.30!

“A lot of people ask me what’s the difference between a day in a boarding school and why? Very simple answer: in the day school you learn a series of lessons and then you get a test and we find where your knowledge is at. Boarding flips it around – we give you a test such as a compulsory activity or having to do something that you don’t necessarily want to do, but you do it and you learn a life lesson from it,” explains Wayne. 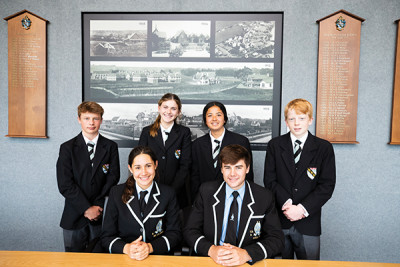 There’s a strong tradition of former students sending their children to Collegiate: L-R, back: Max, Bella, Kimiora, Jack, and (front) Leilani and James all continue their family tradition.

Head girl in 2020, Leilani says that Collegiate offers a range of lessons and values to take into life.

“Collegiate definitely pushes you to grow as a person and at the end of your school journey, you look back and you can reflect on all of the good times, all of the hardships and you can see how it contributes to your success and growth as a person.

“Education isn’t just in the classroom here. It teaches you to become a more rounded person. For example, with compulsory sport – I came from a school in Hong Kong and when I came over here, we had never really done sport and it wasn’t part of our daily lives. Then it was compulsory and the change taught me the importance of exercise and team work and that you push yourself to the max,” says Leilani.

Year 9 student Max, who boarded at another school from Year 6-8, agrees with his dad that boarding prepares you for moving out of home.

“Coming here was a lot different. We have a lot more people in the house and sharing a room – we had our own cubicles at my old school. But now sharing a room with someone else, you learn to live with them, getting to know what they like and don’t like or if they are upset, how to help them. I love it because you spend all your time with your friends,” says Max.

“I’m quite an introvert but I’ve been put in quite an extroverted position so I have been pushed to do many things that I wouldn’t normally do,” says head boy James.

“The school pushes you to do things you wouldn’t normally do, like I’ve had to speak in front of people and I have always hated that. They’re the kind of things you need for the future. I’m looking at going into law and that will require a lot of speaking,” he says.

With a school motto that translates from Latin to ‘Never a footstep back’, Collegiate’s goals are to develop the youth of today into tomorrow’s leaders.

“We know the youth of today are going to be our leaders and communities are only as strong as those who contribute to them. So we want to be able to provide that each and every student understands that ‘it’s not just about me, it’s about we’, and that’s tough in this day and age,” says Wayne.

Sometimes students don’t agree with some of the decisions Wayne makes, but he takes the long view.

“They understand as well that I’m making the decisions not just for now, but it’s a seed that is planted that will provide shade for the next generation. The ‘seed’ is the values for their children, and hopefully the communities will see the benefit of what they’re doing. When they do have the opportunity to reflect that, they will impart that so when the baton is passed on, hopefully they will pass it onto future generations.

“I’ve said all through Covid, maybe the world will actually listen now that we need to be able to have schools that have more emphasis on character education – and rigour,” says Wayne. 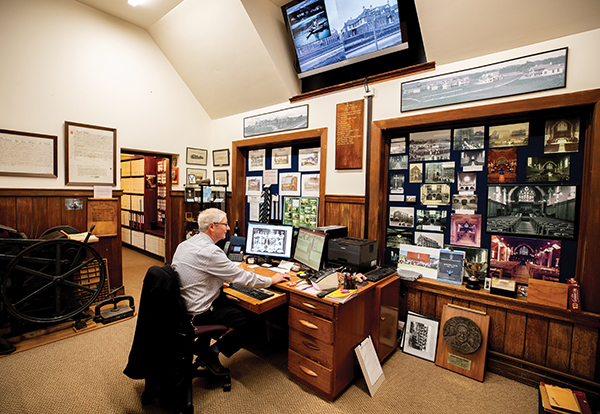