Springlands School principal Gaylene Beattie continues a long family association with the school since it was established in 1886. 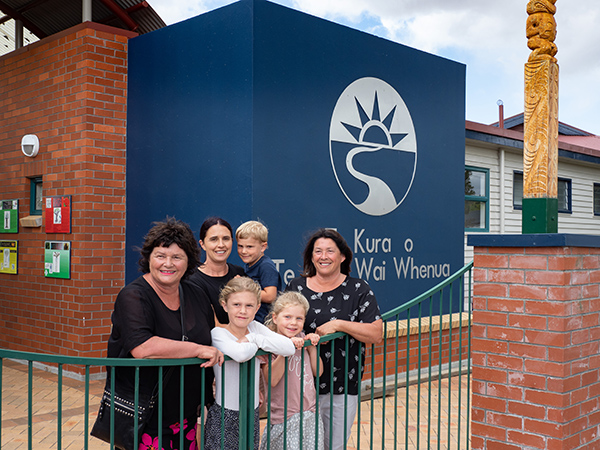 A whānau affair. Gaylene (right) and Claire with her daughter Rochelle and her children: Kye (4), Keira (7), Neive (5) at the school’s front gate.

Gaylene decided she wanted to be a new entrant teacher when, as five-year-old Gaylene Saul at Blenheim’s Springlands School, she was smacked for sitting in a corner and reading books at the ‘wrong’ level.

Now the principal, Gaylene attended the school in the late 1960s along with her sister Claire, when their mother Marie Saul was a teacher there – which is how a young Gaylene earned herself a smack.

“Because I had been at school with Mum quite a lot before I started school, I was reading at a higher level than I should have been. After being smacked, I actually tried to walk home – I always wanted to be a new entrant teacher so it wouldn’t be like that for children.

“As a principal I want every child to come in and have their first day to be really special, and for them to be acknowledged as individuals. That’s why I like the five-year-olds coming in on their birthdays rather than all together, says Gaylene.

Claire Hutchison (Saul) has taught at Springlands School since 1993 and is now a literacy specialist, as well as assistant principal.

“We have worked really hard to make sure the kids like being at school. We are now more similar to kindy when children first start, so the transition is smoother because we noticed there were some unhappy kids to start with,” explains Claire. 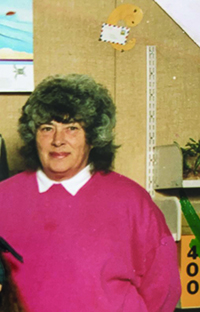 Gaylene and Claire’s late mother Marie began teaching in 1954, with some years out to raise a family. By the time she retired, she had taught a total of 27 years at Springlands School.

“Mum went back teaching when I was four and Dad looked after us at home. That was really unusual and his friends would say, ‘What are you doing?’ He had five acres of garlic and looked after that and us. He was a plasterer at the time and then he went into his own business,” remembers Gaylene.

Claire remembers the school being a lot smaller than it is today.

“When I was at school, and when I started teaching there in 1993, there were eight classrooms, now there are 21.

“In the 1960s, the principal lived on site – the house was in the school grounds where the tennis courts are now. He used to go home for lunch: his wife wasn’t a teacher, but she had a lot to do with the school,” she says.

In the 1980s Gaylene returned to her old school as a second-year teacher before teaching in Wellington and London. When she returned to Springlands in 1994, her mum retired.

“That was quite confronting at the time because I came back to be the equivalent of assistant principal and the teachers were Mum’s cohort of friends. I was their boss and I was only young. Mum retired that year – that was the deal: that she would retire if I got the job!” says Gaylene.

In the earliest days of settlement, most of the area to the west of Blenheim comprised swampy ground covered in flax, with water-powered flax mills producing fibre, which was much in demand for ships’ ropes.

As people began to build on higher and drier land in the suburb, which became known as Springlands, it was decided to build a school for up to 100 pupils. The school’s centenary publication shows that by 1932 the school had a roll of 168 pupils.

In 1969, the school had outgrown itself. Marie’s class, which included daughter Claire, was located in the Methodist church down the road until a new block of land was built and the school could expand.

As the suburb expanded, and with Bohally Intermediate and Marlborough Girls’ College down the road, the popular school consulted with the community and reduced the school zone in the mid-2010s. The roll is currently around 430 students.

“This is a really nice sized school now,” says Gaylene.

The Saul family lived in the area from before the school was established and can be seen in photos throughout its history, including one Audrey Saul, an unpaid pupil teacher in 1901.

To date, five unbroken generations of the Saul family have attended the school: Gaylene and Claire, their grandfather Mervyn, their dad Ray, their children; and now Claire’s daughter Rochelle Hegglun’s children.

Former pupils and teachers have strong ties, with many teachers staying for decades. Three of the current teaching staff were pupils, including Rochelle. Two of her three children, Neive (5) and Keira (7) continue the long line of Sauls who have been educated – or are educators – at the school. 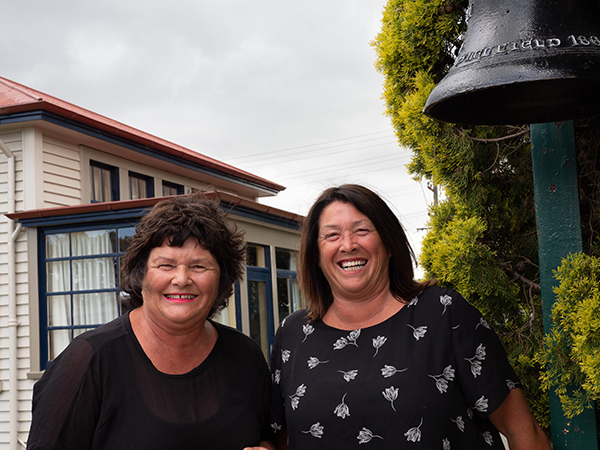 Claire and Gaylene with the original school bell, which is still used.

While they are proud of their family’s close ties to the school and its community, Gaylene Beattie and Claire Hutchison are pragmatic and forward thinking. Their long association with teaching in the Marlborough community gives them insight and perspective.

“The school today is more diverse and so teaching has got more complex. We try and give children a lot more opportunities based on the key competencies, as well as reading, writing and maths. We want them to be good citizens, to be able to collaborate and have character,” explains Gaylene.

“As a parent, you want them to achieve, but you also want them to be kind, good people and have the ability to be happy. Once you have an unhappy child, they can’t learn and it doesn’t matter what they are striving for,” adds Claire.

The demands of teaching in the 21st century can be challenging, but research, communication and collaboration make it work, say the sisters.

“There are lots of changes – lots of things come at you. Like: we’re going to add New Zealand Histories – oh, ok we’ll do that. We want you to teach a third language – yup we’ll do that!” laughs Gaylene.

But she and Claire say it is important to reflect on what the school is doing really well, ensure it suits their school vision and not leap at every new idea.

“It comes from research and best practice and wanting the education system to be better, but sometimes the political flavour takes them in one direction, then in another direction. We want to ensure that our teachers think something new is worth investing their time and energy in,” says Gaylene.

To maintain a steady direction, the school’s experienced leaders do a lot of talking and collaborative planning. Parents are also kept well informed. Teams plan together to ease the workload.

“We’re in paired flexible teaching spaces, which can be your own teaching space – or they can be paired. We follow the research under deep learning so children can work together if that’s better meeting their needs,” explains Gaylene.

“I think you have to have options for different children to be either in a quiet space, or a break-out space or working in a bigger group so your learners can have what works best for them – no one size fits all.”

“When I started teaching you were in your room and you were responsible for everything. In some ways, you could do whatever you wanted really. Whereas now you are working with other teachers. Some teachers are really open to collaboration and other people feel more comfortable themselves. They really work it out themselves,” adds Claire. 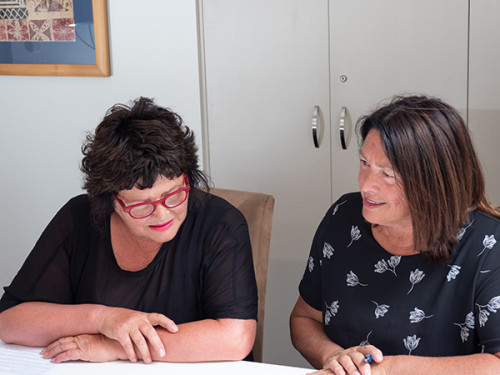 One of the biggest changes in Marlborough in the past six years has been collaboration between schools, with 21 schools and ECEs from Blenheim to Renwick; Tua Marina to Ward involved in the Piritahi Kāhui Ako. Claire was across-school lead for the first four years and Gaylene is currently a co-leader.

“I think that’s the real change in education in Marlborough. Before we were in silos, but one of our objectives is to learn from each other to improvement student achievement. We want to try and strengthen pathways for children so it’s seamless. It’s about schools collaborating together, using their strengths and strengthening the opportunities for children,” says Gaylene.

“It’s about equity, excellence and belonging. If you come to Marlborough, it doesn’t matter what school you are going to. It’s more of an even playing field because we are all agreed on certain key elements such as improving culturally responsive practice and strengthening leadership and teaching

With Māori whakapapa (Ngāti Kahungunu) Gaylene and Claire believe there should be a focus on educating children who understand and embrace Māori traditions. Nearly all children at the school are involved in kapa haka and can happily take part in a powhiri.

“We went to Wellington on a school trip and thought it would be great if we didn’t have to prepare our children to do a powhiri and it went from there. Then children were coming through from kindergarten knowing waiata and powhiri and we thought, ‘Why stop them there?’” says Gaylene.

All children learn the school mihi, developed in consultation with parents, students and staff in 2018.

“We try to build connections so that children feel they have roots and a sense of belonging to the school,” says Claire.

As part of this sense of belonging, each cohort of leavers presents a gift to the school. In 2014 leavers worked in consultation with a local artist to develop a magnificent mural that features key elements of the region’s landscape and portals showing the past and present, and a vision for the future.

The school’s beliefs are represented by kaitiaki, strands of rope that weave the values of respect together with the school’s whakatauāki – Ma te mahi ka ora – From hard work comes success.

The mural, developed by a cohort of school leavers, represents many facets of the school and its kaupapa.

From 1 July 2020 a new pilot fund will provide teacher aides with easier access to professional learning and development (PLD) opportunities.

Back on home soil – Teachers return to Aotearoa

Back on home soil – Teachers return to Aotearoa

Utaina! A Hui About Learning and Exploring Science in te reo Māori