Cross-curricular learning has long been the way at  Te Wharekura o Mauao in Tauranga Moana.

“About five years ago, we moved away from traditional teaching of subjects and silos where the students moved around the college every 50 minutes. We moved to cross-curricular project learning in the junior school and cross-curricular passion learning hubs in the senior school,” says deputy principal Jo Cameron.

“We do have some marau that we still teach as a separate specialist subject through the whole year – te reo Māori, te reo Pākehā, pāngarau and our senior sciences – because it is quite hard to meet the requirements of the tauira who want to do chemistry, biology, and physics for the university pathway, but all our other subjects are taught in our cross-curricular project or passion learning hub contexts.”

One of the kura’s passion learning hubs is Toi Whakaari, performing arts, and rangatahi present a production after 16 weeks’ preparation.

“Last year’s production was about Tākitimu. We put it on stage here at the Baycourt Theatre in front of 450 people for three nights and a matinee. And in order to put on that production in which the children could develop their dance, drama, music, kapa haka and visual arts skills (in terms of stage set and costume), everyone in the hub – 65 students – learned about the histories, from the Tākitimu waka navigating across the Pacific including Rangatira and the different islands where they landed before it landed here at the base of Mauao, then the stories of the tupuna who settled this place and where they settled.

“We also taught them about some of the key inter-iwi battles prior to Pākehā settling here. And then Pukehinahina and Te Ranga, the land war battles that we had in Tauranga Moana which have always been part of our curriculum. All our children are taught explicitly, and actively participate in the commemorations from when they are in Year 7. Then the Tauranga Moana participation in the Māori battalion in the World Wars through to the period of protest in the ‘70s and ‘80s, and the Dawn Raids.

“We have an amazing director and writer, Jason Te Mete, who works with the kura and he’s from Ngāti Hangarau which is one of the hapū whose land the school stands on. Jason wrote the script so that it was appealing to young people and had a strong message for young people about knowing where you are from and facing your future.

“All these stories were woven through; the students learned the stories, understood the history and the kaupapa and then took it to the stage. Then all their credits just fell out of that, the performance credits, the solos, the band, the acted scripted pieces, the dance, and Te Ao Haka.”

Jo says one of the reasons that the kura changed to project-based learning was because of the pedagogy that suggests that cross-curricular study is better for producing soft skills. 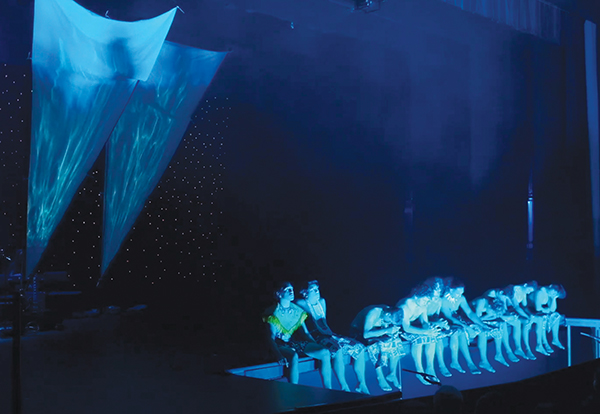 “The other reason was engagement; the students are far more passionate about being here and going to class because they love what they do. They don’t have to just do six subjects and fill the timetable. Even if there’s nothing there they really want to do, by the time they’re in Year 12, they only must do te reo Māori as a compulsory subject. They could be in our hub 90 percent of the week and doing three or four subjects within the hub. And they love it.”

An inter-house competition day held at the base of Mauao at Pilot Bay includes waka ama and ocean swimming races.

“The hub that plans this is learning about Tangaroa, stories of the Maramataka Māori, the tides, the water, and the environment. Māori knowledge, Mātauranga Māori, is all integrated. They do training plans for getting fit. They do water safety and waka ama standards and event planning. They learn about the traditional waka that led to waka ama, how Māori traditionally worked and lived on the water and then they run the event and their credits just tumble out.”

Te Wharekura o Mauao has a very clear vision of the graduate they aim to produce.

“There are three threads: a tamaiti who is culturally autonomous, a tamaiti who is intelligent and independent, and a tamaiti who has wellbeing and health at their centre,” says Jo. “The cultural autonomy, the understanding of their cultural heritage, and therefore having a place to stand and feeling confident about who they are is central to Te Wharekura o Mauao vision, goals, and whole purpose. It is why we were established, to be part of developing the next generation of Māori to lead Tauranga Moana. History is fundamental. You can’t understand why the world is the way it is, why these students live in the communities they live in, on the pockets of land that remain surrounded by the sprawling development in Tauranga Moana, unless you know what happened here.” 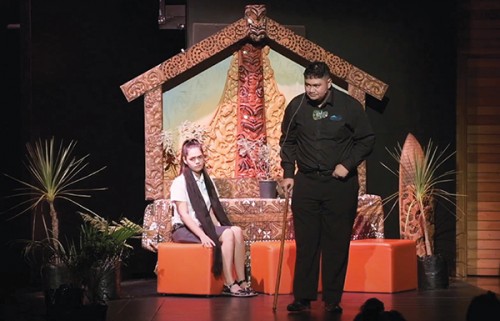 “The ‘Understand, Know, Do model’ was useful. Having those three big ideas and then the more directed contexts was useful in that I was able to see it was affirming what I’m already doing. It also made me think how there is so much in Social Studies and English and all these other subjects that we can make connections with. So, it was encouraging to be able to see where we could make cross-curricular links.

“I found the ‘Know’ part useful for seeing cross-curricular links and the ‘Do’ was encouraging for me to think about different ways of presenting information and different skills that I wanted the students to learn, it was idea-generating.

“One of the things that has been exciting is working closely with the Science department. I am absolutely not a scientist, but they have created a Rongoā traditional Māori medicine plant unit with their Year 10s and it has been great to make connections on those ideas. We are talking about doing a trip up to Te Motu Kairangi/Miramar Peninsula to look at the ancient Pā up there, to look at the plants around the area and the occupation. So, we are looking at history, social issues, biology, that sort of thing.”

At Tuahiwi School in Kaiapoi, North Canterbury, a transdisciplinary approach to teaching and learning has always been in place, says tumuaki Melanie Taite-Pitama.

“We don’t segregate wāhanga ako or curriculum areas, we teach as though we are in real life. If you go to the mall or the supermarket or interact with whānau, you are having to use a whole lot of different, essential skills so we integrate everything throughout each other.”

“We might look at how our people migrated from the East Coast to here and what skills they needed. In Maths they would have to know about directional compasses or mapping, you would be also framing your literacy up around whanaungatanga, and everything that you did in physical education would also be based around whanaungatanga. So, there is no special maths time or English time, it’s teaching tamariki from a transdisciplinary point of view, rather than a ‘let’s take out our maths books because it’s maths time’.

“That’s not to say that we don’t teach the fundamentals here because we do. Our tamariki do learn to read and write and do mathematics but they learn in a way that is conducive to their learning needs and regarding their goals, what they can do, what they can’t do and where we need to shift with them,” says Melanie. 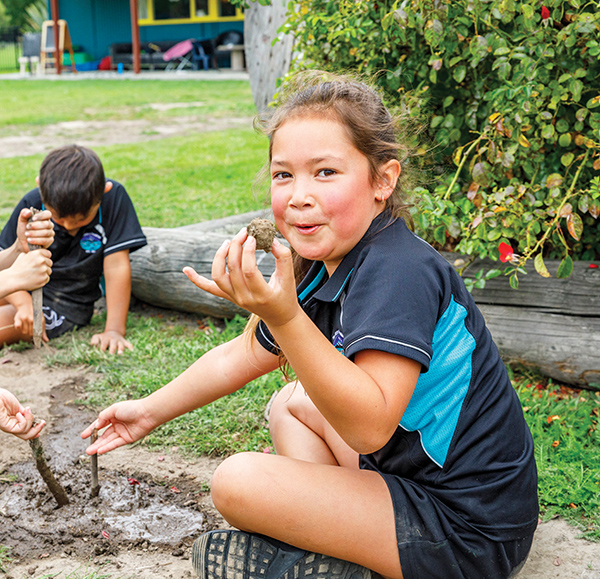 Learning at Tuahiwi School in Kaiapoi has always been centred on local history.

When Ben Christian started out in teaching, he noticed that enthusiasm for learning was high amongst students engaged in cross-curricular study, an observation that prompted him to develop Te Waharoa, a course that integrates local history both inside and outside the classroom.

“During my first two years’ teaching, I noticed that a lot of my students who were taking te reo Māori were really interested in te ao Māori, and they weren’t necessarily passionate about the language. They were taking the course because it enabled them to achieve as Māori. Then there were other students who were passionate about the course but needed more than one course.”

Ben is employed by Marlborough Boys’ College but is currently covering maternity leave at Kaikoura High School. He was aware that a Māori performing arts and a te reo Māori course were being run in tandem by a school in Tauranga and decided to emulate the concept.

Ben spoke with Māori history lecturer Dr Peter Meihana at Massey University about how he could best support students by, say, working alongside Marlborough iwi, Rangitāne, to incorporate more local history into the course.

Te Waharoa is a course that takes a holistic approach to te ao Māori. Rangatahi embark on a journey through Māori performing arts, te reo Māori, diving and gathering traditional kai, Māori history, and tribal traditions, carving and weaving, plus many other aspects of te ao Māori.

Students can visit the Wairau Bar which is one of the oldest archaeological sites in New Zealand. DNA research has shown that many of the people in Wairau are connected to these first settlers, including Ben’s students. Ben hopes that new curriculum experiences such as this will take place throughout the country as both kura and schools are able to find out their history and make connections.

“When you are looking at an area like the Wairau Bar, you are actually talking about a story of how people came from somewhere else to live here and everyone can connect to that in some way… whether you came here as a recent immigrant, or your ancestors came here in the 19th Century, or you are tangata whenua, you all share something in common, which is that at some point in time, your ancestors decided to call Aotearoa their home.” 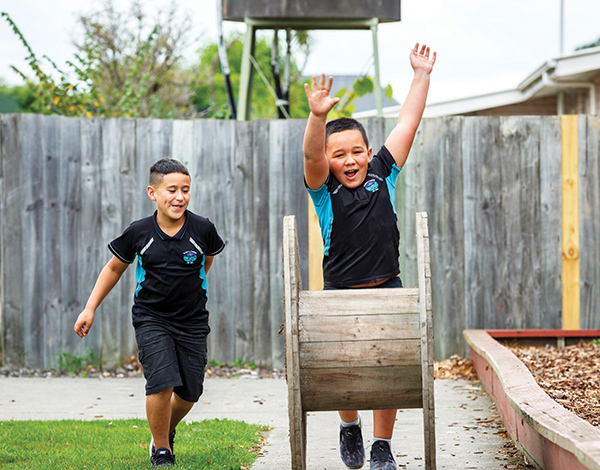 Tuahiwi School tamariki know the stories of their ancestors.

Te Takanga o Te Wā framework is designed to ensure ākonga develop a keen sense of identity to carry wherever they go in the world.

As Aotearoa New Zealand’s histories and Te Takanga o Te Wā is rolled out across the motu, ākonga share their thoughts about the localised content.

Te Takanga o Te Wā framework is designed to ensure ākonga develop a keen sense of identity to carry wherever they go in the world. Read more

As Aotearoa New Zealand’s histories and Te Takanga o Te Wā is rolled out across the motu, ākonga share their thoughts about the localised content. Read more