A strong desire to foster a sense of belonging and pride in cultural identity has led to positive outcomes for one Wairoa kura. 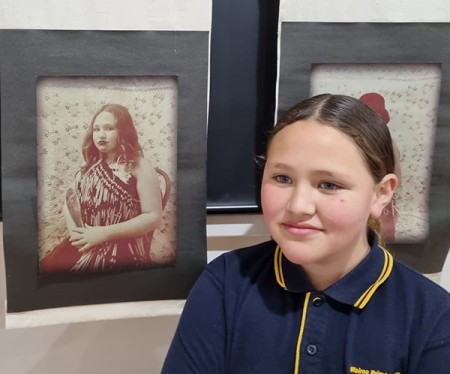 A student stands next to her self-identity portrait, which looks historical at first glance.

After coming across an old issue of NZEI Te Riu Roa’s Ako magazine, Wairoa Primary librarian Robyn Little and her colleague Anahera Pono Whakatope (resource teacher of Māori), were inspired to showcase some significant happenings at the school, while also helping to develop a sense of understanding and pride within the tamariki.

The premise of the project closely aligned with the Wairoa Primary School motto: ‘E tu tamariki ma; Ko au te akonga, ko te akonga ko au’, which means, ‘Our tamariki stand tall and are proud of who they are, where they have come from and where they are going; we are all learners together’.

At its core, Tuakiritanga promotes the ‘inner-being’ and encourages the flow of mauri ora through one’s self.

The end result of the project was a photographic exhibition of self-identity portraits.

An ode to the past, the portraits, in sepia tones, look traditionally historical at first glance – tamariki wearing taonga, adorned with moko and looking powerfully into the lens.

Principal Richard Lambert noted that understanding and upholding the tikanga behind the portraits, and the taonga the children donned, was extremely important and therefore there was a high level of consultation with whānau, as well as local kaumatua and kuia.

Initially, the project was to be shared at local Matāriki celebrations, which were affected by Covid-19 lockdowns. 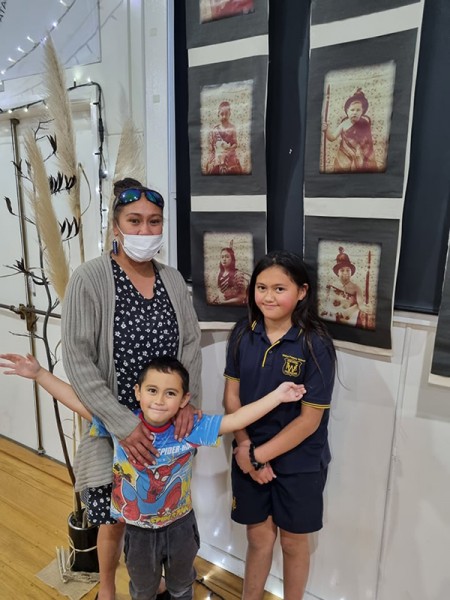 A mother sees her tamariki 'captured in time'.

With this in mind, the decision was made to share the images during the in-school exhibition, as well as at the District Wide Film Festival, which held the theme of ‘Tūrangawaewae’ (often translated as ‘a place to stand’).

Tūrangawaewae are places where people feel especially empowered and connected. They are often described as a foundation – a place in the world which feels like home.

Richard said this theme fitted perfectly with their project, closely linking to their idea that the project would ensure tamariki understood the importance of ‘Their Place to Stand’ and help them connect to their forebears.

“Kaiako encouraged tamariki to work with their whānau on this project; some took up the challenge of videoing visits to their marae or other places of significance,” he says.

Within the portraits, children proudly wore moko, kapa haka uniforms and treasured whānau taonga such as korowai and taiaha. Whānau allowed their tamariki to bring these to school – to share and celebrate with their peers and teachers.

Tauiwi and Pākehā students were also considered and empowered. Consultation occurred and they were allowed to wear period clothing, described by some as the ‘Colonial Look’. Others chose to wear traditional Māori dress, such as the school’s kapa haka uniform.

Notably, the learning ran deeper than the final product.

“Learning about, and connecting with, their whakapapa and heritage, including iwi, hapū and whānau, were some of the key themes,” says Richard.

The exhibition at school, which was followed by a kapa haka performance, evoked an overwhelming response.

“Whānau were beaming with pride during the exhibition and the tears shed were both with happiness, and some maemae in mind; parents and whānau seeing their whakapapa and tipuna ‘captured in time’ was overwhelming for some of the nannies and papas,” recalls Richard.

Ākonga, both Māori and non-Māori, were connected by the process with one remarking, “I’m not Māori, but I could be” and immersing herself in Māori culture throughout the process. 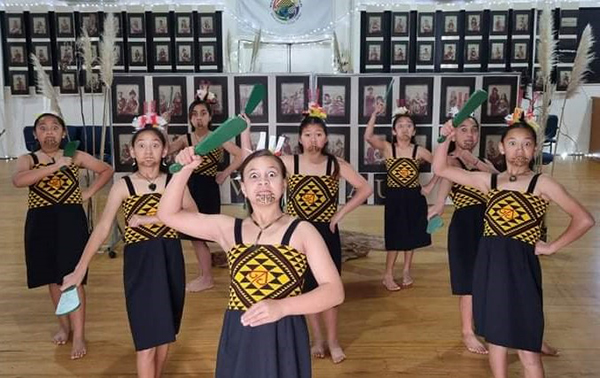 Upholding the tikanga: Girls pūkana in front of their portraits.

In future, Wairoa Primary plans to work with the whānau of new children enrolling, to ensure their pepeha is shared and their portrait taken. Future students enrolled can choose to wear the cultural costume of their choice for their portraits.

“This will remain in their ‘Learning Journal’ as they move through the school – it will grow and flourish just like them,” says Richard.

Wairoa Primary is willing to support any other schools within the Mata Nui o Kahungunu Kāhui Ako, and across the country should they consider producing a Tuakiritanga project.

Richard Lambert believes the effects of this project have been powerful, and extended well beyond the school gates.

“Whilst there were some challenges along the way, the overwhelming response was amazing, and the results speak for themselves. The images also inspired whānau, both tangata whenua and tauiwi, to consider their own rich heritage and the stories that sit alongside them,” says Richard.

“You imagine being there – it was amazing, just amazing.”

A video(external link) of the school’s contribution to the local film festival can be viewed. 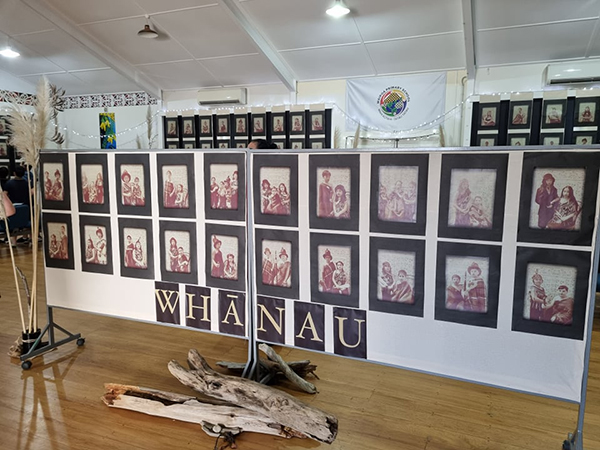 Portraits of siblings were captured together.