Te Puke’s Fairhaven School was acknowledged as a finalist at last year’s Prime Minister’s Education Excellence Awards in recognition of what it is achieving with Toitoi Manawa, where learning is promoted within a Māori context and whanaungatanga is encouraged. 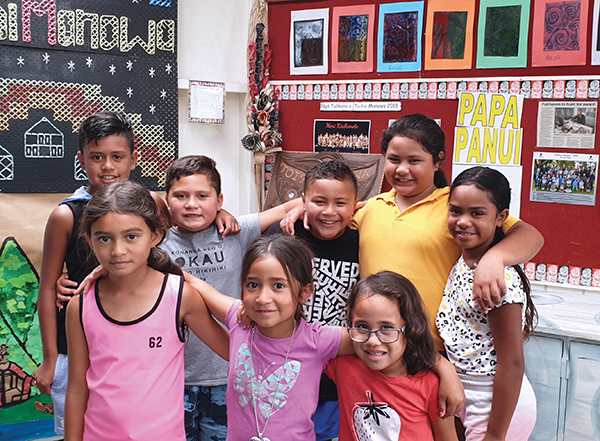 “We are like one big whānau,” say these tamariki in Toitoi Manawa.

On the wall at Fairhaven School is an eye-catching representation of a korowai, each feather intricately crafted out of silver foil by the students.

Principal Paul Hunt says the korowai provides an excellent symbol of the vision for Toitoi Manawa.

“When you look at it, all the feathers are on show, each one is important. Individually they are different but collectively they are spectacular. That’s the analogy that I think suits our school, but in particular Toitoi Manawa because we’ve taken a collective path.”

It’s a path that led them all the way to Wellington for last year’s Prime Minister’s Education Excellence Awards in recognition of what Fairhaven is achieving with Toitoi Manawa. The Bay of Plenty school was named a finalist in two categories: Excellence in Leading and Excellence in Health & Wellbeing.

“It was a real thrill,” says Paul, of the accolade. “It was nice validation that the hard work has been recognised.”

Hard work is putting it mildly. Toitoi Manawa is the result of years of in-depth consultation with whānau, kaumātua, the school’s two local Iwi, Waitaha and Tapuika, and lots of research.

“I can’t emphasise enough how important all those parts are,” says Paul. “It’s easy to imagine a process where a school says, ‘we need an immersion unit; you do this, you do that. Tick! Kaumātua, is that OK? Tick!’ But it wasn’t like that at all.”

Toitoi Manawa’s roots stem from the community’s passion for te reo Māori and tikanga Māori. An Education Review Office (ERO) report identified this and in response, Fairhaven set up a bilingual class for Year 2 and 3 students in 2014.

‘Toitoi Manawa’ is the name given by kaumātua, meaning to inspire or awaken the spirit. Following much consultation and research, this gradually evolved and in 2015 they shifted from The New Zealand Curriculum to Te Marautanga o Aotearoa in the process.

“We didn’t rush into it. I think that has held us in good stead for the following years,” says Toitoi Manawa leader Tatai Taikura-Mita.

Bringing staff along on the journey

Paul says they were conscious they didn’t want Toitoi Manawa to sit in isolation from the rest of the school, so they engaged in some extensive professional learning and development involving all teachers, support staff and board members in the process.

“That has been a huge catalyst for getting people to look at themselves, their practice, their values – and there’s been a big shift within our staff along that continuum, which needs to happen when you’re in a school that has been set up primarily in a Pākehā style.

“This challenged us – myself included – to look at what we really wanted for our school and how we could be looking at our Māori students and other students to ensure that our preconceived ideas, our unconscious biases weren’t getting in the way of how we did things. It’s been very powerful.”

Parent and Board of Trustees member Raponi Wilson values the fact that Toitoi Manawa sits within a mainstream primary school.

“The thing I like the most is that Toitoi Manawa is a Māori unit where the tamariki can be Māori but also be a part of the larger mainstream school – this better emulates Māori being part of a community. I think that is an important part of what makes Toitoi Manawa.”

Tatai’s goal is to strengthen the pathways in and out of Toitoi Manawa.

As an across-school leader in their Kāhui Ako, Tatai is well placed to work with the other schools on areas of cultural relationships, responsive practice and transitions.

“I really believe our community should be catering for our kids. That’s something I’m really passionate about.”

Tatai points to feedback from a recent ERO review as affirmation.

“They said, ‘You’ve got the right balance. You need to bottle what you’re doing here and share it around – not just across the nation, but globally’.

“So we’re starting in Te Puke and we’re sharing with other schools some of the things that we know work for Māori learners.”

Those things extend beyond just teaching and learning te reo.

“We are trying to create a holistic education that isn’t just focused on the academic, because the kids we’re trying to nurture need the whole package,” says Tatai. 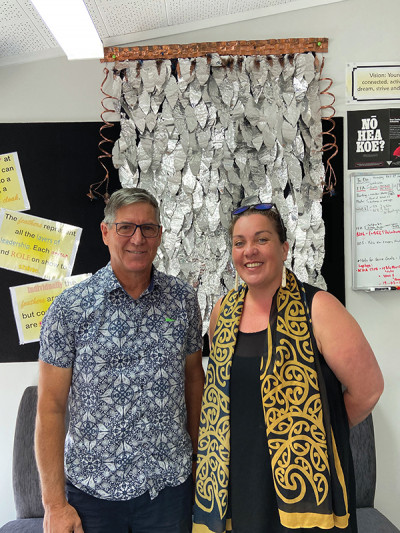 There are a lot of financial and societal pressures placed on their whānau – pressures they try to minimise at school with initiatives like breakfast club and the provision of lunches for those who need them.

And underlying everything are the relationships with whānau and community. In Toitoi Manawa, whanaungatanga is encouraged; tamariki (and their whānau) are inspired to succeed and be confident in who they are and where they come from; and learning is promoted within a Māori context.

“I think that many whānau for generations have felt very uncomfortable coming to school; for them school is not a place they have a positive connection. We’ve got a personal connection with our whānau,” says Tatai.

“They feel welcome, important and they’re a part of their children’s learning. They know it’s an open door and we have parents in and out all the time.”

“Toitoi Manawa gives whānau the opportunity to participate practically – sharing our ideas and skills, which builds mana, both individually and collectively, and a sense of worth and value,” she says.

Tatai says some kaumātua have worried about the future: “Who is going to take their place at the marae? Who will karanga and whaikōrero? When we take our Toitoi Manawa tamariki to the marae, the kaumātua can see the fruit of what they are learning in front of them, because they have helped us teach them that.”

“It’s a bigger thing than just teaching te reo Māori at Fairhaven,” reflects Paul. “It’s creating intergenerational change of lives and appreciation of education. We can see the change within Fairhaven and within the whānau at Fairhaven, and across Te Kāhui Ako o Te Puke.

“In years to come, I think we’ll be able to look back and say there’s been a change in our community and that we played a part in that.”

This year’s Prime Minister’s Education Excellence Awards are now open for entry to all schools, kura and early learning services.

If your team is doing great things for learners, their whānau and your community, it’s time to share your achievements so others can follow in your footsteps.

Te Rākau Theatre Marae is currently working with the Ōtaki community and Ōtaki College to reinvigorate teachings on Māori history, bringing the past into the fu

Te Rākau Theatre Marae is currently working with the Ōtaki community and Ōtaki College to reinvigorate teachings on Māori history, bringing the past into the fu Read more

Play in the Junior Classroom

Learn Korean online for free in 2023