Faced with challenging behaviours and a dramatic dip in attendance levels after Covid-19, Tāneatua School turned to its community to try something a bit different. 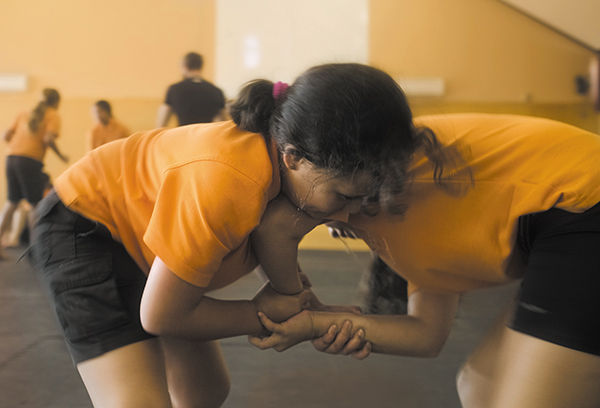 Tāneatua is a small community 11km south of Whakatāne “in the foothills of Te Urewera and home of Ngai Tūhoe”, describes Mārama Stewart, principal of Tāneatua School.

Mārama, whose whakapapa is rooted to this area, is open about the challenges faced by the community. She says unemployment has been high since the railways closed a few decades ago, and many families live with material hardship. Housing is problematic. Gangs, while respectful of the school boundaries, have a significant presence in the community.

Mārama came on board as principal in April 2019 and immediately noticed that some of the issues from home were spilling over into school life.

“There was a negative cycle where kids were having a bad day and it would just spill over. We were having to manage a lot of poor behaviours. There was a lot of fighting.”

In 2019, the school made 19 unique stand-downs (unique means some of those 19 children were stood down more than once), four suspensions and three exclusions.

Mārama and her staff worked hard to turn things around. The staff engaged in significant professional learning and development around relationships, Te Whare Tapa Whā, wellbeing, and play-based learning. They implemented a new behaviour management system – Te Ara Piki – that Mārama describes as “a pathway to lift the mana of our tamariki”.

“We worked really hard on celebrating successes and helping the kids understand when they were feeling crunchy and needed support and what they could do.”

And just as things started to improve, Covid-19 hit.

Coming back from Covid

Mārama says the community was amazing during the Covid period. People rallied to ensure there was enough food for everyone.

But getting the tamariki back to school once lockdown ended proved to be difficult. In the post-Covid months, the school’s attendance statistics hovered around 40 per cent and never reached above 60 per cent.

In addition to reinvigorating the learning programmes that were starting to have a positive effect pre-Covid, Mārama says the school’s Brazilian jiu jitsu programme was a major factor in boosting attendance.

“The real kicker in the attendance was when we started our Brazilian jiu jitsu programme. That brought the kids back!” 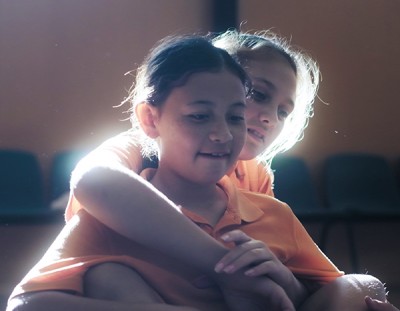 Mārama’s husband had joined the Mixed Martial Arts gym in Whakatāne and as well as noticing a boost to his own confidence and wellbeing, he was impressed with the gym’s junior programmes. He suggested to Mārama that Brazilian jiu jitsu might be effective at Tāneatua School.

Mārama agreed, anticipating that jiu jitsu might be a good way to get students to have fun, build fitness, learn self-control, and importantly, attend school on a regular basis.

“As at any school, our kids like to play fight. I know play fighting is a really important play schema, but there was no self-control. If the play went awry, it would tip out of control quickly and it would turn into a real fight. So I thought, wouldn’t it be cool if they could playfight, have that control, get rid of that energy and carry on,” says Mārama.

Things fell quickly into place from there. The school’s application for funding from the Urgent Response Fund to support the programme was successful and they were up and running very quickly.

“I took it on as a challenge,” says Jerry Stensness, the head jiu jitsu instructor who leads the programme at Tāneatua School.

“I knew it wasn’t just going to be teaching them a standard self-defence class. It had to be more, integrating discipline and responsibility; something as simple as giving them a uniform and telling them, ‘This is your uniform now, you have to look after it – it’s yours now’.”

Jerry says he could immediately identify children who might need a little more guidance.

“My goal was to turn those kids into leaders. Rather than kicking them out of the classroom, why don’t I make them ref a game, give them a little bit of responsibility and see how they take it? And from there, we started to see progress.” 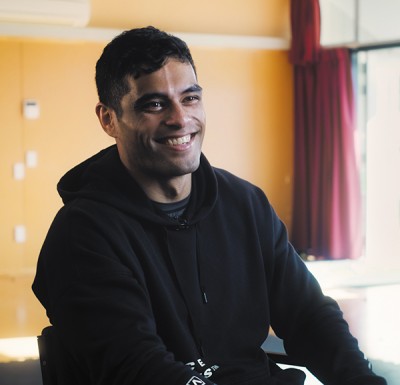 Jiu jitsu coach Jerry Stensness says the programme is helping get children and their families engaged in learning and school life.

Jerry aims to create a dojo-like feeling at the sessions, to mirror what happens in any dojo in the world.

“So no shoes on the mat, short fingernails, uniforms are correct, hair tied up, all those little things.”

The sessions start with a warm-up to help build fitness levels, then a drilling component of one or two techniques, then a few games, before they finish with a bow and a handshake.

“Practising these respectful values found in a martial arts dojo as a collective, prevents that group of 30 or 40 kids from feeling shy and intimidated. When you see the whole group collectively doing it, taking their shoes off, bowing, respecting each other, it enables them all to form as one,” says Jerry.

The tamariki love it.

“My favourite thing to do in here is play toe-tag when you just have to touch the other person’s toe,” says Year 6 student Jolee, “I think jiu jitsu does help other kids concentrate in class and stuff,” she adds.

Mārama agrees that the programme has helped children engage more with their learning.

“Some adults need to go to the gym. They have a good blow-out and they’re ready to go and work for the day. Kids need that as well. So the children have their blow-out, they’re tired, they’re ready to focus and use their brains and it’s really good. Fitness and wellbeing has become a focus in our school first thing in the morning and everyone’s happy just to get on with it.”

Mārama is passionate about play-based learning and says the jiu jitsu programme aligns with the school’s approach.

“We want our play to be purposeful and built around the play schemas. We make sure we provide experiences, whether it’s tied to science, or building or construction.” 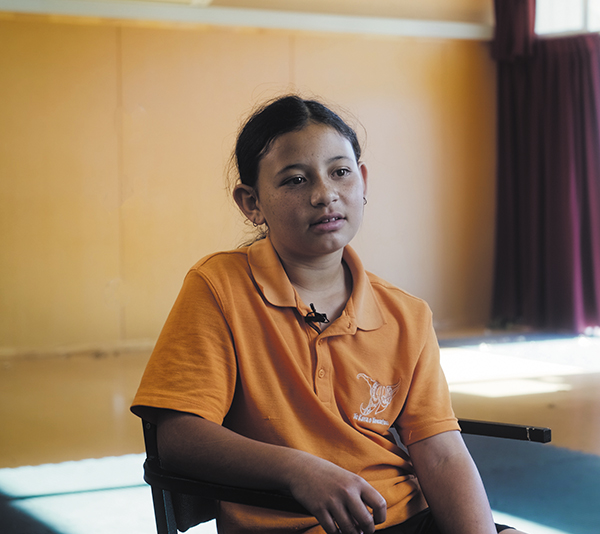 Jolee talks to the Education Gazette film crew about the jiu jitsu programme that's making a difference at her school.

As well as an overall improvement in behaviour, and more engagement with their learning, the programme has dramatically helped improve attendance levels.

In term 4 2020, the jiu jitsu programme was held twice a week and the children earned their spot on the mat by being present at school the day before.

“Now, I think we wouldn’t have more than 18 kids away at any one time, even though we’ve dropped back to only Tuesday mornings. At the very most, we have about a 10 per cent absenteeism rate, the majority of which is justified or explained.

“I get lots of big thank yous from parents who love seeing their kids fit, healthy, and active and just happy and excited to go to school. Our parents are happy if their kids are happy.” 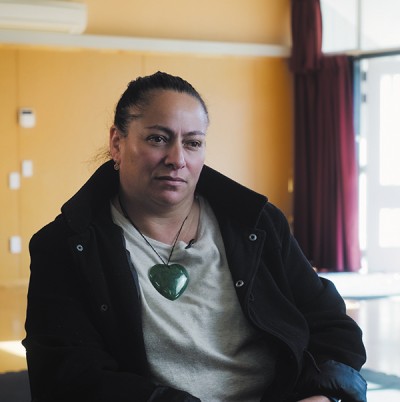 Parent and Board of Trustees member Gina Williams says the school does a lot to support families in their community.

One of those parents is Gina Williams, who is also on the school’s board.

“We’re not a rich community. Our parents aren’t that well off and can’t provide this stuff well. And having it in your school, in your backyard, that’s huge.

“It’s touching to know that our kids can come to school, they get breakfast – they’re spoilt as! – they get lunches and they also get a place where they can do this [jiu jitsu]. It’s pretty cool and it’s no cost to the parents. The burden of [cost] is huge.”

Jerry is impressed with the progress he’s seen in the children’s skills and attitudes. “Whether it works in other communities, I’m not too sure, we have to try that out. But out here, the respect for the art and each other has become a normal part of how we ‘roll’.”

“He can see a real future now” 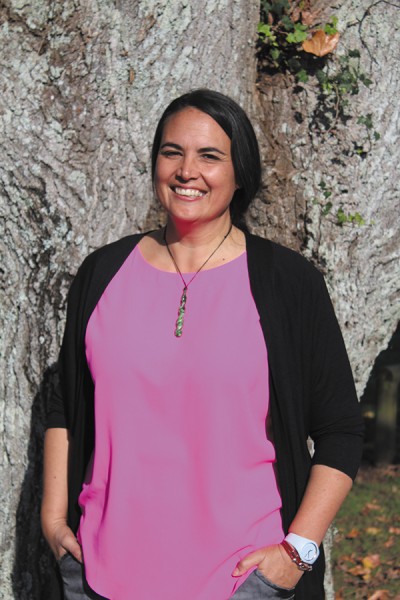 Principal Mārama Stewart shares how the jiu jitsu programme has had a profound and positive impact on the life of a student at Tāneatua School.

“One of our superstars, he’s always been a delight, but he was never at school,” says Mārama. “He was never engaged. He never saw the purpose of coming to school. And since he’s started this jiu jitsu programme, he’s here every day and he knows what it is to work. He wants to work hard. He’s got goals.

“Jerry gave him a scholarship to join the club. He needed a uniform, so he worked for it, he did a car wash and bought himself his gi [uniform]. He’s really into it, and he’s doing really well at school now as well.

“He could have easily been influenced to go down the wrong path. There is no safety net around here. So his whānau try to do the best for him but it’s hard with the long hours they work, and if he's wagging school, the wrong people are always just around the corner waiting, ready to invite them into that life. Drugs are easily available if you know where to look. It's very easy to fall and with no safety net there is no one to catch you other than the darker side of life.

“But now he’s built this massive amount of resilience and he’s met some pretty awesome guys who would never, ever have considered that kind of life. And he can see more now. He can see a good future.”

Swimming lessons, farm visits and a programme that sees Kiwi students mentoring former refugees are all helping students from other countries

A five-day environmental education programme gives teachers the knowledge, contacts and inspiration to lead kaitiakitanga in their schools and kura.

Swimming lessons, farm visits and a programme that sees Kiwi students mentoring former refugees are all helping students from other countries Read more

A five-day environmental education programme gives teachers the knowledge, contacts and inspiration to lead kaitiakitanga in their schools and kura.   Read more