How important are the first 1,000 days of life for pēpi? 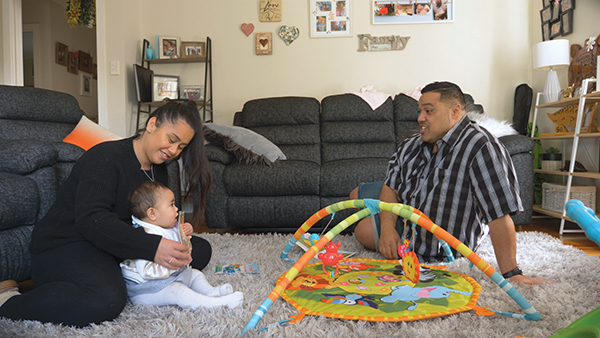 Talking Matters to Tāmaki, a nationwide community programme created by COMET Auckland, draws on the knowledge of tipuna to support parents to recognise the importance of communication, particularly in the first three years of life.

The first 1,000 days of a baby’s life are when a tremendous number of the brain connections are developing and when the foundations for language are laid.

“Children are born being able to communicate and have been listening to language in utero,” says Emma Quigan (Kāi Tahu, Pākeha), community activation lead with COMET Auckland.

“That’s something indigenous populations like Māori have known for a long, long time. We link the two knowledge streams: western and Māori science, and spread the word that the first 1,000 days set pēpi up for life,” she says.

Talking Matters to Tāmaki has taken off under the coordination of the Glen Innes Family Centre.

After COMET Auckland held a community hui at Ruapotaka Marae in 2017, the Family Centre talked to whānau and found while they knew talking to pēpi was important, they were unaware of the importance of communication and there was a lack of role models, or a mechanism to foster whanaungatanga.

Coordinator and social worker Samantha Makoare (Kuki Airani, Ngāti Whātua), reports that 52 whānau have come through the programme and likens it to a whānau movement with people being encouraged to take part through family connections.

How does it work?

Tynesha Pomare and her partner Joshua Taia recently completed the programme after the birth of their first child Whitney-Kai Taia. At just two months old, Whitney-Kai was quiet in her communication and interactions. Tynesha now says their 10-month-old daughter uses eye contact, body language and is really talkative.

“She loves to sing. She loves to dance. She loves to be around people that she knows. There have been a lot of changes since the programme and it’s been a really good journey,” she says.

Jordan explains that he has learnt about how interacting with pēpi is very good for them and their growth.

“Not only that, it’s also good for myself, as a father, to understand how to interact with my baby,” he says.

During the programme, these first-time parents were visited by their coach each week. They also met with other parents at whānau hui. One day a week, a LENA (language environment analysis) device is worn by pēpi and counts all of the words the baby is exposed to during the day.

The data is presented in graphs and coaches and parents talk through the results to understand which parts of the day are language-rich and which are quiet. The coach advises parents on how to integrate more communication into their day and meet the goals they have set.

An unexpected result has been employment opportunities for whānau.

His personal journey has seen him move from being a participant to a coach and he now fills a leadership role for coaches with COMET Auckland. As a community activator, Tampy works across Aotearoa with whānau, early childhood centres, schools, iwi and hapū.

“I’m there to give them some insight into the potential they could reach and access with their children through rich oral language and sharing their culture with pēpi.

“Everyone who engages with baby, whether they be caregivers, grandparents, siblings, needs to know the power of investing time talking to baby and how that helps baby to thrive and grow to be a great thinker and reader,” says Tampy. 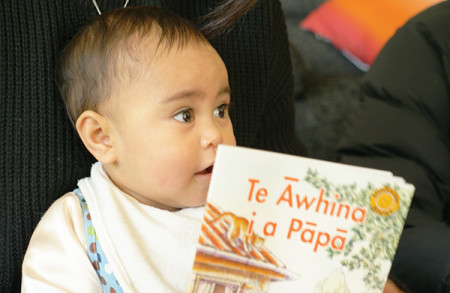 Whitney-Kai: by the age of three a child’s brain is 80 per cent developed.

The first 1,000 days are the golden window of opportunity because by the age of three, a child’s brain is 80 per cent developed, explains Tampy. One of the techniques he encourages is conversational turns, known as ‘serve and return’.

“What this means is don’t do all the talking, because the child needs to respond. Even though not all babies can talk, they will use coos, facials or hand movements to communicate”.

Tampy’s son Hawaiki, now two years old, has been the catalyst for the revitalisation of three languages within their whare: Māori, Samoan and English. His wife and whānau members are all part of this tri-lingual language environment.

From her experience in speech language therapy and the Talking Matters campaign, Emma Quigan agrees that personal development for the child and other members of the whānau is key to the success of the programme.

The Talking Matters campaign is shifting its focus to the development of the whānau as a whole, and on their whānau-to-whānau coaching model.

“We’ve learnt that one child can influence their whole whānau to reclaim their language,” says Emma.

Learning to stand strong in the community

Punahau Early Childhood Care Centre delivers a local curriculum enriched by te ao Māori and te taiao, and from relationships with the community.

Learning to stand strong in the community