Pacific principles of relationship-building and two-way dialogue helped an Auckland school support staff, students and families during the Covid-19 disruptions and closures. 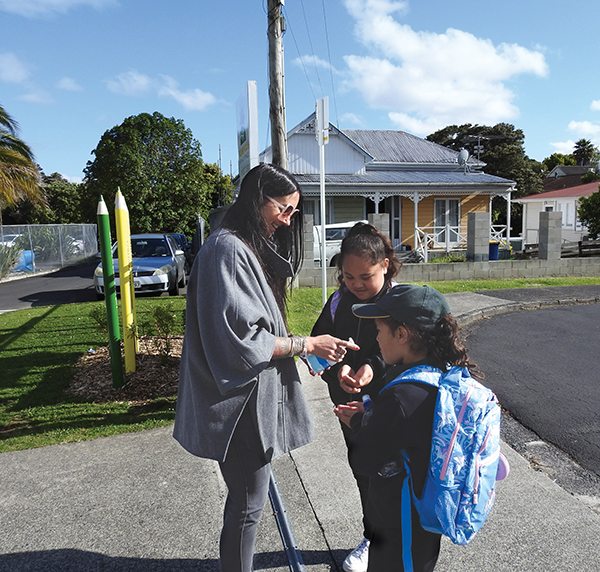 Katie Pennicott at the school gate with Ariana and Laela.

Sunnyvale School worked effectively with its school community during school closures under the leadership of principal Katie Pennicott (Ngāti Porou), who was appointed nine months before the Covid-19 lockdown.

Katie’s thesis for her recently completed Master of Education is about decolonising professional learning spaces and using existing systems and structures underpinned by cultural shifts to transform a school. Work to address this had begun before Covid-19 nationwide school closures.

She explains that Brazilian theorist Paulo Freire writes about the pedagogy of the oppressed. The cultural beliefs and values of the oppressed culture, or the culture that is receiving the inequality, are embodied to drive cultural shift to bring about equity.

“I use Māori concepts and principles in my work because that is how we drive cultural shifts. That way you bring that true sense of success and shift, because if we operate in the Euro-centric structures that we currently have in our system, we’re just going to perpetuate the same outcomes over and over. It’s about stepping away from those.

“Our drive was whanaungatanga, connection: making sure that connection we had with our students and families was maintained every day and was reciprocal. So it wasn’t just the teacher saying, ‘Here’s some work, do it’. It was creating spaces where the children could do something with their family and upload it and where we would do something and the families could respond,” explains Katie.

Considering the vā (relational space) of staff, students and the community, Katie created a health and safety plan for the school. This plan included managing the health and safety of staff and students, and fulfilling the Ministry of Education’s requirements.

“We only had two days before the lockdown so I had to be very directed about what I was doing. But over that process there was learning and growing around how these things that I was describing as Māori principles connected to the values of my Pacific people here and how we could embody that further.

“In the first instance, I was focusing on whanaungatanga because that is our core school value and so everything that I was doing was grounded in that value. However, during that time, the concepts of the four aspects of talanoa (see box) were coming through in what we were doing. I’m not Samoan but those things were becoming apparent – the people here who are Samoan put those words on it.

“When we went into Alert Level 4 the first time, the first thing we did was to make sure that every person was acknowledged and communicated with in the ways that best suited them: whether a phone call, a Facebook message, a text, an email or a home visit,” says Katie.

She explains it was very stressful for people, so the focus was on being open, responsive, helpful and using clear communication. Sunnyvale School used online tools and distance methods to have talanoa with staff and families during the lockdown period.

“It was important to be consistent as one family might have five children across different classes, so it was important they are not trying to find several different ways to access the teacher and their learning,” says Katie.

Staff were given professional guidance in being responsive to the learning needs of the students and how important the contact with students would be over this time.

“Talanoa and community are key elements to Pacific nations people and to be isolated could be a foreign concept, causing anxiety. Working in isolation from others could have led to disadvantaging the learning progress of students,” says Katie.

Parents contacted Katie regarding a number of technical issues, and she ensured that every query was followed up. This was important as it built strong communication lines with whānau and also gave teachers space to process and put into action their learning of online teaching, instead of attending to technical difficulties.

“We gave out every device in the school because we wanted people to have what they needed for that open communication. We also created our own supporting resources paper for the children if families requested it or we thought it would be helpful. I was on the phone just about 24/7 for that first week coaching people through it, as well as for other reasons,” she says.

Reciprocity grew as some staff members looked for ways to show whanaungatanga. Staff took on responsibilities that were beyond their job expectations, including sourcing resources that students needed. 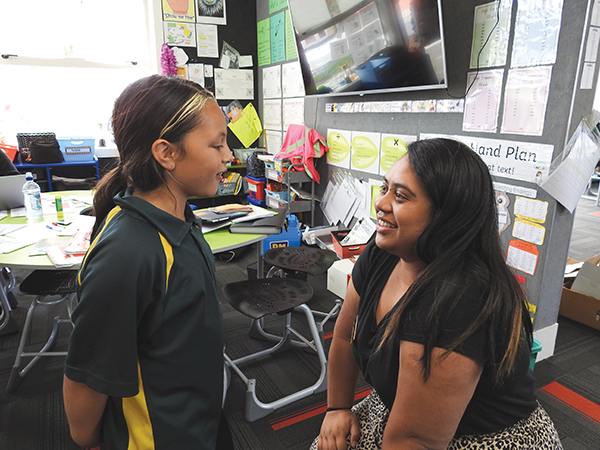 Team leader and teacher May Gaseata with Cole.

The principal maintained ofa, māfana, maīle and faka’apa’apa (see box) in her interactions with staff, which enabled genuine talanoa to take place.

At the beginning of the first lockdown, a timetable was developed to schedule a meeting with every staff member. With whanaungatanga as the basis of these meetings, there was a ‘no-agenda’ aspect and staff members were able to highlight their own criteria for discussion about their practice.

They were also given an opportunity to discuss their own experience of moving into lockdown and any concerns or anxiety they had in providing education online.

Staff members reported that they felt fully supported by the principal as they supported students and whānau. Staff also commented on the coherence that was evident throughout the school environment and that this would make the transition back to classroom teaching smoother.

Staff with Pacific heritage were asked for feedback after the lockdown alert levels were lifted:

“This principal develops the wellbeing of staff, students and whānau through effective communication, high expectations, providing challenge, celebrating progress, effectively resourcing and giving time for people to internally process discussions and put any learning into action. She does this in a way that shows the elements of ofa, maīle, māfana and faka’apa’apa.”

“As a first-year team leader, this was all new to me in terms of leadership and then having this epidemic hit. I had to learn how to guide my team through online learning, appraisals and team inquiries, whilst still leading them through PD. She supported me through all of this. She taught me how to awhi my team members through new learning whilst still respecting my mana. The vā between her and I was one of mutual respect, I never once felt as though she treated me like a first-year team leader. She believed in my ability to lead and respected the decisions that I made during lockdown.”

The strategies used during the first lockdown were so effective that by the second lockdown, the whole school community knew what to expect.

“They came and got the devices and were straight into it the next day. In the second lockdown we also measured engagement weekly. I designed a tool for measuring that because our school leadership inquiry is around engagement. We saw the increase and regularity in engagement from the families,” says Katie.

“Ever since both Level 3 lockdowns, I have been at the school gate every day for about two hours greeting, farewelling and talking with people. I used to do that from time to time but I felt that was really important that I was there to answer questions and just be there for people. I have just continued doing that because those relationships have been really strengthened through those conversations.”

Feedback and subsequent actions from school whānau and Pacific staff members show that Pacific people in the school community felt empowered as different aspects of vā were woven together to bring about mauri ora (life force) as an outcome for the school community.

The leadership practice demonstrates that Raranga Mauri Ora can be practised effectively within education, using principles that are effective for Pacific nations people and Māori.

New way of being

Prior to Covid, whānau hui were held at Sunnyvale School with teachers conducting deliberate talanoa whanaungatanga dialogues with the families of all of the 475 children at the school.

“During lockdown I analysed those responses using grounded theory and thematic analysis. Out of that came our whole new way of being as a school: the underpinnings of our whole school local curriculum came through,” says Katie.

The key elements are:

“I was able to use our talanoa and whanaungatanga relationships to clearly communicate what they mean to our community and how we could apply that. Our whole strategic plan is now based on those four elements: our initiatives, curriculum, school reports, school vision are aligned with one of those four things,” says Katie.

“The children use it too, so when they are going to do some learning, first they make their connections to what they already know, then they do some learning, then they create something and then they share it. It’s been a very powerful year for us. There’s real clarity and cohesion across the school about what we are doing.” 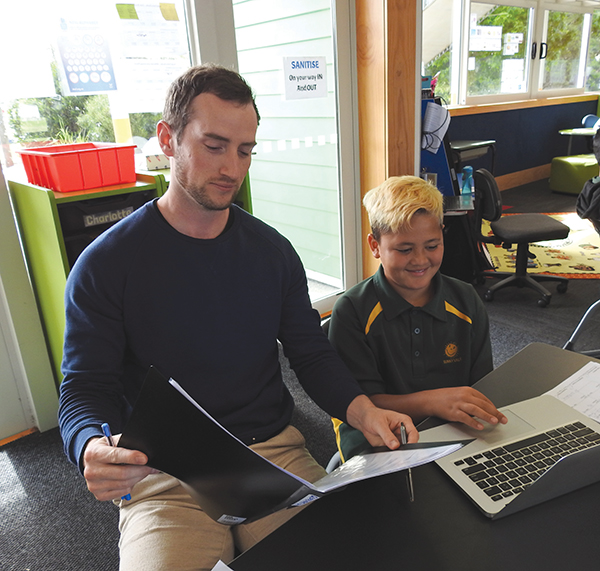 Talanoa: conversation/discussion which includes participants discussing stories, metaphors and experiences to reveal the loto (heart and soul), of the communicator. It’s an effective nonlinear approach for Pacific and Māori, largely focused on face to face interactions, which relies on mutual respect where shared understandings are developed. Talanoa is developed through the four elements (in Tongan) of ‘ofa (love), māfana (warmth), māile (humour) and faka’apa’apa (respect).

Vā: relational space which describes the connections between people and how they are strengthened.

Whanaungatanga at the heart of lockdown life

Supporting the wellbeing of Pasifika communities

RSE programme Te Ira Tangata is designed for kura, whānau and kaiako to be able to adapt to the needs of their kura community.

Whanaungatanga at the heart of lockdown life

Supporting the wellbeing of Pasifika communities

RSE programme Te Ira Tangata is designed for kura, whānau and kaiako to be able to adapt to the needs of their kura community. Read more