An internal model of Ka Ora, Ka Ako | Healthy School Lunches at Porirua College is providing ākonga and three other local schools with a thousand healthy lunches per day – but the benefits go beyond a full belly. Education Gazette  visited the college to see the model in action. 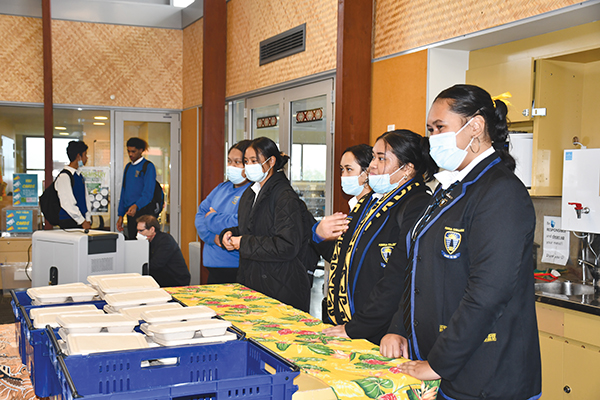 Porirua College has been participating in Ka Ora, Ka Ako | Healthy School Lunches programme for two years. Before making the decision to run their own programme, the school had an external supplier providing food.

Despite the nutritious kai, principal Ragne Maxwell says ākonga continued to leave school grounds during the day to buy food. Wanting to keep them on site and safe, the school realised they needed a different approach, and one that would also benefit some of the local schools. So, the school employed their own kitchen team and made some changes to not just the food, but how and when it was eaten.

“We were already providing a service for a number of local schools, whose students and teachers could order food from us in the morning and get that delivered. That was part of the model we had. They all immediately said ‘we’d like you to do our lunches as well’,” says Ragne.

Consultations were held with students about the kind of food they would like, and then different menus were trialled.

Ragne says the internal model has provided an opportunity to cook healthier meals and educate ākonga about nutrition, but concedes that integrating this was a more difficult aspect.

“If it’s super healthy, but they [the students] don’t want to eat it, they are going to be off site again.”

Creating a formal meal situation was also an important consideration and the school decided to encourage a traditional form of eating, where people sit around a table together rather than getting their food and leaving.

“We felt this is supposed to be a learning environment. We wanted them to learn about healthy eating and to learn about appropriate behaviour and social situations,” explains Ragne.

“Tikanga and the cultural expectations around eating were part of what we needed to address, along with the issue of healthy eating.”

Junior students trialled the programme before it was extended to the whole school.

“We invited seniors to take a lead role with doing karakia with the juniors to attain the learning.”

The school invited seniors to be lunch leaders, working alongside the prefects. Students who volunteer to be part of Ka Ora, Ka Ako receive a school blazer. Older students assume a tuakana role for their tēina, giving back to the community and taking pride in what they do.

“Our mission statement is to grow young people who can use their voices, actions and identities to make a difference in their communities – that is at the heart of who we are.

“Being a grown up is about feeding people and looking after them and giving back and caring,” says Ragne.

The programme even helped to improve attendance. After noticing students streaming into school for lunch at 12.45pm each day, the school decided to re-arrange their timetable.

Ragne says they heard of success from some schools that had changed lunch times, and that feeding students earlier improved learning. 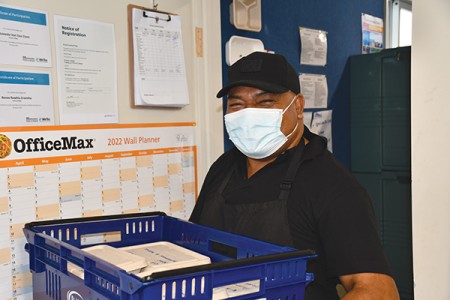 The school moved to an 11.20am lunch time and changed their whole timetable. Students have period one and two, then ‘lunch-eating’ which is a defined 15-minute period, and then a 25-minute break.

“We found we are much less likely to have incidents around on the playground during break times … because they are well fed, and they are happy.

“You cannot learn if you have not been fed, your brain does not operate properly. Teachers have noticed students are more engaged – they are learning better!”

Ragne says students are enthusiastic about the kai and they even talk about it at home.

“We had one student enrol this year who hadn’t attended school for the last two years but started in our Year 9. Every day he went home raving about the lunches and his older sister decided to also return to school, signing up with us. It was a family that came into our community and the first point of engagement was the school lunch.”

At the time of our visit just before midday, Jason told Education Gazette  that lunches prepared that morning had just been delivered to other schools in time for lunch. “The development of the food is ongoing all the time,” he says. 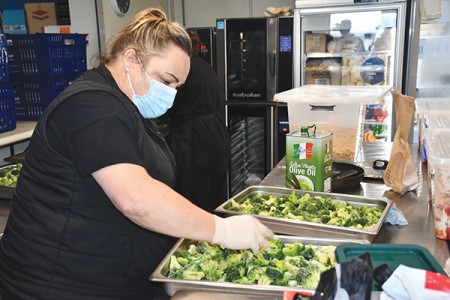 When the school decided to move to an internal model, their little canteen-like facility was transformed into a fully functional kitchen with chillers, fridges, gas cooktops and ovens.

Ākonga have the opportunity to try international and unusual food and expand their diet. Jason says most of the students were used to sliced bread only and they were surprised and suspicious about having fresh sourdough bread – “but then they started liking it!”

Jason says the Government’s nutritional guidelines helped with improving the quality of the food, and students enjoy eating more fruit and vegetables.

The kai is prepared every morning on site and delivered to the separate houses at lunch time. Before getting their fresh meals, senior students will sing a waiata or say karakia.

Pastoral leader of Whitireia House, Povalu Kelemete says it is nice to have a common area where students and staff can share their meals.

“When we first started, especially with our house, we made a rule that we all sit down together and eat. The staff bring their lunches out and we sit down and break bread with the students,” she says.

Ngā ākonga gather in a central place and share their kai together. After consuming their kai, the compostable containers and leftovers are put into a separate compost bin.

“We didn’t want to have an impact on the environment. We went out right from the start to work out a good way of not having lots of plastics,” says Jason.

Knowing numbers in advance and producing the meals in-house helps to reduce wastage and work out exactly what is needed.

If there are spare lunches, students can help themselves to a second lunch in the afternoon break, or they can take the leftovers home.

To find out more about Ka Ora, Ka Ako(external link) 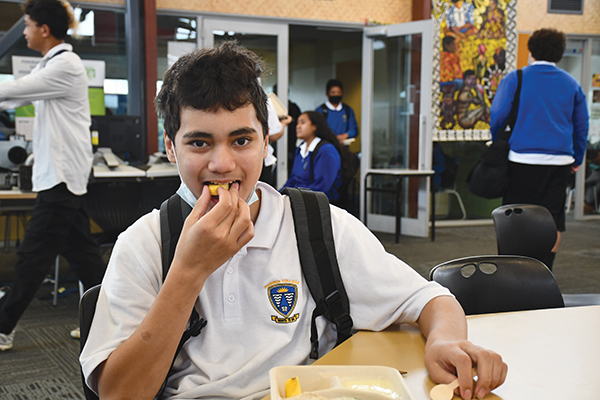 A new outdoor education resource and the period products in schools initiative are supporting more inclusive practices to ensure all students feel safe...

RSE programme Te Ira Tangata is designed for kura, whānau and kaiako to be able to adapt to the needs of their kura community.

RSE programme Te Ira Tangata is designed for kura, whānau and kaiako to be able to adapt to the needs of their kura community. Read more