The earthquakes destroyed lives and damaged schools on an unprecedented scale in Canterbury a decade ago. Now, the revitalisation of Christchurch schools is playing an important role in promoting the urban renewal because the schools are the heart of their communities. 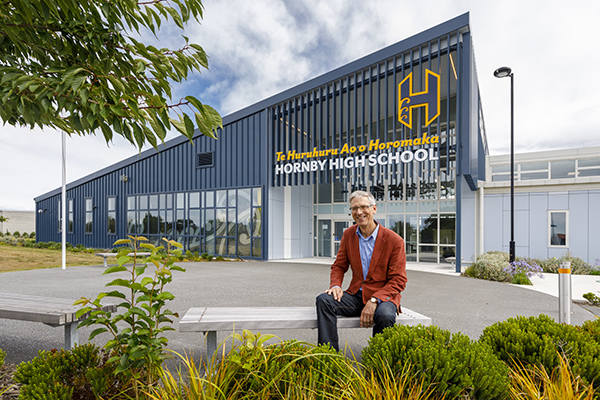 The rebuild has led to a rethink and refocus on how architecture assists learning and how to include extensive community consultation.

It’s radically different from the era when the schools were first built, many in 1950s and 1960s New Zealand, when standardisation was the common denominator and staff, students and the community had no role in determining what their school looked like.

Linwood College Principal Dick Edmundson points to Sir Ken Robinson’s TED Talk Changing Education Paradigms(external link) as a key influence for many Canterbury schools. He talks of a consensus understanding of the inequities in education and a commitment among principals and boards to socially rebuild, alongside the physical rebuild.

“Previously, everyone had to fit the mould in a standardised environment. This of course clashes with living in a bicultural nation and multi-ethic community,” he says.

As schools first prepared their Education Brief (the document that sets the scene for what they want and highlights their unique culture), then worked through the design process, they encapsulated state-of-the-art theories, which considered the latest pedagogies and what that meant for building design. The brief included the views of staff, students and the broader local community.

Every possible architectural embodiment of a learning environment has been investigated, reviewed and tested against each school’s unique needs. Yet no two schools are the same and that’s the essence of building for what your specific needs are in the 2020s. 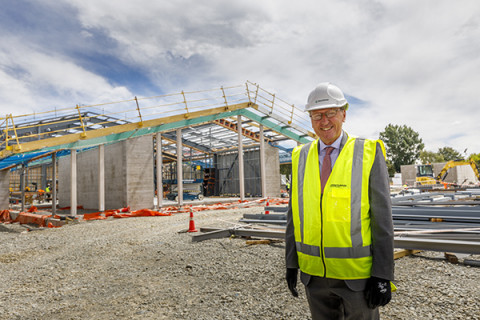 Linwood College’s principal Dick Edmundson is excited about the rebuild of his school, which will be renamed Te Aratai College.

Challenges with the Ministry of Education’s rebuild programme have been highlighted in the media as the regional rebuild has taken an extended length of time to accomplish for some schools. Yet, there’s lots of celebration for the communities where the rebuilt schools are operating and excited anticipation for those with building underway or planned.

Linwood College is presently temporarily sited on the former premises of Avonside Girls High School – a location where education has taken place since 1919. In 2022 Linwood’s rebuild at Aldwins Road will be complete and a new school will be unveiled – Te Aratai College.

“We want our community to be able to walk into our school and feel, ‘I belong here. I can see myself reflected here. I can see for my children and my grandchildren that they can be successful in their personalised pathways’, rather than having to leave their true identity at the school gate and to conform to a quite alien model,” says Dick.

Originally New Zealand secondary schools were designed for the privileged and powerful and worked as a filtering system through which the privileged few made it to Year 13 and were then prepared to go on to tertiary education, says Dick.

When he started at Hornby, the Year 7-13 high school was the epitome of 19th-century educational architecture – all single classrooms and the original 1975 ‘prefab’ relocatable buildings were still in place.

Now Hornby High School is on a vibrant new campus with a growing roll.

Robin says the new buildings are an enabler for education, whereas the previous ones created barriers. 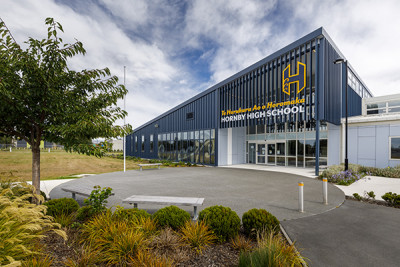 He’s no fan of architectural jargon – in fact he refuses to mention the words ‘modern learning environment’.

Today, Hornby High School has flexible, fit-for-purpose learning environments and teachers adapt the spaces to what is needed for the tasks the students are working on.

Concepts from library design theories for active learning spaces – private alone, private together, public alone, public together – assisted his team’s planning. In reality this means lots of options – both fixed-use areas and areas that allow teachers to choose from a range of different-sized spaces.

“The buildings are exciting, but what is more exciting is what is going on inside the buildings,” says Robin.

Like many schools today, his team are employing collaborative pedagogy and a connected curriculum. Everyone is changing and developing their teaching skills as the school evolves.

It’s challenging, but Robin is in no hurry as the evolution is continuous. In fact, the buildings were designed to last for 100 years. They are shells with no structural internal walls, so the building itself won’t stand in the way of future change. 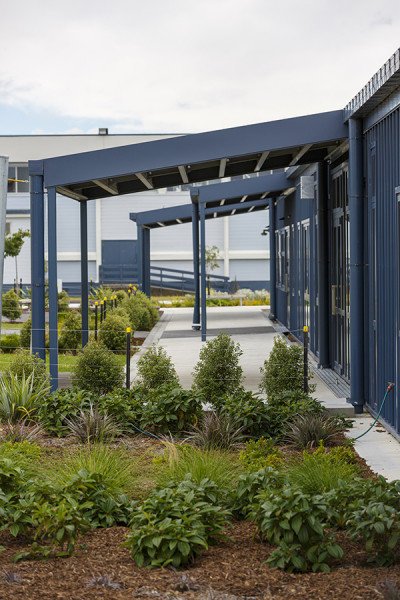 The former premises quickly faded into memory as everyone focuses on the ongoing opportunities of the new kura and the vision of confident and connected students with the adoption of the intentional and visible ‘learn, create, share’ pedagogy of the Manaiakalani programme.

Writing achievement is accelerating by twice the national average. NCEA results are improving.

The Year 7s and 8s who used to be defined physically and metaphorically as the junior school are assimilated into the whole ākonga.

And teachers are no longer pigeon-holed as junior or specialist teachers. Staff are buoyed by the fantastic impact the new school has on the students and have embraced the new spaces, setting aside any initial scepticism.

One part of Hornby’s evolution is what Robin describes as a focus on the first half of the national curriculum, the ‘soft’ skills, backed by timetabling changes for Years 7–10. There are few stand-alone subjects – English and Social Studies, Maths and Science, Health and PE are paired for collaborative learning.

“There’s a rapidly growing pride in the school. We are seeing that in enrolments increasing each year,” says Robin. 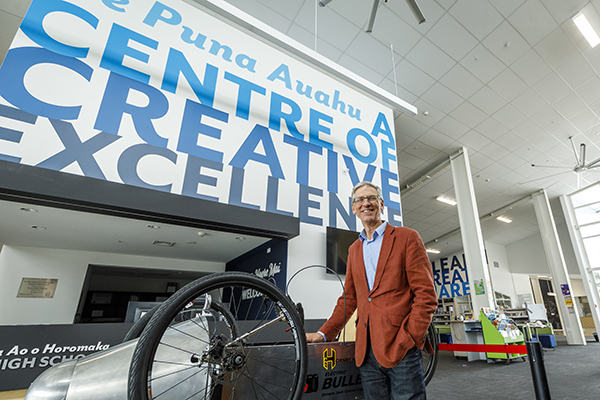 On the other side of Christchurch, the physical architecture at Te Aratai College will be a direct consequence of conversations with the community about what they wanted for their neighbourhood secondary school.

“We use responsive learning environment because the whole point of teaching is that we know our students and therefore we teach and engage in ways that are going to suit them best. Therefore, we want the architecture to support that as much as physical things can support it,” says Dick.

Te Aratai College’s local community is both economically and ethnically diverse, with a student roll comprising 30 percent Māori, 10 percent Pacific, 10 percent Filipino, 45 percent Pākehā-Palagi with the remaining five percent made up of other ethnicities.

Dick explains the school design is a combination of the best of both traditional and modern teaching spaces, with variety being the key. The base design has a standard-size classroom similar to what was in the original 1954 campus. The difference is in the detail.

The atmosphere is one of whanaungatanga. There are a number of interior and exterior spaces where students can sit and talk, with courtyards made inviting and protected from the chilling easterly breeze to create a sense of community.

Each classroom is paired with another and joined by sliding doors that provide the ability to enlarge the space. Outside the classrooms there are larger teaching spaces and smaller areas for individual learning.

The design recognises there are times when single-focused teaching, when the teacher is being the guide and using the benefit of their knowledge and experience to directly inform and assist students, potentially from the front of the classroom, is the right thing to do. But that doesn’t have to be the dominant model for the majority of the school day as has traditionally been the case for secondary education.

Responding to teacher and student needs

The design also recognises that there are times when individual students need a quiet space to focus on their studies or work in small groups.

“Our design is a combination of big and small and allows the staff to work out when to be bigger and more expansive and when to go smaller,” says Dick.

The new buildings physically help with responding to student/teacher needs and external factors. Learning at 10am can be very different from learning mid-afternoon on a hot Nor’Wester day in Christchurch.

Again, it’s not one size fits all and each school community determines what will work for them.

When the community consultation is authentic, it validates the design regardless of what any other school chooses for its architecture, explains Dick.

“What we decide to do may be different. But we need to be careful we get all the people around the table – we need to ensure everyone’s voice is heard in an equitable way, not just an equal way. Otherwise, the system will just replicate itself and we lose this opportunity for a moral and education transformation,” he says. 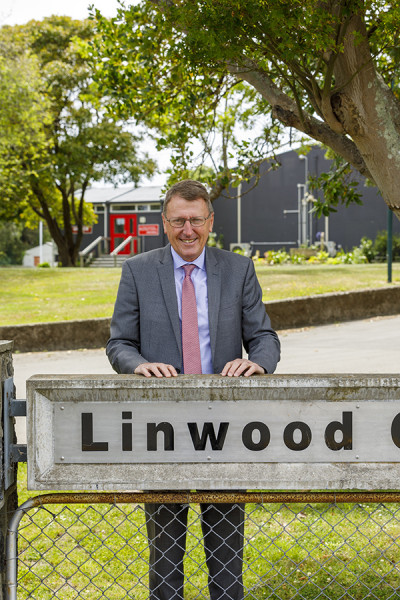 Linwood College’s Dick Edmundson wants every child to have fair opportunities at his school.

For Linwood College, the local community centres, led by the Mt Pleasant community centre coordinator Linda Rutland, used earthquake recovery funds to join together to finance extensive community engagement and consultation about what the communities wanted for the proposed rebuild of their secondary school.

A series of community outreach conversations was organised by specialist Sandra James in 2016 (Dick’s first year as principal) and 1,200 people contributed to the research.

The principles that flowed from that process were then tested by the students, staff and school whānau and fed into the Education Brief.

“Everybody was saying, ‘We want our local secondary school to be preparing our children for their future, not the future that we have experienced’,” says Dick.

When Te Aratai College opens, it will be a genuine and authentic symbol of the local community’s healing and salute to the future.

The new name was gifted to the school by Ngāi Tūāhuriri and means ‘pathway to the sea’ – a fitting identity for a school nestled under the Port Hills and encompassing the communities between inner-city Phillipstown, the beach of Sumner and the port of Lyttelton.

“It is certainly going to be a celebration of our local area,” Dick says.