A social enterprise that aims to reduce the digital divide in Aotearoa has already seen 100 refurbished laptops distributed in schools and the community, and has a goal this year to get 2000 laptops into the hands of those who need them. 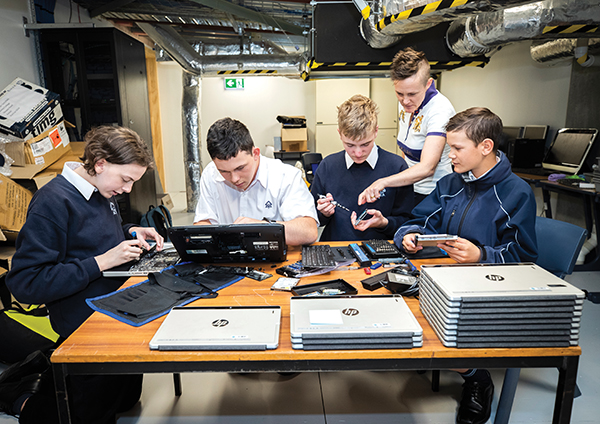 Recycle a Device (RAD) is a multi-stakeholder partnership born out of the first Covid-19 lockdown in 2020, when the difference in learning outcomes achieved by those who own a suitable digital device and those who don’t was crystal clear and alarming, says RAD project manager, Bronwyn Scott.

Around six years ago, a Year 9 leadership group at Aotea College noticed there was an equity problem. The Porirua school had just become BYOD (bring your own device) and it was clear there would be an issue, with some students having devices and some not, says Jennie Scott, teacher in charge of the BYOD Support Club.

In response, students began to refurbish laptops with the aim of providing devices for students who needed them. Two students in particular, Hadi Daoud and Owyn Aitken, were at the forefront of the initiative.

“Hadi had had similar ideas on his own and Hadi and Owyn took the lead from there. It was slow to start but in the last two years the growth of the project has been exponential. Covid accelerated the project into the final stages – which was to finally hand out devices to students. It provided the perfect opportunity for our group to fulfil its purpose,” says Jennie. 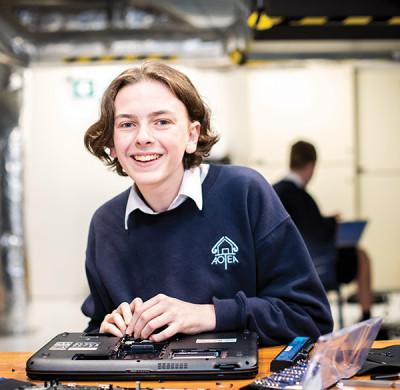 Ryan (co-leader) dismantles a donated device in the search for reusable parts.

While the goal was to refurbish donated devices and give them out to students, Jennie says there were a few speed bumps along the way.

One of the issues was securing funding to buy tools, batteries, and other bits of hardware. This was initially provided by two grants from the Aotea College Association. Now Spark and RAD are on board, this is no longer an issue. There was also initially some red tape around interacting with the community, but the arrival of Covid Alert Levels 3 and 4 saw this barrier removed.

“When Covid came, the leadership at the school opened more doors for us quite quickly and in the two days before we went into lockdown, we were able to give out 30 devices which had been donated by our school community and refurbished by our students.

“During lockdown last year, the senior leadership and BYOD teams ensured every student had a device. Covid allowed them to fulfil the purpose of the group, which is to provide devices for kids in our community, at a time when they really needed them so they could learn from home during the lockdown. We were one of the only schools to have 100 percent of our students having devices at that time.”

Whether it was replacing a battery or optimising the RAM and memory, upgrading the software and installing a Windows system, or turning devices into Chromebooks, the BYOD Support Club found a way to upgrade devices donated by the community.

When asked how Hadi and Owyn learnt their skills, Jennie replies: “Well – it wasn’t us! They came in with most of those skills from doing their own research, just pursuing their own interests. They come here and teach us! There’s real ako in the project.”

Hadi and Owyn are now at Otago University, but continue to be involved with RAD and have travelled the country training students in the skills required to refurbish and upgrade laptops. 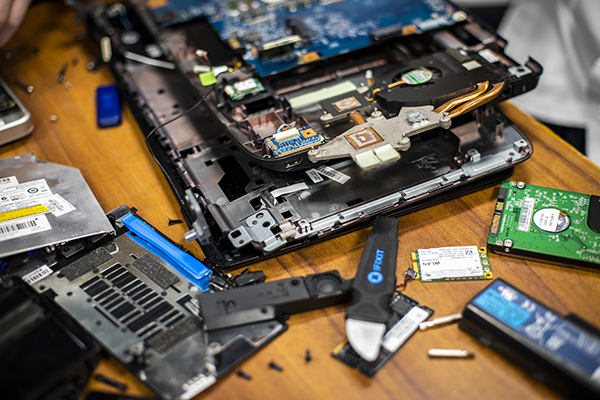 The Recycle a Device initiative began to grow, and businesses showed their support.

“During lockdown last year, we were being offered used laptops from the corporate world,” says Bronwyn.

“You can’t just give somebody a used laptop – there are data security issues to solve and you need to ensure the device will be fit-for-purpose, and we didn’t have the infrastructure to support that. So, we decided it was time to set something up that could help with this.”

“As part of this, we found the Aotea College students who had been running their own community-based laptop refurbishment programme. It became apparent that what they were doing was amazing and we wanted to scale it up.

“There are three key points that Recycle a Device is all about: we get fit-for-purpose laptops into the hands of those who need them most; we upskill high school students with in-demand tech engineering skills; and we also tackle the e-waste issue,” explains Bronwyn.

“During the one-day training course, the ākonga got hands-on with micro screwdriver kits and took old laptops to pieces, completely stripped them. They practised swapping out broken components with other ones that works. The trainers showed them how to blow out dust and replace thermal paste to stop the laptops overheating, and install a clean Windows 10 OS.

“Ākonga learnt how to put a Chrome OS on them and turn them into functional Chromebooks.

Greg says he now has several refurbished touch screen laptops to use in science classes.

“They’re loaded up with productivity software for education. And as part of the RAD scheme vision, we are rolling out ex-corporate laptops to community groups and whānau who do not otherwise have a device, so it really feels like we are doing a positive thing for the community,” he says.

There is demand for Māori programmers and Greg says an initiative like RAD widens the aspirations of ākonga and introduces them to new skills and possibilities.

RAD’s kaupapa is that half of the refurbished computers are distributed in schools and to whānau and the other half are given to community groups in the school area. “You send a device home; you will empower the whole whānau to access the online world and reach out and connect with people and groups online.

“I’m so excited that digital technology is giving the kids access to learning those skills, or knowing they exist and being a bit curious. It’s giving them confidence that they can try something new and dreaming that they could have a career in IT,” says Greg. 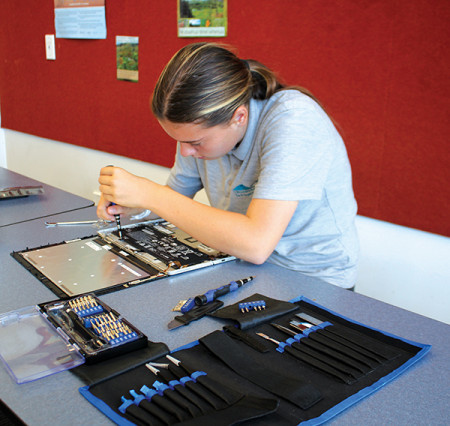 Kyra (Year 10) is one of the students from Te Wharekura o Mauao involved in refurbishing laptops, as well as learning valuable skills.

Discussions are underway to train some bilingual trainers from a wharekura to take the knowledge and skills to other Māori medium kura around Aotearoa.

“We’re keen to deliver this training in te reo with a te ao Māori view. The digital divide affects Māori and Pacific people at a disproportionate rate and it’s really important for us to be able to do that,” says Bronwyn.

RAD hopes to train more trainers and run the refurbishment programme at 15 schools nationwide this year.

“We’re going full steam to make that happen this year. We are looking for schools who are willing and able to participate in our refurbishment programme. The schools that participate, we work with them to understand what their need is for devices in their school.

“If you have an interest in social responsibility and tech, then this initiative is perfect for young students,” Bronwyn says.

Early on at Aotea College, there was a small core of about six dedicated students. There is now a critical mass with a group of 21 students refurbishing computers, and the reins have been handed to Year 12 students, Ryan Pugh and Grayson Fenemor.

“Owyn and Hadi’s legacy is carrying on and my job is to make sure that new leaders step up and that the programme keeps running and we continue to be efficient in getting devices out to students who need them. These efforts are helping to bridge the digital divide at Aotea College,” says Jennie.

“One of the things we say to schools is: ‘If you have a student who is participating in this programme who has a tech engineering talent and is also able to stand up and teach other people, we need more trainers. That’s a paid job for these kids,” says Bronwyn.

Find out more, on Recycle a Device (RAD)(external link)

Hadi Daoud and Owyn Aitken talk about their goals of addressing digital inequity and gender disparity to build skills and create opportunities for fellow students. 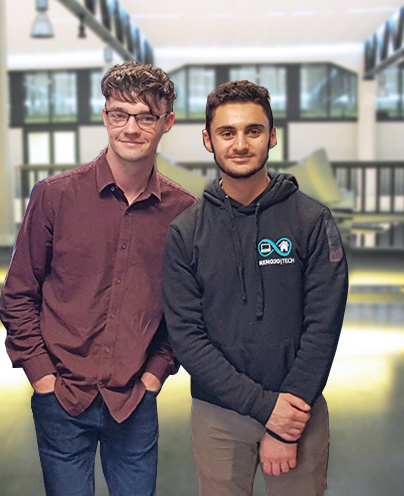 Owyn and Hadi have been involved in refurbishing computers for about six years. Now at university, they continue to travel the country training students in the mahi.

Why do you think a recycling computers scheme is important?

I think it’s difficult to realise the sheer impact not having access to a digital device can have on a student’s learning. Seeing peers unable to access classwork, or even message their friends and teachers outside of school is ultimately what drove Hadi and I.

Being able to address these inequities has certainly been an important part of our work, and then also being able to train and upskill students is of equal magnitude. It allows us to not only provide opportunity within a student’s time at school, but to also open doors to many different career opportunities.

What has been your greatest satisfaction about being involved in Aotea College’s BYOD Support Club?

Our greatest satisfaction has definitely been seeing dozens of students crowd into our workshop at Aotea College twice a week to take part in getting more devices out into the community. It’s heart-warming to see students who deeply care about contributing to their local community and also understand how the skills they’re learning will help them later down the line.

Seeing this enthusiasm matched in other schools as we travel throughout Aotearoa has definitely reaffirmed that this is one of the best aspects of the work Hadi and I do.

How has your involvement in BYOD Club /RAD helped your hopes and aspirations for your career?

Owyn is studying Computer Science this year and I’m doing a Bachelor of Commerce, majoring in economics and finance. We’re both keen to continue our involvement in the tech and social enterprise sectors – namely through Remojo Tech, which will continue to be a member of RAD; providing training to schools throughout 2021 and beyond.

We recognise that the opportunity we’ve been given to contribute to RAD has also opened up many windows into the tech industry and we both look forward to leveraging these pathways as we pursue both our career aspirations and desire to give back to those in need.

What did you do to encourage girls to join the group?

In 2020, Remojo Tech noticed a definite gender disparity in BYOD Support group meetings. For us, it’s important that the BYOD group and RAD are providing support in both the social equity and gender equality fields. This led us to work with a member of the BYOD group, Molly Ravenswood, to run several STEM workshops focused on encouraging girls to get involved in both BYOD and the industry as a whole.

We were grateful to be able to work with Vanisa Dhiru, former President of the National Council of Women of New Zealand, on these workshops. She provided advice and free tickets to WITCON and NetHui for the girls who took part.

How successful were you?

The girls who took part in the workshop continued to come to our bi-weekly BYOD meetings and excelled making many valuable contributions throughout the year. Hadi and I hope that the workshops will provide many opportunities for them both now and in the future. 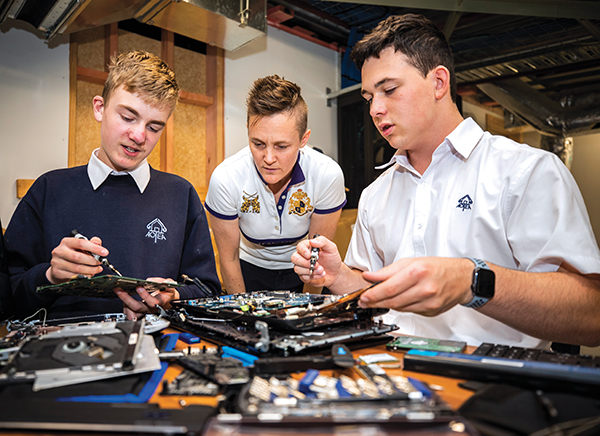 Benjamin and Grayson explain to Jennie the hardware parts they are working with.

Recognising and Responding to Grooming-WEBINAR