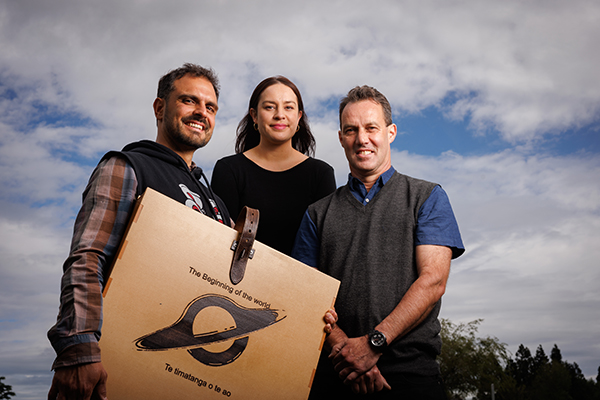 Felipe Queriquelli teaches art and social studies at Forest View High School in Tokoroa. In term 3, his Year 10 social studies class developed an historical board game as a group assessment for a world history unit. The idea for the game came about after Felipe carried out a student voice survey in which his students provided plenty of good feedback but also said they needed some time for playing, or learning for fun.

“I started to research play-based and project-based learning. We used historical events from the Big Bang, to World Wars I and II, to the invention of the computer, and designed a board game.

“I split the students into four groups: one group was responsible for the initial research; they were researching, evaluating and comparing the sources; then there was a group that had to narrow down the information for the cards; then by using the information, they worked together to make the rules based on their chosen historical event,” explains Felipe.

“It was really good to coach them through the thinking skills, such as analysing, solving problems, and inquiry. All these skills have been developed through this game – as well as innovation and creativity.

“I think that play-based learning is great for intermediate students, those in Years 5, 6 and 7 – but it’s the first time I’ve done it with secondary students,” he says.

By using purposeful and authentic contexts, Felipe was able to provide opportunities for learning that the students were passionate and enthusiastic about. It’s important to foster the development of skills across the curriculum, including the key competencies so that learners can become confident, connected, actively involved lifelong learners.

The project also involved developing computational thinking skills such as identifying the patterns and differences in the different historical events, says Felipe.

Through this process, ākonga developed the game which combined imagination and play-enhanced problem-solving and critical thinking skills.

“It’s a dual coding type of learning experience – I use a lot of dual coding with arts and social studies, because the link between images and writing is very important to trigger their thinking.”

The project also encouraged students to use their interpersonal skills, as students learnt leadership skills and how to interact, negotiate, cooperate, and compromise. 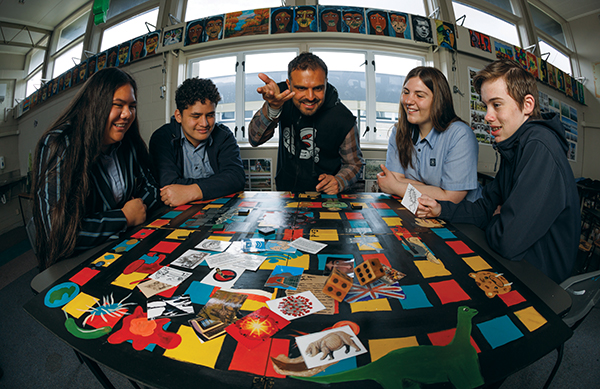 A throw of the dice and a new fact is learned. From left: Lovey, Pini, Felipe, Charlotte and Thomas.

Students developed the one metre square game from scratch, with technology teacher, Darcy Belfield making the final board game, which is called The beginning of the end / Te timatanga o te ao.

The game features a journey through houses, each representing an era in history. Players throw two dice and when they land, they pick up a card, read history facts and then follow a rule which is related to that era.

For example, if they land on the Industrial Revolution, which features the development of steam engines, the player can ride forward several spaces.

For technology teacher, Darcy Belfield, helping turn the students’ ideas into reality is an example of cross-curricular learning through the technology strand he’s keen to explore.

“The move towards integrated learning is starting to happen in our school – I’ve been talking to the science teacher, who’s very keen to do 3D printing as a chemistry project. The business teacher has also combined business and technology all in one project and they are developing, designing, and selling products.

“Felipe is essentially doing a technology project – because that’s how my students would start their projects, with some research, then design and then evaluate it. We also do a lot of art. It’s massively cross-curricular and he’s effectively modelling how you can achieve this. I could see a game design project for senior students as a comprehensive technology project,” says Darcy.

Felipe already has further ideas for developing the game as he says students were highly engaged and still occasionally play the game.

“We could develop different models. For example, the medieval era is one game and whoever wins that might go to the modern era. We could extend it to relate to the history of Tokoroa, including Māori culture and colonisation.

“As a teacher, it was an amazing experience. I found myself not completely prepared, but now I am creating a structure and I know how to guide and scaffold the kids properly from the beginning to the end. Social studies is full of dense information and it’s all about trying to spark their critical thinking and curiosity,” says Felipe.

Mellisa Chesterman is faculty leader of humanities at Forest View High School and says the board game project is a shining example of how learning doesn’t need to be linear and can be used to foster genuine enjoyment.

“Felipe came to me with a superb idea for his class’s world history unit and wanted to try a collaborative activity that fostered creativity. As an educator, why would we not support this opportunity to create engaging and interactive learning?” she says.

Students were given an opportunity to be a part of a collaborative, supportive and creative learning environment centered around a context relevant to their learning in social studies. Mellissa says it pushed many of them out of their comfort zones as they took ownership of their part of the project, worked together and managed themselves throughout the progression of the board game.

The rich learning context meant that students worked on a range of valuable skills, not only content knowledge for the social sciences learning area.

“The objective was to allow them to foster their own sense of ownership in how they engaged with the project; and the learning was a by-product of that. Essentially, the students got to see the fruits of their labour in a project which they can be proud of.

“Not only was it original, but really well constructed and allowed different types of learners to have some buy-in to how they contributed. It also allowed them to cross into other learning areas like technology and art,” she says.

Mellisa sees potential for such cross-curricular game-based learning across many high school subjects based on teachers’ passions and areas of expertise.

“This can absolutely work in every learning area and it really comes down to how creative you want to be.

“In history we see the benefits of this game and how it could be used to fit any context. In English it could be used exactly the same, or as a revision tool where we ask questions based on themes, genres, comparative texts etc.” she says.

It’s important to give staff freedom to take risks, give things a go, and not overthink the logistics, she argues.

“Much like students we learn from trial and error, so when it comes to education and finding ways to incorporate new ideas, we have to be open to try. As long as the intention is there, the rest will follow.

“As faculty leader, it was very important to me to ensure that my staff feel supported and are given the freedom to create their own activities. This shows we need to support each other with our ideas and allow people to shine or at least find their forté. If we become stagnant in what has always worked, we often miss out on opportunities to grow and upskill. Felipe is a prime example of harnessing your gifts in new and inventive ways and sharing them with others,” says Mellisa. 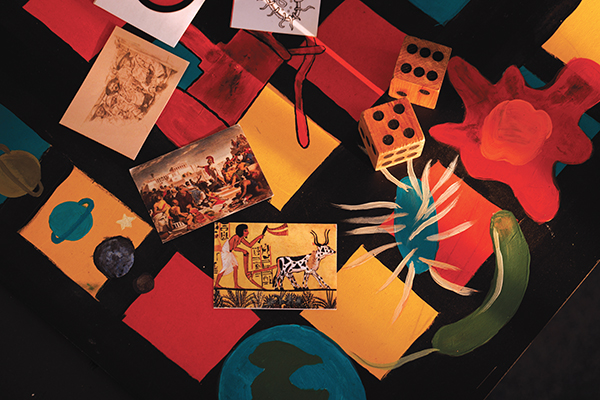 Game elements include two dice, and cards with history facts and rules which relate to each era in history.

What was one key thing that you learned from the board game project that is unrelated to history?

Thomas: Friendships that weren’t there are now there because we were put into groups, and leadership if no one else was taking lead.

Charlotte: One thing that I learnt from doing this board game was probably that working together as one big group can have its ups and downs, but overall having a few people work on it altogether does speed up the process.

Pini: How a board game is constructed.

Lovey: Something I learned from this activity was how each other worked out what everyone’s strength and weaknesses were.

Did you think the game was a good way to learn about history?

Thomas: Yes, learning while having fun is always the best way to learn.

Charlotte: I think personally that the boardgame is a great way to learn about history because it’s interactive and people can have fun with it when it’s in the format of some type of game.

Pini: It is a good way to learn about history, but you don’t get to learn the full history of our planet.

Lovey: Yes because you learned about it in a fun, everyone included, interesting way.

What did you like doing the most and why?

Charlotte: The thing I liked the most would have to be the research and the building of this game, because you never know what you’re going to find on a topic you never knew about if you’ve never searched for it.

Pini: Watching everyone participate in making the game, but my favourite part was definitely playing the game itself. 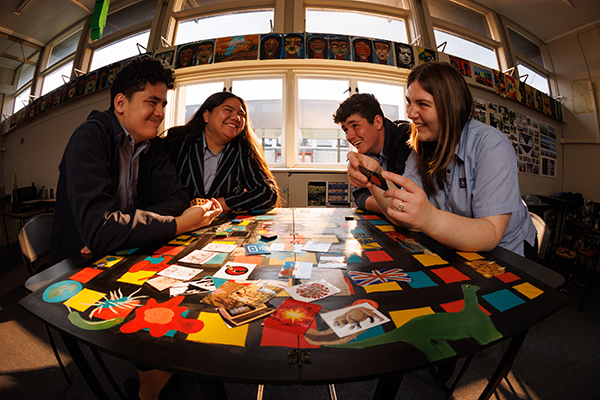 The beginning of the end / Te timatanga o te ao.

As Aotearoa New Zealand’s histories and Te Takanga o Te Wā is rolled out across the motu, ākonga share their thoughts about the localised content.

Tumuaki from kura and schools already using the new framework share how the content is being integrated.

As Aotearoa New Zealand’s histories and Te Takanga o Te Wā is rolled out across the motu, ākonga share their thoughts about the localised content. Read more

Tumuaki from kura and schools already using the new framework share how the content is being integrated.  Read more