Coloured markings have brightened up the grounds and inspired more physical and interactive play at Kamo School in Northland. 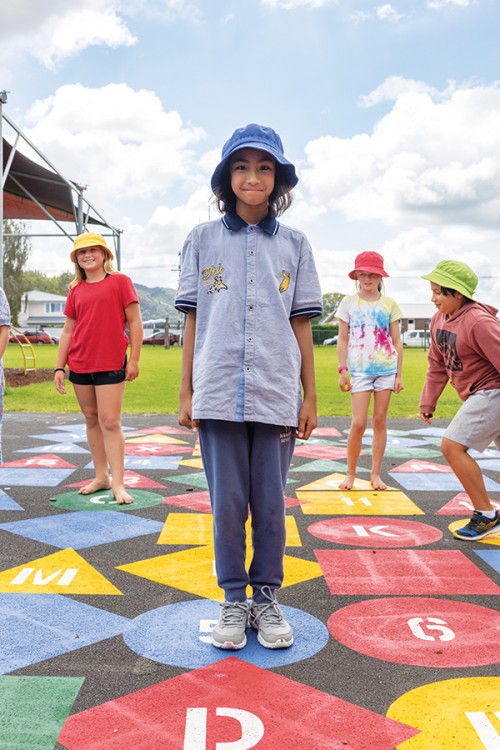 “Some children come to school having spent as long as 30 hours on a device during the weekend. There is a real need for play especially in the senior school,” says Renee.

“We want to pull back the layers of iPads and gaming, and encourage children to move and interact.”

According to research published by Sport New Zealand, play allows children to experience fun, joy and laughter in a way that is important to them. It’s also where they develop and practise life skills.

Positive benefits of play include being physically active in a fun way that develops fundamental movement, encouraging self-directed creativity and innovation, improving social and emotional connection, and improving resilience, independence, and leadership by allowing tamariki to determine their own outcomes.

As a new entrant teacher, Nicki facilitates learning through play every day.

“The new entrant rooms look very similar to those of kindergartens,” says Nicki, who was a kindergarten teacher for 15 years before joining the primary school.

There’s a family corner with dress ups, dolls and a play kitchen, and spaces for art, Lego, reading and meeting. The familiarity of the layout and activities ease the transition from early learning programmes to primary school meaning that ngā tamariki are settling in quickly, she says. And the environment supports a more engaged approach to reading, writing and maths. 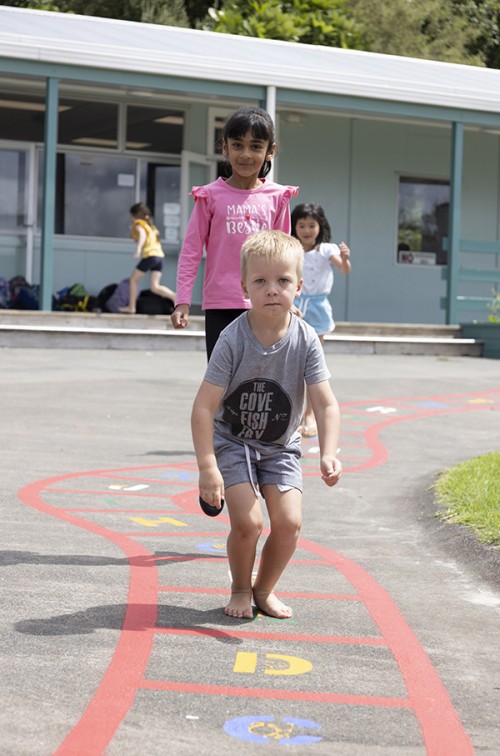 Kamo School ākonga adore their decorated playground and the many games they inspire.

Renee and Nicki reached out to local Healthy Active Learning facilitator Natalie Wilcock, a regular visitor to the school, for ideas.

She suggested decorating the expansive sealed areas of the school grounds with coloured markings for games such as hopscotch, te reo Māori hopscotch, an alphabet number trail, a compass, and a numbers grid.

“Natalie came in and drew chalk markings to see if the children would engage and it was a hit. Children were so excited and were on it all the time, not just at break times but when moving from the classroom to the library, for example.”

There was hopscotch, number lines and shapes, and Natalie took direction from ngā tamariki, both verbal and drawn.

“Their responses came immediately and with great energy from children right across the school.”

The school applied successfully for $25,000 from Tū Manawa Active Aotearoa which funds programmes delivering play and sport for tamariki and rangatahi.

Renee and Nicki engaged Cambridge-based company Aceline Services to install permanent markings during the summer holidays, an assignment that was completed within one day during the summer break. The “Play on the Way” trail was ready for use.

“They were really good to deal with, very accommodating,” says Renee. “They had a booklet with templates for us to choose from so we did a lot of measuring and sent them photos of our spaces with requests for what we wanted where. Our caretaker Rob Johnson was extremely helpful. Some courts had faded markings and we covered those with similar markings.”

The finished work was a little different to how Renee had imagined.

“To be honest, I was a little disappointed at first because I thought the activity lines would promote structured movement, but they are just markings, suggestions for play. But when I saw how the kids were using them to create their own games, I thought ‘wow, this is so cool!’ When they line up for swimming, they don’t just stand there anymore, they ‘Play on the Way!’”

The markings, which begin just inside the school gate and continue around and across all sealed areas, invite everyone – ākonga, staff and visitors alike – to run, jump and hop either alone or alongside any number of friends.

“It’s bright, it’s colourful and it’s given the school a face lift. Parents join in too and it is encouraging to the very tired child being picked up at 5 o’clock from after school care. Dad picks them up and starts hopping along the markings to the gate and they join in.

“And it’s totally inclusive, it doesn’t upset any child with additional needs. It’s a different kind of play, a different way of moving around the school, and every child is finding their way of using it.”

“The biggest thing is how the children have started inventing games, their imagination has come back through painted lines and colour shapes,” says Sally.

“We often think of play as being centred around equipment, but we have found this is a good tonic, the children can be creative. It also provides a great brain break and circuit breaker for behaviour.”

The funding also stretched to the purchase of 10 Magic Play Boxes, huge crates filled with upcycled materials such as tubes, tyres, ropes, and wood, designed to trigger inventiveness in the playground.

These boxes will be introduced gradually so ngā tamariki are not overwhelmed, says Renee, and the children will be invited to have a say in how the gear is used and stored.

“We are a Positive Behaviour for Learning (PB4L) school, and we’d like to use a tuakana-teina approach to using the gear with the seniors taking some ownership.” 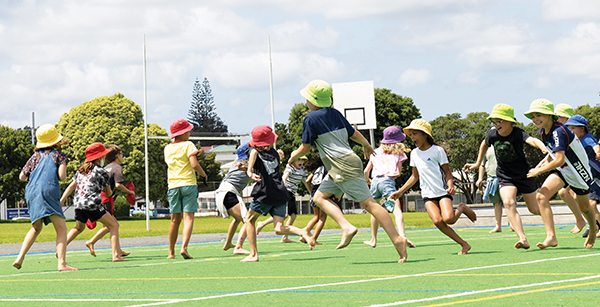 The new ground markings have inspired ākonga to be more inventive with play.