A computer literacy course is empowering Pacific parents to be more involved in their children’s learning. 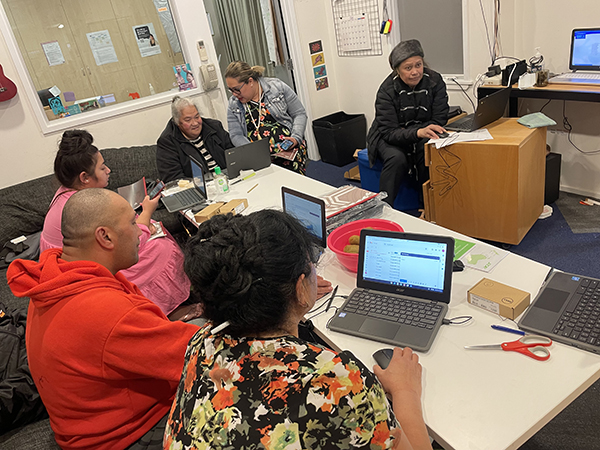 In a world where connectivity is largely digital, computer literacy is a lifeline.
Yet one in five Pacific adults has no computer skills – twice the rate of non-Pacific populations – a disadvantage that became glaringly apparent when the pandemic hit.

“Before Covid, tech was considered something that belonged to other people. Now, it’s considered essential to our community, too,” reflects one respondent to a 2020 Department of Internal affairs survey about the digital divide.

The 360 Tautua Trust in South Auckland is one organisation that stepped into the void, creating a digital inclusion programme for Pacific seniors and parents called Digi-Matua.

“With Covid, our people needed to be connected to be able to access church services because that’s basically their lives,” says Romana Fetu, chief executive officer at the Trust.

The programme is funded by the Tertiary Education Commission but Romana, as a Talanoa Ako partner, saw synergies with this programme and created a partnership with the Ministry of Education through the PICI programme delivery team to use Talanoa Ako to support parents who attend the programme and are motivated to support their children with a device and training on how to use it. The Ministry supported this through the Tatou Fa’amalosi fund to ensure each family could get a device, and for the graduation ceremony at the end of the day.

Every participant received a Chromebook, and those who did not already have internet connections were supported to find an affordable provider.

“The programme is focused on the family,” says Romana. “As Pacific, we don't come alone, we come with our villages, and these people, the aunts, uncles, nanas, and papas, are the ones who help us empower parents to support their children’s education.

“Parents had been telling us that they didn’t know how to access school reports on email or notices on the school app, they had no idea. Which meant that come November or December when the final report comes through, it's a bit late to support the child if they have been struggling throughout the
year.”

Each participant is supported to set up an email address and shown how to send emails.

“We ask them to get the child’s email address by the end of the third session, then we encourage them to email the teacher or to reach out to a Pacific teacher at the school, to open those lines of communication. We also teach them Google translate so they can type in a question in say, Samoan,
and it'll give them the English version. And we show them how to export that to an email.

Rather than saying, ‘Here’s your device, now go do your homework’, we suggest having the laptop on the dinner table so Mum can check in with the kids while she’s making dinner. It opens a lot more talanoa.”

The Digi-Matua workbook comprises 10 modules starting with how to charge the device and turn it on through to internet safety and using the Google suite. On completing the programme, participants receive a certificate.

A door to achievement

“It’s so rewarding for them because a lot of them have never studied. They've just worked ever since stepping foot in this country. So, on completion they get the device, they receive a workbook, they receive a covered case for their device and a three-year warranty. Then we have a graduation ceremony where everyone comes together with their whānau, and we have some kai. For some of them it’s the first certificate that they have ever received, and they did it to champion their children's education.”

One mother shared what Digi-Matua meant for her. “This learning and this device have been very important to me and my children. It has helped greatly with my children's homework, using the internet, and emails and communication with my family.”

Mele Tonga-Grant works for Hutt City Council and coordinated the first Digi-Matua course there in May.

“Although the facilitator was online, the participants wanted to meet physically especially for those first few sessions. There were people who had never touched a desktop computer, never mind a laptop. We met in a library, and everyone brought their families along.”

Mele says the first session was very difficult for participants, “even just using a mouse or grasping the difference between a username and a password. But by the last session everyone could just pull out their laptop, log on and get going. These are small things that most of us take for granted and now they can do it, too.

“What has really stuck with me is seeing how the young people responded. The children and grandchildren stepped into a role of expertise, and they showed great patience. And because the class was in Tongan, the young people learned to say some technical words in Tongan, or how to explain an idea or concept in Tongan. For our generation and those who come after us, we have lost a lot of our language, or we can understand when it’s spoken but speaking it back is a stress. So being in a space where we need to communicate in Tongan so our parents and grandparents can understand meant that everyone was learning from each other.”

Mele says the course has sparked a thirst for learning for many participants.

“Some of them had never graduated from anything so there was great joy in getting a certificate of achievement. They just wanted to help their children and grandchildren to achieve. Now they see themselves as graduates and it’s taken them to a place of being able to dream, to do more for themselves.”

Growing the next generation of readers and critics

The rebirth of an established programme aims to grow the next generation of literary critics in Aotearoa and get them talking about books.

Igniting a passion for writing through creative art

Y5–6 tamariki in Tāmaki Makaurau Auckland have achieved extraordinary gains in writing after a taniwha art project inspired them to write their own Māori myths.

Growing the next generation of readers and critics

The rebirth of an established programme aims to grow the next generation of literary critics in Aotearoa and get them talking about books. Read more

Igniting a passion for writing through creative art

Y5–6 tamariki in Tāmaki Makaurau Auckland have achieved extraordinary gains in writing after a taniwha art project inspired them to write their own Māori myths. Read more