On track – Supporting the move from early learning to school

Ōtūmoetai Kāhui Ako in Tauranga is seeing the benefits of allocating a learning support coordinator to work across early learning services and with schools. 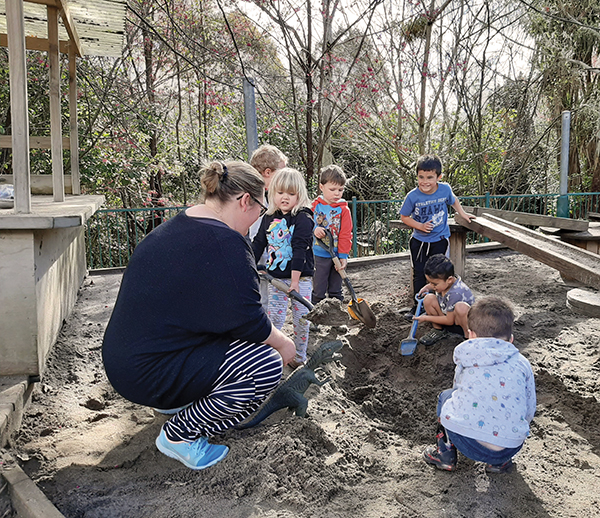 The Village in Tauranga is one of 24 early learning services benefitting from the learning support approach taken by the Ōtūmoetai Kāhui Ako.

In her role as a learning support coordinator, Vicky Wilson works across the 24 early learning services in the Ōtūmoetai Kāhui Ako to help the centres meet the learning support needs of their children and ensure they enjoy smooth transitions into primary school.

“I liaise with the centre managers to make sure they are up to speed with the processes – getting observations done, getting referrals in, accessing the right sort of support for the children, knowing what sort of support they’re going to need as part of the transition.”

Vicky says there is a real need for the sort of work she is doing.

“In terms of supporting early learning teachers I think there’s a lot of value in being able to go in and get those requests moving and make sure they’re happening.

Indeed, it’s a system that appears to be working well. But it didn’t happen overnight.

A springboard for success

Vicky’s role has emerged as the product of strong relationships formed between schools and early learning services in the Ōtūmoetai community.

Learning support has also been a high priority for the community from the outset, with the Kāhui Ako allocating one of its across schools teacher positions into a learning support role. They were therefore well placed to work in partnership with the Ministry of Education from late 2016 to help develop the Learning Support Delivery Model.

Theresa Rosborough, who was appointed to the learning support across schools role, was instrumental in this process.

Theresa says based on feedback from workshops, they identified five things that weren’t working well in special education at the time; these informed the features of the Learning Support Delivery Model.

“One aspect that began to emerge as one of the most important was the Learning Support Register,” says Theresa. “The register helps inform the PLD needs, strategic planning and budgeting for your schools and centres.”

Because the early learning services were already an integral part of the Kāhui Ako, it made sense to introduce Learning Support Registers into the centres as well as the schools.

“The Learning Support Register is the glue between early learning and primary. By having those registers in the ECEs, it helped us with those transitions in terms of knowing who was coming into our school system.”

However, Theresa quickly discovered the workload of monitoring the Learning Support Registers for 24 early learning centres, in addition to those for the schools, was clearly too much for one person.

Recognising the importance of early learning

“We always start with the philosophy that we start in early childhood,” says Theresa.

“And it’s a straight-from-the-heart philosophy – there’s nothing tokenistic about it,” adds Vicky.

Matt Simeon, principal of Pillans Point School and the Kāhui Ako learning support lead, says their successful approach stems from a foundation of solid, collaborative relationships between the schools and early learning centres.

“It comes back to that whole notion of trust. True relational trust.”

She gives an example of her work with one of the centres.

“We’ve got a really good relationship in there. It’s one of the places I go into regularly and we have regular conversations about who is on the Learning Support Register; without mentioning names we’ll have conversations about children they’re wondering about, how to support them with getting the right information and sharing teaching strategies that I think will be beneficial.”

The emphasis on good relationships extends to working with agencies, Matt says.

“I used to explain Theresa’s role as a ‘relationship broker’. She was essentially brokering relationships with all of the different agencies out there.

“The biggest ‘aha!’ for me as a principal has been how many agencies are actually out there when you know how to get hold of them.

“The Kāhui Ako model allowed agencies that one-point entry. Rather than having to broker relationships with eight schools and 24 ECEs, they had one person to come to – and that one person had the relationship. It became a much smarter model,” says Matt.

Theresa agrees their approach has helped them operate more efficiently.

“One thing we’re finding with the register is that it isn’t so necessary to have a one-to-one situation. So if there were four children in early learning centres across the Kāhui Ako who had communication difficulties, Vicky would try to address that more efficiently.”

“It’s working really well,” agrees Vicky. “The more we spend time together and the more relational we are, the better we are becoming at sharing that information.”

Of course, when it comes to sharing information, it all has to be done within the parameters of consent and privacy.

“It’s not just a matter of just looping in early learning – the centres have also had to be brought on board with all that the Learning Support Delivery Model entails, things like privacy protocols, Memoranda of Understanding,” says Theresa.

“We had to get through all of that historical misunderstanding around agencies and putting little people’s names on lists.

“In Ōtūmoetai we say, ‘it’s a community of care’. If the little one comes into our community of care, we take their hand and for as long as they need their hand taken, we go on through with them. And the reason we do that is the trust of our parents and whānau in the sense that they are happy to sign a consent to say, ‘Yes, we would like our child to be part and parcel of all that you do with them’.”

Theresa says effective leadership and collaboration have also been instrumental in achieving their vision.

Matt adds that it is important to maintain continuity in the event of changes to school leadership.

Boards of Trustees are aware of the importance of what the Kāhui Ako is doing in this area, so they can factor this in when appointing a new principal, he says.

It’s also about sharing good practice. Together with Robyn Barraclough from Whakatane Kāhui Ako, Vicky coordinates a network with other learning support coordinators in early learning centres in other Kāhui Ako. There are currently 11 members, and she is keen to help develop good practice in and beyond this group.

Matt says having Vicky there to help guide the transition process for children with learning support needs has made the whole process much easier for whānau and the receiving schools.

“It’s all about, ‘I know you, and you know me’; it’s bringing the families in so they can say, ‘These guys have got it, they know what they’re doing’.”

Flexibility is also important when it comes to transitions.

“The school transition model is typically two visits, but some families need a little bit more than that,” says Theresa. “If Vicky thinks they need six weeks’ transition, she’s able to say to the school, this one might need to pop over the fence a few more times.

“It’s being relational, it’s being flexible, it’s being able to know the child from an early time and follow them through as much as you possibly can.” 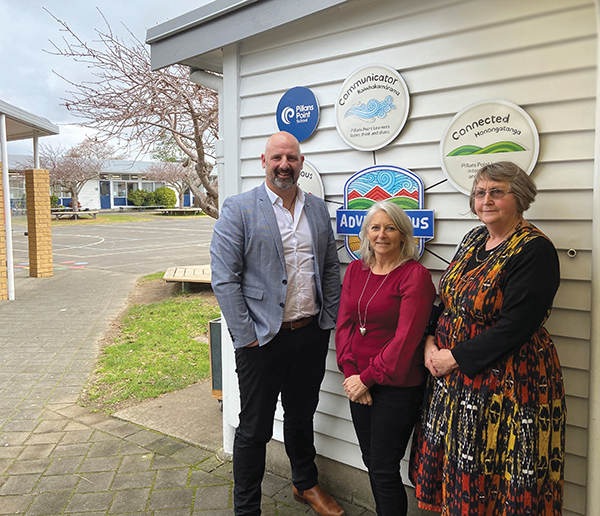 Pip Jonathan is assistant centre manager at The Village, one of the 24 early learning centres in the Ōtūmoetai Kāhui Ako. Pip says it is great to have access to the expertise and support Vicky brings as learning support coordinator for early learning.

“It’s good to have that extra set of eyes to discuss any ‘wonderings’ we might have about a child. And it encourages us to have those courageous conversations with parents,” says Pip.

It is often the children with mild learning support needs who benefit from having someone like Vicky there to discuss concerns, as these are the children who risk not accessing the support they require, says Pip.

Vicky’s input is particularly useful when it comes to preparing children and their families for the transition from early learning to school, she says.

She gives the example of one child who required some support with mental health. “The parents were really confused about where to go and what to do. Having the learning support coordinator there to report info to the school really helped with that child’s transition.”

Pip is also grateful that Vicky will manage the Learning Support Register for all the early learning services in their Kāhui Ako, ensuring everything is entered consistently and correctly.

Lisa Chan had some concerns about her son Bentley starting school.

Lisa and her husband Lindsay are the owners and managers of the early learning centre Bentley attended, and Lisa’s mother works there too.

“So Bentley is very connected to our whānau and we knew separation from that environment could be a challenge for him. He also gets anxious and he likes to know what’s going on,” says Lisa.

“It had been identified that he might potentially struggle with transition – although he was unlikely to continue to struggle once he was settled at school.”

“Having someone like Vicky to help has been wonderful. She worked as the intermediary between the centre, school and whānau and coordinated an action plan.”

The plan which outlined additional school visits, helped make Bentley’s teachers aware of his needs and suggested some tools to assist with his transition.

“He’s had a wonderful transition,” says Lisa. She says the school has been really supportive of the process as well.

“From a centre’s perspective, we see tamariki with many different needs. For the sake of tweaking a few things to meet their needs, I can’t see why wouldn’t we want to do that?”

From Zumba to a book club to a design competition, many organisations have come up with innovative programmes, resources or competitions to help teachers and pa

Home Learning | Papa Kāinga TV is continuing to bring high-quality educational content to learners, whether they’re at home or at school.

A pilot scheme in which Resource Teachers: Learning and Behaviour (RTLB) in south Auckland have been trained to deliver the Incredible Years Autism programme.

From Zumba to a book club to a design competition, many organisations have come up with innovative programmes, resources or competitions to help teachers and pa Read more

Home Learning | Papa Kāinga TV is continuing to bring high-quality educational content to learners, whether they’re at home or at school. Read more

A pilot scheme in which Resource Teachers: Learning and Behaviour (RTLB) in south Auckland have been trained to deliver the Incredible Years Autism programme. Read more