A Porirua primary school has seen a transformation in children’s behaviours since adopting the Neuro-sequential Model in Education (NME) developed by American psychiatrist and author of The Boy Who Was Raised as a Dog, Dr Bruce Perry. 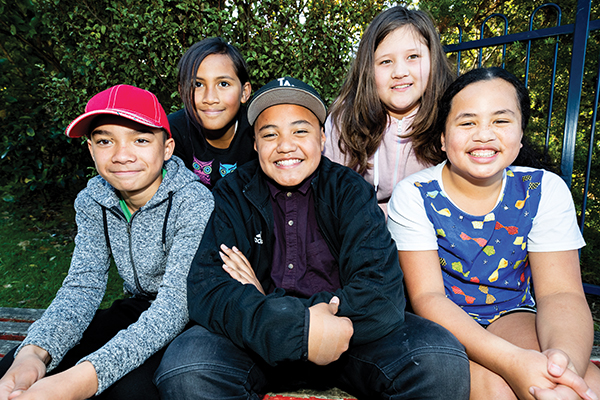 About two years ago, Glenview School in Cannons Creek was struggling with the behaviour and engagement of a small proportion of students.

“Many of these children struggled to settle and we saw much aggressive, defiant and disruptive behaviour. We knew we needed to do things differently,” says principal Lynda Knight-de Blois.

In 2018, during a sabbatical, Lynda visited schools in London, Finland and Estonia to research trauma-informed models. Her school has since had a strong focus on PLD on trauma-informed practice.

“The PB4L (Positive Behaviour for Learning) framework and practice was well embedded when I came to Glenview five years ago. However, I think most people would acknowledge that there are a small percentage of children in most schools, often with backgrounds of trauma and stress, who need an increased level of support,” explains Lynda.

Dr Perry’s Neuro-sequential Model of Education (NME) has been practised intensively for the past year. Prior to that, staff attended workshops with Nathan Mikaere Wallis (neuro-science educator) and Katherine Berkett (psychologist and NME practitioner) and all staff read The Boy Who Was Raised as a Dog.

“Each chapter is a case history of a child who has suffered in different ways, who Dr Perry has worked with. We found ourselves making lots of connections to the children that we work with.

“We have been learning how the brain and the nervous system work and the fact that the ongoing stress that our children have experienced means they develop an over-sensitised stress response system. The smallest of things which wouldn’t normally be a trigger, can trigger them. We will see some children arrive at school and they are constantly scanning the environment: that’s hyper-vigilance,” says Lynda.

The practice, which shifts perspectives from asking students ‘what is wrong with you?’ to ‘what has happened to you?’ is increasingly being used in Australia, the United Kingdom and the United States. 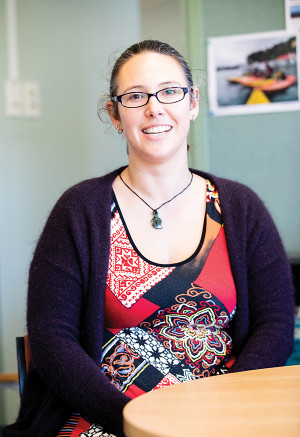 Jess Whatford teaches a New Entrant/Year 1 class at Glenview School. She says the NME model involves trying to identify what is causing behaviours and helping traumatised children rather than punishing them.

“We do that with a lot of talking – we talk to our families and our kids; we observe and we see patterns that emerge and try and work out the ‘why’ of why things are happening.

“What we had been doing for the nine years I have been teaching hadn’t worked. Maybe if this other approach is working overseas, this is something we should be looking into and I do think it is the way a lot of schools are going to be going,” she says.

Four days a week, first thing in the morning, Jess’s class spends about an hour in the bush. The dynamic nature of the bush play programme has changed the behaviours she was seeing in her class.

“I am really passionate about it. We play – it’s really as simple as that. We don’t take anything with us apart from a box of tissues, some hand sanitiser and some plasters.

“When they first get into the bush, they are a bit unsure and ask ‘What do I play with?’ and I say ‘Well, you’ll find something’ and they do. They play imagination games. There’s a creek – they pretend to fish with sticks, or we will look for actual fish.”

NME focuses on strategies to help children self-regulate their emotions and behaviour. “This is very easily achieved in the bush – it’s all about repetition, running, walking, swinging... and bird song.”

Trauma may be caused by major events, but can also be due to ongoing stress. Assistant principal Tufaina Faraimo says this can include insecurity of housing, poverty, struggling with finances, alcoholism and family violence.

“We live in a fear-driven society and I think people are struggling with life. I think they are using multiple ways to try to cope and survive, and they don’t always pick up the skills required as adults in order to be calm and to raise children,” she says.

Common behavioural issues resulting from this kind of trauma among children include lack of attention and social skills and an inability to manage and regulate themselves.

“We see quite a bit of being in a pressure cooker and exploding when triggered by things. The ability to breathe through things are all skills that we can learn and that adults can support.

“This [NME] approach addresses those behaviours in the sense that we have changed the whole way we work as a school to manaaki [support] and look after our students who are in these situations.

“Instead of responding from a punitive position of: ‘Time out!’, which is what we used to do a lot, we now say, ‘Just breathe’. They come to see Lynda and she plays some music and they sit out on the couch and look out to the hills... sometimes they do it on their own and other times they need to be encouraged to do that,” says Tufaina.

Tamariki will seek out Lynda, or sometimes take themselves to the blue sofa outside her office to calm down.

“It’s very positive and it’s using the kids’ strengths that they already have inside them to help them regulate themselves, so they can do it themselves later,” says Jess. 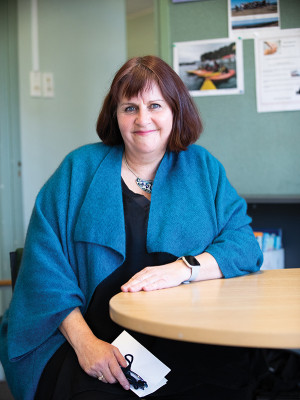 As the Bruce Perry NME model is from the United States, Glenview School has developed a framework – Te Āiotanga – which locates and links to Te Whare Tapa Whā. Lynda thinks the time has come to adopt such a holistic framework.

“Recently we hosted a meeting for our Porirua East Kāhui Ako to test the water. We have surveyed educators to find out what PLD they want and need: trauma-informed practice, Te Ao Māori, Pacific worldview etc.

“I feel like we are at the tipping point because the US, England and Australia are much further down the track. It’s inevitable that we go that way. We currently aren’t looking in the right places to find solutions for children’s wellbeing and behaviours,” she says.

Educators in Aotearoa should view trauma from a Māori and indigenous perspective and understand that it occurs from a cultural context, say Meera Balaji and Balaji Somasundaram, learning support coordinators for the Porirua East Kāhui Ako.

Trauma impacts brain development which can affect students’ ability to learn, recognise emotions and regulate their attention and behaviour. This may result in impulsive or aggressive behaviours, or at the other extreme: withdrawal and inattentiveness.

“When educators understand trauma, they are less likely to view related behaviours as intentional, or stemming from laziness or lack of motivation. We believe this understanding will reduce punitive types of responses that can re-traumatise students.”

The PLD undertaken by Glenview School has seen a paradigm shift to understand the learning needs of children impacted by trauma by shaping school culture and practices that are sensitive to the needs of traumatised learners, they note.

“Creating safe, supporting learning environments and developing positive relationships with students and their families who have experienced trauma play a key role in mitigating its effects.”

In term 3, Glenview School began teaching senior tamariki about the brain, emotions and learning: curriculum the school has developed itself.

“We started with emotions so they could recognise their emotions, label them and communicate them: more than simply ‘I feel mad, sad, happy’, which is often all they can identify at this age.

“Then we talked about what that emotion feels like in your body – physically. If children are going to be able to regulate themselves and calm themselves down, it helps if they understand what’s going on and why,” says Lynda.

Education Gazette sat down with some tamariki and talked about the brain, emotions, gut feelings and what happens if there is a bear in the classroom.

Sienna: If the two parts of the brain lose communication, the downstairs brain goes crazy and if there’s something threatening you overreact. 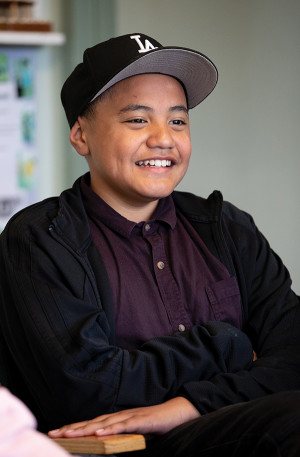 Joe: The downstairs brain is your survival. If you are getting attacked by something... you can either fight, flight or freeze. Imagine it’s like two people and they communicate each time, but when they can’t communicate, the red brain takes control instead and you can’t think.

Nicole: Imagine there’s a bear in the classroom. Instead of thinking what to do, you can either fight, flight or freeze. Instead of thinking about it, your red brain takes control so you don’t just think about it. It keeps your body safe from danger. Sometimes your gut feelings are right.

When have you had to control emotions?

Joe: Sometimes emotions can take over your body. Like once I woke up and I heard my grandad had passed away. I had been happy but once I found out, for some reason I was angry. There was lots of sadness, but then anger. We went in the room and sat there and I walked out of the room and went to my auntie’s room and I cried my face off. It helped [letting my feelings out].

What do you do to calm down? 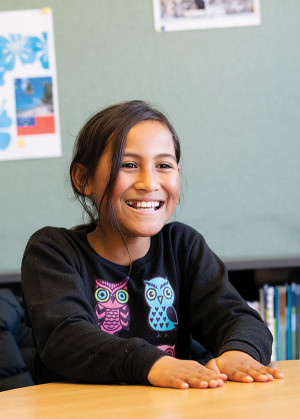 Dezmin: Breathe – sometimes it calms you.

Sienna: Jase Te Patu [mindfulness and yoga teacher] did stretches with us. After a long day and a lot of things are on your mind, it makes you feel calmer, happy and your emotions are in control.

Jennyvette: Sometimes when I get sad or angry, I could just sit down on a chair and think about something else.

Nicole: You also feel emotions in different places like when you feel nervous you feel something at the bottom of your stomach... it feels like your stomach is rising. When you feel scared, you feel shaky and don’t know what to do... you might hug yourself.

Our Lady of the Assumption, a Year 1–8 special character school in Ōtautahi Christchurch, is transforming its approach to physical activity.

Our Lady of the Assumption, a Year 1–8 special character school in Ōtautahi Christchurch, is transforming its approach to physical activity. Read more