My Turangawaewae – exploring identity through the arts

A Creatives in Schools project took students and staff at Sylvia Park School on a learning journey encompassing the arts, mathematics, tikanga and identity. 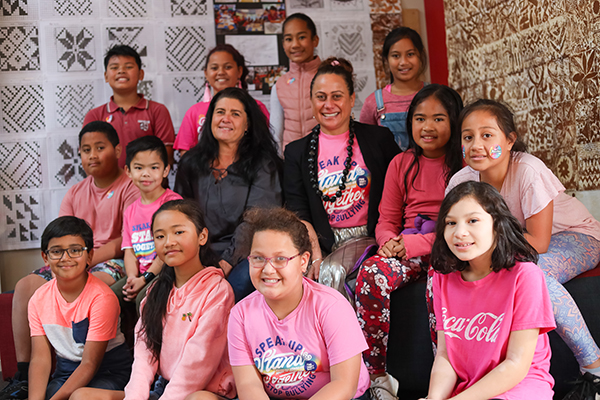 Artist Alexis Neal (centre left) and Sylvia Park School deputy principal Dagmar Dyck (centre right) with some of the students who contributed to the school’s Creatives in Schools project.

Many hands, hearts and minds have contributed to the large tapa cloth artwork proudly on display in Sylvia Park School’s reception area. The collaborative project is called My Turangawaewae and it comprises many squares, each square reflecting the identity and culture of the student who created it.

The artwork is a product of the school’s Creatives in Schools programme, where the school engaged interdisciplinary artist Alexis Neal in Term 1 to work with their Year 4, 5 and 6 students on the project.

Working with Alexis, tamariki used elements of printmaking, weaving and installation to explore their sense of identity and address tikanga Māori traditions within a contemporary context. 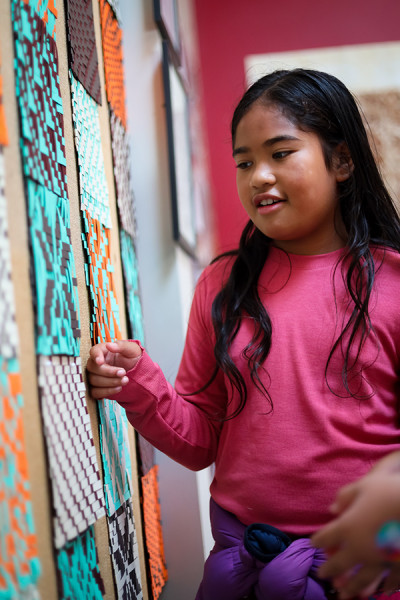 Pelenaise admires the artwork contributing to the Creatives in Schools project.

Alexis explains what was involved. “The kids were asked to design a motif that represented their sense of identity, that then developed through drawing, and then they built their own relief plates, which they printed from, and then that became part of the big collaborative piece. And it was pieced together with four large prints making a contemporary version of a tapa cloth. It was a really nice celebration of the children individually, as a class, and also being part of the school and a community.”

Year 6 student Jayden proudly points out her square. It has a clear floral motif.

“I learned how to kind of work with patterns and colours. Throughout term 1 we learned about Fatu Feu'u and his patterns. He's a Samoan artist,” says Jayden.

Year 6 student Alex’s contribution to the artwork was inspired by his love of Doritos and features carefully constructed triangles to form a concise pattern. His favourite part was trying to get his triangles to fit within a 20-centimetre-square grid.

The project incorporated a strong focus on visual mathematics and complemented what the school’s approach to numeracy. Sylvia Park School has joined the Developing Mathematical Inquiry Communities (DMIC) programme as a way of developing cultural competency among their teachers.

“Pattern making is about numbers,” says Alexis, “It's about a formula. It's about working out a system. And that's how I could relate weaving to mathematics. So we started off with a mathematical drawing grid. They drew their raranga. They worked it out through numbers, so we worked on a 20 by 20 format, and then they counted out the drawings.”

Building teacher capability in the arts

While the finished product is impressive, Alexis says it is the learning that took place behind it that is most exciting.

“What I came to realise very quickly, is that actually, the most important part was the learning process – more so than the actual physical outcome.”

Sylvia Park deputy principal Dagmar Dyck, who is an artist herself, says the learning extends to staff as well. She is concerned about the lack of teacher training in the arts and she is keen to see their teachers given the opportunity to further their learning in this area.

“The Creative in Schools project has provided our staff some much needed professional development,” says Dagmar. 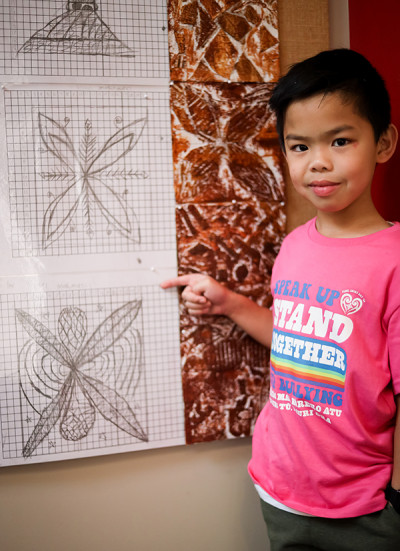 Julio enjoyed being part of the Creatives in Schools project at Sylvia Park School.

“Their capacity within the arts is now much richer for having Alexis in those classrooms. I think they've got more of an understanding and an appreciation for what's involved, from an idea to an outcome,”

The creative process also allowed the children to explore values and tikanga. Alexis says a strong sense of manaakitanga developed as the project progressed.

Garden to Table at Haumoana School

Haumoana School in Hawke’s Bay has truly embraced the concept of Garden to Table.

A NASA Scientist for a Day writing competition for Years 7-10 students is now open for entries.

Garden to Table at Haumoana School

Haumoana School in Hawke’s Bay has truly embraced the concept of Garden to Table. Read more

A NASA Scientist for a Day writing competition for Years 7-10 students is now open for entries.  Read more

Recognising and Responding to Grooming-WEBINAR