Children from Christchurch's Bromley School created a prototype Samoan language app to plug a need in their school and wider community – but the learning that took place from the project has exceeded all expectations. 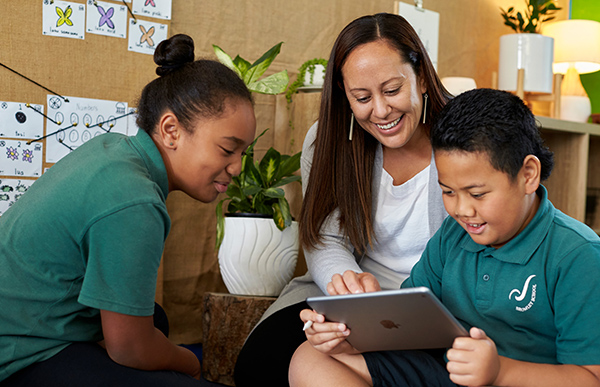 Students Amelia and Jeremiah worked with teacher Mele Togiaso to help them find a way to continue their Samoan lessons.

Amelia, Azariah, Leonie and Jeremiah are all smiles during our chat on Zoom, as they describe what it was like to create a prototype Samoan language app from scratch.

“I feel really proud that we made our own app,” says Amelia, “We worked together as a team.”

The Year 5 and 6 students are amped about having their work featured during Samoan Language Week. And they aren’t at all fazed about being interviewed. After all, their app has caught the media’s attention, with a story on Newshub(external link) appearing earlier this year.

The idea for creating an app was sparked by the departure of the school’s Samoan language teacher.

Teacher Mele Togiaso agreed and with her class, she began the search for solutions.

After looking at the existing Samoan language resources on offer, they decided there was a need for a fun and easy-to-use app that could help students and the wider community learn Samoan.

So they embarked on a journey to create a prototype app called ‘Let’s Learn Samoan’.

“They wanted to include a gaming aspect to the app because they thought it was a really fun way to learn,” says Mele.

“They also drew inspiration from some of the beautiful print resources they looked at. We had a lot of different artefacts that helped them draw in aspects of their culture.”

“As much as we could, we wanted to ensure the language was accurate, so we had to draw on the strengths and expertise of our community, involving them in the process. 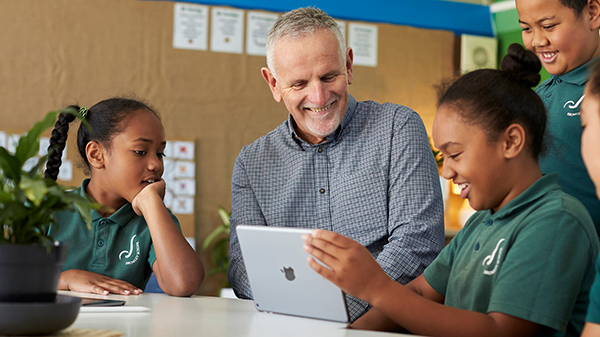 “Our original goal was to make a difference in our community and solve an authentic problem that we noticed,” says Mele.

But principal Scot Kinley says the project has morphed into something much bigger than its original goal.

Scot, a self-professed lover of quotes, paraphrases Albert Einstein to help explain his school’s philosophy. “Einstein said, ‘Imagination is more important than knowledge, because imagination tells knowledge what to do.’ From our school’s point of view, we’re looking at that balance of knowledge, skills, imagination and creativity.”

Mele says the learning that took place through the process extended well beyond the digital aspects.

“There was a lot of learning going on in terms of dispositions and other types of skills. They had to learn communication and cooperative skills.”

Mele says developing the prototype also involved a lot of planning in the initial stages as they worked to create a simple wire frame of the app prototype.

“We articulated a clear vision for the user experience so that when we got to creating the app, they knew how they wanted it to look and function.”

Problem-solving was big part as well.

“We came across bugs as we were creating the prototype – I wasn’t too sure how to fix them, but as a team we came up with solutions,” says Mele.

Scot says it is important for children to see their teachers embrace the same curiosity in their learning that they as students are encouraged to do.

Mele agrees that learning alongside the children was an important aspect of this project.

“I supported the children to learn basic app prototyping development skills and helped them to find solutions to challenges they came across throughout the process.

“I am inspired and supported by colleagues and leadership to grow my own interests and talents,” says Mele.

As for ‘what next?’, Scot says they’re reflecting on what they can learn from the project in terms of developing teaching practice and creating independent learners.

“This has created more opportunities than we can cope with! We’ve had to grow our own capacity.”

And as for the app itself, after Apple showcased it on their Apple Newsroom(external link), the students are hopeful that their prototype might one day feature on the app store so that it might be used by anyone. 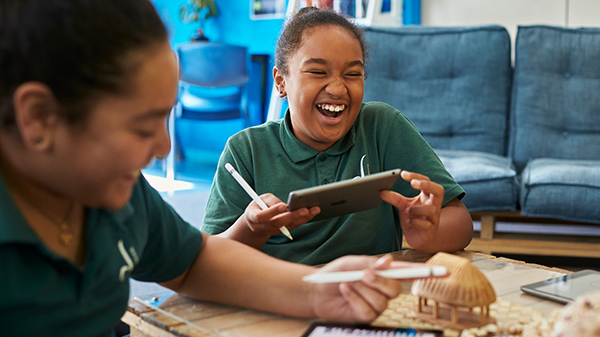 Creativity flourishing: Amelia and Leonie are all smiles and laughter as they work together to refine the app, and fix bugs.

With the first Pacific Language Weeks of 2022 kicking off this month, Education Gazette catches up with Katherine Matamua, leader of Ulingaholo

Cultural pride broadcast beyond the stage

Covid-19 settings meant ASB Polyfest 2022 operated in a different way this year, with no crowds and no stalls, but that didn’t stop families and supporters

With the first Pacific Language Weeks of 2022 kicking off this month, Education Gazette catches up with Katherine Matamua, leader of Ulingaholo Read more

Cultural pride broadcast beyond the stage

Covid-19 settings meant ASB Polyfest 2022 operated in a different way this year, with no crowds and no stalls, but that didn’t stop families and supporters Read more

Learn a language online in 2023 - French, Spanish, German or Afrikaans