Students at a small school on the Kāpiti Coast are so passionate about climate action, they took their concerns to their district council to champion change – supported by kaiako who are creating powerful agentic learning experiences. 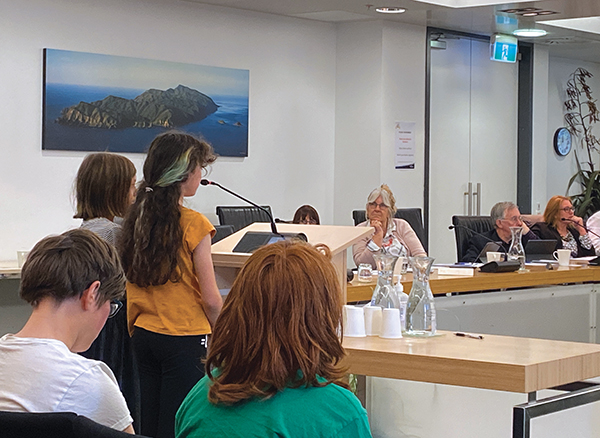 Year 7 student Aneke and her peers speak to the Kāpiti Coast District Council about the region’s environmental footprint.

Paekākāriki School in the Kāpiti Coast prides itself on being the ‘home of the barefoot learner, kainga o ngā ākonga māhorahora’. It is this connection to Papatūānuku and te taiao that drives their engagement with climate change education and empowers student agency – which transcends the school grounds, all the way to the district leadership table.

Education Gazette visits the small village school to kōrero with deputy principal Rachel McMullen and Year 7 student Aneke, who is this year’s Fred Hollows NZ Junior Ambassador for her impassioned speech to the local council about the region’s environmental footprint.

Rachel nominated Aneke for the Fred Hollows NZ award, saying she isn’t afraid to speak out or stand up for what is right.

“Aneke is passionate about encouraging and supporting sustainable practices. This involves connecting with others in our community to learn about local environmental issues and actions that students can take to address these.”

Even while interviewing Aneke, Rachel’s eyes are alight with pride.

“She’s really articulate. She just totally nailed it. It was really good watching the grown-ups’ faces where they sort of just went, ‘ooh’. At her age, I don’t know that I would have had the gumption to do that.”

Aneke’s success is well in line with the school’s focus on environmental responsibility and climate change education.

Paekākāriki strives to give ākonga experiences that will give them the skills and knowledge to step out and make a positive difference in this world, with education practices that emphasise creating independent learners.

Rachel explains it was about five years ago that the school joined up with EMR (Experiencing Marine Reserves) to investigate environmental action. After snorkelling in the reserves, students then created action projects, and that became embedded in school culture.

Once a week, the school has a schoolwide day-long programme – underpinned by te ao Māori concepts of rongoā, maramataka, Te Whare Tapa Whā and Te Whāriki. Ākonga rotate through māra kai (spending time in the edible garden), kauta kai and kindness (cooking and sharing of kai for manaakitanga), rongoā and raranga (learning holistically about the native plants, their uses and the tikanga surrounding them).

“We have passion projects, and often the students will turn to something environmental, because it’s part of their learning every day. They know their villages/local areas really well, and they are passionate about making sure it’s kept nice and clean and safe.”

Rachel says many of their initiatives and programmes are often student instigated.

“They feel pretty confident to come to us with ideas and we’ll go through the ‘well what could we do about that?’ They will have an idea and then we’ll support them in some way or get a local expert in. They’re pretty amazing children.”

Rachel says one of the big drivers for agentic learning at Paekākāriki is who their students will be, and the difference they might make in the world when they go on to secondary school and beyond. 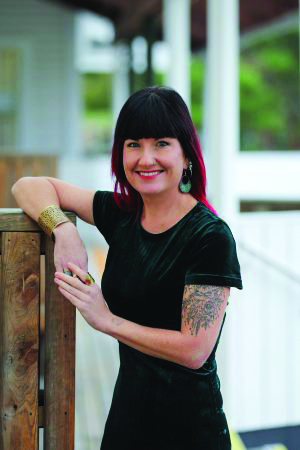 “We find that if students are enabled to be agentic learners, to have choice and voice, to approach the adults with something they are passionate about, then their learning is deeper. It’s an authentic way of learning, and a reason for learning something, as opposed to being told top-down, ‘we think this is important’.”

Rachel explains that agentic learning or student agency is really about ākonga identifying a cause they are interested in or passionate about, finding a way to problem-solve that, and having someone (kaiako or local experts) to support them.

“So often I see people give it a go, but they don’t awhi the students well enough, and it kind of falls over. But there’s learning in that, and it’s important to let children try and figure it out at the same time.”

Rachel says it’s all about providing the opportunities and scaffolding students through.

“Aneke was really capable of rising to the challenge, and there will be other students that need a little bit more support which is absolutely fine. But everyone has the foundation of agency here. By providing tiered levels of support, students are able to be agentic in their own ways. Whether it’s being one of our recognised leaders, or being a leader from behind, or beside, or supporting their friends who are leaders. It all stems from opportunity.

“It’s about thinking, ‘What sort of adults do we want our children to be? What sorts of jobs do we want them to have at the end of it? How do we want them to manage themselves independently?’ All those types of things go into our decision making, supported largely by our local curriculum that had buy-in from the whole community.

“That’s where we see the real magic. When you see what students do under their own steam, they identify the problems, and then they ask for help. It’s amazing.”

An example of this is seen with former students like Sophie Handford, who is the local ward councillor for Paekākāriki and ex-student of both Paekākāriki School and Kāpiti College.

Rachel says Sophie was in leadership positions throughout her schooling, and now she is in council, she has come back to the school to support and empower this next generation as local citizens.

“The students heard that there was going to be an opportunity for adults, largely, to go to council and present their thoughts. And they were the ones that said, ‘Well why can’t we go? We have ideas. Can we go?’” explains Rachel.

Kaiako Jess Hortop organised for whoever was interested to gather their ideas, group themselves into key themes and go to council to speak. Rachel adds that ākonga had absolutely no adult input, and that kaiako were there as support.

“They decided that they wanted to end their session with a waiata, which was amazing. It’s part of our kaupapa, it’s something that we do. That’s part of what it means to be a Paekākāriki barefoot learner, is that we have strong roots in te ao Māori as well.”

Ākonga went on to raise concerns about insufficient public transport, the need for a larger, stricter marine reserve and wanting to see action to back up the climate emergency declaration.

When the opportunity to talk to the council about environmental issues arose, Aneke says her hand shot right up.

“I love talking about climate change and how we can solve stuff like that. After deciding what I would speak about, jotting down some notes, it was just a matter of going and actually speaking.” 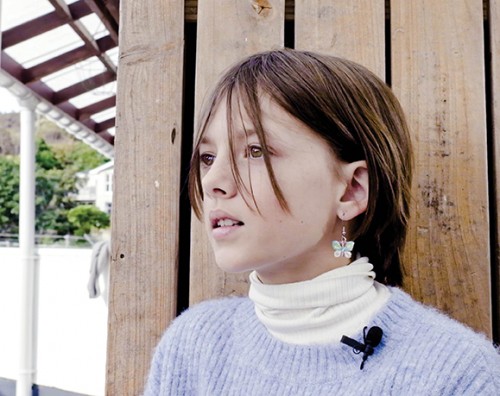 Aneke spoke about the longer-term impact of global warming on her generation, particularly the impact of plastic packaging and single-use plastics, challenging the mayor to approach companies to stop plastic packaging rather than organising more bins.

“If I’m walking to the dairy, say with my friends, so much rubbish is just in the gutter. I do try and pick up as much as possible, but my hands get full. Nobody puts stuff in all these bins that are being put out. I just find it annoying. In my opinion, putting out more bins just encourages more rubbish.”

When asked how she felt before her speech, Aneke says she did feel really nervous.

“I managed to get a friend to come and stand with me. It is pretty nerve-wracking speaking out against the mayor when he’s right there in front of you. In preparation, I did write a short script. But I didn’t practise really.”

An inspiration to others

While much of her passion for the environment has grown at school, Aneke says she also learned a lot on social media, including on YouTube. She is also very quick to respond when asked who her role model is.

“Greta Thunberg. Absolutely Greta Thunberg. She is just such a role model, the way she is so confident to speak out on all these issues. I aspire to be like Greta.”

Aneke herself is also a source of inspiration for her own friends and family, who she says are getting better at picking up rubbish. 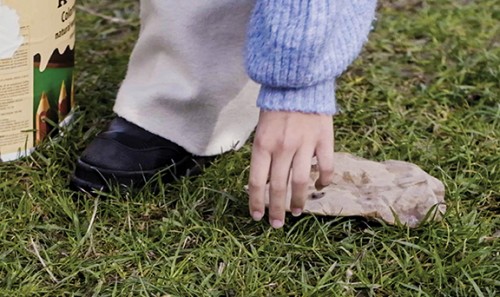 Aneke says "So much rubbish is just in the gutter. I do try and pick up as much as possible, but my hands get full."

“After speaking with council and being awarded the Fred Hollows award, I feel like many of my friends and family were inspired to take steps towards climate action and helping protect the planet,” she says.

Aneke’s passion for the environment continues, with a newfound interest in the ocean and marine life.

“I just find it so sad and devastating that all these sea creatures are dying from eating plastic. [The ocean] is definitely a big thing for me. A couple of months ago there were lots of big gusts of wind, and you could see the rubbish going into the ocean. It was going too fast and high for me to grab it. It’s devastating when things like that happen, and I can’t do anything about it.”

There are things that can be done, though, says Aneke. Her advice to other young people is to speak up.

“It doesn’t matter if you’re shy. If you have something to say, say it. It’s not just going to get out there unless you speak up. The problem is not going to solve itself. We need people to take action.”

Continuing the kōrero on inspiration, Rachel says she is always so inspired by her students.

“That’s why I love my job. I learn alongside them. I think we all remember being that age, and I think most of us can confidently say we would not have been able to do what they did. But that’s part of our kaupapa. That’s why we provide opportunities for learning, and have that trust and relationship between students, the adults, the community, and whānau.

“I just bring it back to, ‘What kind of adults do we want at the end of the day?’” 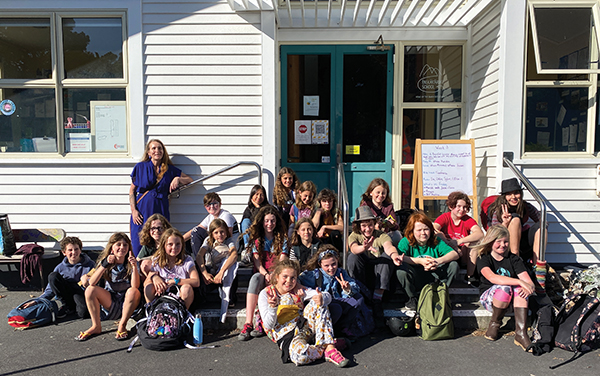 We ask Rachel what her advice would be to other educators on how to leverage student agency, based on her experience.

“Try things and don’t be afraid to fail, or to notice that maybe it didn’t work for some students.

“The thing about student agency is, it takes time to develop. You can’t just throw an option at a child and expect them to know what to do with it. It’s too much of a deep end, including for you as an adult to help support them.

“Provide small options for students to have choice and voice and build it from there. And don’t be afraid to ask other adults for help. The more adults on the ground and the more adults you have to support the children, the deeper you can go.”