“It’s not just about free lunches in schools”: the programme that’s making a difference

The Free and Healthy School Lunches Programme is making a positive difference for learners and communities of many schools, including Murupara Area School. A Budget 2020 initiative will see the programme expanded to more schools around New Zealand. 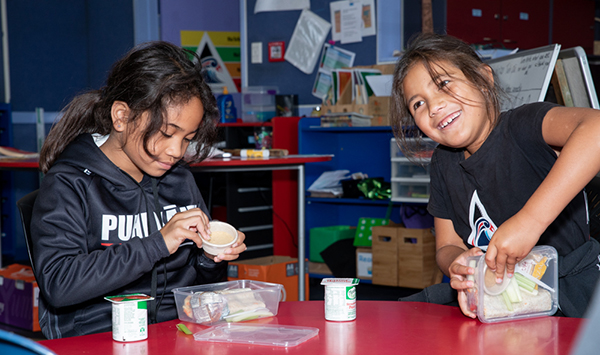 The Free and Healthy School Lunches Programme is set to expand to more schools.

Murupara Area School was one of the first schools in the country to implement the Free and Healthy School Lunches Programme. But they don’t talk about free lunches; the emphasis is firmly on healthy lunches.

“Because it’s for all of our children, not just those who may not have access to enough food all the time,” explains principal Dr Angela Sharples.

“It’s not about poverty. It’s actually about teaching about healthy nutrition. It does meet a need that was already evident around food security, but more than that, it’s about the teaching and learning; it’s about how it sits within our wellbeing programmes.”

Murupara Area School, located in the remote forestry town of Murupara in the central North Island, opened in October 2016 and has made health and wellbeing a firm focus ever since. The school has just under 300 students from Year 1–13.

Consistent access to food for children is an area of concern for the community. The school had various food support initiatives in place already, including KidsCan and Milk in Schools.

After attending a Ministry of Education-led workshop on the school lunches initiative, Angela decided it would align well with Murupara Area School’s existing programmes, particularly the Healthy Active Learning Programme, a key focus for the school.

The school was pleased to be in the first tranche of 59 schools to participate in the two-year pilot programme.

The Free and Healthy School Lunches Programme aims to reduce food insecurity by providing access to a nutritious lunch every day.

“Because we’re a new-build school, all our gardens have been planted to be edible. Nothing is allowed to be planted on the school site that is not edible. So this initiative [healthy school lunches] really aligned with our whole whakapapa about whanaungatanga and manaakitanga and our focus on health,” says Angela. 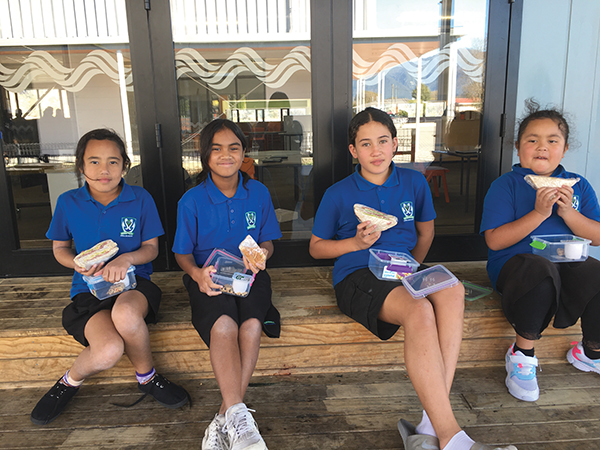 Sistema added its support to the initiative with lunch boxes for the children.

“We wanted to provide employment for our community here so that we maximise the opportunity for everyone, not just the children.”

So rather than contracting a commercial company, Manawa Munchies was established to deliver the service, providing direct employment for three people in the community.

The school took part in food safety training, which included how to work with the Food Control Plan for the School Lunches Programme, developed by the Ministry for Primary Industries.

Toi Te Ora, the public health arm of both Bay of Plenty and Lakes District Health Boards, provided access to a nutritionist to support the development of healthy menus.

The school entered into a positive relationship with Whakatane District Council to use one of their facilities close to the school because the school didn’t have anywhere to prepare the food. If provision of lunches in schools becomes part of New Zealand education culture, Angela says she would love to see wharekai become part of school property, to enable schools to prepare food on site.

And Sistema have also come on board to support the initiative, donating reusable ‘Bento Lunch Boxes’ to the programme. The lunchboxes have individual compartments that cut out the need for single use plastic waste.

“I approached Sistema with the idea, and they decided this was a wonderful thing that they would support nationwide. We wanted to use sustainable options,” says Angela. 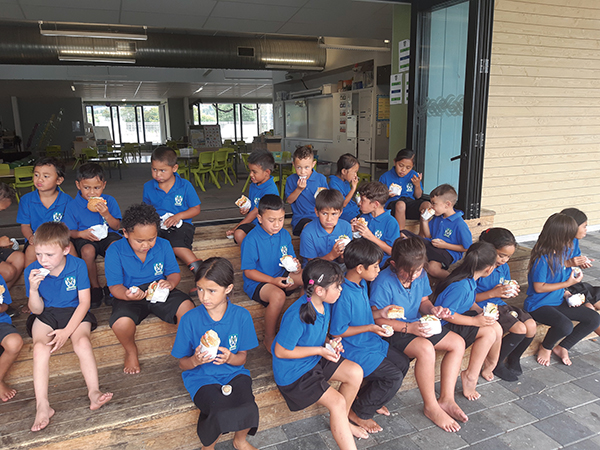 Tamariki at Murupara Area School enjoy their lunch together.

“For the first little while we had some children who didn’t want to eat carrots or tomatoes or whatever it was that they didn’t like – but because we have a very clear policy that if a child doesn’t want to eat something, there’s no fuss made about that.”

“It’s good for them, but it’s also good for the children who didn’t want to try things. No one makes a fuss about it and then in a day or two they’re more likely to think, ‘hmm, if everyone else is eating the tomatoes, I’ll give that a go’.”

While it’s early days for the programme, especially with the interruption of Covid-19, Angela says it has helped to bring the school together.

“We now have routine around eating together. We have karakia and then the children sit to eat before they go and play. Children serve other children so there’s a whole lot of social interaction that’s really positive around the sharing of kai.”

Is it making a difference?

Anecdotally, they are already seeing improvements in behaviour and student engagement.

“Teachers say that students are more settled and more willing to learn. We haven’t seen significant improvements in attendance but we’re not hearing lack of food as a reason for not coming to school. Parents are often embarrassed if their child doesn’t have anything to bring to school.”

But Angela sees the major benefit as the lifelong learning that’s happening around healthy eating.

“It’s about teaching children about healthy eating so that they develop the skills for their own whānau – so that when they’re grown up they know about all these healthy foods, they know how to prepare them, they know the tastes and what goes with what.

“So there’s all that learning and how that sits with healthy body, healthy mind. Then there’s the flow-on benefits to the wider community in terms of providing business opportunities, skills and employment. It’s not just about free lunches in schools.” 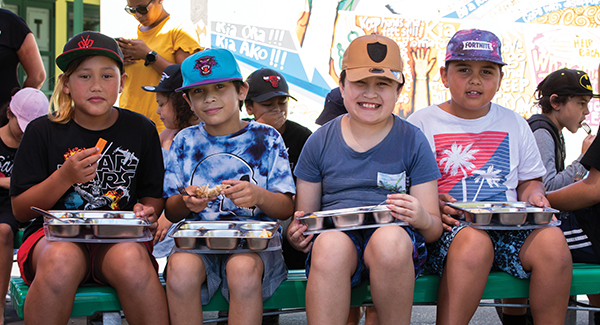 Flaxmere Primary School is part of the School Lunches Programme and tamariki enjoy their kai together.

The Free and Healthy School Lunches Programme currently provides daily lunches to 8,000 children, but an expansion of the programme as announced in Budget 2020 will see around 200,000 students benefit from the initiative.

The programme targets schools facing the greatest socio-economic barriers. At the moment it is targeted mainly at Year 1–8 students, however the expansion will see this rolled out to secondary schools as well.

Expanding the programme is also expected to create around 2,000 jobs in local communities. Schools can decide whether to deliver lunches themselves or outsource to an external supplier. The Ministry of Education is supporting schools with this process as required.

The Budget announcement saw $216.7 million in operating and
$3.9 million in capital expenditure allocated over the next 18 months to fund the expanded programme, which will be rolled out from
term 4 this year.