A research project using data tools and the professional growth cycle (PGC) to observe and record oral language and communication has helped some early learning kaiako respond more effectively and confidently to the language development needs of tamariki. 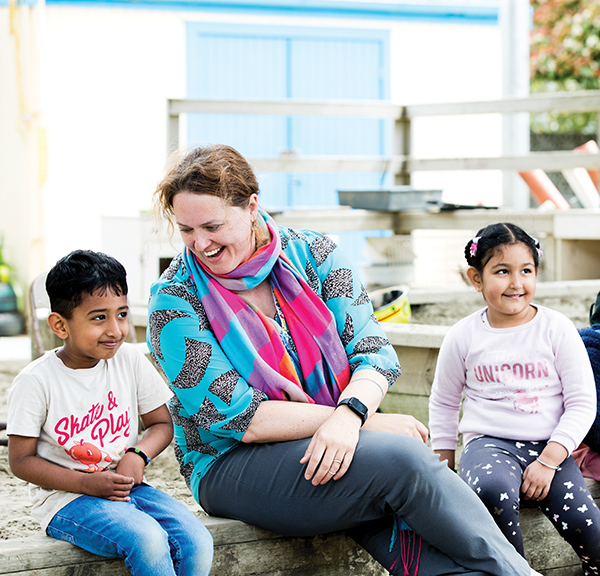 Education Gazette photographer, Adrian Heke's large lense was a topic of conversation for Varkeychan (left) and Nimrat, who are photographed with speech language therapist, Claire Fouhy.

“I wanted to lift the importance and profile of how the teacher interacts and show that it has a significant role to play in children’s language development, wherever that is sitting.”

Claire hoped to shift the narrative by using a data lens so that kaiako gained a better understanding of the importance of targeting oral language skills at a vital stage of development.

“The project was about introducing that data element – what is data and how do we work with data? We don’t need to be afraid of data. Data is a source of information that can help us to be more fine-tuned into how to intentionally plan and teach,” she says.

The year-long project involved four teams from four of HCK’s 20 kindergartens who worked with data tools to enhance teacher inquiry into the Mana Reo (communication) strand of
Te Whāriki. Each team included a teacher researcher trained to lead the team in working with data tools and collecting observation data of children’s language experiences.

“We wanted to ensure that we were noticing their language development and responding with interactive experiences to keep children moving forward as confident, competent communicators,” says Claire, who was project lead.

The project built on the experiences and tools developed in the Data, Knowledge, Action TLRI and TLIF projects (see more on page 9).

The project introduced a new culture of data use to teaching teams. Data tools focused on:

A teacher reflection tool looked at 28 teaching practices supportive of children’s language development. Teachers individually rated themselves on a growth scale from ‘I’ve never heard of this before’ to ‘I’m really confident and I can train other people and support them to grow’. 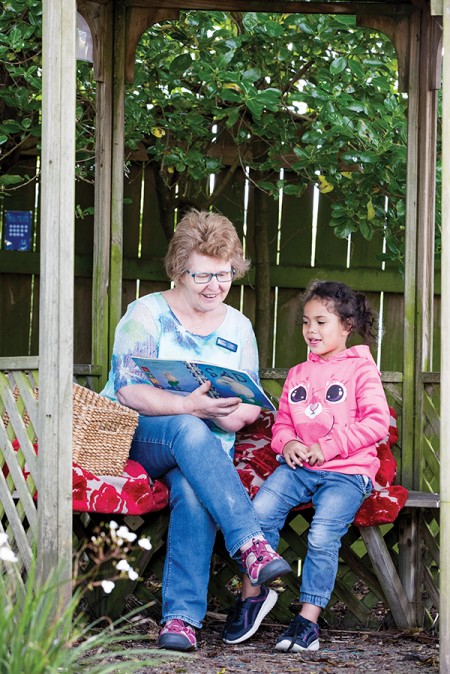 Lyn and Hunter share a book in the ngāhere at Avalon Kindergarten.

The second tool, a child profile questionnaire, prompted teachers to think about things they know about a particular child before coming together and pooling their collective team knowledge.

“Who’s she talking to? How many times did the child initiate an interaction with a peer or teacher and did she get a response or not? Was it a non-verbal initiation, or verbal? If there was a conversation with a teacher, what sort of conversation was it? We collect data, which would be shared with teams,” says Claire.

“Why is this important? The child that initiates lots of interactions is going to be having a lot more practice opportunities with their language skills. It doesn’t mean we want to change a child’s disposition, but it’s about thinking of ways to encourage lots of opportunities to practise oral language,” she adds.

The key goal of the project was to investigate ways to have sustainable shifts in practice, which is why it was embedded into the annual professional growth cycle. The teams engaged in successive cycles of inquiry with the support of the newly trained teacher-researchers to help them gather data.

Throughout the project, teachers reported ‘aha’ moments which saw them engaging in more intentional planning and formative assessment of language and communication skills.

“You think you’ve interacted with a child a lot, but then you look at [the data] and you realise that they are fleeting interactions, the depth maybe is not there or maybe it only happens once during that two-hour period and it just sort of gives you more awareness of what you’re doing, where you’re going and just that whole understanding how quality is the key rather than the quantity,” said one teacher-researcher.

“The child can talk constantly all day, but they might be just talking to people fleetingly without getting that depth, so that’s made me more conscious of really trying to sustain interactions with children.”

The data tools were designed to be adapted and used for each unique context and inquiry. For example, one team pivoted from researching practices around oral language to social and emotional communication skills and language. They developed their own set of teaching practices as the data highlighted a need for more intentional coaching of children on the language used with each other in peer relationships. 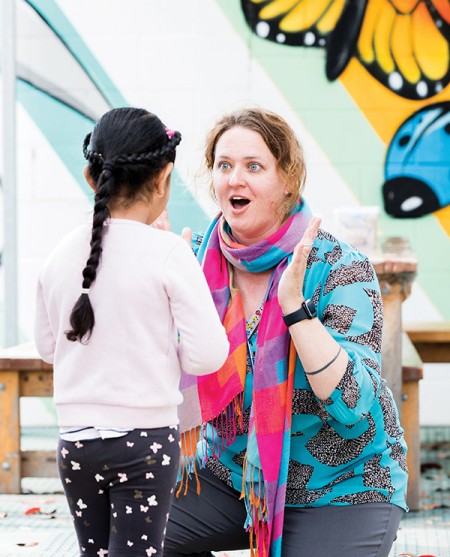 Hutt City Kindergartens was able to engage in the project thanks to a grant from HealthCarePlus and their Grants for Good scheme.

“Teams reflecting collectively with time, support and guidance is hugely valuable. It’s a real challenge to find the time to do this, but it’s worth it.

“The funding from HealthCarePlus provided the opportunity and space to engage with expertise. This made an enormous difference to rolling out a successful process of professional learning and development in a priority area of learning for all children, and especially our most vulnerable children,” says Claire.

“Being an intentional teacher includes collecting data and information and analysing it. It’s an important piece of the puzzle for the team to use to decide what to do next,” says Claire.

Using data tools to actively engage teachers in reflection on their role in the critical development of a child’s oral language, has resulted in teachable moments through child-led play being used in the moment and intentionally planned for in advance.

“Teachers are noticing, recognising and responding to oral language learning opportunities more consistently and integrating communication goals intentionally and holistically for all children; including those with strong language skills who need greater stretch to progress, as well as those whose language development shows signs of delay or difficulty.”

The project has given the HCK valuable data about time investments that offer the greatest value for children’s learning outcomes.

“The use of new tools and the supported process of inquiry lifted the quality of teams’ observations and reflections, focused their shared communication, and expanded their capacity to respond more confidently with teaching practices tailored to the language development stage of the individual child.

“Now that we have engaged in this process with a high level of support, we have the confidence to develop and adapt what we have learned to create time and space for further professional growth across our pool of 100 teachers and 1,000 tamariki,” Claire concludes.

Avalon Kindergarten kaiako Lyn Guild was one of the teacher-researchers involved in the data project. With more than 20 years as a kaiako under her belt, she describes the experience as “amazing” even though initially she had her doubts.

“I thought I was too old to learn something new, I didn’t know anything about data collection, and I’m too busy – how much non-contact time was it going to take?

“But it was exciting for me to learn new things such as the new technology and to be a researcher. It pushed me out of my comfort zone, but it’s given me a lot more insight into how effective we can be. I think each of the teacher-researchers learned a lot about themselves and their understanding.

“Since being involved I feel like I am more analytical about what is happening with children, and I feel there are so many nuances in what happens in an interaction. There are a lot of steps involved in learning to have a conversation with somebody.”

For the teacher reflection tool, each teacher did their reflection individually and then had a team discussion.

“It was quite a vulnerable process because you had to talk about your [perceived] ‘lack’. But it was really affirming because colleagues would say ‘no, no, I saw you do this, this and this under that category’.”

The child language profile tool also involved teamwork with kaiako doing individual profiles for a child, then collating the data.

“It was a collaboration and collation of information which then gave us a fuller picture. It brought to the top where a child may need a little support in their language development, or it provided us with information to say to whānau, ‘we’ve noticed this, what have you noticed?’ It’s evidence-based and you can actually start a plan from a stronger place.” 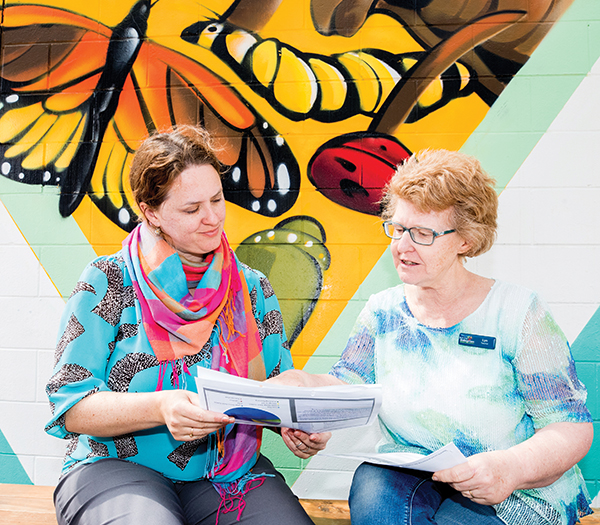 Having the opportunity to be an observer (teacher-researcher) in a different kindergarten was an opportunity not often offered to kaiako and Lyn found the data gathering and coding in the structured intentional observations allowed her to break down interactions in a nuanced way.

Some of the data was collected using tablet-based software and put into Excel to produce graphs that showed what a child was doing, types of social engagement, number of times they initiated interactions and the kinds of interactions they had with kaiako.

“With the coding and pictorial representation, if for example you can see a child is spending a lot of time by themselves, you start to ask why. You start to look at who is friends with that child? Is the child doing a range of activities at the kindergarten? You start to be quite analytical about what the child is doing.”

Building on the skills she learned as a teacher-researcher, Lyn was able to do an observation on a child at her own kindergarten as his communication and oral language development was of concern.

“I knew the child but when I had two hours to watch, within an hour and a bit I went ‘aha!’. The child had never had much experience in initiating interactions. He would bring a toy, which most kindergarten teachers discourage as they don’t have time to look for lost toys. But I realised he was desperate to interact with us and the other children but wasn’t confident enough. It was a non-verbal way of initiating an interaction.

“Once we realised that it was partly a comfort thing and it gave him something to talk about, we engaged in conversations with him about it. He became a real chatterbox, and he was a lot quicker at joining in with things. It helped us answer questions about what this environment wasn’t providing and what he wasn’t comfortable with.”

All teachers involved in the project learned how important it is to have sustained conversations with tamariki.

“We think we have a language-rich environment because we talk all the time, but actually it’s breaking it down and analysing what we are doing. It’s made us aware of being present to have those conversations. Those sustained ‘serve and return’ conversations are vital and as you’re building it up, they become more competent.”

For an overview of the Data, Knowledge, Action process, read Building a data culture to enhance quality teaching and learning available at NZCER.org.nz(external link)

Leaders of the Tauranga Peninsula Kāhui Ako have pulled out the stops to support their early learning centres; mahi that is informing best practice transitions

Leaders of the Tauranga Peninsula Kāhui Ako have pulled out the stops to support their early learning centres; mahi that is informing best practice transitions Read more