Using the arts to express their understanding of Matariki, Clifton Terrace Model School created a schoolwide experience empowering ākonga and teachers – Matariki, Guided by the Stars. 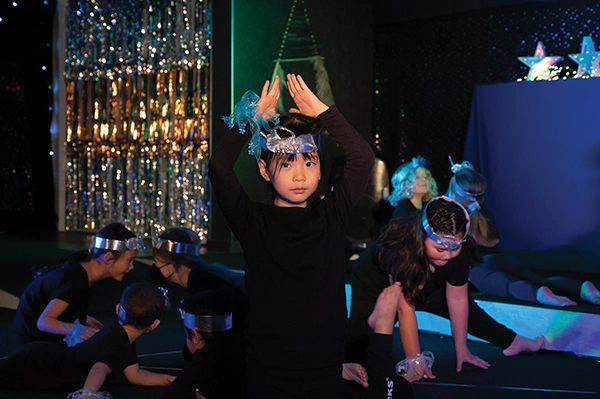 Each student was able to shine

Bright lights rise to show a group of children ready to perform, bustling with excitement to show the result of months of hard mahi – they are ready to be stars.

Clifton Terrace Model School has a strong arts focus, considering it part of their local curriculum to encompass not just the history of Te Whanganui-a-Tara Wellington but also its vibrant culture.

Principal Jenny Austin says one of the school’s philosophies is accessing what Wellington offers to extend the classroom to learning activities in the city.

“As such, we have quite strong connections with different facilitators across Wellington. So, we looked at the Creatives in Schools programme as a way of enhancing what we were already doing within our local curriculum.”

Their idea for the performance originated from a navigation inquiry through Aotearoa New Zealand’s histories curriculum content last year. The project had looked at how Polynesian navigators used the stars to navigate, and it was a natural progression to then look at how the stars also mark significant events such as Matariki. Since this was the first year of Matariki as a national holiday there was special significance.

To ensure authenticity in the project, the school looked to the work of Dr Rangi Mātāmua and sought guidance from Hemi Prime, their kapa haka tutor. 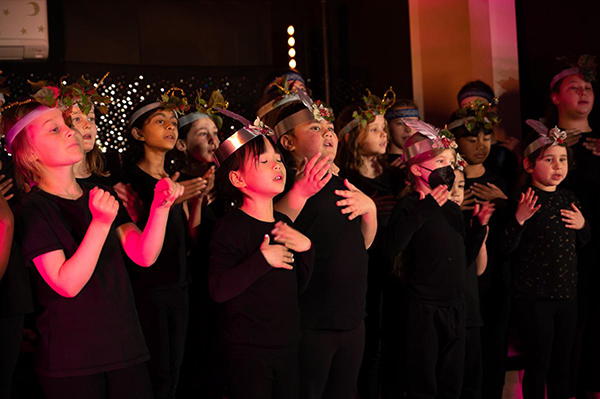 After being successful in obtaining Creatives in Schools funding in 2022, the school enlisted the help of dance educator Liz Melchior to facilitate the dance segments. For the drama facilitator, they already had a connection with Mel Dodge as lead creative, because of her involvement with the Primarily Playing with Shakespeare programme.

This skill of being able to work on aspects separately then bring them together as a whole performance was needed for the Matariki project. Each home group in the school was allocated a whetū to explore independently and the school did not come together until just prior to the performance.

Each of the creatives used their experience and expertise to guide the ākonga through a series of workshops in terms 1 and 2.

Liz worked conceptually with ākonga during term 1 to introduce basic dance elements and terminology, such as locomotive and non-locomotive movement. At the same time the ākonga learnt about the significance of Matariki. In term 2, they combined the learning to create the performance.

“The children were very quickly able to embody their learning about Matariki through dance. As they already knew how to create dance, we didn't have to teach any skills from scratch. We could combine the skills and knowledge they had developed to make it a seamless, almost stress-free process,” says Liz.

The final production is splendid. The ākonga give their own energy to each aspect of the story, and the dances provide a vivid interpretation of Te Iwa o Matariki – the Nine Stars of Matariki. The performance space would daunt even a seasoned performer as it was created by combining two classrooms – meaning the performers were up close to their audience.

The project left a lasting impression on the ākonga. Carla Macleod, senior teacher, recalls a group of ākonga talking together the day after the final performance.

“One of them was pretending to be the dance teacher and one was the drama teacher and they were creating their own little scenario. They were thinking about costumes and the movements that they were going to use, and they were very keen to share their performance with an audience. I just thought it was brilliant – it’s become part of who they are, and they totally understood the process.”

Mel also has her favourite memory as to how the production benefitted ākonga.

“There were lots of ākonga who were a little bit unsure or who were nervous. This one boy was very nervous, but he ended up really embracing the whole performance and we ended up creating a character that was just right for him and really allowed him to shine.”

As well as the learning opportunities of the performance, the school assembled an integrated learning experience which covered curriculum areas such as the arts, learning languages and social sciences. Many key competencies were also explored, such as Participating and Contributing, Relating to Others, and Thinking.

This experience also explored Te Ao Māori and the significance of Matariki, including traditional practices such as whāngai hau and maramataka.

Whānau were also involved when they were invited to join the school in visiting the local planetarium to view the Dawn Rising show which is all about the rising of Matariki. 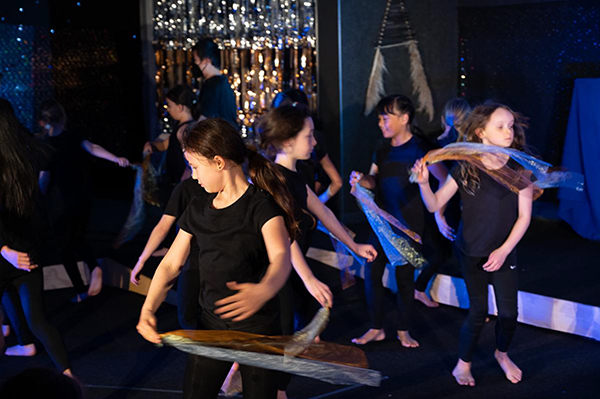 Students used dance to represent elements such as the wind

A sense of ownership for ākonga

Ākonga voice was integral in developing the script for the show.

The production was largely ākonga-led with the dances created with a lot of input from the ākonga.

“It was important that the children had a sense of ownership of their work, and by accepting and developing their movement ideas in the way that we did, they really owned the dance,” explains Liz.

Their performance included many other investigations and discussions, such as reflecting on their own personal experience, learning te reo Māori, managing themselves and relating to their peers. 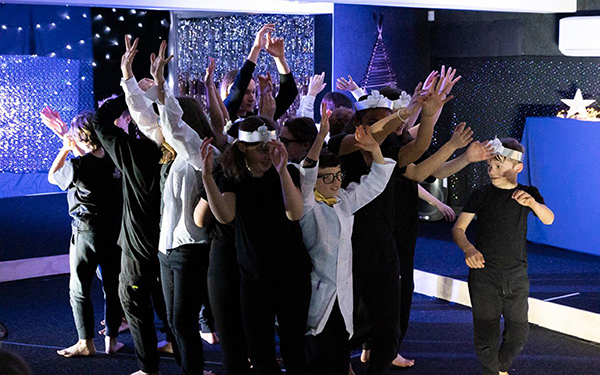 The whole school came together to perform

The teachers also benefited from the experience. They were able to participate in the classes and learn from what the creatives were doing, in order to carry on with the project in between visits.

“Towards the end of the process, the teachers were rehearsing every day. They were running lines, running the scenes, running the choreography. So, they really became directors as well. They were a very intrinsic part of the creative process and I think that's why it worked so well,” says Mel.

The teachers were given guidance by the creatives to help them work with the ākonga, so the experience acted as a valuable form of PLD.

Jenny, Carla, Liz and Mel view collaboration as a major key to achieving a successful project like this. They also recognise how a project such as this contributes to wellbeing.

“We had come out of Covid and the staff were rebuilding their teaching practice, because we had been online for so long. It was so exciting to be back collaborating, working on a project,” says Jenny.

“We were uplifted by working together on something that was really memorable and we felt that it was important to be doing this not only for the staff, not only for our community, but for our ākonga.”

Live Online Course: Working with our Children/Tamariki with Autism