A sustainably built new teaching block at Nelson’s Waimea College has met an urgent need for more classrooms, provided a flexible learning environment for the mathematics department and sequestered more than 270 tonnes of CO2e.

Waimea College is in Richmond, a satellite suburb of Nelson, where demand for housing has seen the development of hundreds of homes over the past decade. Roll growth at Waimea College, currently at 1,600+, resulted in a deficit of 13 teaching spaces, which meant that at times, some classes were taught in the staff room and school library. 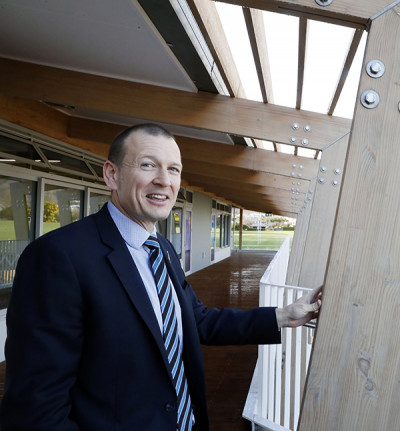 Scott Haines is proud that nearly all of the materials and services required for the new build come from within a 100km radius of Waimea College. Photo credit: Stuff Ltd.

Most of the school’s classroom stock is more than 60 years old and configured in single cell classrooms.

The roll-growth project is being delivered by the Ministry of Education’s Education Infrastructure Service team. In preparation, Waimea College embarked on a process to develop a vision for the future of teaching and learning at the college, alongside the Ministry team.

Through this process, the college recognised that the future would need sustainable and flexible building solutions. The college also recognised the significance of the local construction workforce to their community and were keen to support local businesses where possible.

Key members of the school’s staff visited various schools around Aotearoa, which had been identified as having strong teaching and learning spaces.

The team from Waimea College was very interested in the concept of flexible learning environments.

“One of the key takeaway messages from his report was around flexibility and that we shouldn’t lock ourselves down into any one type of pedagogy. These buildings will be around long after we have gone and we need to be mindful about who will inherit these places and make sure that they are as flexible as possible,” explains Scott.

“That was one of the things that really drove us and we found a number of schools that had implemented that well. We ‘burgled and borrowed’ from all around the country for ideas and then we threw our own value set and priorities on top of that.” 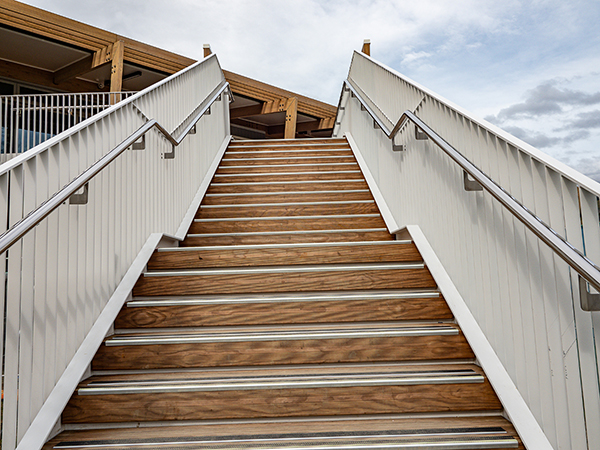 Nearly all of the materials used in Waimea College’s new mathematics block (which includes a specialist earth sciences lab) were sourced from within 100 kilometres of the school. Laminated veneer lumber (LVL), an engineered wood product is manufactured at Nelson Pine Ltd from locally grown pinus radiata. It’s generally used for lintels, beams, mid-floors and roofs. With the exception of the foundation, there is no structural steel or concrete in this new build.

Reducing the carbon footprint of infrastructure aligns with the Government policy statements on climate change and sustainability. The Ministry’s design guidelines incentivise designers to use “sustainable and non-harmful material and resource use, and reduce emissions to the atmosphere” – these principles are aligned with the school’s vision.

“We had the sustainability focus right from the get-go: early in the piece, timber became something we wanted to build with. You can stand at the top of the new R Block on the wooden stairs with the LVL beams around you and look out to Nelson Pine where the LVL is made, which is pretty cool,” says Scott.

“By using timber rather than steel and concrete, the build saved 270 tonnes of carbon dioxide being discharged into the environment – the equivalent of 110,000 school vehicle drops offs with a 15km round trip.

“That calculation is just based on the nature of the products in the building and doesn’t include the saving from using locally sourced products rather than products that have been shipped all around the place,” he says. 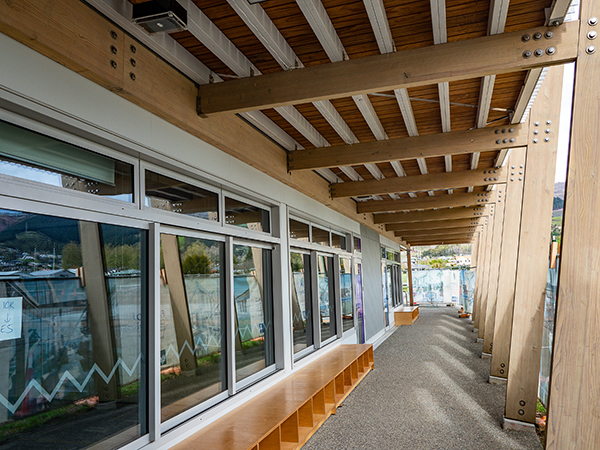 One of the school’s core values is a sense of belonging and an objective of the building project was to support the local community.

“We are a local community school; we market ourselves as such and we wanted mums and dads of our students to be involved in all aspects of the project: design, build and sourcing of products. The story I have told the students is, ‘Your mums and dads will have made the LVL at the local timber mill, will have grown and milled that timber, been the truck drivers bringing that timber to the yards, or been the builders and contractors’.

“We’re part of a community and we take that responsibility really seriously. We know that economically times are tough right now and have been, and will continue to be for some time. This is a nearly $5 million project and we know that decisions we make can have tangible benefits for local communities if we do it right. Parents invest in us as a school and we wanted to invest back in our families and our local community,” he says.

Discussions were held with the architects about the pros and cons of ‘operable walls’ that fold back to make bigger teaching spaces. Scott was pleased when the Ministry’s South Island property manager visited the school a few weeks after R Block opened at the beginning of term 3 and asked if the operable walls were being used.

“I replied: ‘Well, sometimes I visit and the wall is open and others time I visit and it’s closed’, says Scott.

“He said, ‘That’s perfect, that tells us that you are using the building as a flexible space and getting the maximum value out of it. If it sat open all the time, we would question why it’s there; if it was closed all the time, we would ask why you didn’t just put a wall there. But the fact that it’s opening and closing depending on the needs of the teacher and what’s going on in the classroom tells you that you are already starting to embrace that flexible learning pedagogy’.” 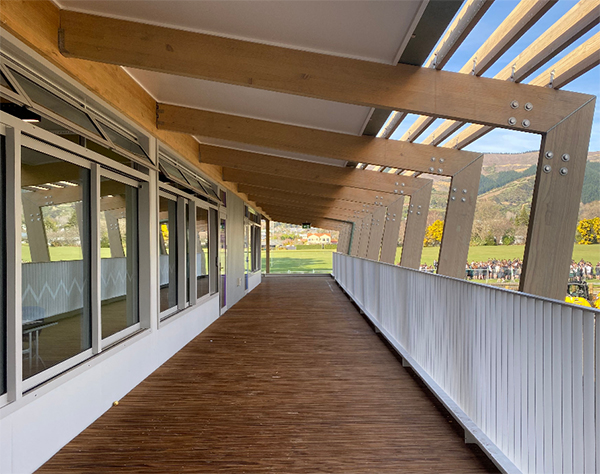 Most of the new building is made from locally grown pine and locally manufactured engineered timber products.

With Stage 1 of the roll growth project – R block – now complete, Stage 2 is now underway and will increase the capacity of the college for projected roll growth. The new English and Media Studies block with a dedicated computer lab is due to open by the start of term 3, 2021.

Staff are enjoying the new facility and starting to evolve their practice accordingly.

“Where we will see the tension over time is that we will see a variation in practice between the areas we can use more flexibly and engage with better than the more traditional single cell classrooms where we can’t.

“We’ve only had the building open for a term so we are just starting to dip our toe into the water of what the possibilities look like. Years and years of practice in one way takes some time to undo. I feel confident that in a year’s time you will see our practice has evolved even further,” says Scott.

Find out more about other structural timber projects in Nelson:

Along with the new two-storey mathematics block, Scott employed a new HoD maths, Richard Keys, who was involved in the design of the building from the start.

“Mathematics is not always an area which is open to flexible learning environments and creative curriculum; however, we went out of our way to recruit an HoD who broke that mould.

“What a great opportunity to provide a new teaching space to an HoD who is trying to create new ways of doing things and really breathe some modern flavour into their curriculum,” says Scott.

The input of Richard and key members of the mathematics department was critically important and provided them with a unique opportunity to contribute to the design of the building in a way that supported the pedagogy they wanted to roll out.

“We were looking for the opportunity for teachers/students to collaborate when they can. A number of classrooms open up into other classrooms and we have tried to structure our timetable in such a way so that when there are classes that are capable of co-teaching, we can timetable them next to each other and open those walls up and do some team teaching,” says Scott.

A traditional maths classroom generally consists of students working at individual desks and Richard says there’s much more of a buzz of engagement and improved buy-in from some of the students who used to fly under the radar in the new spaces.

“One small thing that I hadn’t planned for is that the orientation of the room changes things. Most classrooms tend to be longer than they are wide, but these are wider than they are long. It has changed the feel of the classroom because the class is gathered around you. Everyone is an active learner and part of the group. The layout somehow encourages students to try something new,” he says.

Feedback from teachers and students has been very positive and staff have been seeking opportunities to open up the double spaces and find different ways to use them and present things differently.

“Rather than being stuck at the front of the room, teachers are freed up to roam and provide help when and where it’s needed. The learning can be more active and more inclusive. What we’re seeing is more engaged students, and teachers who are bouncing ideas off each other and learning together,” says Richard.

The flexibility of the environment encouraged the kind of collaborative approach envisaged, with teachers sharing ideas, and working together to implement them, says Richard.

“At any one time, we might have groups of students designing and running experiments, for example using robots or building bridges, while others are using laptops to build mathematical models using the data they have collected. Meanwhile another group is gathered around a whiteboard desk working through a set of problems which require the application of their new knowledge in different contexts,” he says.