Te Rākau Theatre Marae is currently working with the Ōtaki community and Ōtaki College to reinvigorate teachings on Māori history, bringing the past into the future in their production, The Battalion. 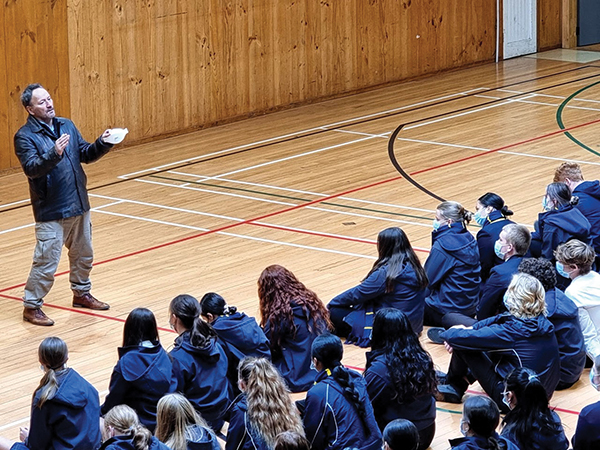 Helen Pearse-Otene and Jim Moriarty founded Te Rākau Hua o Te Wao Tapu Trust and the subsequent theatre company in 1999. They have since provided communities of all kinds with an interactive way to learn about te ao Māori history and the holistic Māori theatre process.

Jim is collaborating with students and staff at Ōtaki College, with assistance from Creatives in Schools funding, to deliver an alternative spin on the ordinary history lesson.

The chosen play, The Battalion, has been in the company’s repertoire for fifteen years, says Jim.

“That’s how long it has been around, but we still think it's relevant. At the core of it is the intergenerational dialogue between kaumātua and young people. Also, inside it is looking at ‘to war or not to war’ – that is still going on, you know with Ukraine, etc. There’s repatriation with whakapapa, insight into how people manage being harmed sexually, there’s that subject matter that's timeless, universal and transferable.”

Ōtaki has a rich Māori history and is the cultural centre of Ngāti Raukawa iwi. The Kāpiti Coast seemed a natural and perfect setting for Jim to bring the theatre company to.

“I whakapapa to Ōtaki through my Ngāti Raukawa side. So, it’s just cool being here.”

Combining aspects of drama, history, music, and physical education has allowed students and community members to engage with their whakapapa in a way they haven’t before.

The small-town base does not have a lot of drama opportunities for teenagers, explains dance and drama kaiako, Tamsin Dashfield-Speight.

The partnership between Te Rākau Theatre Marae and Ōtaki College has been in the works for many years, even prior to Whaea Tamsin joining teaching staff in 2020.

The staff are thankful the programme has become a reality as it is helping to bridge the gap in the town’s current offerings for drama and the mainstreaming of kaupapa Māori.

Te Rākau embeds kaupapa Māori into their practices. Their working relationships and modes of teaching are guided by principles of Te Tiriti, and this is evident in their methods to garner connection and community within groups they work with.

The project is five weeks in and a strong sense of whanaungatanga has already formed within the group – though this was not always the case.

The participants span varying year levels and there are even individuals from outside of the college. The unfamiliar environment and relations prompted some dubiousness among members, but the theatre practitioners swiftly tackled this obstacle.

Year 9 student Isla talks about how they had to face these anxieties head on.

“We weren't allowed to partner up with someone we knew for certain activities... I think it just got everyone comfortable and used to everyone’s presence.”

A few members explained a warm-up activity where they had to ‘act out’ their partner’s name. The silliness and ambiguity of the task allowed them to loosen up and realise they were all there for the same reason, explains Year 10 student Taleah.

“It was pretty cool that you could actually connect with that person because you both like the same thing.”

The Battalion is multifaceted in its plot and delivery. The rangatahi have had to engage with sensitive content as well as learn various waiata and kapa haka. Many of those involved are first timers in the performing arts realm. At times this has proved challenging, but they have stepped up to the stage and are eager to put on a show.

“I was dragged along by my sister, and then my sister ended up not doing it... I’ve never done it [theatre] before but it’s definitely something I'd like to do again. It's quite a lot of fun and it gets you out of your comfort zone,” says Isla.

Over the last five Sundays of rehearsals, Jim and the other practitioners have witnessed the participants grow in confidence, skill and self-awareness. He doesn’t attribute these developments solely to his teachings, but rather to the rangatahi themselves and the holistic kaupapa Māori values that underpin the theatre’s programme.

“They have got this ability to live inside their imaginations more easily than some other people who maybe don't have that gift and that willingness.

“They've got this trust thing going on. And I mean, this is what drama does, doesn't it, it helps you move out of your comfort zone and into the world of creating another world, different from your own world. And investigating whatever the subject matter is inside that space.”

The expression and vulnerability inherent to theatre isn’t limited to the actual performances. Any issues with the subject matter or general struggles are openly discussed between practitioners and participants.

“We do check-ins at the start and end of rehearsals just to see where everyone's at and how people are feeling,” says Year 12 student Stephanie.

Te Rākau co-founder Helen Pearse-Otene is a clinical psychologist and her experience in the field has directly influenced the way the company approaches these group projects.

Open dialogue is welcomed and encouraged through a practice known as porowhita. These talking circles have been received well by students and goes to show the benefits of ako, explains Jim.

“We check that everybody's OK. And if they're not, we'll stop the process if we have to and try to resolve that.

“What I find interesting about it is everybody will start somewhere and by the end of the day they’re somewhere else. And usually, it's upwards, isn't it? It’s an emotional regulation tool and awareness tool. I think the acquisition of a tool like that is good for you at any time in your life.”

Aside from the creative practice, the rangatahi have found the subject matter engaging and different from their typical history lessons.

Much of the history and social studies curriculum around World War 1 and World War 2 has focused on ANZAC and the Nazi invasion, respectively. The participants’ knowledge of the Māori Battalion was minimal prior to their engagement with Te Rākau.

“We don't really touch on New Zealand's own culture. But we talk about every other country,” says Year 10 student Mareikura.

Stephanie adds, “We only learnt about very specific parts of the wars. Like the ANZACs and then in Year 10 we learnt a lot of stuff about the Nazis and that was about it.”

The newly attained knowledge and interest has fostered kōrero between some of the participants’ whānau, like Stephanie and her father.

“I learnt about this, went home and then found out I had an ancestor in it [Māori Battalion]. I told my Dad, and he was like ‘oh my Grandad was in that’.”

Isla speaks of how at her previous school in Auckland, much of the content in drama was on ‘imported’ plays.

“We didn't get to do many plays about our own country, if any at all. And so, coming here and getting to do a play, or a production that's based on our culture is really nice.”

Te Rākau has brought light to the fact the two subjects can work symbiotically with each other – that is kaupapa Māori and performing arts. The relevance of the project extends beyond the students' learning and is socially and culturally relevant to their communities where the plays are put on.

As The Battalion tells the story of young rangatahi going off to war, the students feel an inherent connection to the turmoil experienced by the characters they are portraying. It proves that the struggles of being a teenager are timeless and relevant, no matter the context.

The wider renewed interest in kaupapa Māori is beneficial to all of society. Placing indigenous culture at the forefront of all learning areas is something championed by Te Rākau. Jim sees the work of the company as “growing tomorrow's practitioners today”.

“They’re very young… I think that bodes well, possibly for the future of their involvement in drama at Ōtaki College, and maybe in life. Out of cohorts such as these come the future practitioners of creative processes in Aotearoa.”

Regardless of the educational components of the project, the rangatahi value the sense of belonging the experience has given them in a hard-to-navigate time of their lives. Mareikura is a newcomer to performing arts but will be an advocate for the programme long after The Battalion’s final curtain call.

“I'm just wanting younger people to experience this kind of openness and welcoming. You know, just wanting to be a part of something. Because we're pretty sure we were like that at first, you know, really afraid and wanting to find somewhere to belong.”

Performances of The Battalion are scheduled for early term 4. The group looks forward to showcasing their hard work, though are also saddened by the end of their collaboration with Te Rākau.

Jim Moriarty shares this sentiment but knows it won’t be the first or last time he witnesses success from this talented group.

“I watch with interest what happens to this cohort in how they evolve as a result of this experience.”

Rangatahi in Te Ūpoko o te Ika a Māui are deepening their understanding of kaitiakitanga through exploring local marine environments.

An eight-month dance project enabled tamaiti in a Samoan bilingual unit to connect more closely with traditional arts, and to gain confidence and pride.

An eight-month dance project enabled tamaiti in a Samoan bilingual unit to connect more closely with traditional arts, and to gain confidence and pride. Read more