With a pristine natural environment, Rakiura/Stewart Island’s tamariki are hardy and self-reliant. The environment is not only their playground, but also their classroom. 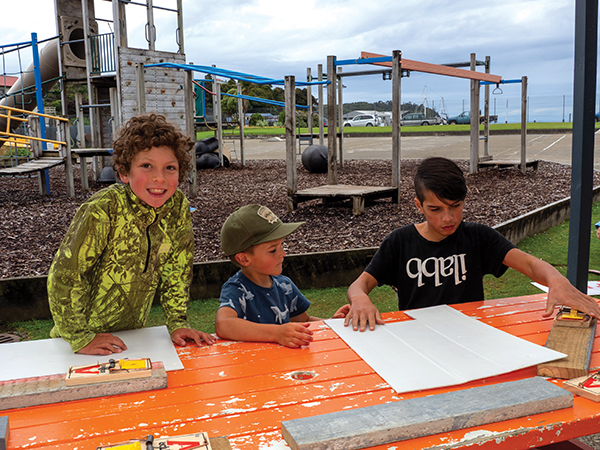 Principal Kath Johnson says Halfmoon Bay School is generally involved in three to four environmental projects at a time and tamariki are very engaged, whether it’s trapping rats or making pickle out of the bull kelp which fringes the coastline of Aotearoa’s most southern island.

In 2017, Kath worked for six months with DOC on Rakiura as part of the Royal Society’s Science Teaching and Leadership programme.

“It was cool to be able to try something different. Because I have been here for 14 years, I need to do things like the Royal Society’s programme to get out and get a break because otherwise I’m not fresh with new ideas, such as engaging community to get kids into science through meaningful projects,” she says.

The history, places and people of Rakiura are a major focus of the school’s local curriculum.

“The focus of the curriculum is around what we have in Rakiura. We do a topic for the whole year – last year it was Our Taonga – looking at all the treasures around us such as the marine reserve and Ulva Island.

“This year our topic is Our Body and what fuels it and we’re looking at where food comes from – fishing, crayfish, marine farms. The year before – it was Our Stories: the history of Rakiura,” says Kath. 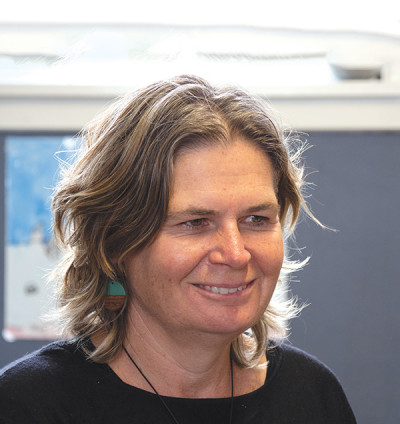 “The big thing for our board of trustees and our school as a whole is that our kids on Rakiura don’t miss out on things. So, we go out of our way to make sure they’re getting the best deal they can. We think they are, ERO thinks they are,” she says.

And the children agree.

Fionn (Year 7) moved to Rakiura from Cambridge with his family in 2018, when his mum Alison Fitzsimons applied for a one-year teaching position.

“It’s cool because there are a lot of experiences here – like we do snorkeling. Earlier this week we did a wharf jump for our triathlon training and we did a survival swim in our pajamas; and we do rat trapping and stuff and the penguin cams are probably the best things we do,” he says.

“I love that the environment is everywhere, especially doing the penguin cams because we get to see what the animals do and how they behave,” says Ava (Year 7).

“We do a lot of local curriculum. After a while I thought the kids would get sick of it, but they never get sick of the local stuff because they make so many connections with it,” adds Kath.

Since July 2020, the school has teamed up in a pilot scheme with the New Zealand Penguin Initiative and local environmental group SIRCET (Stewart Island/ Rakiura Community & Environment Trust) to observe little blue penguins/kororā at Ackers Point, near Oban.

“The initiative is nationwide, and they want to find out about little blue penguin/ kororā. We set up four cameras and every two weeks, the kids download the footage from the SD cards, then upload the data onto spreadsheets. They watch the footage, record the penguin, time, date,” explains Kath.

Richard Seed from the New Zealand Penguin Initiative says the organisation hopes to use the model developed on Rakiura and team up with community groups and possibly schools to monitor kororā around the coastline of Aotearoa.

“The kids are recording every observation they see from that video footage. It’s not just penguins – we’re also getting data on pest species. They are recording how many penguins they see, what time they see them and whether they’re going from the shore to the nest in the forest or going down to the sea from the nest. 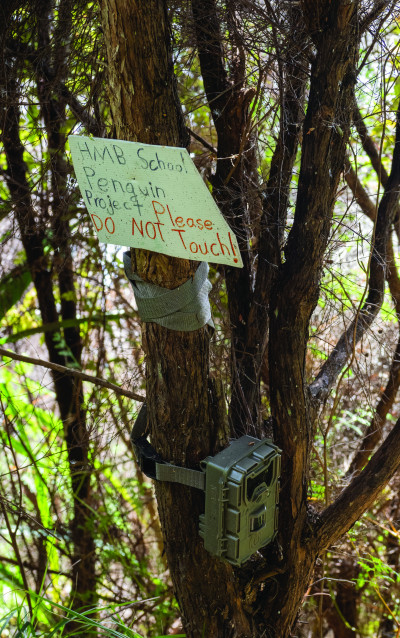 One of the four cameras set up by the school to monitor little blue penguins/kororā at Ackers Point, near Oban.

“There’s a lot of data entry which could be perceived as quite tedious, but there’s enough action with the penguin observations that it stays interesting. We’ve possibly been lured into a false sense of security here because the kids have just been so good. Their data entry has been flawless – they’re in tune with the environment,” he says.

Kath is a teaching principal who takes the senior class, which is doing the observations, three days a week in the 36-pupil school. She says giving children the opportunity to thrive in their own environment and see how they can contribute to a larger project builds their self-esteem.

“Yesterday Richard showed the children some analysis of the data they’ve been collecting and told them what the scientists had learned. They have learned that the penguins are breeding earlier on Rakiura than they expected. They also think they might be doing two breeding cycles because there’s been a bit of penguin mating going on in the video footage,” she says.

The project covers many areas of the curriculum, including gathering and interpreting data, using the evidence they gather, making and interpreting representations and engaging with science; science, maths and writing are key parts of doing this work.

“Last year for writing, the kids wrote manuals for going out and doing the penguin cameras and then a manual for putting the information onto the computer. The kids this year are using the manuals. That was great because that tied it right back into writing. It wasn’t just writing instructions for the sake of it, they are real-world examples,” says Kath.

Some students also used their writing skills when they saw in the video footage some people walking their dogs.

“The first lot of footage we got, they saw two people walking their dogs out there, which isn’t allowed. One of the girls wrote a letter on behalf of the class explaining what they are doing and that it’s not allowed because it’s endangering our native species. I followed it up with the person. 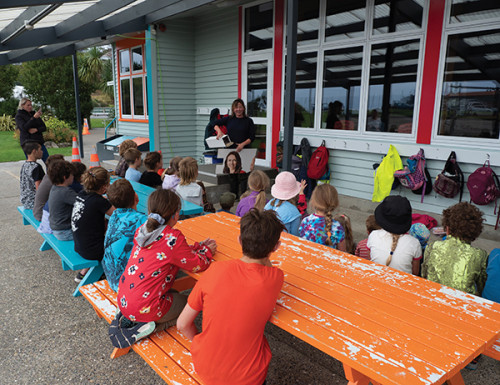 “Another dog was loose – we got the Police involved.
The kids showed the policeman the footage. It was a positive interaction for the children with the Police; he contacted someone at the Southland District Council.”

“Rose Bowman normally comes on a Friday morning from SIRCET. She takes a group of kids and they’re doing rat-trapping lines around the school, community centre and one up a bush track,” says Kath.

As experts about their whenua and environment, students offer their services to visiting schools from throughout the bottom half of the South Island as Stewart Island Ambassadors. They have made a flier that advertises guided trips to predator-free Ulva Island and a chance to contribute to Marine Metre Squared, a national database where children observe and record a metre of the shoreline. They also offer schools an opportunity to take part in the penguin project.

“They come for their camps and our kids will work as tour guides,” says Kath.

“Mostly they guide them around Ulva Island – our kids are trained by some of the professional guides. We are broadening that programme, so we take a school to do the penguin cameras: children show them the cameras and later the kids come back into our school and our kids show them how to look at the footage and input the data.” 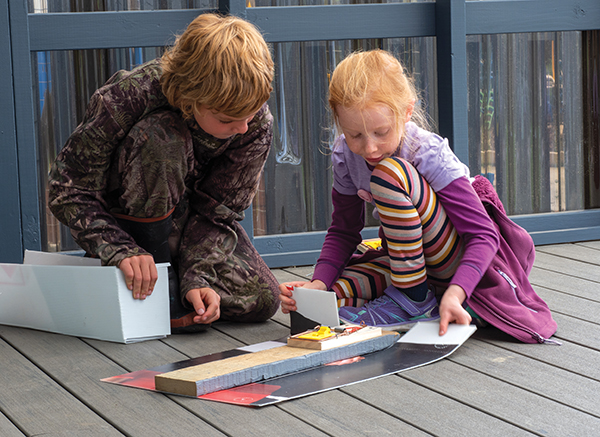 Ben (Year 4) and Alanna (Year 2) make a tunnel to hide the predator trap.

The good mahi doesn’t stop there. As well as making international headlines when Prince Harry visited Halfmoon Bay School in 2015, the school has featured in national media over the years including a story on RNZ about the film they made to protect predator-free Ulva Island/Te Wharawhara.

In 2019, children were asked to write about what the island would be like in 2050 when Predator Free Rakiura has achieved its goal for the main island to be free of pests.

Tai Simpson, aged 11, wrote that in the year 2050, she would be 44 years old and working as an ornithologist on the island.

“The most wonderful part of my job is that we have managed to save animals close to extinction. Such as kākāpō, magenta petrel, fairy tern, white heron, black stilt and short-tailed bat.

“I’m so glad that the right choices were made when we had the chance and what joy it brings me to be working in Stewart Island as I was brought up on the island as a child and had so many wonderful experiences,” wrote Tai for Predator Free Rakiura(external link).

Learn more about Halfmoon Bay School and its role in environmental projects.

Coloured markings have brightened up the grounds and inspired more physical and interactive play at Kamo School in Northland.

The introduction of tuakana-teina classrooms is transforming learning experiences for tamariki at Fruitvale School in West Auckland.

Reading for joy at Rangikura School

Coloured markings have brightened up the grounds and inspired more physical and interactive play at Kamo School in Northland. Read more

The introduction of tuakana-teina classrooms is transforming learning experiences for tamariki at Fruitvale School in West Auckland. Read more

Reading for joy at Rangikura School

How to manage behaviour in the classroom with Julie McDougall

Applications of the Power of The Vagus Nerve