Supported by her whānau and school, a passionate young wahine led a two-year campaign to get reo Māori instructions in her school lifts at Ao Tawhiti Unlimited Discovery School in Christchurch/Ōtautahi. 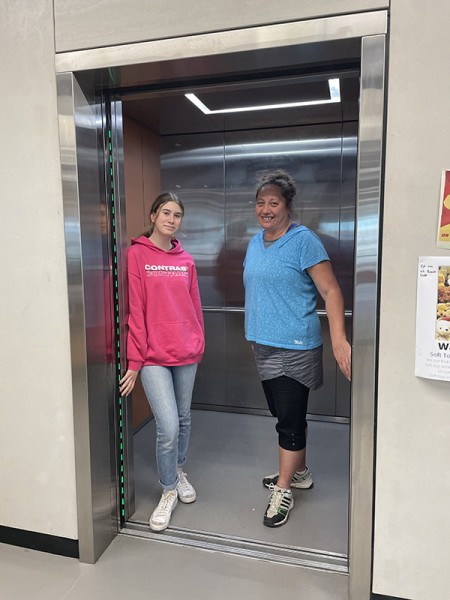 A mother and daughter conversation in a lift two years ago has had an inspiring outcome for everyday use of te reo Māori.

Rangimarie Te’evale-Hunt describes how her quest to get Māori instructions in the lift at her school began.

“One day Mum and I were in an elevator and she told me she spoke to a man who came to fix the elevator about te reo in the lifts. And, I was thinking, ‘why don’t we have te reo in the school elevators?’

That simple idea led to a mission of perseverance, student agency and consumer advocacy.

She is fluent in te reo Māori from attending kōhanga reo in Taranaki, then Whānau Ata immersion unit in Tāmaki Makaurau/Auckland.

Upon returning to Ōtautahi/Christchurch, she went to Te Kura Whakapumau and Te Pā o Rakaihautu until she started at Ao Tawhiti Unlimited Discovery school in the CBD in Year 9.

Her mother, Marlene Te’evale-Hunt, is the learning advisor for Filmmaking, Print Media and Te Reo Māori at Ao Tawhiti, and she says Rangimarie comes from a family of Māori and teacher activists.

How Rangimarie’s idea was realised exemplifies Ao Tawhiti’s legally designated special character – the students are central in directing their own learning, so the enthusiasm and love of learning is retained.

Rangimarie is passionate and determined – two qualities highlighted in the school values.

“I want people to want to learn more Māori and to be happy to have te reo in our country as it’s our native language,” she says.

“I had a hope, but I never thought it would happen. I thought it was an idea that people would push to the side, but I had support from all the teachers and my mum, in fact everybody in the school.”

Some initial research by Rangimarie in 2019 revealed that opposition to the idea because te reo Māori wasn’t permitted in lifts for health and safety concerns was misguided.

“I wrote emails to the building code people, Standards New Zealand, the Ministry of Business Innovation and Employment and my local MP Rino Tirikatene. I learnt [from Koro Rino’s office and the other documents] that there’s not any rules or law that says the lift voice can’t be in Māori.”

When she still didn’t hear back from the lift company about adding Māori messaging to the audio track in the lifts at Ao Tawhiti, Rangimarie’s next step was to enter the television programme Fair Go’s Consumer Heroes school campaign.

She wrote an entry hoping it would help turn her idea to reality.

“It’s so crazy as I was one of the winners,” she says. That meant a fantastic box of tech prizes was delivered to the school.

But that’s not before some lessons in patience.

Rangimarie’s voice message for the lifts was recorded in 2020. The lift messages were finally activated in June this year.

“I was getting hoha [irritated]. Te reo Māori is our native language and should be used throughout the country and definitely in elevators.”

All around the world lifts have directions in multiple languages, so New Zealand should too, she says. “It’s kind of sad that we don’t.”

Moving from Māori immersion schools to a school where Māori was not spoken widely had been a big adjustment, Rangimarie says.

“We always spoke te reo and I thought that was normal,” she says.

She has a real sense of accomplishment about the lift messages and the potential for other Government buildings to feature Māori in their lifts, too.

“It’s a passion of mine to get te reo out there. We use our passion at school.

“People have told me they are learning the Māori words and they want to learn more. That’s what I wanted as an outcome,” she says.

Once a stranger in the street even approached her, recognising her from Fair Go, and saying she loved Rangimarie’s message. Unfortunately, she also had to block out some racism along the journey. Nonetheless, Rangimarie is impressed with the support she has received.

“I couldn’t have done it on my own. I had people pushing for it. Our school has a special character – we do what we love. I have nearly passed Level 2 NCEA and I have done everything I love and more.

“I love that this school wants to have more Māori in it. And it’s crazy that my voice might be in Parliament Buildings!”

She has grown accustomed to the sound of her own voice in the lifts at the four-storey school. At first, she cringed and took the stairs out of embarrassment, but she quickly got over that.

Kapa haka for all

A recent focus has been the Regional Secondary Schools Kapa Haka Competition.

“I’m encouraging more people into kapa haka. This is a great school for the performing arts and it’s good to get people out of their comfort zone and to use more te reo Māori,” she says.

Rangimarie is not only performing; she and the other kaihaka (performers) voiced what they wanted in the bracket: to remember friends and loved ones lost and to show support to the rainbow community, especially to those who want to perform kapa haka as their chosen gender.

She also supports other seniors to teach kapa haka to junior students in her kura. 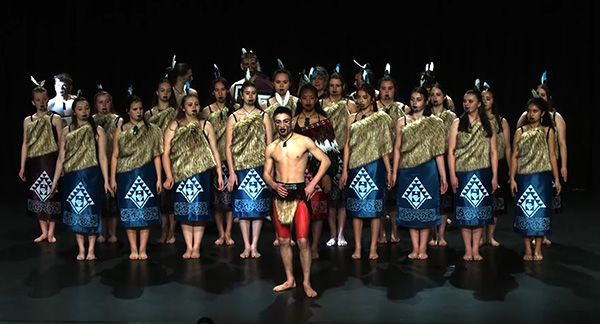 “We are really proud of Rangimarie and our rangatahi as a whole,” Ao Tawhiti director/tumuaki Anita Yarwood says.

“If we want rangatahi to move out of education with the confidence and skills to make the world a better place, then we need to create a learning environment that facilitates that.

“The Ao Tawhiti model with its high trust environment has a lot to offer.”

The school is working hard to increase its Māori identity, says Anita.

“It’s the responsibility of all of us to have more te reo around us every day,” she says.

“What I love about this school, that Rangimarie exemplifies all the time, is that we are not focusing on how many ‘Excellence’ credits the students achieve, but on their dispositions and characteristics.

“The students are confident to stand up and say, ‘Hey, that’s not right and that’s not what we want in our school. We need to do some something about this.’”

On her campaign, Rangimarie gained skills such as problem solving, working with different people, and managing difficult situations – even being interviewed was educational.

“Those characteristics are important in achieving success wherever students head after their school studies,” says Anita.

As well as as Te Reo Māori, Rangimarie is currently studying Dance, Physics, Maths and Education for Sustainability. 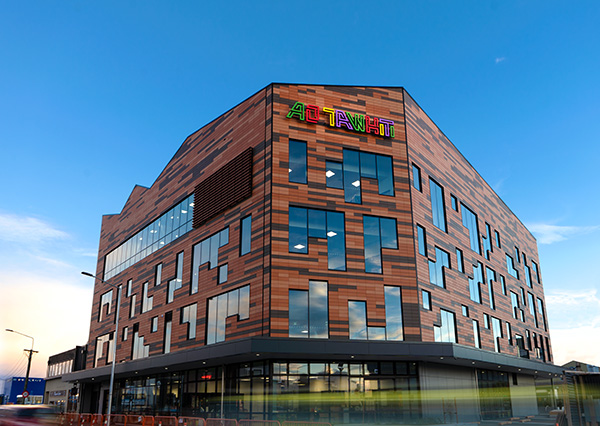 Ao Tawhiti Unlimited Discovery School is in the Christchurch CBD and is working hard to increase its Māori identity.

Māori Language Week will be held on 13-19 September this year.

A look at how the Ngāti Whātua Ōrākei Whai Māia response plan supported their hapū during Covid-19 Alert Level 4.

Tessa Moana Kake-Tuffley knows that she stands on the shoulders of her tūpuna and bears their hopes and dreams for an education system that works for Māori.

The signing of a Kawenata (partnership agreement) was a momentous occasion for Tūwharetoa, Raukawa and Waikato-Tainui (Ngā Iwi) and the Ministry of Education

Tessa Moana Kake-Tuffley knows that she stands on the shoulders of her tūpuna and bears their hopes and dreams for an education system that works for Māori. Read more

The signing of a Kawenata (partnership agreement) was a momentous occasion for Tūwharetoa, Raukawa and Waikato-Tainui (Ngā Iwi) and the Ministry of Education Read more