Diving for mōhiotanga: Local histories explored in the realm of Tangaroa 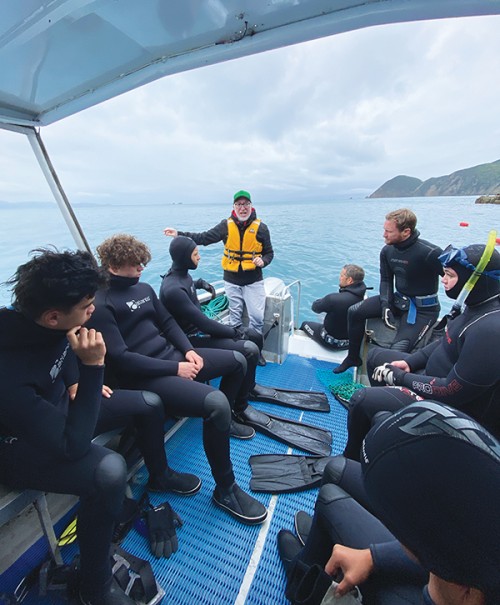 Students listen to history while preparing to go diving to collect kaimoana.

The school is now coming full circle with the development of a shared campus for the Girls’ and Boys’ Colleges.

Principal John Kendal explains, “It’s a really unique time in terms of where we are sitting with the co-location with the Girls’ college. It’s a real opportunity to connect.

“The community became engaged eight years ago, so they led the process. They want to see a co-located new school that captures both the traditions of the Boys’ and the Girls’ colleges, but with the flexibility for senior students being able to take subjects in both campuses.”

The strengthened iwi-kaiako relationships that occurred as a result of the project has helped Marlborough Boys’ to develop a course that embraces the principles behind the revised Aotearoa New Zealand’s histories and Te Takanga o Te Wā curriculum content. The course,
Te Waharoa, is one part of the curriculum that has been developed to support “Māori to achieve as Māori.”

John, who was welcomed in 2021 to Marlborough Boys’ College as their first Māori principal/tumuaki, says, “A real strength to the programme is that they get to see the local environments through a Te Ao Māori lens as we enter the realm of Tangaroa. We learn to respect the water and the sea and the dangers that can happen. I think drowning is still one of the highest fatality causes in New Zealand. It’s important learning all those aspects of tāhoe Māori environments so that you’re able to keep yourself and the group safe, and respect the environment.”

The course is available to all ākonga at the start of the year. While the majority of students taking it are Māori, there are also non-Māori who take it as well.

“It does appeal to those who have an interest in Māori learning, about the stories, and obviously the practical elements of going diving, kai preparation and all those sorts of things. It appeals to the Māori voice,” says John.

Te Waharoa caters for all levels of Mātauranga Māori, from those first starting their journey to those who are taking this to NCEA Level 3. “They all come out feeling safe, being heard, regardless of where they are on their journey,” says John.

He credits Dr Peter Meihana, senior lecturer in Māori history at Massey University, in helping to achieve this. 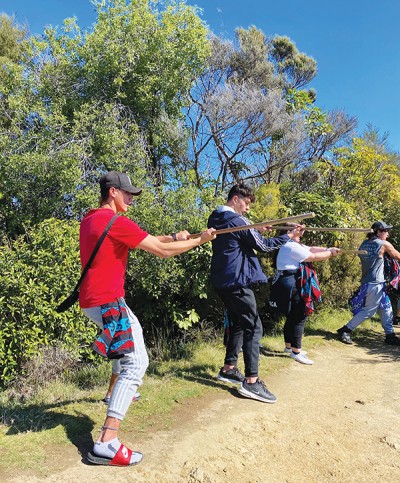 The course incorporates many aspects of Te Ao Māori.

Peter, a former pupil of the college, had his last year of study in 1992. He spent time on field trips that provided rich knowledge about the area and its history which generated his interest in local history. “We spent a lot of time walking about, studying history, getting out of the classroom,” says Peter.

Peter explains that the course was developed by Ben Christian, the te reo Māori teacher at the school.

“It started a few years ago. Ben discovered that amongst the Māori students there were those who were into the language and those who were very much into the history.  There were of course students interested in both, however,  Ben designed this course to cover the history and culture.”

When the two later became friends, Peter suggested incorporating more local Rangitāne and Māori history into the course. Rangitāne have been commissioning art works that narrate the history of the of the area for some time now.

Peter suggested that they take the boys on a walk from the college to the CBD to see and talk about the different stories. After the success of this, they decided to take it further. This decision coincided with Massey University’s involvement in the Aotearoa New Zealand’s histories project.

Peter explains: “As part of the research Massey historians worked with schools to get an understanding of what was being taught and any apprehension students and teachers had about the new curriculum. We took things a step further with Te Waharoa and included material that might add to students’ understanding of the past.”

This enabled Peter and Ben to put some more time and energy into widening the scope on that programme. It allowed them to build on what they had done and take the boys down into the Marlborough Sounds. 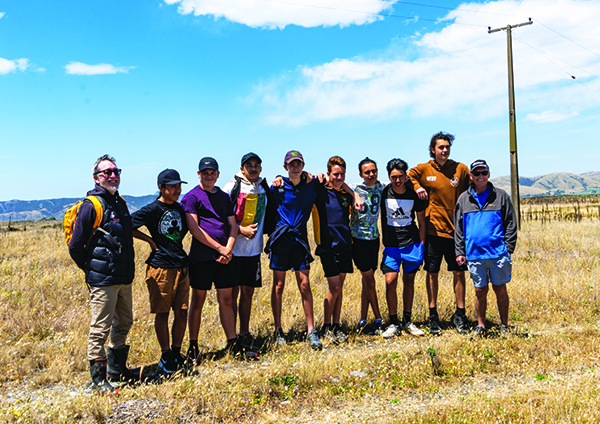 The students visiting one of the local sites of interest.

The Marlborough Sounds provides a rich source of both history and the ability to engage in harvesting as well as other learning opportunities.

John explains that the course is “first and foremost, around learning about the stories and the diving and the cultural elements to do with kai and food. But along the way, sometimes they can branch out to other areas like the Māori calendar, Matariki, and all those sorts of elements that guided us as Māori and still do.”

Ākonga learn about guardianship, customary permits, the idea of not taking more than is needed, as well as utilising the kai that is taken, such as re-using the shells from kai moana. They can obtain NCEA credits for the whole trip for various other subjects, including tourism.

The course weaves elements of traditional stories and history to help explain the current situation within Aotearoa New Zealand.

“We start with the Kupe stories, but also the area was historically a terminus. It was where people migrated south, so we talk about where people came from, why they left and what drew them to the south. We give them the full picture, but we don’t make it too in-depth as they are dying to get into the water,” says Peter.

Benefits of the course

Diving to collect kaimoana is a highlight for many of the boys, and the new environment can bring out strengths not previously demonstrated. 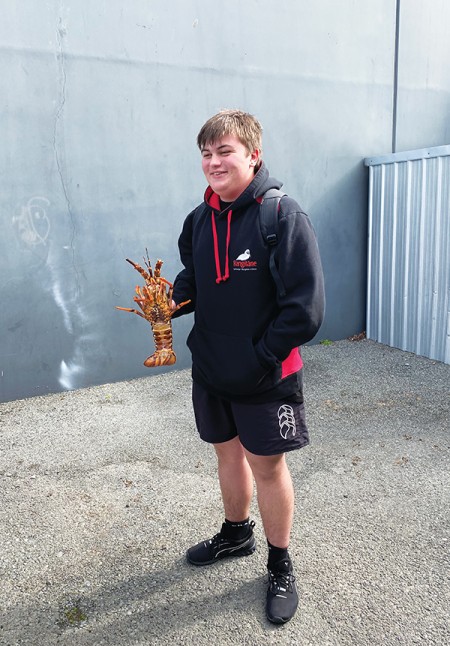 Ākonga learn how to catch and prepare kai.

“It’s interesting, many of these boys are my nephews, my young cousins, so I know them outside of school as well. Often, they are very quiet and reserved. When we got to the water we saw a different side of them, the boys who were quiet in class, stepped up and became quite clearly the leaders of the group… they were so confident. They were our hunters and gatherers, it was so great to see,” says Peter.

Te Waharoa demonstrates one way to embrace the histories curriculum through its use of the local environment and knowledge, and in a way that develops important skills for ākonga. It may also help to serve future learning needs by sparking a desire to become cultural leaders, says Peter.

“Those with an interest take up the challenge and tell it to others. We need to replenish ourselves to make sure those stories are being told by us.”

Peter says supporting more kaiako Māori who have local connections will be important for developing the new curriculum as there will be a lot of pressure on iwi to help schools and kura.

When starting to develop the new curriculum, John suggests starting small to make it manageable and to encourage staff to also undertake a learning journey. His own journey of learning the local stories has been assisted by parents and former pupils.

For John an important aspect of the new curriculum will be encouraging whānau to come in and help and get involved.

“To me it is about engaging with your whānau, hapū and iwi. The area of local curricula has been missing for a long time through a lack of knowing what those traditional stories have been.

“Our iwi, whānau and hapū, want our boys to see themselves in our curriculum, and I think this programme is a leading light in terms of what we need schools to offer in terms of the practicalities and the enjoyment.”

Education Gazette looks at how an Auckland kāhui ako is developing its local histories curriculum from their maunga, Te Pane o Mataoho.