Dunedin’s Arthur Street School has welcomed newcomers to Aotearoa since 1848, with about 28 different nationalities currently represented at the school. 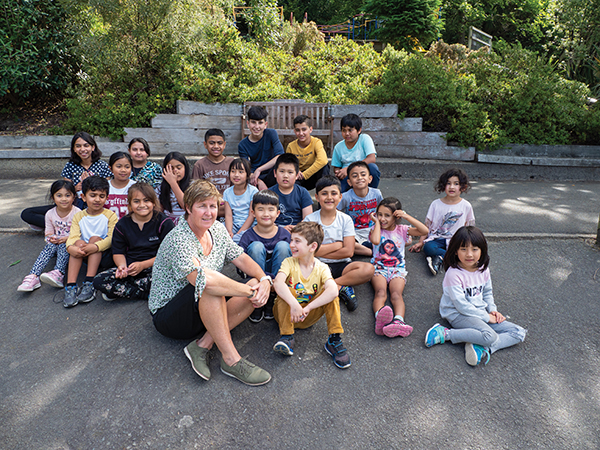 Kim Blackwood with some of the children who represent the diverse nationalities at Arthur Street School.

Dunedin’s inner-city Arthur Street School is the city’s oldest school, established before the first group of immigrants on board the second immigrant ship to arrive in Dunedin, the Phillip Laing, set foot on shore.

On arrival, the school was transferred to a waterfront site where it was known as Beach School.

In 1864 the school was shifted to another central city site before it was opened on its present site in 1877 and renamed Arthur Street School. A gold rush in the Otago province during the 1860s caused Dunedin’s population, and wealth, to increase dramatically, and demand for schooling increased.

In February 1880, the Otago Daily Times reported that many of the city’s schools had seen an increase in attendance, with Arthur Street School reportedly jam-packed with an average of 520 pupils.

On 19 February 1883, the newspaper published a letter from a parent whose son was turned away, and wrote that the headmaster had ‘turned away at least 20 children already that day’. 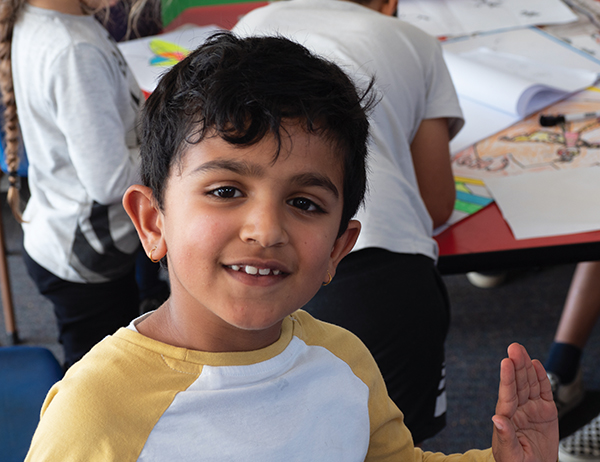 Arush has found a warm welcome at Arthur Street School.

Today, Arthur Street School’s roll sits at a comfortable 200+ pupils, an increase of about 90 tamariki in five years. A school zone was put in place at the end of term 3, 2020.

Principal Kim Blackwood says one of the features of Arthur Street School’s community is its multi-cultural nature.

“We have done a fantastic job to be able to support our different ethnic families and they feel comfortable and supported. They then talk to others within their communities and before we know it, they’re knocking on our door.

“Parents choose this school because of what we can offer and what our children are exposed to, such as the different cultures and nationalities: people want their children to be involved in that,” she says.

About a quarter of the roll are ESOL students, which includes eight former refugees.

ESOL teacher Janine Cotton is passionate about her job.

“The former refugee students, in particular, may have had a very unsettled education and it hasn’t always been in their first language. Some can put it together, but for others, it’s just very confusing. I hope our means of teaching makes some sense and that it’s fun along the way. I don’t want children to not try in case they get it wrong,” says Janine.

“Oral language is picked up quite fast. That for me is the priority, that they’re able to ask questions, make friends, express what they need or want. Then the reading comes and eventually the writing. Some learn very quickly and for others it’s difficult – depending on how much education they’ve had where they came from,” she says.

Mirna, Janine, Rasha and Mahmoud in the school’s ESOL room.

Janine is supported by Rasha Ali, a bilingual interpreter, who supports Arabic-speaking children in seven Dunedin schools. Her role includes interpreting for the children and liaising between the school and the families. While they believe that most former refugee children seem reasonably well settled, Rasha knows what their families are going through.

“I have been here for four and a half years. I am Palestinian; I was born in Iraq, and after the war there, I lived in Syria, then spent seven years in Cyprus and then lived in Thailand before coming to Dunedin.

“I enjoy the work here because I’m translating all the time in Arabic. I feel that I’m helping them,” she explains.

Mahmoud (13) and Mirna (11) are both originally from Syria, although they have little memory of their homeland, having done their schooling in Lebanon before arriving in Dunedin. With the help of Rasha, they tell Education Gazette that while everything was different when they arrived in Dunedin, they find it easier to learn. Both believe they can have good futures in New Zealand.

“Here it will be a better future for me; I will learn a lot. The teachers’ way of teaching helps me learn. I want to be a builder,” says Mahmoud. 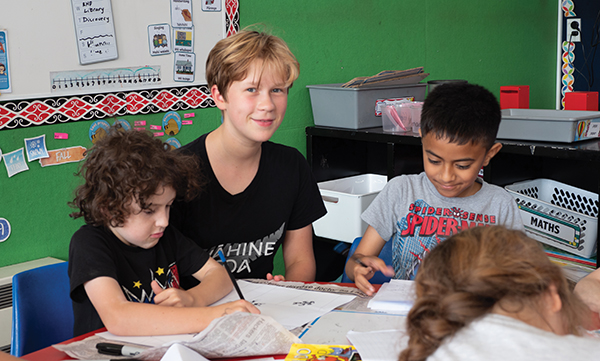 Experiences like school camps, which most Kiwi children take for granted, can be challenging for newcomers to Aotearoa – particularly former refugees.

“It’s been a steep learning curve. I guess depending on what they’ve been exposed to, families being divided, can mean awful things.

“We put together photobooks from previous school camps and we try and answer a lot of their questions way before the kids go to camp. While at camp, teachers will send some text messages and pictures of their kids to reassure the parents,” says Kim.

“Rasha and I have done a lot of work preparing the families for camp, explaining what camp is about, providing photo charts of what they need to pack for camp. There’s some anxiety around the activities, but for most families, their primary concern is the separation,” says Janine.

Arthur Street School is on the doorstep of Dunedin’s Town Belt – 202 hectares of regenerating native forest, with panoramic views across the city and harbour.

The school uses this rich resource in a variety of ways, such as involvement with other schools located along the Town Belt in a kaitiaki pest eradication programme.

“It’s not for everybody, but for those young people who are passionate about conservation and the environment, it’s a fabulous opportunity,” says Kim.

Esme, aged 12, has been at the school since she was five and was one of the founding members of a group called Town Belt Kaitiaki (TBK) which is dedicated to preserving the Town Belt.

“I love the Town Belt and how natural it is here and there are so many native plants,” she says.

The Town Belt has also inspired a science perspective, which is now embedded through the whole curriculum.

“It was initially a way of engaging boys, but now we do it across the whole school. About three or four years ago, we were writing charter goals and looking at our data. Writing is one of those goals, especially boys’ writing. We decided to make a bit of a change. How were we going to get these boys involved? We worked out it needed to be more hands on.

“It’s very easy to teach in isolation, particularly when there’s so much to cover and so we had to get smart about what that looked at, and that’s where the science framing came from. It’s a very wide curriculum that we have to get across. It’s about pulling it back in locally to what’s important to us,” explains Kim. 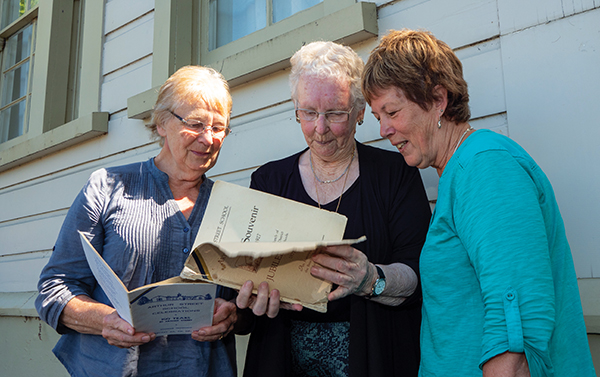 Fiona, Jan and Sandra look at some books featuring the history of the school.

When Sandra arrived in 1993, the school was welcoming Cambodian students – mostly refugees.

“It’s very diverse – it’s a very accepting culture. When you go out in the big wide world, that’s how the world is: you want children to have empathy. I’m still in contact with some Cambodians who live in Australia – they have lovely memories of Arthur Street,” she says.

Fiona is in her 10th year as a teaching assistant.

She began working with ESOL students, but now largely focuses on helping students at, or below, curriculum expectations for literacy and numeracy.

“It’s a good school because I think we’re very well managed. It’s an interesting school because you have quite a cross section of children and it gives the others an understanding of different cultures,” she says.

“I just loved it because I still had my professional colleagues, which was really important and I still had contact with the children, but I didn’t have the responsibility for them.

“If you meet children outside the school, they are very proud that they went/go there. There’s a deep-rooted loyalty,” she says. Arthur Street School with Dunedin and the harbour in the background.

With the Town Belt at its back, an historic reserve to one side and Otago Boys’ High School just down the road, there’s not a lot of room to expand.

But the school is in the preliminary design stages of a complete rebuild. Most of the buildings date back to the 1960s and principal Kim Blackwood and her team have the challenge of developing a fit-for-purpose school to last 50-100 years.

Kim says the school community has a preference for single-cell classrooms over open plan learning environments.

“I think single cell classrooms help us cater for that diversity of needs, because it’s very easy to get lost in a crowd. If you’re already somebody who is struggling and there’s so much going on – how can you be sure that you’re giving the best to those children.”

The new build also gives the school an opportunity to build a solid foundation for its digital technology curriculum. She says while the school is unlikely to become a one-to-one device school, the children of tomorrow need digital skills.

“We’re right at the start of going back to basics and underlining what our digital curriculum will look like. With a school of this age, everything has been an add-on and an afterthought.

“It’s all very well having the devices but you’ve got to have the infrastructure to be able to support that. At the moment, every device that you put on this current system just puts more pressure on it. Classes find they keep dropping off, whereas I know with the new build, that’s not going to be an issue.”

ONLINE – Strategies and Tips for Teacher Aides, with Kerry Upson