Curriculum of awe and wonder

The digital design and technology lab at Wellington’s Newlands Intermediate hums with learners developing and playing games, collaborating on a photo editing project or teaching themselves how to create a 3D model for printing.

Newlands Intermediate’s digital design and technology teacher Marianne Malmstrom began teaching the subject in the US in the early 2000s. She says it was quite daunting in those days as there was no curriculum and no map.

As she was developing a ‘roadmap’ for teaching digital technology, she realised that what students were doing outside school was much more complex than the lessons she was planning.

“It took me on a rather extraordinary journey. I thought I was designing really good lessons, and yet what I saw them doing with digital tools in those spaces like Minecraft and virtual worlds outside of school was a lot more sophisticated than what I was planning for them. So I learnt to really start co-constructing my lessons with kids.

“When I came to New Zealand I brought that knowledge and then I had the luxury of the beautiful New Zealand Curriculum and the key competencies that really provide a framework for what I was observing with my work with the kids,” she says. 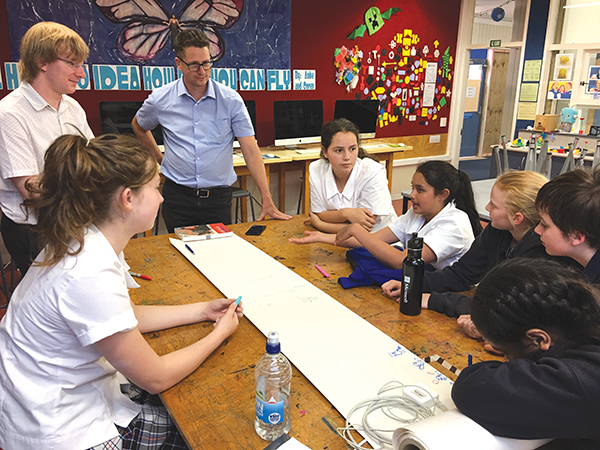 Theta developers Ryan Sumner (left) and Jim Taylor (right) meet with the MiniDevs to discuss a proposed design for a Mixiply project.

Marianne knew Newlands Intermediate was the right school for her when principal Angela Lowe asked her if she could design a digital technologies curriculum for the school that would fill students with awe and wonder. The school introduced its digital design and tech programme about four years ago, says Angela.

“I really didn’t know what it was going to look like or what I wanted it to be. So the key to it was employing teachers who wanted to take a risk, wanted to try something new and go in a new direction. And since then, by and large, I have let everybody have a free rein.

“The key to the success of a programme like this,” she explains, “is to have a wide range of staff, not just people that have really good knowledge about software and hardware and devices, but to have somebody who has a clear vision of what digital technologies learning might and could and should look like.

“Our school staff are at all different stages of the continuum. The concept, philosophy and direction of the new digital technologies curriculum is something that everybody wants to embrace,”

How technology teaching and learning is included as part of their local curriculum is described on the school’s website.

“All our students have the opportunity to extend their learning in the technology curriculum. This currently includes Food Technology, Digital Design Technology, Visual Art, and Hard Materials. The emphasis in these curriculum areas is on the design process.” 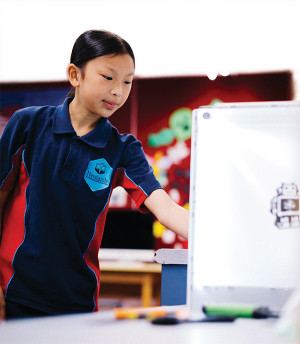 Sophia’s 3D digital model becomes a real-world artifact after being sent to the 3D printer.

Students in Marianne’s classes can create their own lesson plans.

“My whole objective is to get the kids in a space where they recognise they can create their own knowledge, they can get themselves unstuck and can even make their own lesson plans. Sometimes they feel a bit relaxed in here because they get so much choice and they will want to try something new the first time the learning gets hard. I send them back to their lesson plan and ask: ‘What’s your objective? Have you met your objective? If not, get back to work!’

“It’s all about students respecting themselves as self-directed learners and developing their capacity to persevere and not be intimidated by the unknown,” she explains. 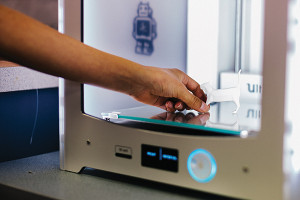 Year 8 student Sophia taught herself how to 3D print a model of a cat.

“I started off from scratch and I used the 3D software called Blender and I was interested in animals so I decided to make a cat. I didn’t know anything at the start and I had to watch YouTube videos and teach myself at home. I love how you can choose whatever you want – what interests you and basically just have fun and create things you never thought you could do. I think I would like to be a doctor – but maybe a game designer, because I think that would be quite fun,” says Sophia.

Breaking out of the silo

Marianne says education in the 21st century needs to break out of its silo and partner with a wide range of people and organisations. She has observed a growing divide between the way schools run as they always have and a rapidly changing world – and is keen to bridge it.

“We have got to all figure it out – it’s the Māori concept of ako, which describes a teaching and learning relationship where the educator is also learning from the student. Educators’ practices are informed by the latest research and are both deliberate and reflective. Ako is grounded in the principle of reciprocity and also recognises that the learner and whānau cannot be separated.

“Everybody has to be at the table and have a voice: our students, the outside world, non-educators, educators. I think when we embrace that space, we will figure out where to go next. I’m very excited about the possibility. That’s why I’m in New Zealand – you are curious, interested and already have some structures in place to pursue that.” 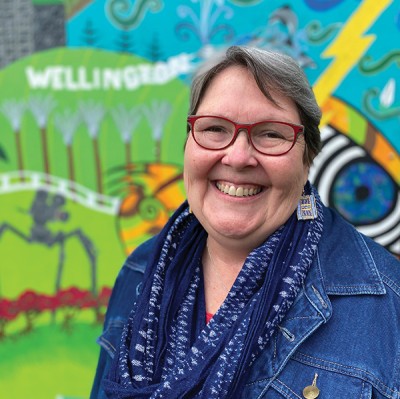 Eager to bring the real world into the classroom, Marianne was delighted to team up with Jim Taylor from software and analytics company Theta Innovation Lab at a Techweek Hackathon held in Wellington in 2017.

“I had asked developers to develop a sandbox platform that will help kids create their own content. That really resonated with the developers and we teamed up and actually won the hackathon. Jim kept working on a prototype and came back to me six months later and said ‘Theta wants to build this, but we will only do this if we can do it with the kids’.

“I couldn’t believe it – never in all my experiences working with developers has anybody asked the kids ‘what would you design?’ It’s been the most incredible partnership for the students, for me as an educator and for the Theta developers,” she says.

Mixiply – a platform for making AR/VR games and apps for multiple devices – was the result and the team at Theta benefited from
co-designing with students, says Jim.

“We learned not to make assumptions. We saw that we needed to create a creator’s platform. The kids were really keen on using digital tools and models and it broadened our scope into a digital maker space tool,” he says.

Theta has continued to collaborate with Newlands Intermediate through involvement in the MiniDevs(external link), a team of students who work with developers from Theta on the Mixiply platform. The MiniDevs are keen to see other schools give their students opportunities to create their own content to learn.

Building relationships with people and companies from outside school has brought a whole range of new things into the school environment, says Angela.

“With groups like MiniDevs we have 11-,12-,13-year-olds working with outside developers to produce things that are marketable and commercially savvy.” 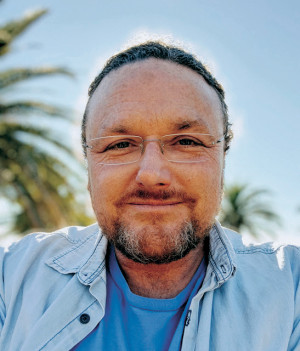 Matt Richards has jumped the ditch from Australia to work with schools around New Zealand to help develop their learner agency and digital fluency.

The accredited facilitator of professional learning and development (aka Village Robot(external link)) is working with teachers at Newlands Intermediate to help them develop the digital technology curriculum in innovative ways using a project-based model.

“Digital technologies teaching and learning loses its magic and potential if looked at as another silo in the curriculum. The potential of all of these new technologies and pedagogies is how we can breach the silo to make learning authentic and connected to the real world,” explains Matt.

For example, rather than teaching a session on learning how to do Google presentations, Matt suggests that students may have an idea for a project that requires funding. “They might need to make a really persuasive video – that brings in literacy and persuasive text and all of this is wrapped in an authentic project that has real purpose and meaning,” he says.

Matt says the potential to make a difference in the world is exciting and he is particularly impressed with the New Zealand concept of ako, which gives teachers space to move out of their comfort zones and be learners alongside their students.

“If you can do projects with kids where they are having some success at looking at solutions to local problems at the community level, then I hope they will feel empowered to become involved in projects further afield.

“This new way of learning, by helping a student discover their learner agency, is empowering them to become active world citizens in the future.”

“The central challenge is not to predict the future but to prepare for uncertainty. This is best achieved by developing in individuals the capacity to adapt successfully to changing situations” (p. 3)