Community and school rise to challenge of flooding

Last month’s deluge and flooding threatened to plunge the otherwise idyllic east cape into a nightmare – or it may have done, had the community not rallied.
And while some members of the Tolaga Bay community may have been isolated physically, they certainly weren’t cut off from each other. 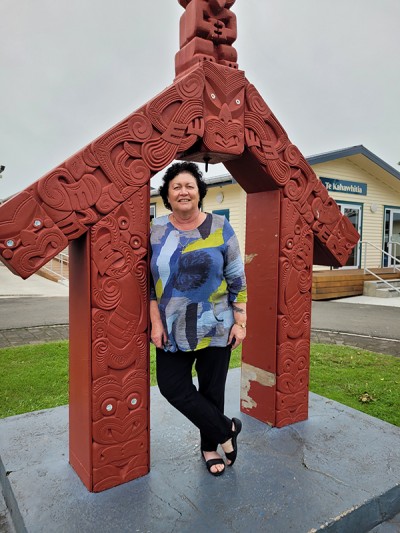 On the night of 22 March, the heavens opened over the east cape in some of the worst weather since Cyclone Bola.

The Hikuwai River rose from normal levels of about 1.5 metres to well over 12 metres, and a section of the bridge over the Mangahauini River was wiped out by floodwater, bisecting the Tokomararu Bay township. Power went out for hundreds of people.

Roads were closed across the Hawkes Bay / Tairawhiti region, and 24 schools and 27 early learning centres were forced to shut.

One of those was Tolaga Bay Area School & Kahukuranui, which acted as a Civil Defence base, and where principal Nori Parata doubles as Uawa deputy Civil Defence officer.

“It started raining at 8 o’clock at night and by about 10 we realised just the sheer torrential rain and the thunder and the lightning was like nothing I have ever experienced, it went on for hours,” Nori says.

Several staff at Tolaga Bay Area School are also involved with Civil Defence. And the school quickly became a hub as it played host to Civil Defence operations.

“I felt we looked like the White House’s bunker room,” Nori says.

“We had TV screens, rainfall and river levels and news and Civil Defence CDM on screens all over the place.” 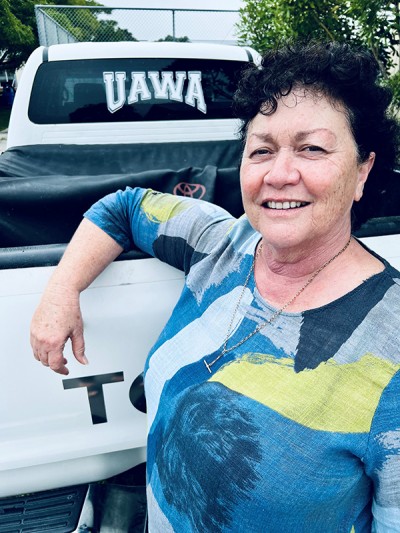 The priority was to evacuate points in our community that need to get out quickly, such as Mangatuna – the same place near the Hikuwai River where the banks were breached during Cyclone Bola.

Nori says some families messaged to say they had already moved out. But by 10.30 others were already trapped.

In that case, Nori says, it is best to stay put rather than risk a dangerous escape.

Nori says the school’s close ties with Civil Defence are useful because they have contact with families.

Getting information out is vital in such a situation. And although technology helps facilitate this, you cannot necessarily rely on it.

Telecommunications started to waver and mobile calls became impossible. Fortunately, the school has an old-fashioned landline, and the Uawa Civil Defence Facebook Page became a central point of communication for the community. 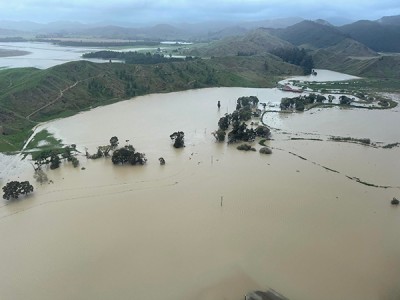 Scenes of the flooding

The timing of the flooding presented challenges. It coincided with increased outbreaks of COVID-19 on the east coast and the additional challenges that presented. It was a perfect storm.

“We were in the throws of COVID and we were certainly hitting out peak when the floods started, Nori says.

“We had positive cases of staff and students and parents became very cautious about the virus, thinking about whether to send their kids to school or not and there was a pervading sense of foreboding about the pandemic. “

So, the school switched to online lessons for two weeks. Attendance went up to 90 percent. Then the same week the students returned, the floods hit.

The school closed again for two days, opening on the third day to let parents concentrate on flood issues, and give the students back a sense of routine. Although many could not attend.

Road closures and flooding meant access was restricted. But a silver lining was the systems already in place for the distribution of devices and hard pack materials.

The school was certainly not caught off-guard. 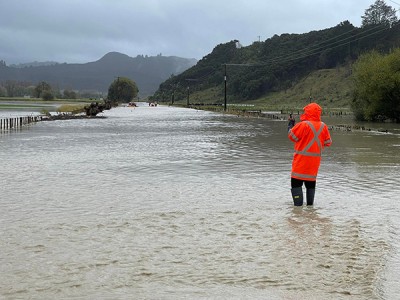 Scenes of the flooding

Nori says Civil Defence does a lot of proactive work, to lessen the challenge to the community, and to their own workload.

This involves giving the community plenty of warning and making sure community members have an emergency kit and a safety plan.

For the community is no stranger to an emergency.

The east cape lives with the possibility of a tsunami, and that became a reality last year.

So, the school has emergency plans in place and holds regular drills.

“We’ve got a river beside us and a beach out the front of us. On a perfect day we’re in paradise, but if there’s a tsunami warning, we have to move quickly,” Nori says.

“We’ve had to do that before and we’ve even had to do it while NCEA exams were going on. So, all sorts of things get thrown at you.”

Nori says evacuations during a drill usually take about 20 minutes. But when it wasn’t a drill, they did it in 14 – indicating the students could grasp the seriousness of the situation. 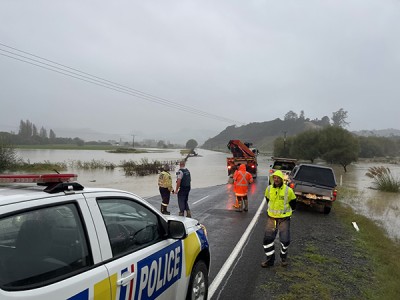 Scenes of road closures due to flooding

And although some of the younger students can get anxious, it was amazing how the older ones helped them. It was one of the benefits of being an area school catering to a wide age-range.

This reflects how the community helped each other out in general. And Civil Defence and the school community were central to that.

“It’s nice because the community does appreciate us,” Nori says.

“People who joined our Civil Defence page went up by about 400.

“People are brining in soup and scones and hot dishes, which tells you they do appreciate Civil Defence.”