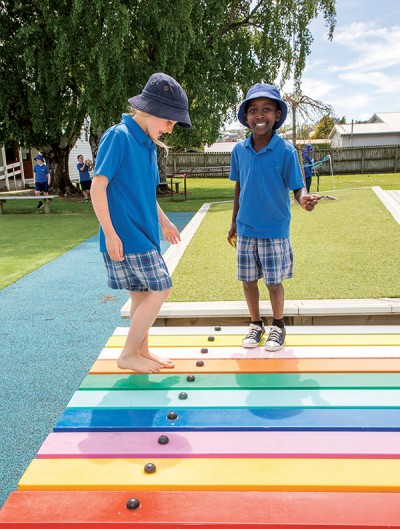 The playground at Balclutha Primary School is now a happy place for tamariki and teachers alike.

The Covid-19 pandemic, the 2020 lockdown and some significant staff changes meant a lovely school with good support in place was very unsettled, which led to playground mayhem.

Vicki paints a vivid picture of the situation a year ago.

“We saw lots of unpredictable behaviour in the playground. There was fighting, some inappropriate language and lots of really physical aggressive behaviour.

“Teachers were very anxious about being on duty. The principal never actually got to sit and have lunch during lunch time, or leave the school grounds, because there were always fires to put out,” says Vicki.

“She adds that it was probably only five to 10 percent of students who were exhibiting this undesirable behaviour, but it was having a large impact on the school.

“We were a little overwhelmed, to be fair. We needed something to pull together all the really good things that were happening in the school. As the school had previously started its PB4L journey, we were able to build on that foundation and add momentum,” explains Vicki.

There are 170 children and 23 staff at Balclutha School, including eight classroom teachers.

In Vicki’s previous principal role for 11 years at Te Kura o Popotunoa Clinton School, also in South Otago, PB4L had been implemented in 2019. It had a significant positive impact on the school culture and was embedded slowly over a few years, so she knew the programme worked.

Vicki and Katie refreshed PB4L at Balclutha School, where it had been started a couple of years ago but had stalled due to Covid-19 and staff changes.

Assistant principal Heather Willocks is an integral part of the resulting turnaround, as her experience added the important dynamic of institutional knowledge of the school and the community and the context of the groundwork done previously.

The leadership team’s emphasis over the course of 2021 was to clarify and consolidate that groundwork with a variety of improvement strategies. It’s been very effective.

For example, in the first two terms, seven students were stood down. The last stand down was at the beginning of term 3.

“Since term 3, the behaviour has really, really improved. We’re really proud of our students and the staff,” says Vicki.

One major change was to increase the number of teachers in the playground at breaks to three, sometimes more.

“Initially that was because, oh my goodness, this playground was really challenging. We needed more support for the teachers out there.

“We’ve kept that number up because it’s now just a lovely place to be. And teachers can go out and they can play games with the kids. They’re not actually spending their time trying to sort disputes. They’re enjoying the children and facilitating the learning in the playground,” says Vicki. 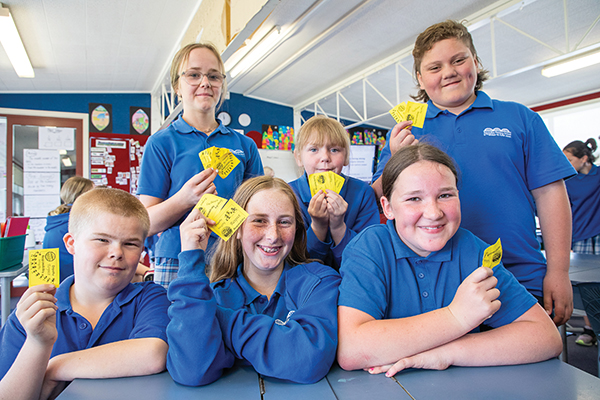 Another strategy was to redesign the discipline flowchart of what would happen if there was inappropriate behavior.

Student voice was important and Katie achieved this with a group of boys with tier two and tier three behaviour difficulties – the challenging boys who were constantly in Vicki’s office.

The students had true ownership of the new flowchart and the student council reviewed it and gave feedback on such things as what is major or minor behaviour and what deserved something like a name on the board or a written warning or a verbal warning.

The school values were simplified to responsibility, respect, empathy and integrity.

Golden tickets are awarded to students exemplifying the values and rewards are distributed every week.

To acknowledge and celebrate staff collegiality there’s the sunshine box of appreciation, with tickets with colleagues’ names and their good deeds. These are shared on a Friday and there is a special prize draw.

Focusing on the positive and celebrating all the wonderful things that the children are doing has helped with the school/home relationships. Staff enjoy contacting parents and sharing the positives from school as opposed to just making contact when there has been an incident.

With Covid-19, communicating is a bit harder without school assemblies and parents on site, so Facebook and Seesaw play an important part in the communication.

Some refined analytics also enabled the success of the PB4L framework.

The incident tracking system was refreshed to record the what, where and when of behavioural issues so hotspots were identified and they could work out when and where extra staff support was needed.

Knowing which days and times were more problematic empowered the teachers.

“Katie and I are very lucky because when we arrived here, there was already a really well-established staff culture. There’s such a genuine desire to do the best to ensure every student succeeds. What we didn’t have was a consistency of approach and that’s what PB4L has helped clarify,” says Vicki.

All teaching staff and most support staff did Understanding Behaviour Responding Safely (UBRS) training to increase their understanding of why a child might be presenting with this behaviour and how to support them.

“We wanted all of our team to see students through a strength-based approach instead of a deficit,” says Vicki.

It meant moving away from punitive strategies to concentrate on building relationships with students.

For example, instead of a teacher dealing with difficult behaviour by removing a pupil from the playground, that student now walks around with the duty teacher, which becomes an opportunity to build a one-on-one relationship.

“Every time that happens, we end up having these lovely conversations with children, and that makes them feel safer and more comfortable – it strengthens relationships,” says Vicki.

“What we’ve got in place now is the students have strategies to problem solve, or the teachers can help facilitate how can we solve this problem before it gets into a fighting niche. 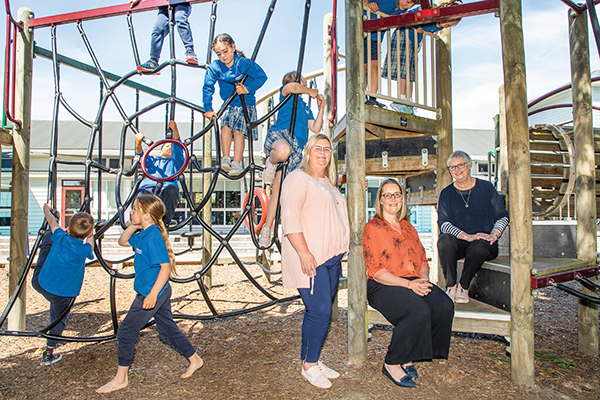 A side benefit of the PB4L programme is staff have identified a significant number of students who needed learning support. These are now being monitored as part of the support register.

Vicki and Katie praise the work of Max Gold, a PB4L facilitator for the Ministry of Education in Dunedin.

They were also helped by a wraparound support team of community agencies including their Ministry behavioral team and educational psychologist Jacquie Tonks, the Resource Teachers: Learning and Behaviour (RTLBs), the public health nurse, and local mental health providers.

“The change in our whole school culture in the last year has been really significant and I think the key has been a consistent approach to behaviour as part of our school-wide implementation of PB4L. It’s made our school a great place to be and to learn for everyone. I honestly can’t stress how grateful I am about the impact it has had on our school,” says Vicki.

Balclutha School will spend another year consolidating tier one of PB4L in 2022, then look at progressing to tier two in 2023.

“We have made lovely progress, but it is a journey that takes time and we don’t want to rush it,” she says.

Students at Roxburgh Area School have been making authentic connections with local organisations and businesses, as well as learning a range of skills

Students at Roxburgh Area School have been making authentic connections with local organisations and businesses, as well as learning a range of skills Read more